Several dozen of Koopman’s emails were taken from the Montana Public Service commissioner’s work account and later posted to the website of Northwest Liberty News under the headline “Roger Koopman’s Work Email Laid Bare.” Much of the email was work related, but there were also communications with family.

Documents obtained Friday by The Gazette through a public records request indicate that Koopman’s fellow Commissioner Randy Pinocci, of Great Falls, had been making extensive requests for Koopman’s email in 2019. On Nov. 20, Pinocci filed an agency request for records with the Department of Administration in which he asked for all of Koopman’s emails from Jan. 1, 2019, to Nov. 20. Pinocci did so again Dec. 9.

It's still unclear who released the emails to Northwest Liberty News, but two days after the letters posted, an interview aired with Pinocci about guns, tribal water rights and U.S. Sen. Steve Daines. Pinocci, a Republican from Great Falls, was familiar with the site.

Pinocci’s paperwork also bears the signature of Brad Johnson, chairman of the Montana Public Service Commission. Johnson told The Gazette he never signed off on the records request, that someone had used his signature stamp without his knowledge, though he wouldn’t speculate who.

“I did not know that Commissioner Pinocci had requested those emails,” Johnson said. “The signature, when I went back and looked was, my stamp.”

The chairman’s story is contradicted by a PSC legal counsel memorandum, acquired through a public records request filed by The Gazette. The report is attached to the online version of this article. 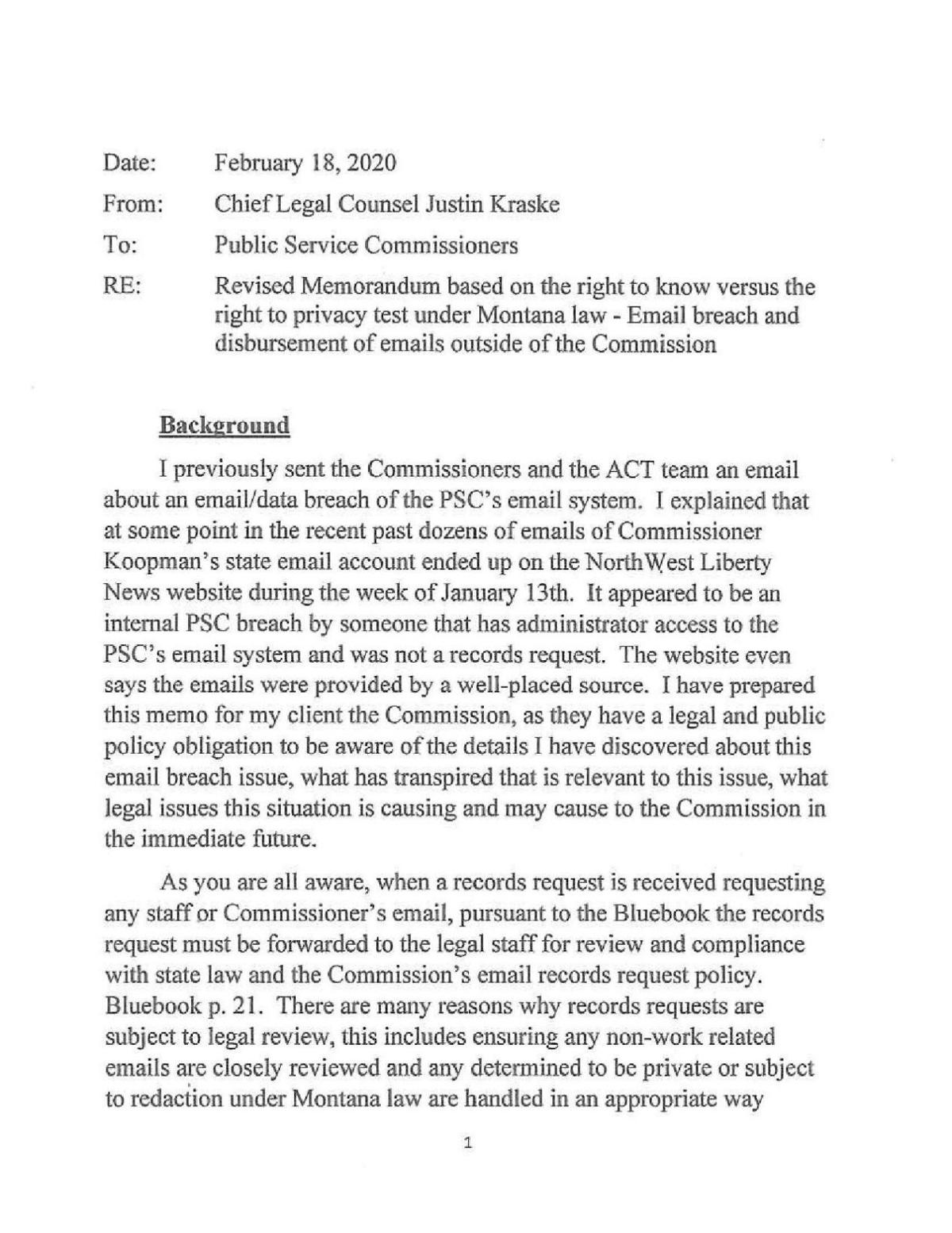 Pinocci didn’t return messages placed to his office phone and cellphone during business hours Friday. He left a message after hours Friday night, but didn't leave a phone number. He was still not answering his cell phone, or office phone.

Relationships between commissioners have been deteriorating for months as Koopman, in his last year as a commissioner, has become a dissenting voice on matters ranging from commissioner spending on travel to the commission’s majority being, in Koopman's opinion, overly accommodating to the state’s largest monopoly utility, NorthWestern Energy.

The PSC is charged with balancing the needs of monopoly corporations with the interests of Montanans who have no choice but to be captive customers of a monopoly. Commissioners, all Republican, are elected. Their annual pay is about $109,000.

The email eavesdropping was a new low, Koopman said, noting that the commission had become increasingly dysfunctional in the past year.

Two things of note have occurred during that time. Johnson assumed chairmanship of the commission. And Pinocci, elected in 2018, was seated.

“I would say that we’re just turning into a den of thieves. It’s getting that bad,” Koopman said Friday. “It’s actually theft of our information and all this spying and infighting, it’s created a commission that cannot trust one another and cannot work together.”

Koopman said he had no idea Pinocci was collecting his emails and only recently found out. The memorandum issued by PSC Chief Legal Counsel Justin Kraske indicates that Pinocci wasn’t the only one accessing commission emails to the surprise of others.

“I was also able to determine that just recently the commission’s communications director,” Drew Zinecker, “was given IT access to all five commissioners’ emails likely without most commissioners’ knowledge since around the time." Zinecker “started working at the commission, which was almost nine months ago in May 2019,” Kraske wrote. Zinecker’s name is redacted in Kraske’s memorandum, which is why it does not appear in quotes in this article. Despite the redaction, he is easily identifiable in other documents concerning Koopman’s emails.

“It appears likely that the commissioner email access (Zinecker) currently has may even allow him to write emails directly from all five commissioner accounts, which would appear to be coming from them directly to staff, constituents, and members of the public.”

Johnson hired Drew Zinecker, a legislative staff member of the Republican state Senate majority in May 2019. Koopman had been critical of the hire because the commission wasn’t consulted. Later, conflict arose over the way PSC business was being communicated to the press.

On Oct. 30, 2019, the PSC approved a $6.5 million rate increase for NorthWestern Energy customers. It wasn’t until two days after the rate increase that the PSC sent out a press release about its votes that Oct. 30, but in the release there was no mention about the rate hike. The commission also normally posts videos of its proceedings, but there was no video of the rate hike session for at least a week after the vote.

Koopman contacted the press, inquiring why no media had reported the rate increase. When he learned that no press release had been sent out by the PSC, he issued his own.

Pinocci’s first request for agency records came a day after newspapers published a Koopman opinion column accusing the PSC of putting politics ahead of the public's interests. In addition to bearing Johnson’s official signature, the Nov. 20 request also directed the state Department of Administration to send all Koopman’s emails to Zinecker.

The second Pinocci request for agency records came a day before NorthWestern Energy announced plans to buy an additional 25% of Colstrip Unit 4 from Puget Sound Energy.

Koopman had been critical of NorthWestern’s Colstrip plans. In a dissenting opinion on the utility’s general rate case, he called the commission’s 2008 decision to add $407 million of Colstrip debt to customer rates, “in hindsight, one of the worst, most anti-ratepayers actions ever conceived by the PSC — resulting in an inflated cost of debt, and inflated rate of return and a fixed rate base roughly two-and-one-half times what NW actually paid for their interest in the plant.”

NorthWestern had spent $186 million in 2007 paying of the leases associated with a 30% share of Colstrip Unit 4, after which customers were put on a 30-year payment schedule for $407 million at 8.25% interest.

Koopman’s dissenting opinions and op-eds in the Montana press received negative responses from his fellow commissioners.

Within the PSC, reaction to the release of Koopman’s emails wasn’t sympathetic.

“Just on Friday, Mr. Zinecker sent an email to the entire commission making light of the email breach and appeared to state that Commissioner Koopman had it coming and deserved it,” Kraske said in his memorandum.

Johnson was dismissive about Koopman’s emails being accessed without Koopman being aware. He said that government emails were public. Government employees and elected officials are told regularly that emails can be made public.

The chairman also said that despite the email eavesdropping, and disagreements with Koopman, the commission was functional.

"Between commissioners it’s not all sweetness and light, but we are in fact getting the work done, the staff is functioning fine. This is not preventing us from doing our due diligence," Johnson said.

Kraske, who is supposed to be the gatekeeper for the public information at the PSC, isn’t as cavalier about releasing information. There’s a public right to know, he said in his memorandum. There’s also an individual right to privacy, which needs to be protected through redaction, of which there was none for the emails shared with Northwest Liberty News.

In the Koopman email dump, Kraske identified “three very personal emails that impacted non-state employees.” None of the information about those people was redacted by whomever shared the information.

Koopman has hired attorneys and is considering litigation.

Kraske’s report also differs from Johnson’s description of the PSC chairman’s role in eavesdropping on Koopman. The Department of Administration had identified Johnson as the one who asked for Koopman’s emails.

Johnson told PSC legal staff that commission’s centralized services administrator either made the request or assisted the chairman in filling out the application. Johnson said the request was made on behalf of another commissioner.

The biggest redaction in Kraske’s memo obtained by The Gazette concerned the legal implications of allowing Zinecker to have the access to read commissioner emails and send emails on commissioner accounts.

“The list below is just an initial list of my myriad of legal concerns about” Zinecker “the communications director being assigned and granted full access to commissioners email accounts without their knowledge,” Kraske said.

The memorandum then went black with redaction for more than three pages. 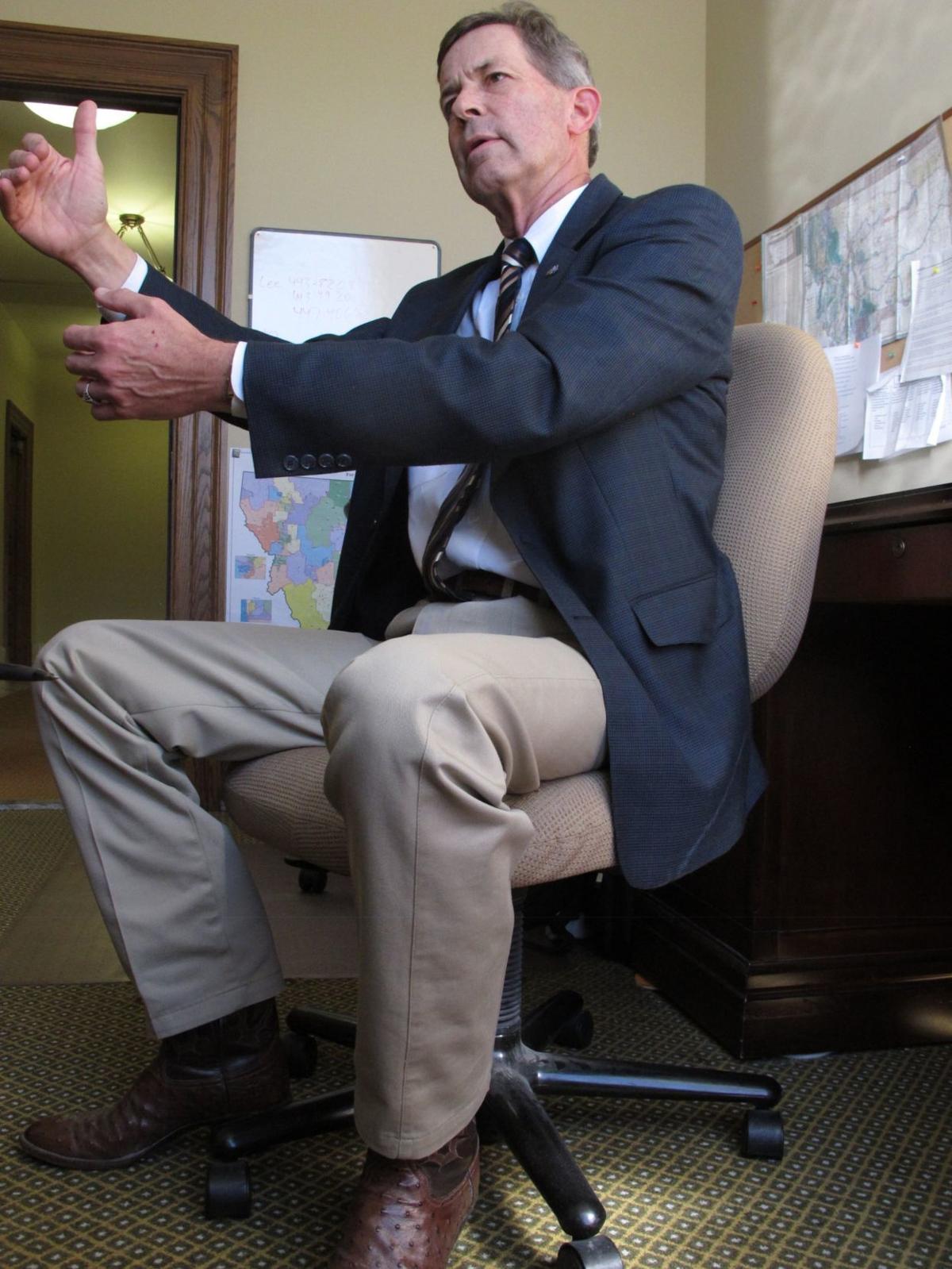