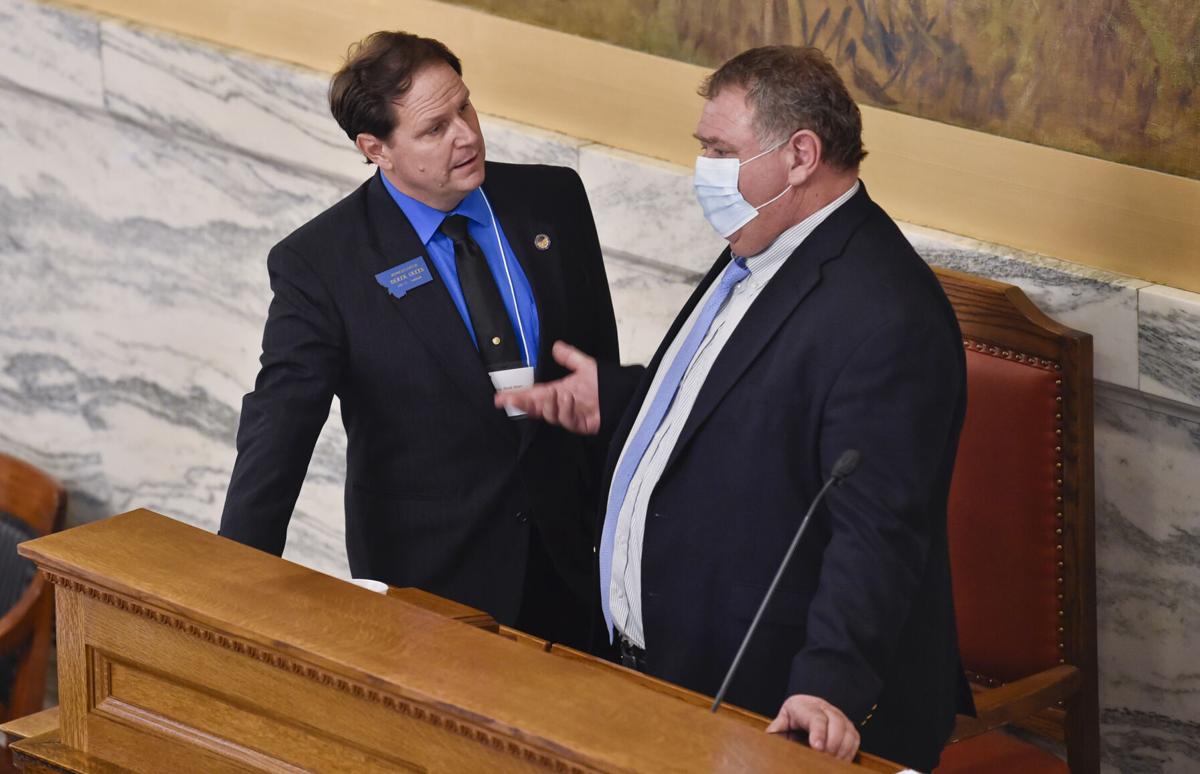 Rep. Llew Jones, R-Conrad, right, talks with Rep. Derek Skees, R-Kalispell, before the start of the house Republican caucus meeting on Nov. 18 at the State Capitol. 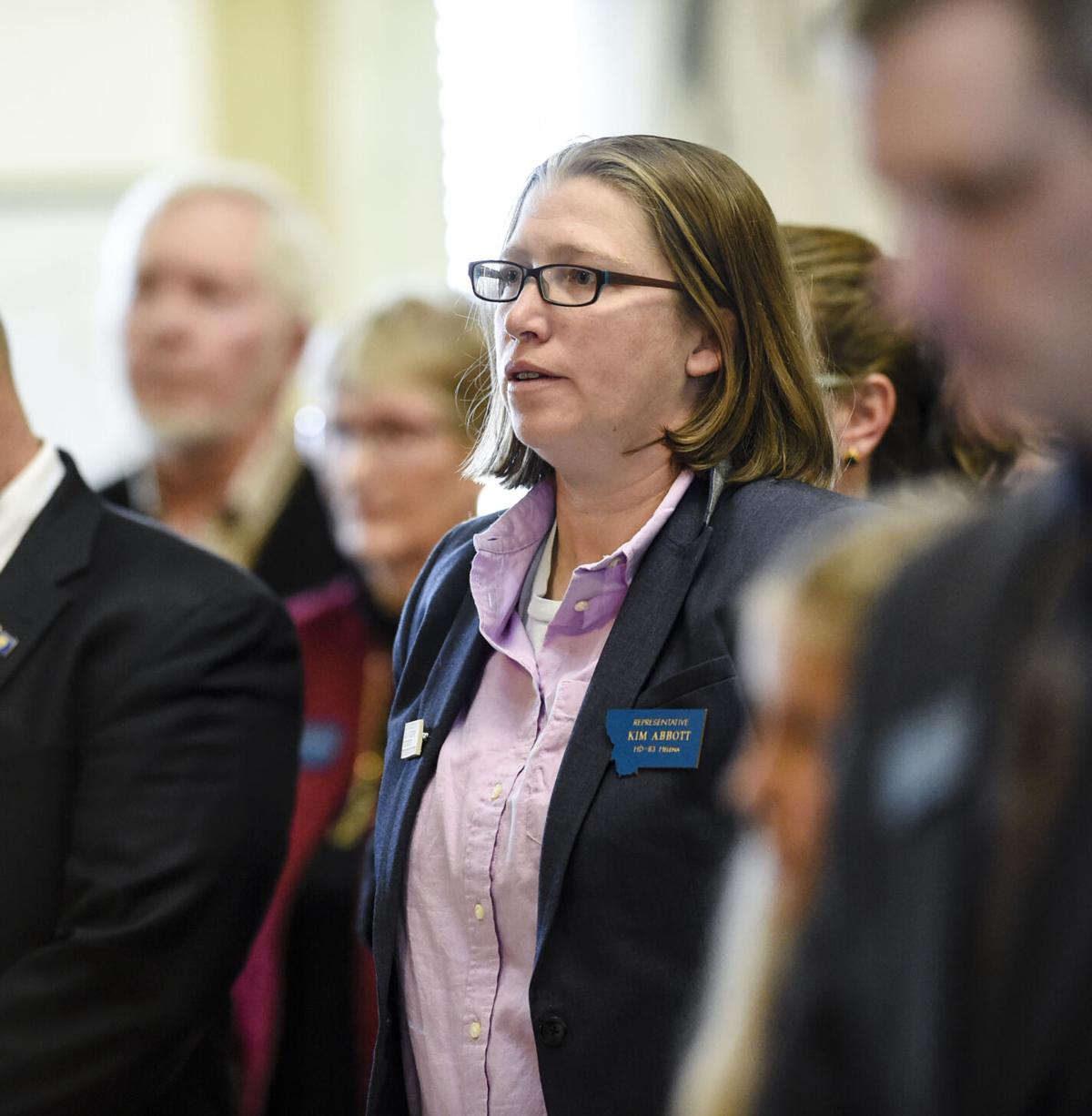 Rep. Kim Abbott, D-Helena, stands on the house floor in this IR file photo from 2017.

With few exceptions, Speaker of the House Wylie Galt picked those with experience for the jobs he assigned them when making standing committee chairmen and chairwomen appointments for the upcoming legislative session.

"If you were a chair (in the previous session), you kept your chair. If the chair was empty and you were a vice-chair, you moved up," Galt, a Republican from Martinsdale, said. "After that it went on seniority, without anyone having multiple chairs."

Rep. Llew Jones, a leader of the moderate faction of Republicans in the House, will lead the powerful House Appropriations Committee. He was vice chair of the committee last session.

Jones is also a longtime lawmaker who has twice chaired the Senate's counterpart, Finance and Claims, and is a major architect of the state budget bill.

"When Wylie Galt was running for speaker, he shared with us it was going to be all about merit," Jones said. "It looked like he did his best, and whoever was senior and had the most time or previous experience was the chair. I know there's lots of folks who would have liked to see something different, but he lived up to what he said he was going to do, and he has done as good as he could possibly do to try to treat both sides completely fairly."

One of the sides Jones referenced is the so-called "Conservative Solutions Caucus," of which Jones is a leader. That group has crossed the aisle in years past to advance major legislation, such as Medicaid expansion and bonding for infrastructure projects.

That's come at the ire of the other side, which sits farther to the right. In the House they've given themselves the name "38 Special," a reference to the number of lawmakers in their group last session, as well as a bullet caliber.

A major question of the upcoming session is how united Republicans will be. The party is coming off winning every elected statewide office in the November elections, strengthening their majority in the Legislature and recapturing the governor's office for the first time in 16 years.

Galt said Wednesday while he wants to build consensus as speaker, it's never possible to please everyone.

"I think it's like anytime you've got a big group, everyone's angry," Galt said.

State Rep. Kim Abbott, a Helena Democrat and House minority leader, said her party felt they got a fair shake in the appointments, which are made by the speaker on the House side. In the Senate, committees are voted on by the Committee on Committees.

Committee chairs hold the power over scheduling for bill hearings and votes in their groups. That means they have the ability to effectively kill a bill by not scheduling it for a hearing or vote before key deadlines. They also run their committees and set much of the tone for the work done in those groups over the 90-day session that starts Jan. 4.

The House committees where the chairs return from last session are:

The committees where the vice chairs became chairs are:

Rep. Steve Gunderson, who was previously on the House Natural Resources Committee, moved up to become chair after the previous chair was termed out and the vice chair moved to the Senate.

Rep. Joshua Kassmier, who served on House Agriculture last session, moved up to become chair. There, the past chair was termed out and the past vice chair was elected speaker pro tempore this session.

The Senate committees where the chairs return from last session are:

The Senate committees where the vice chair moved up to become chairs include:

Skees will also continue to run the powerful House Rules Committee, an on-call committee that will play a critical role in determining how the session runs this year in a pandemic. Sen. Cary Patrick became chair of the Senate Rules committee after serving on it last session, but not in a chair or vice chair role. The past chair was termed out and the previous vice chair remains on the committee. That committee is set to meet in early December to help determine how the upcoming session will function given the pandemic.

Biden issued an executive order Jan. 20 requiring the use of face coverings on federal property and lands, something Gianforte said didn't make sense for Montana.

The four bills aimed at reducing access to abortions all passed the committee on a 12-7 party-line vote, with Republicans for the legislation and Democrats opposed.

Some businesses pausing campaign contributions after riot were Daines donors

Many of the large corporate donors said to be reconsidering campaign contributions after false allegations of election fraud fomented an assault on Congress, had been contributors to Montana Sen. Steve Daines’s election bid.

"I don't think it will create chaos," Rep. Bill Mercer, R-Billings, said after a lengthy round of oppositional testimony. "I think it's good policy."

It went down on a 49-51 vote Tuesday, with five GOP representatives moving to vote against the bill.

The bills drew intense debate on the House floor, which followed contentious hearings last week in the House Judiciary Committee.

Democratic Sen. Jill Cohenour’s Senate Bill 109 would allow a judge to revoke hunting, fishing and trapping licenses for up to two years for someone convicted of trespassing either onto private property or closed state wildlife management areas in order to collect antlers.

"We've said from the beginning of the session that we're here to put good policy ideas out and to work hard to gain support for them," said House Minority Leader Kim Abbott.

Republican Christi Jacobson, elected to the Montana Secretary of State's Office in November, said Friday she considered HB 176 to be "very important legislation."

Two women who brought up race in a legislative hearing on a bill to ban sanctuary cities in Montana were shut down Tuesday by the committee chair.

Rep. Llew Jones, R-Conrad, right, talks with Rep. Derek Skees, R-Kalispell, before the start of the house Republican caucus meeting on Nov. 18 at the State Capitol.

Rep. Kim Abbott, D-Helena, stands on the house floor in this IR file photo from 2017.