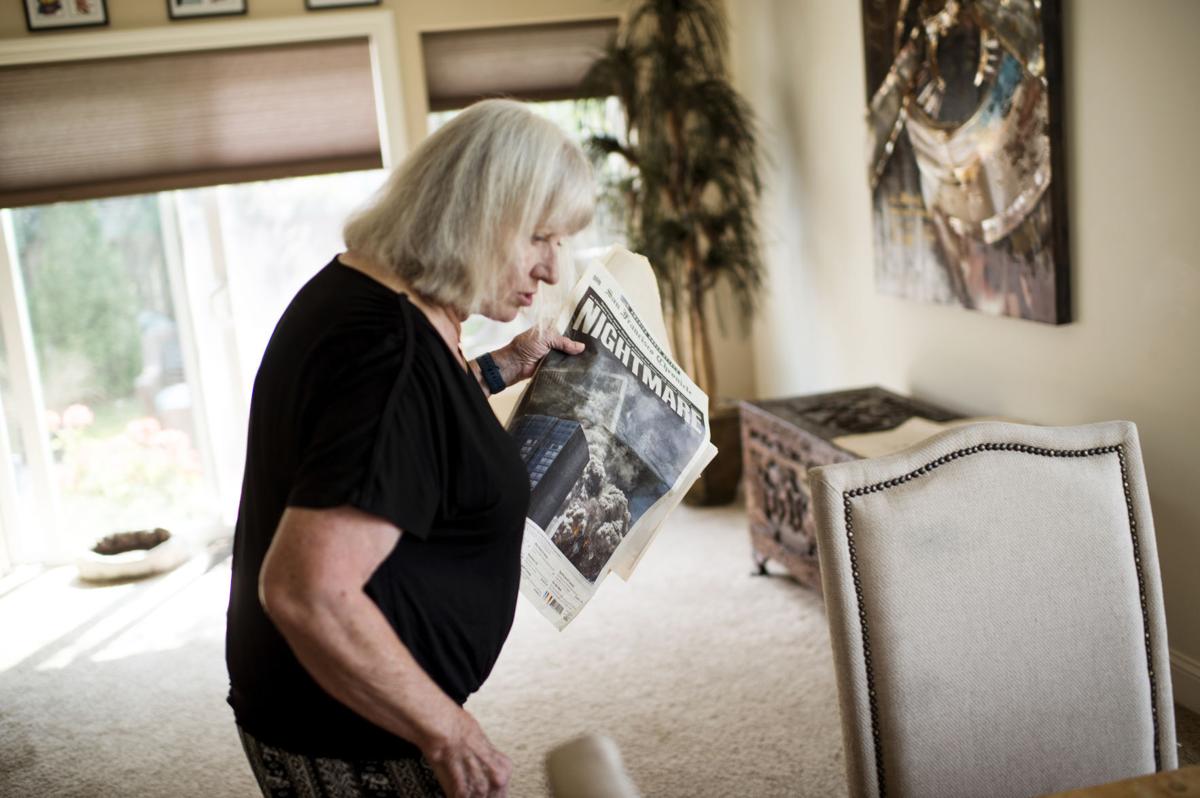 Mandy deGignac, a flight attendant on the first flight into New York City on Sept. 14, 2001, after the attacks on 9/11, holds an original copy of the San Francisco Chronicle from the attack, on Sept. 2 in Bozeman. On the front page is a photograph of the towers falling. 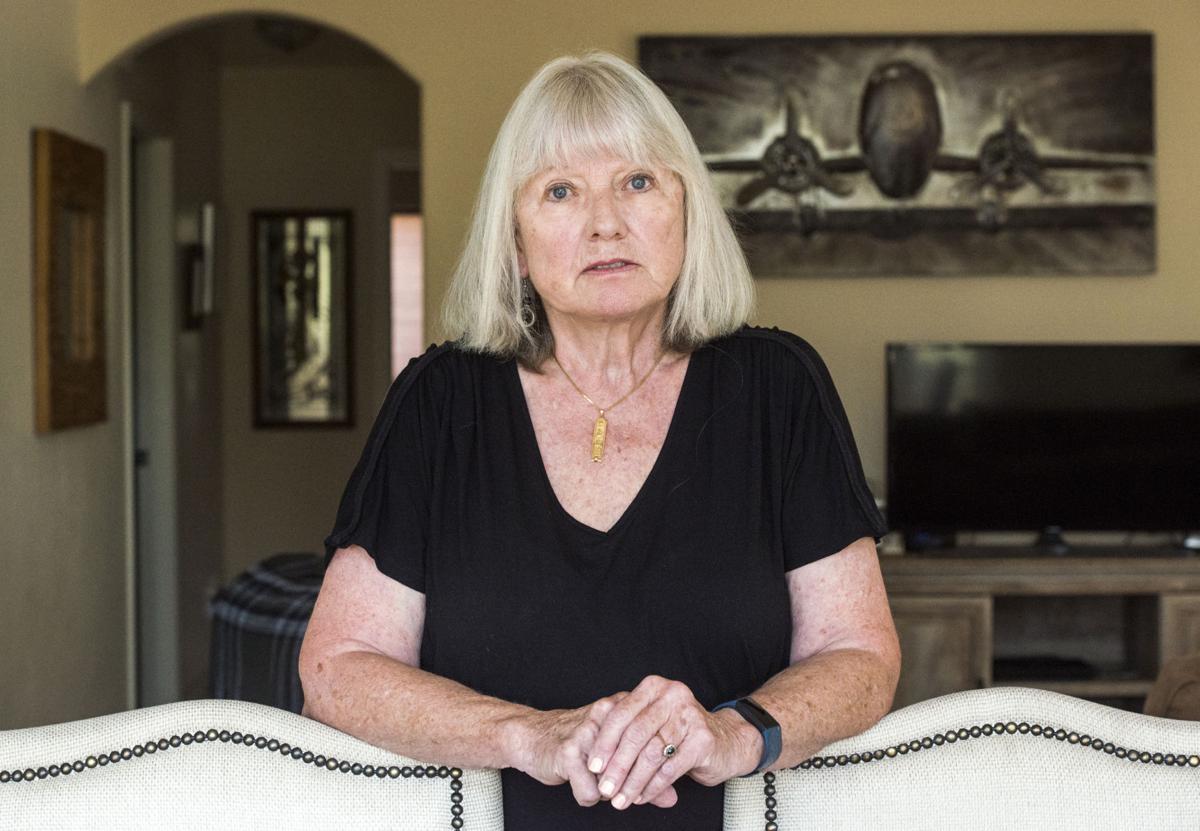 Mandy deGignac, a flight attendant on the first flight into New York City on Sept. 14, 2001, after the attacks on 9/11, stands for a portrait in Bozeman. She said that the pilots were allowed to circle the wreckage from the attack and saw the still-smoldering building.

BOZEMAN — Mandy deGignac's urge to collect newspapers struck while she was still in San Francisco in the days after the 9/11 attacks.

A flight attendant for United Airlines, deGignac had been working on the morning of Sept. 11, 2001, to ready a plane for a trip when someone got on the loudspeaker and told everyone to get off the plane — immediately.

DeGignac and the rest of her coworkers got off the plane and made their way to a crew lounge in the airport, where they watched the horror unfold in lower Manhattan, Washington, D.C. and Shanksville, Pennsylvania, when they found out the plane that crashed into a field in western Pennsylvania belonged to the same airline they worked for.

"There must have been 30 or 40 people, flight attendants and pilots, all glued to this television," deGignac told the Bozeman Daily Chronicle. "Nobody was saying a word. We walked in and nobody said a single word, and then we saw the whole thing happen on the TV."

Airline travel stopped across the country immediately following the attack, leaving deGignac and the rest of her crew stuck in San Francisco for days.

It was then that she picked up a copy of the San Francisco Chronicle from Sept. 12, showing the south tower of the World Trade Center as it collapsed in Manhattan, with a one word headline: "NIGHTMARE."

Above that: "Terrorists mount their most brazen and devastating attack in history as hijackers turn four passenger planes into bombs — and change America forever."

She still keeps that page in her Bozeman home, and dozens more from the New York Times she collected in the days after the attacks.

By happenstance, deGignac was an attendant on a flight from San Francisco to John F. Kennedy Airport on Sept. 14, when commercial flights resumed after the ban on flying.

The airplane they flew had room for about 160 people in the coach section, as deGignac remembers it, but there were only 37 people that day.

"It was very eerie, it was very, very quiet," deGignac said.

She said the passengers were wary, looking around at each other. With the exception of one passenger, deGignac said most didn't seem to be in the mood for conversation.

One of her coworkers bought small flags attached to toothpicks that they stuck in each one of the desserts. Another brought a large American flag, which they hung against a galley wall.

A passenger took a photo of deGignac and two of her coworkers standing in front of the flag, smiling, and emailed it to her months later with the message: "I hope you're doing okay, hope the attached pictures help you a little bit in these difficult times."

The flight took a route that flew right by Manhattan, where they could see a thick column of smoke rising from the World Trade Center site.

As a flight attendant, deGignac felt the loss acutely, particularly for the airline workers who died on the four hijacked planes.

She felt the need to also save copies of the New York Times from after the attacks. She still has several full-page ads that ran in the paper, from companies and cities like Berlin, Los Angeles and Hamburg, Germany.

"For some reason, I had an intuition that we needed to hang on to something so that there was something tangible that we could all actually read," deGignac said.

Prints of two of those ads, one from Berlin and the other from the Museum of the City of New York, now hang in the second floor of the Bozeman Public Library as part of an exhibit about 9/11.

She gave the copies to the library as part of an attempt to keep the memory of the nearly 3,000 people who died alive — particularly to younger people who may not remember the attacks.

"I feel like, especially the younger people because they were so young, they view it as something that happened like 300 years ago that they're learning in their history book instead of something that happened in their parents', or in my case, grandparents', lifetime," said deGignac. "Things are more understandable when you can see evidence of it."

The exhibit, which also includes posters explaining the events and impact of 9/11, will be on display through September.

What was once thought to be a future commodity is now a pariah for area farmers who gave it a shot.

At least three people have died after an Amtrak train that runs between Seattle and Chicago derailed Saturday afternoon in north-central Montana.

Some of Bozeman's homeless find safe summer shelter at pond

“There’s a stigma about homeless people” — that they’re dangerous, all in active addiction or living off the government — “but not the people I know.”

Helena's inaugural Septemberfest Soap Box Derby was cut short after a spectator who was hit by one of the homemade vehicles was taken away in an ambulance.

Rob and Pam Stephens died at the scene, Sheriff Linder said in a statement released Monday afternoon. Their son Riley Stephens survived the crash and was receiving medical treatment. The three were the only people onboard.

Mandy deGignac, a flight attendant on the first flight into New York City on Sept. 14, 2001, after the attacks on 9/11, holds an original copy of the San Francisco Chronicle from the attack, on Sept. 2 in Bozeman. On the front page is a photograph of the towers falling.

Mandy deGignac, a flight attendant on the first flight into New York City on Sept. 14, 2001, after the attacks on 9/11, stands for a portrait in Bozeman. She said that the pilots were allowed to circle the wreckage from the attack and saw the still-smoldering building.