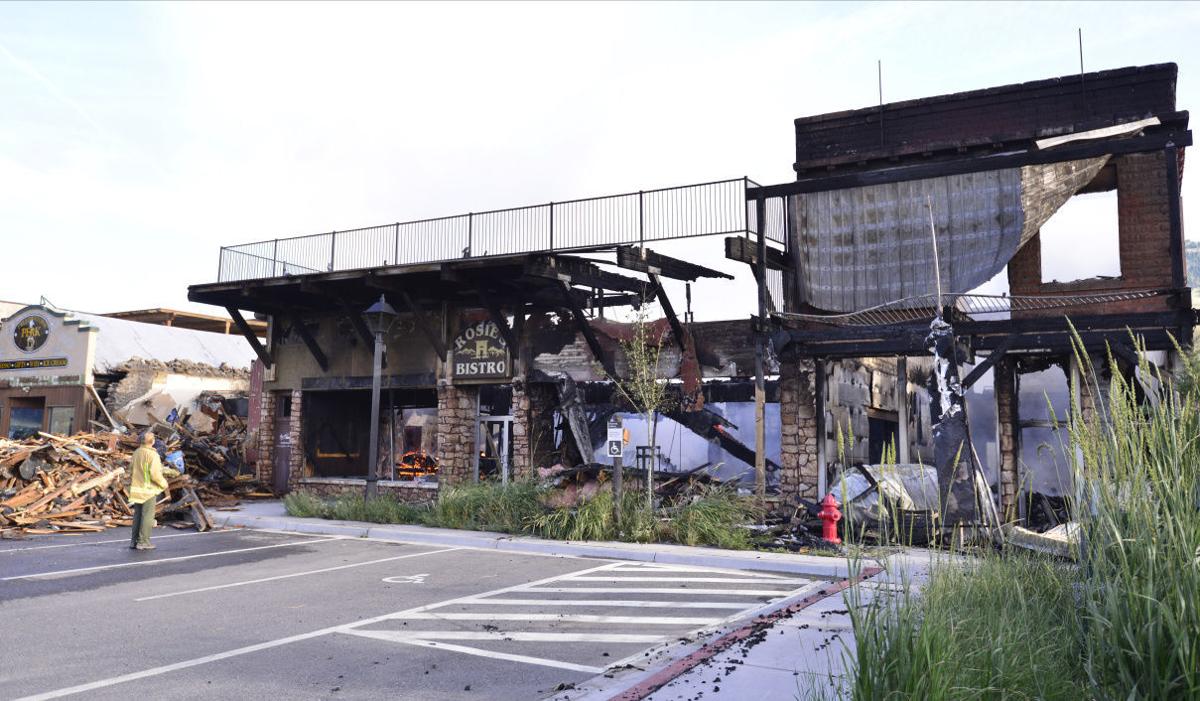 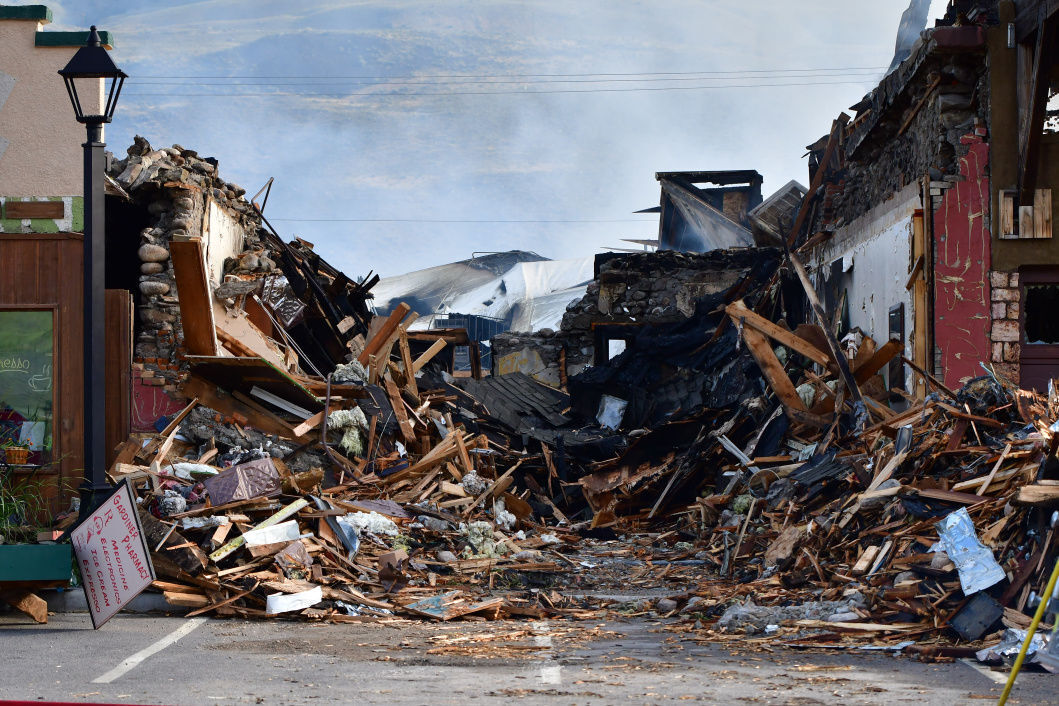 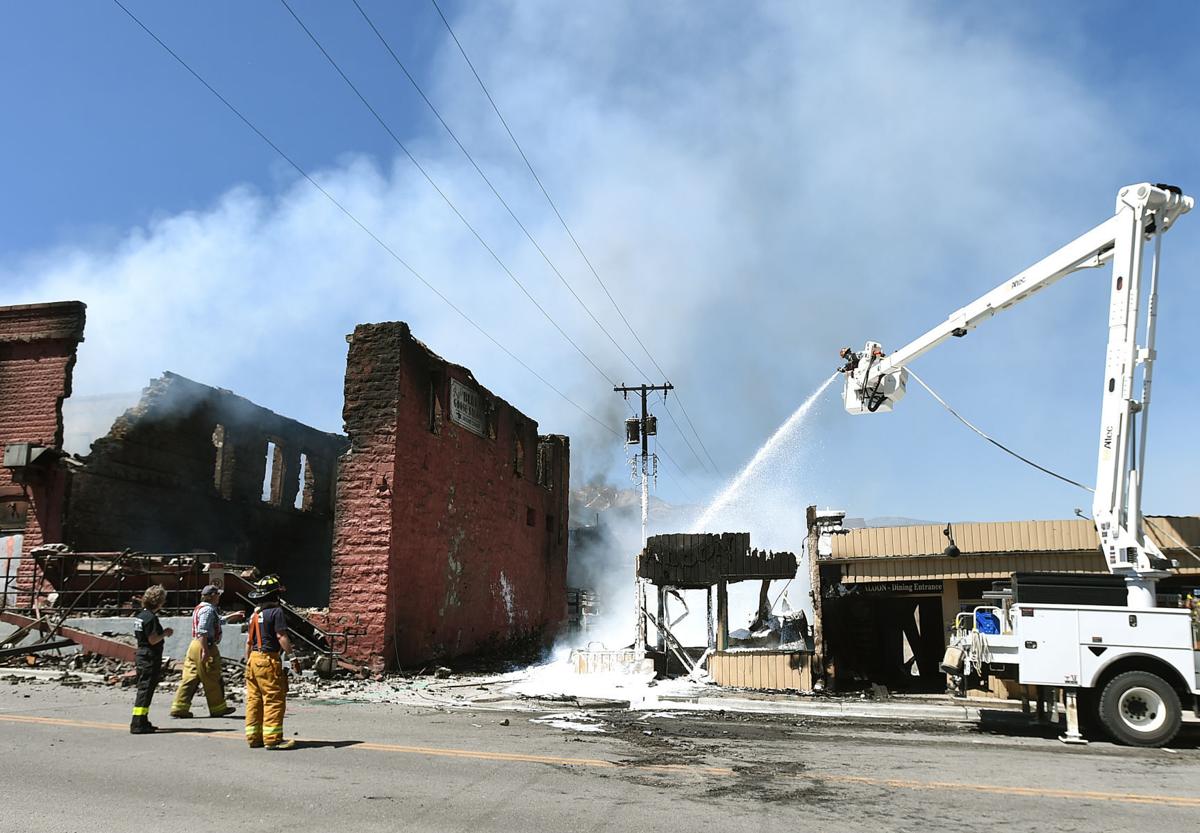 Firefighters shoot foam onto flames on Wednesday after a fire destroyed historic buildings in downtown Gardiner. The building to the right is the Two Bit Saloon, to the left is Rosie's Bistro.

GARDINER — After working for weeks to ensure his staff and customers were safe from COVID-19, Chuck Tanner now faces a more daunting challenge — rebuilding a business destroyed by a Tuesday fire just outside the North Entrance to Yellowstone National Park.

"We'd been fighting so hard with sanitizing to keep the doors open, it was painstaking," he said Wednesday as he stood in front of the smoldering remains of his Two Bit Saloon, a stone structure dating back to 1904.

The fire also leveled three businesses next door: Rosie's Bistro, the Yellowstone Raft Co. and Red's Blue Goose Saloon, which was knocked down by an excavator to keep the fire from spreading farther down the block.

"It's a devastating thing but it could have been so much worse," said Cam Sholly, superintendent of Yellowstone National Park. "That fire was moving."

"It was the epitome of a team effort," Sholly said.

Tanner said as many as 16 employees living in apartments in the buildings lost everything, from a $4,000 guitar to tools, guns and one pet cat. The loss of apartments is a setback since employee housing is scarce in the small community. He estimated about 30 employees were affected by the fire taking out four businesses.

Luckily, no one was injured, according to Park County Sheriff Brad Bichler.

"One deputy took in a good bit of smoke and one other person, but we're fortunate with the amount of damage that occurred and the number of people that it wasn't worse," he added.

"As long as we get the employees taken care of, the rest is just stuff," Tanner said.

His wife, Annie, said a GoFundMe page would be set up to help displaced employees. The Gardiner Community Church was offering bedding, toiletries and supplies as well as handing out bottled water, donuts and coffee to firefighters, law enforcement and the public.

Other residents, along with the Red Cross, were gathering food and clothing for the displaced residents. Anyone needing aid in Gardiner is invited to contact the Red Cross at 800-272-6668.

A fire investigation can't begin until the charred back wall of Rosie's Bistro, which remains standing near the alley, is taken down, said Gateway Hose Co. Chief Bob Kopland.

"We can't afford having anyone in there until there is some remediation on it," Kopland said.

The wall is also preventing NorthWestern Energy crews from returning power to the rest of the block where 13 other buildings are located, their front sidewalks in Yellowstone National Park. Buildings used by park concessionaire Xanterra Travel Collection are also reportedly without power.

Report of the fire came in at 3:55 p.m. Sheriff Bichler said one of his deputies was waved down while driving past the Two Bit Saloon at about 3:30 p.m. He rushed in with an extinguisher but it wasn't enough to stop the fire's spread.

Tanner said his employees also tried to halt the blaze with extinguishers before evacuating the building. He learned of the fire while driving toward town when his bartender phoned saying smoke was coming from a dry storage area.

"When I got there it was just smoking," he said. "Then the wind kicked up and carried it pretty bad."

When firefighters arrived they entered the building with thermal imaging equipment to find the fire's location, but it had already jumped into the roof making it out of reach, Gray said.

"Smoke was puffing out of the eaves and it was a waiting game," he said. "We were waiting for the fire to show itself."

Adopting a defensive posture, the firefighters tried to pull down walls and siding to expose the fire but that quickly became too dangerous, Gray said. When the fire broke through the roof, fire engines pummeled the blaze with 5,000 gallons a minute but the radiant heat was so great the fire jumped the alley into Rosie's Bistro, a two-story stone structure with upstairs apartments.

"The biggest compounding factor was the power line between the buildings," Kopland said.

It was unsafe to put firefighters in harm's way under the lines until NorthWestern Energy crews arrived to turn off the power.

The other complicating factor was the age of the structures and the many remodeling efforts that created layered walls and roofs where the fire could burn without being soaked by firefighters.

With the town's 200,000 gallon supply of water running low, Gray made the call to use a park excavator to tear into Red's Blue Goose Saloon to create a fire break.

"The second floor of the Blue Goose was full of fire," he said.

By demolishing the Blue Goose, the rest of the block was spared, including Yellowstone Perk, a pharmacy, coffee and ice cream shop next door to the saloon.

"All of the firefighters were nothing short of amazing," said Bethany Potts, manager of Yellowstone Perk.

She and two employees stood in front of the damaged buildings on Wednesday giving away buckets of ice cream that would otherwise melt with the power out.

Although her boss's store suffered water and smoke damage, she remained optimistic that the business would reopen soon. Still, it was hard for her not to be disappointed since visits were picking up after a tough spring due to the novel coronavirus.

"We were just starting to get to the top of the hill," she said. "Business was awesome. We were starting to feel like we were back at the top."

COVID-19 concerns were the last thing on the mind of firefighters, said Kopland, the fire chief.

"We didn't even give it a thought," he said. "Covid doesn't mean sh-- when you have a building going down. The possibility of combustion is more dangerous. And there's asbestos in those old buildings."

All told, Gray said firefighters blasted 700,000 gallons of water onto the blaze, and yet it continued to smolder on Wednesday.

Gardiner's last big fire occurred in 1985 when the junior and senior high school burned. Kopland had been named chief the year before. Prior to that, the same block that fronts Yellowstone National Park lost the Wylie Hotel and Mountain States Telephone Co. to a January fire in 1935. Potts said timbers in Yellowstone Perk still bear scars from that blaze.

Despite the loss of his business, Tanner remained optimistic amid the charred and smoking remains of his enterprise.

"We're hoping to keep everyone on the payroll and start with rebuilding before winter, because not much gets done once its winter," he said.

The state reported adding 82 new laboratory-confirmed cases of the novel coronavirus on Tuesday, with 1,484 active.

Officials in Madison County have released the name of a Helena man who died in a plane crash in southwestern Montana last week. 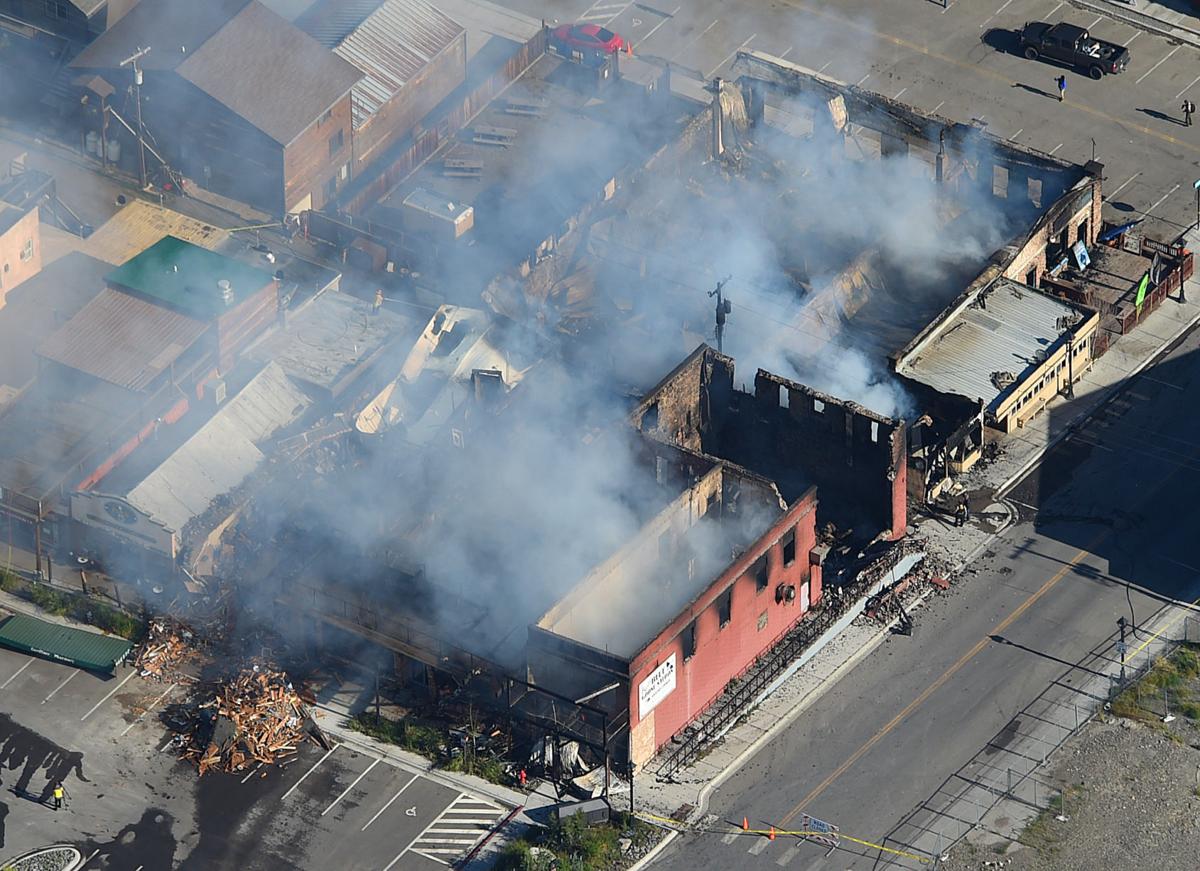 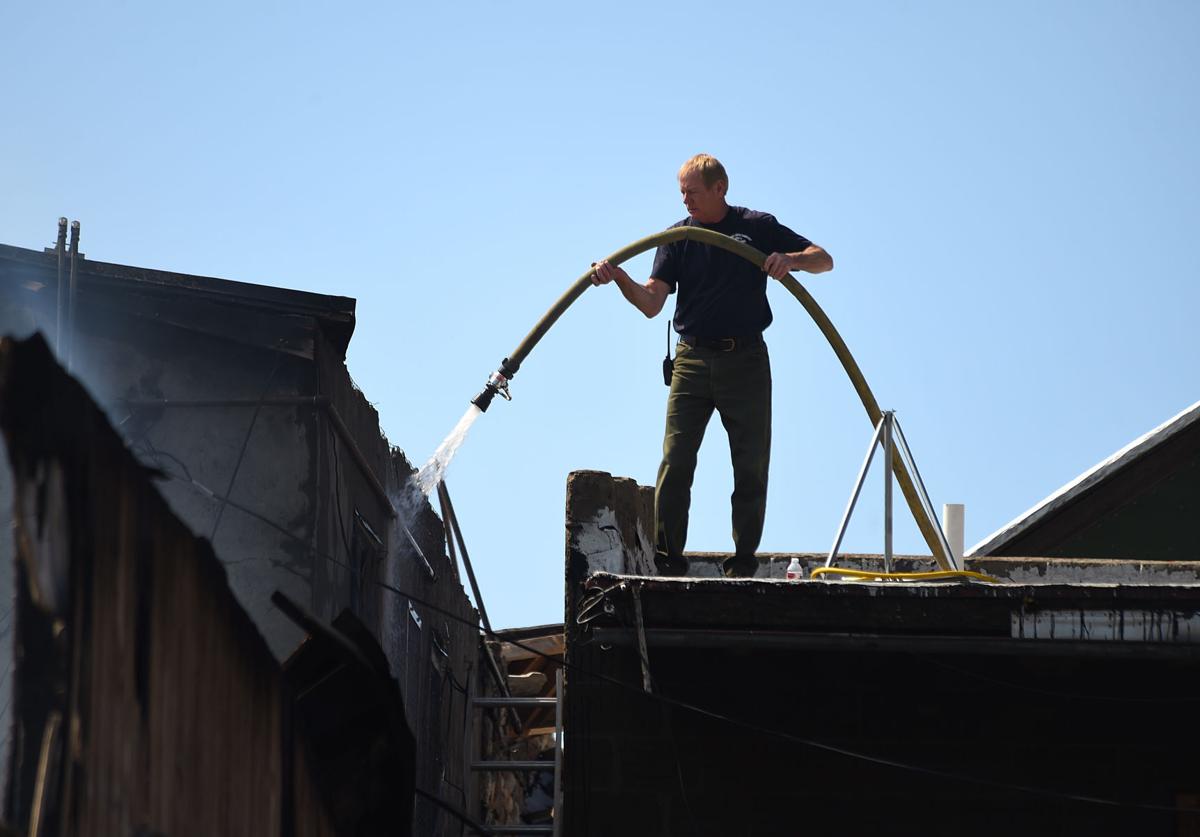 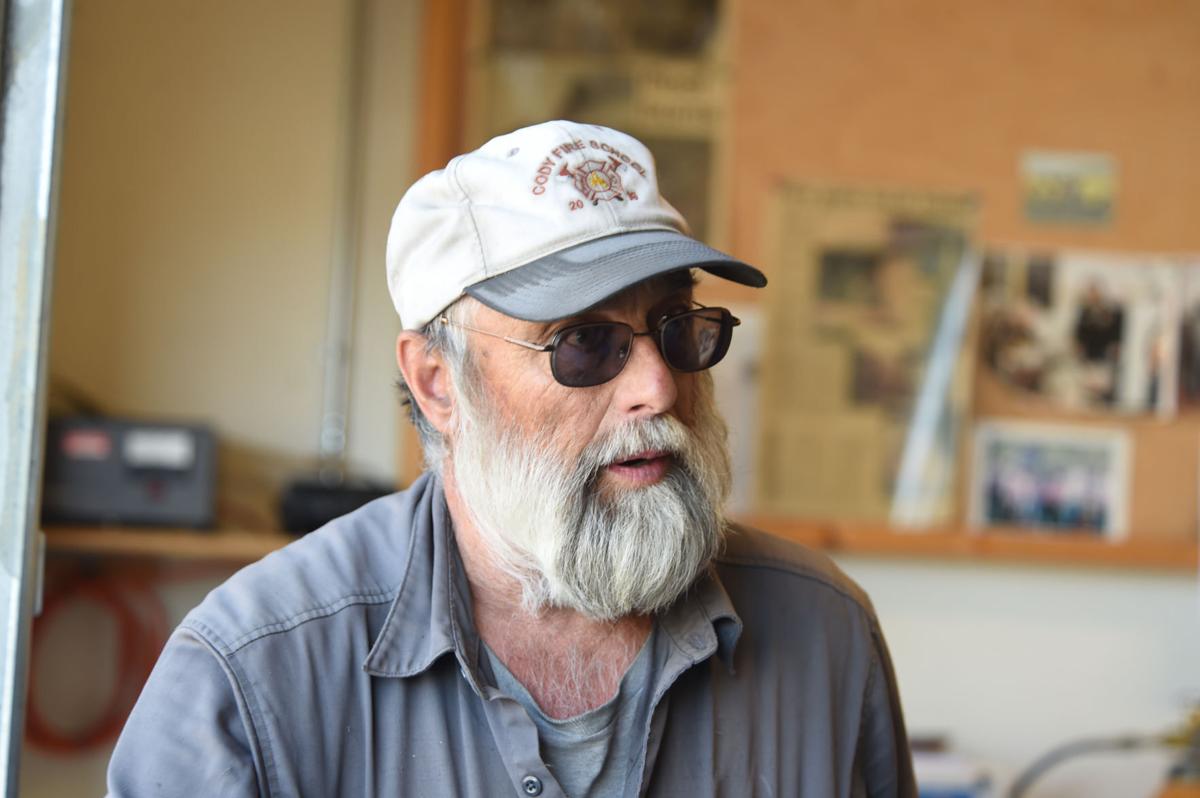 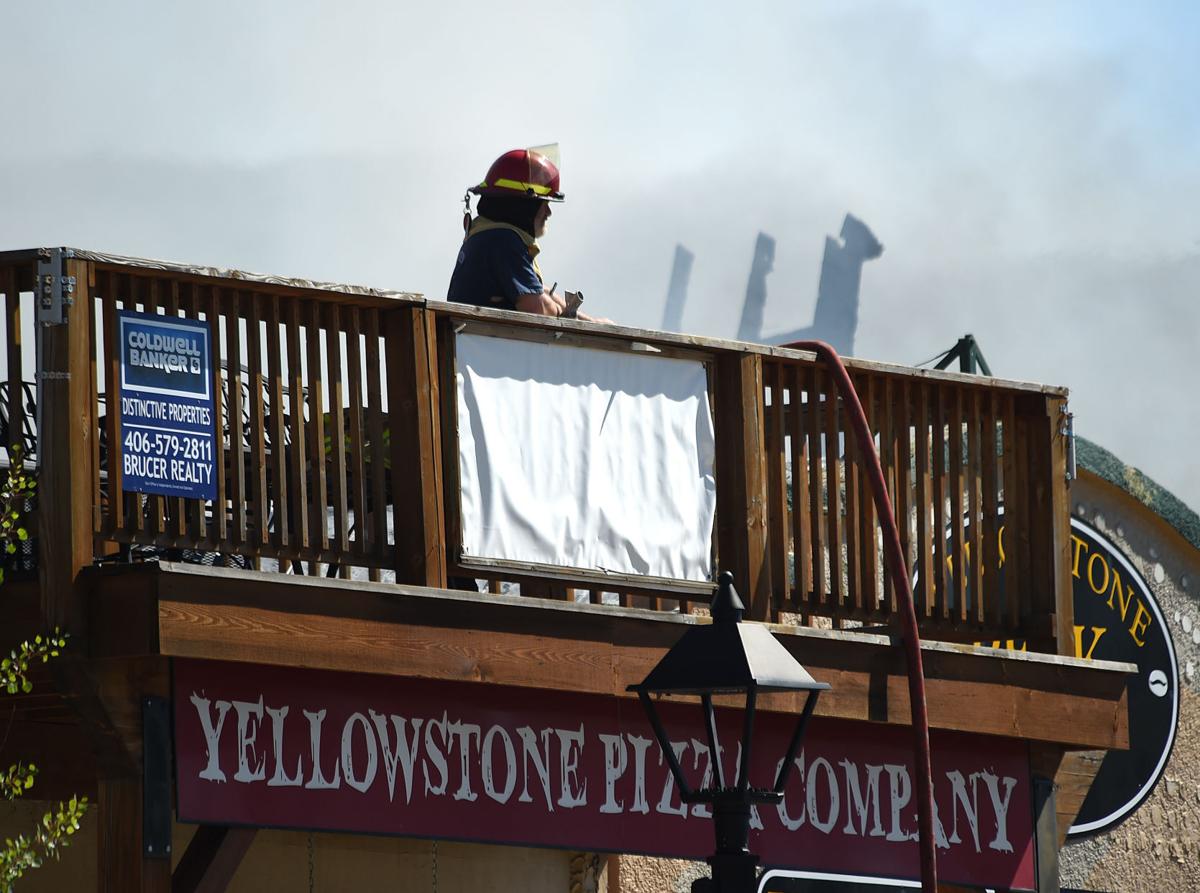 A firefighter watches from the Yellowstone Pizza Company on Wednesday after a fire destroyed historic buildings in downtown Gardiner. 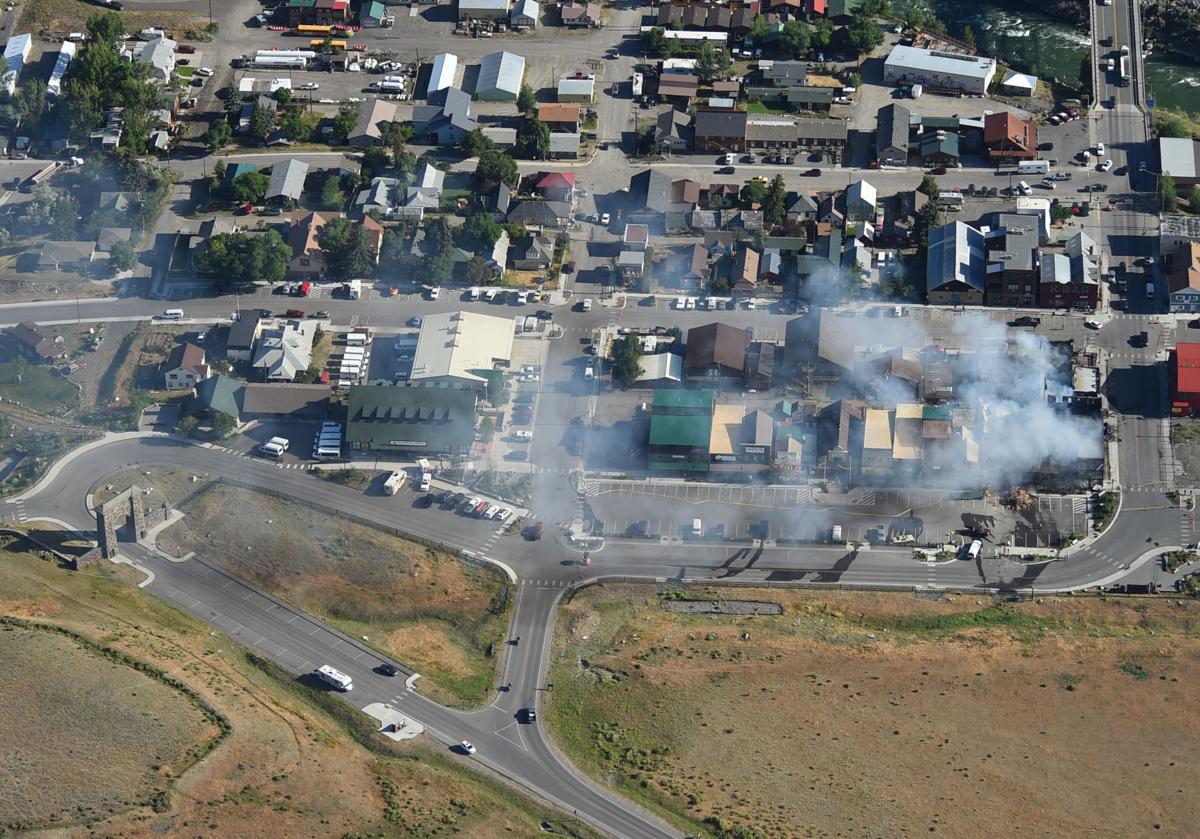 An aerial view shows the Roosevelt Arch and fire-destroyed historic buildings in downtown Gardiner. The town sits on the northern border of Yellowstone National Park. 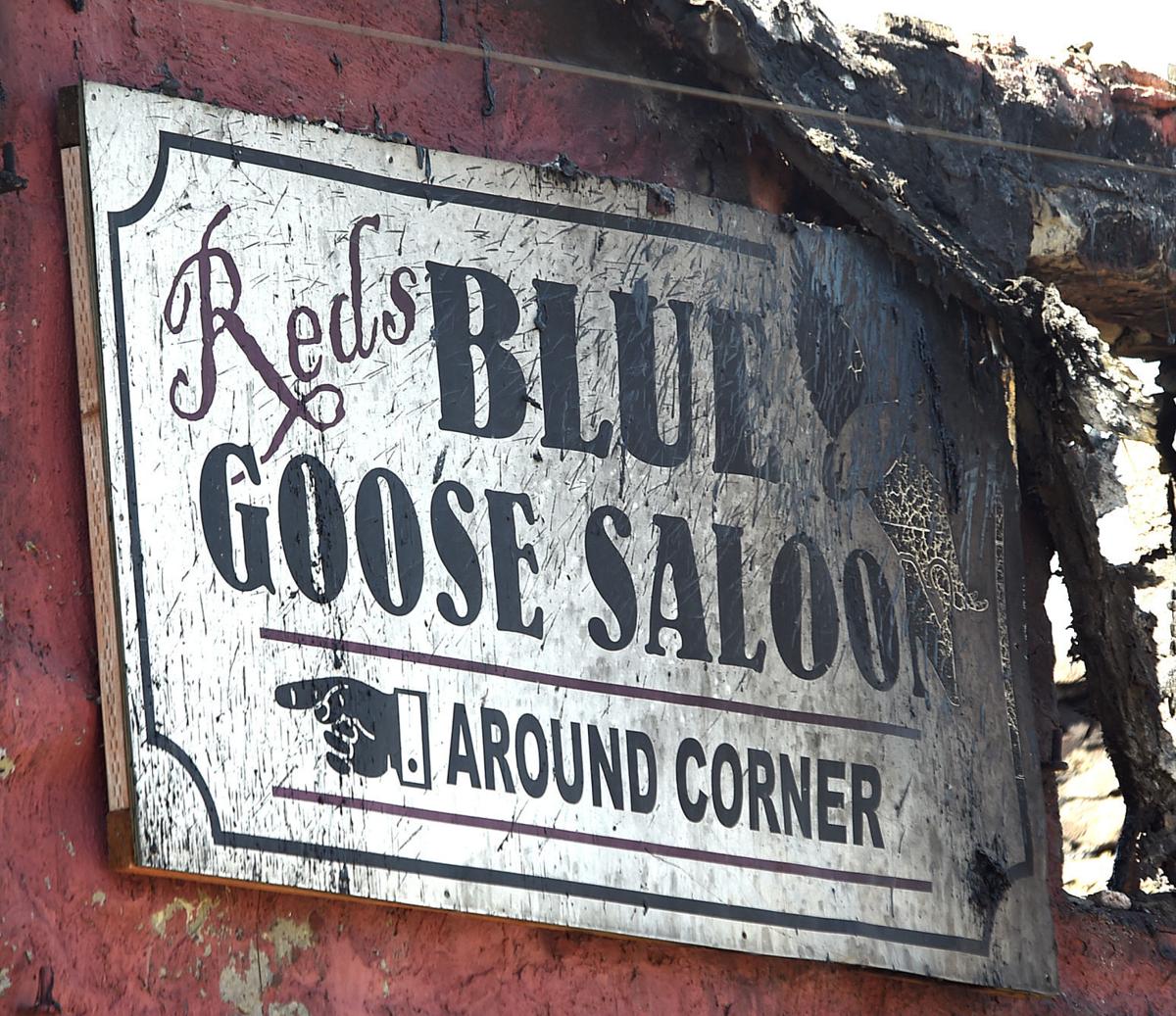 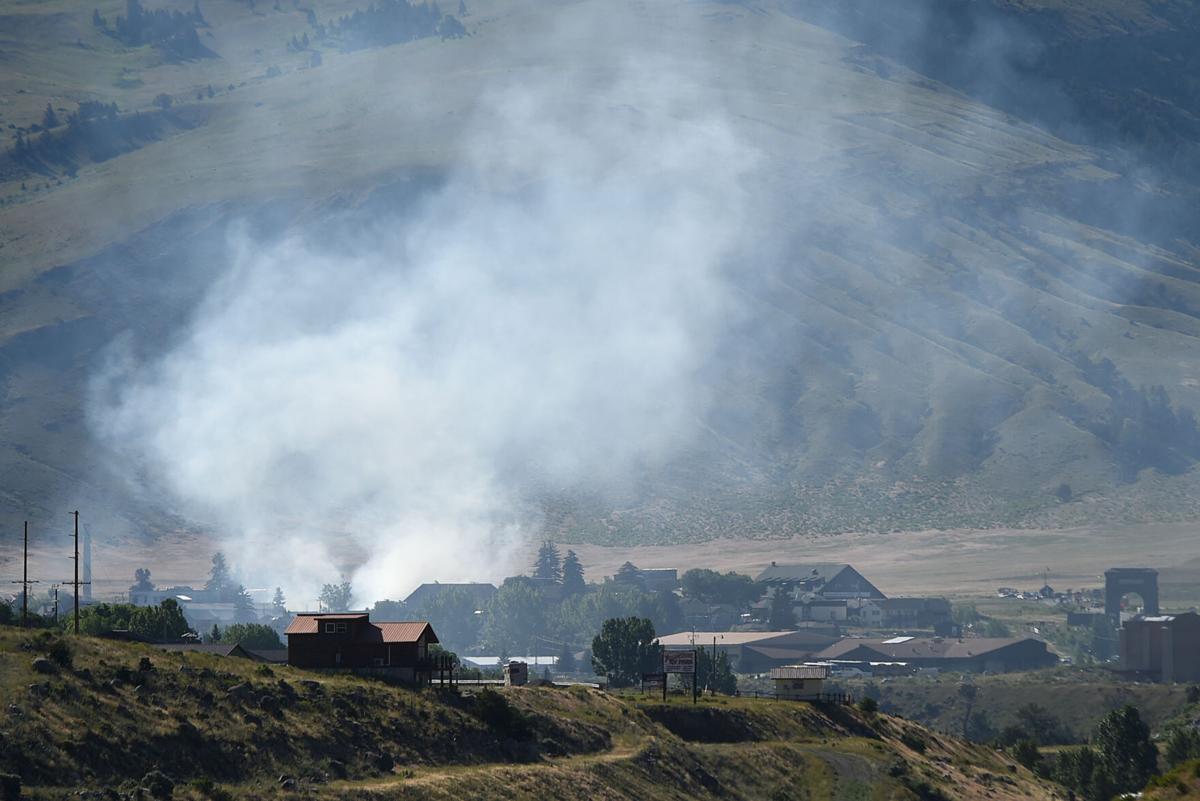 Smoke rises from the town after fire destroyed historic buildings in downtown Gardiner. 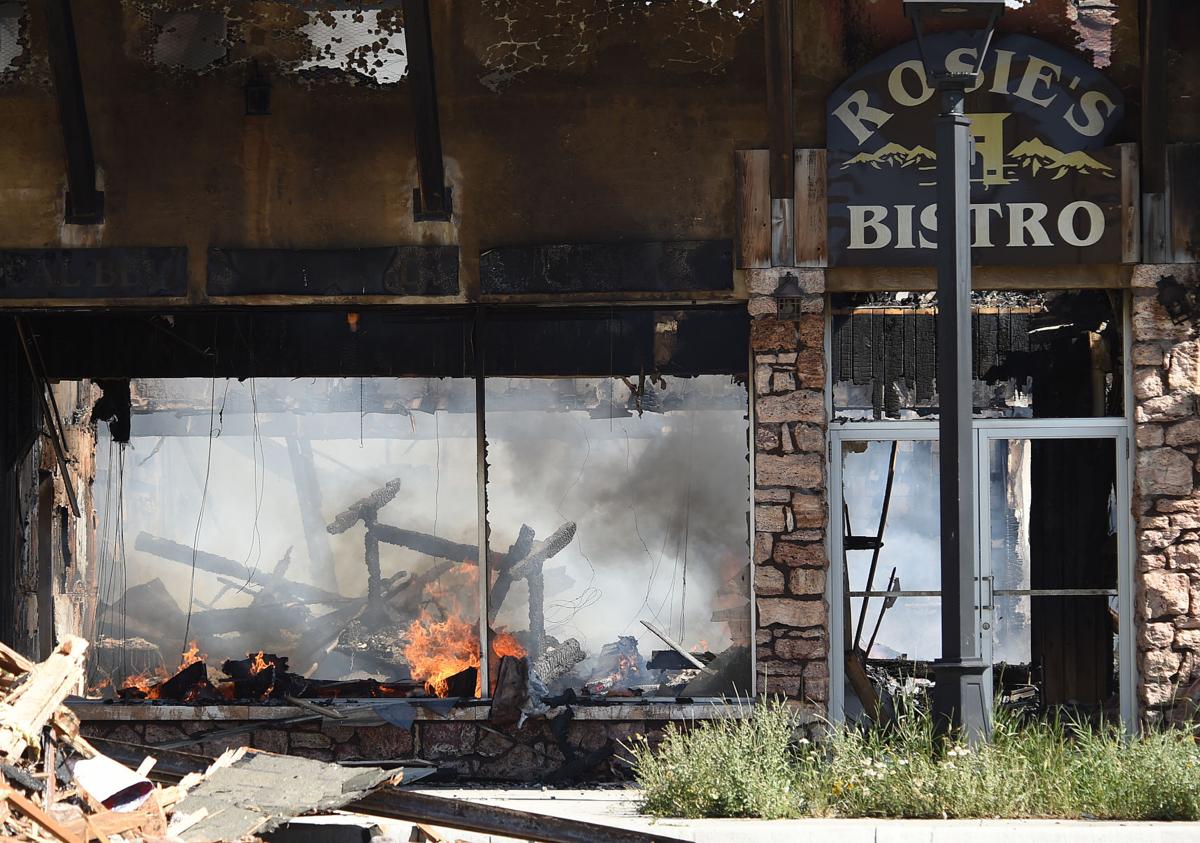 Rosie's Bistro was still burning on Wednesday after a fire destroyed historic buildings in downtown Gardiner. 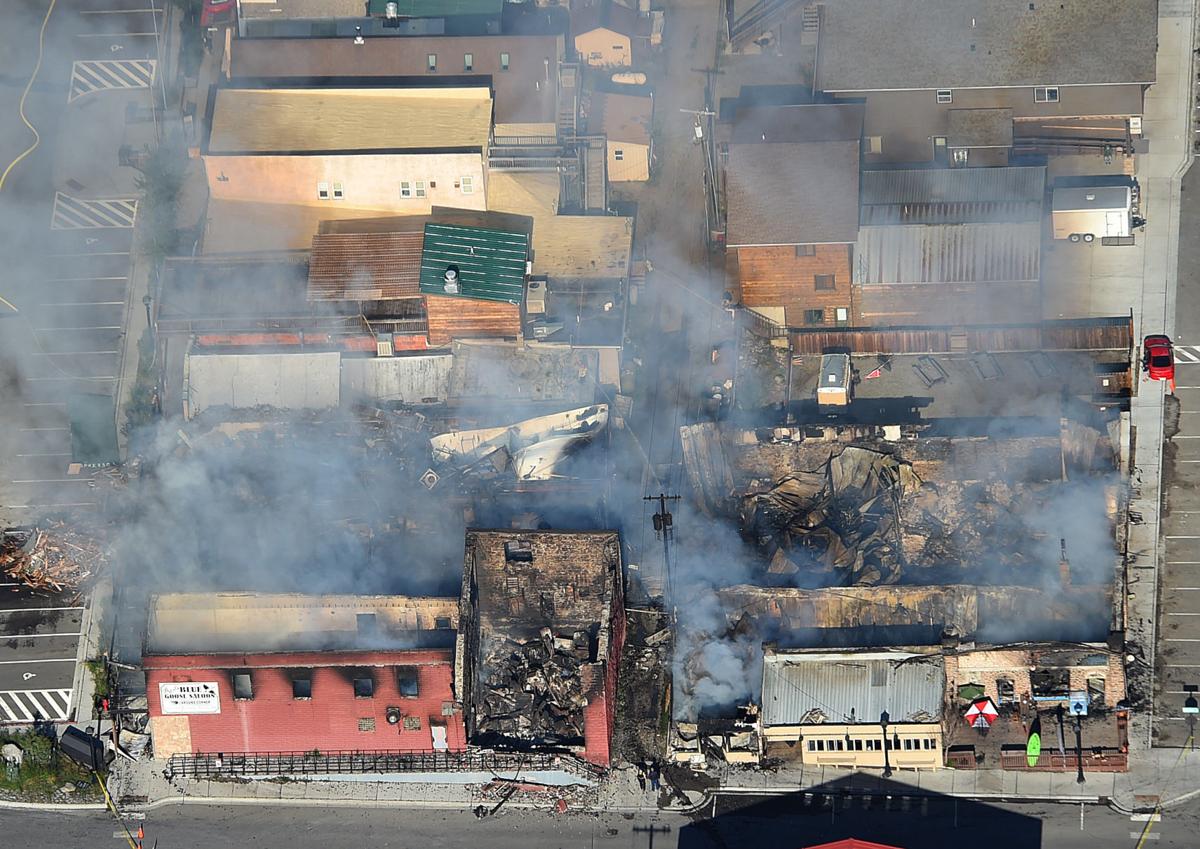 Firefighters shoot foam onto flames on Wednesday after a fire destroyed historic buildings in downtown Gardiner. The building to the right is the Two Bit Saloon, to the left is Rosie's Bistro. 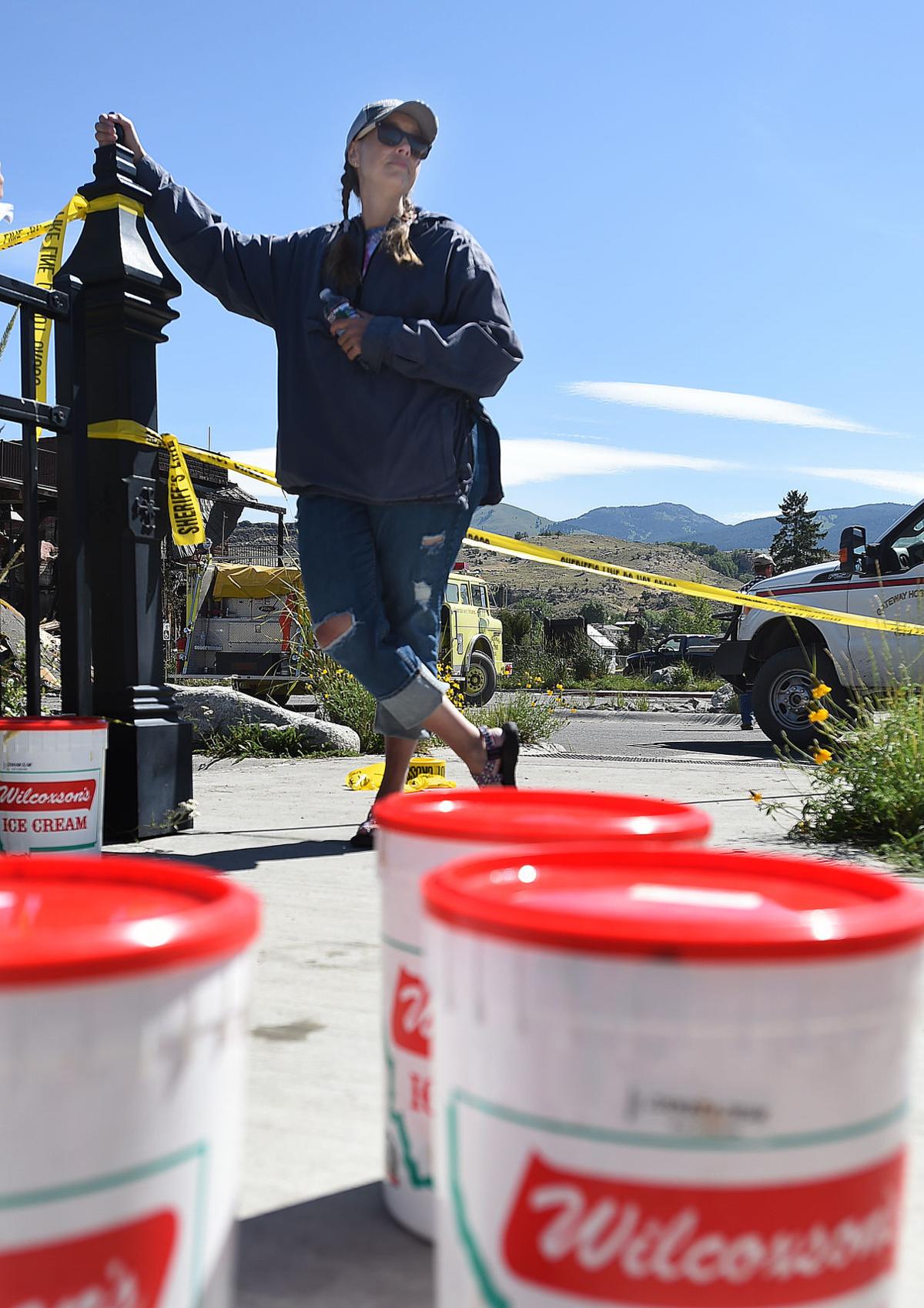 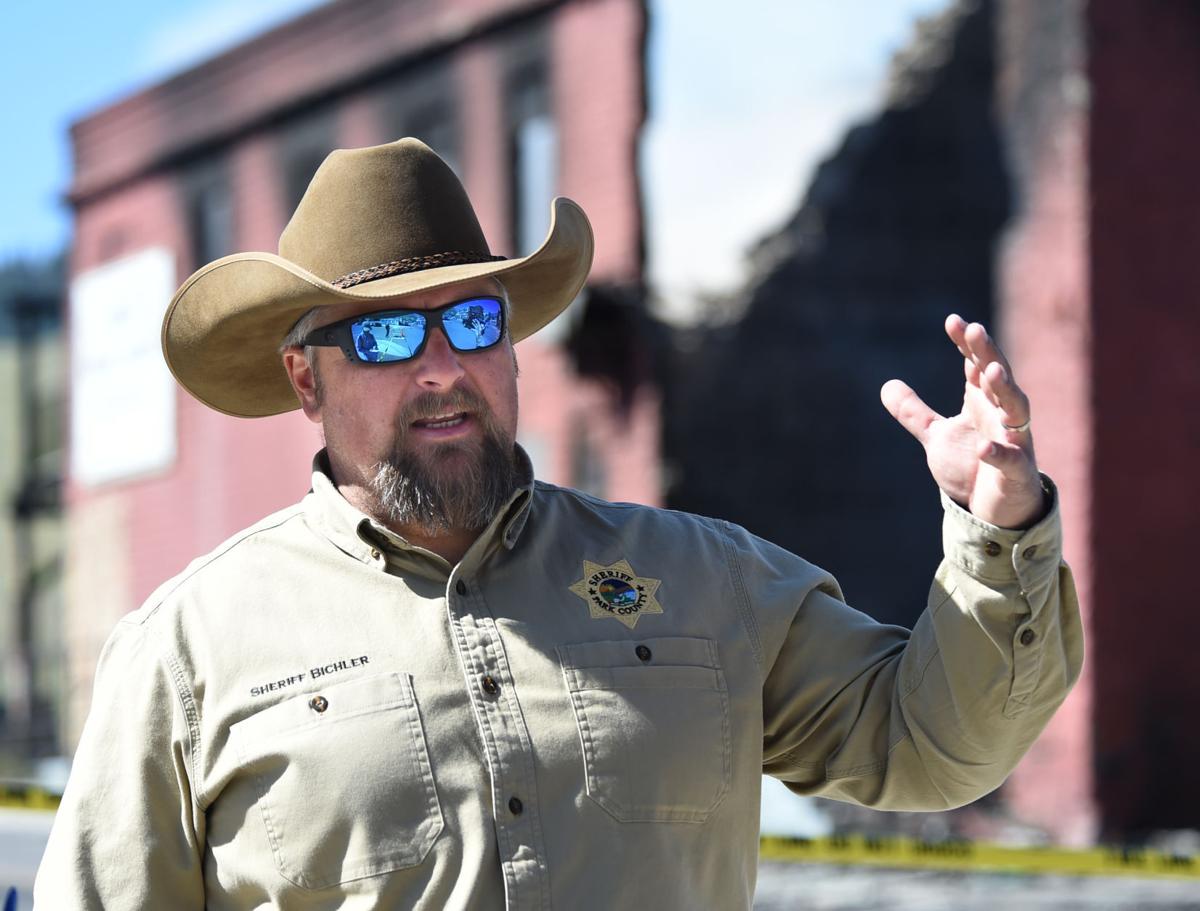