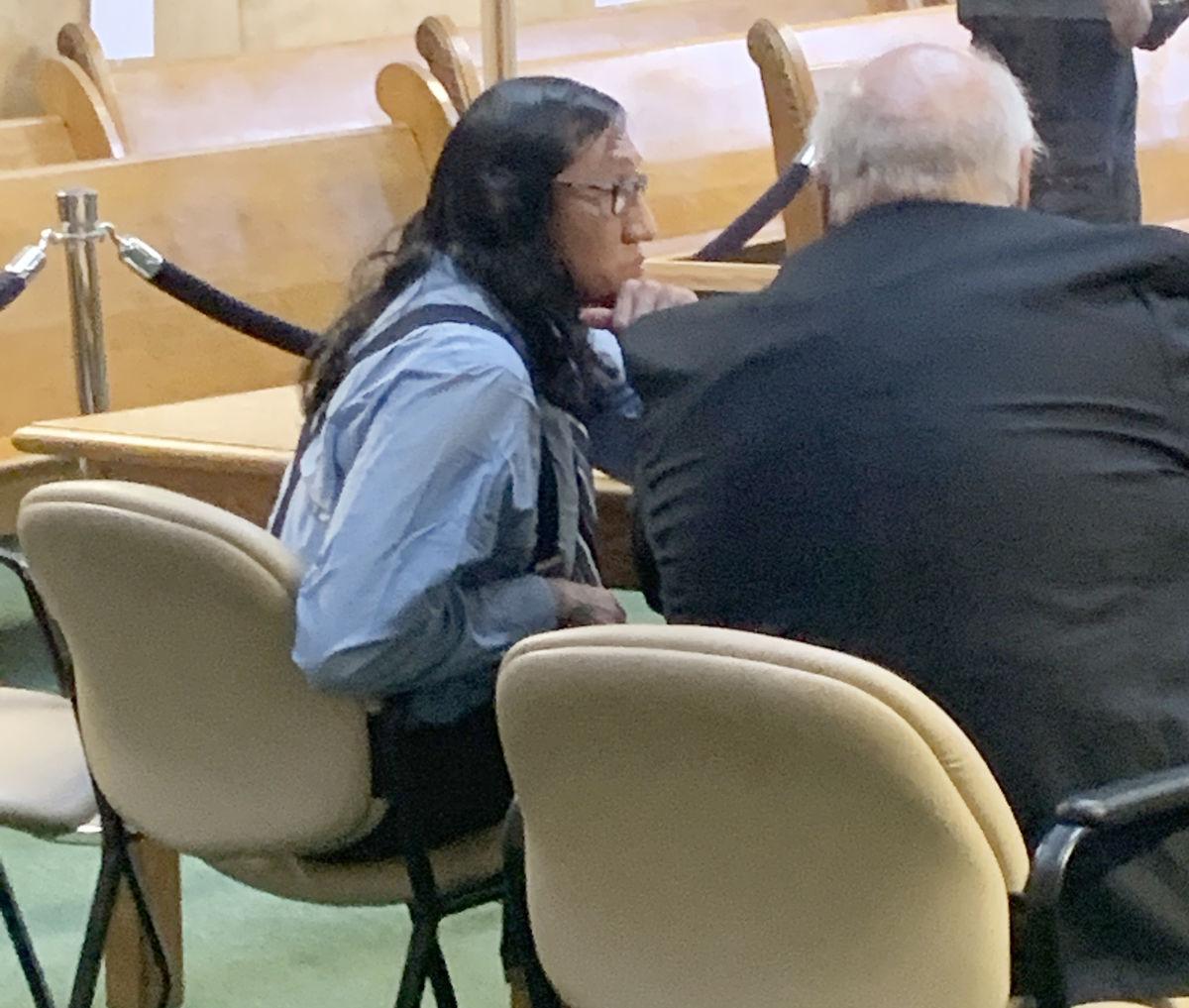 Seidel Pine talks with his defense attorney, Victor Bunitsky, during opening day of his trial on kidnapping and rape charges Monday. 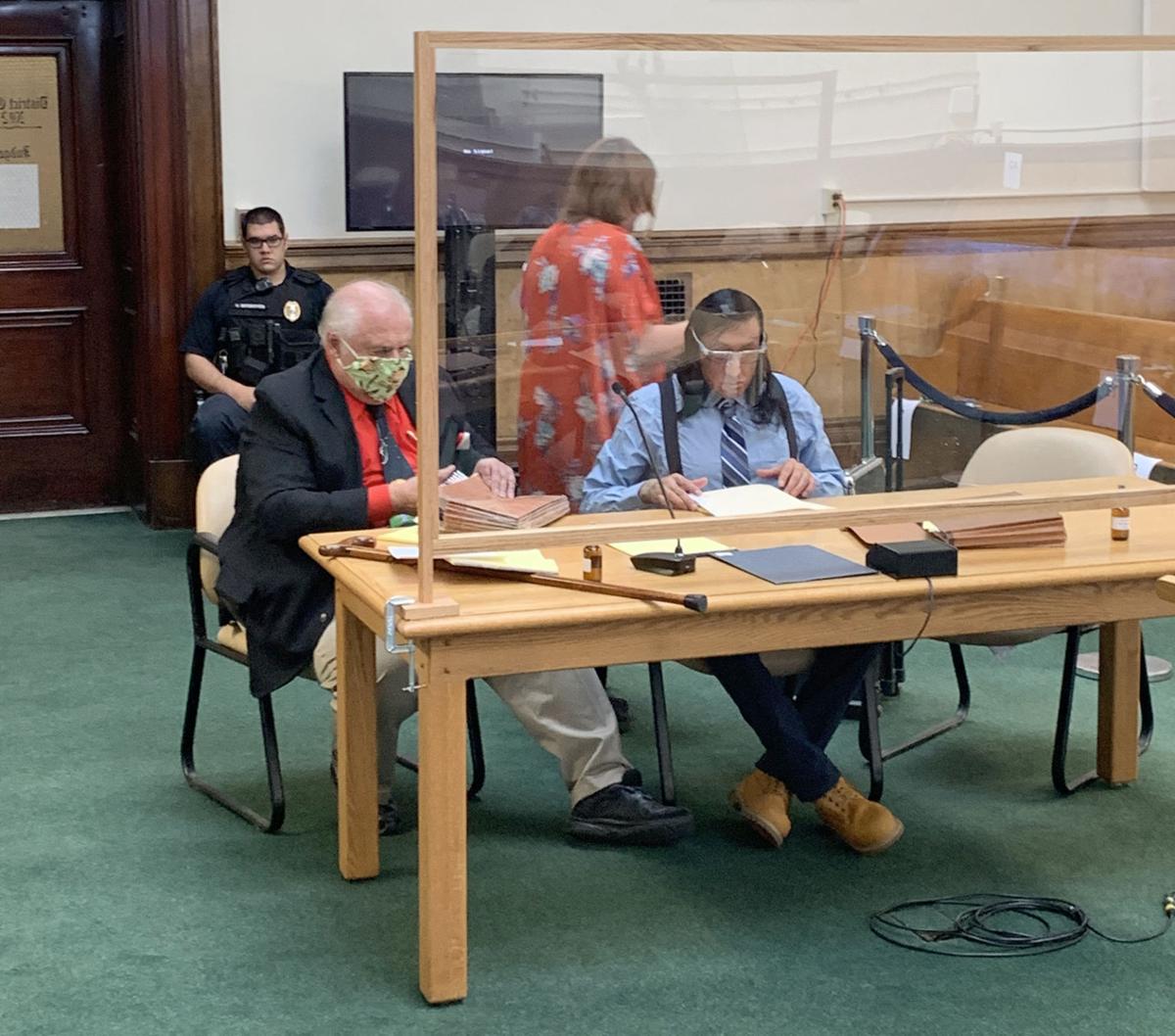 Seidel Pine, in blue shirt to right, sits with defense attorney Victor Bunitsky on the opening day of Pine's trial on kidnapping and rape charges. They are sitting behind a clear partition, one of several precautions being taken because of COVID. 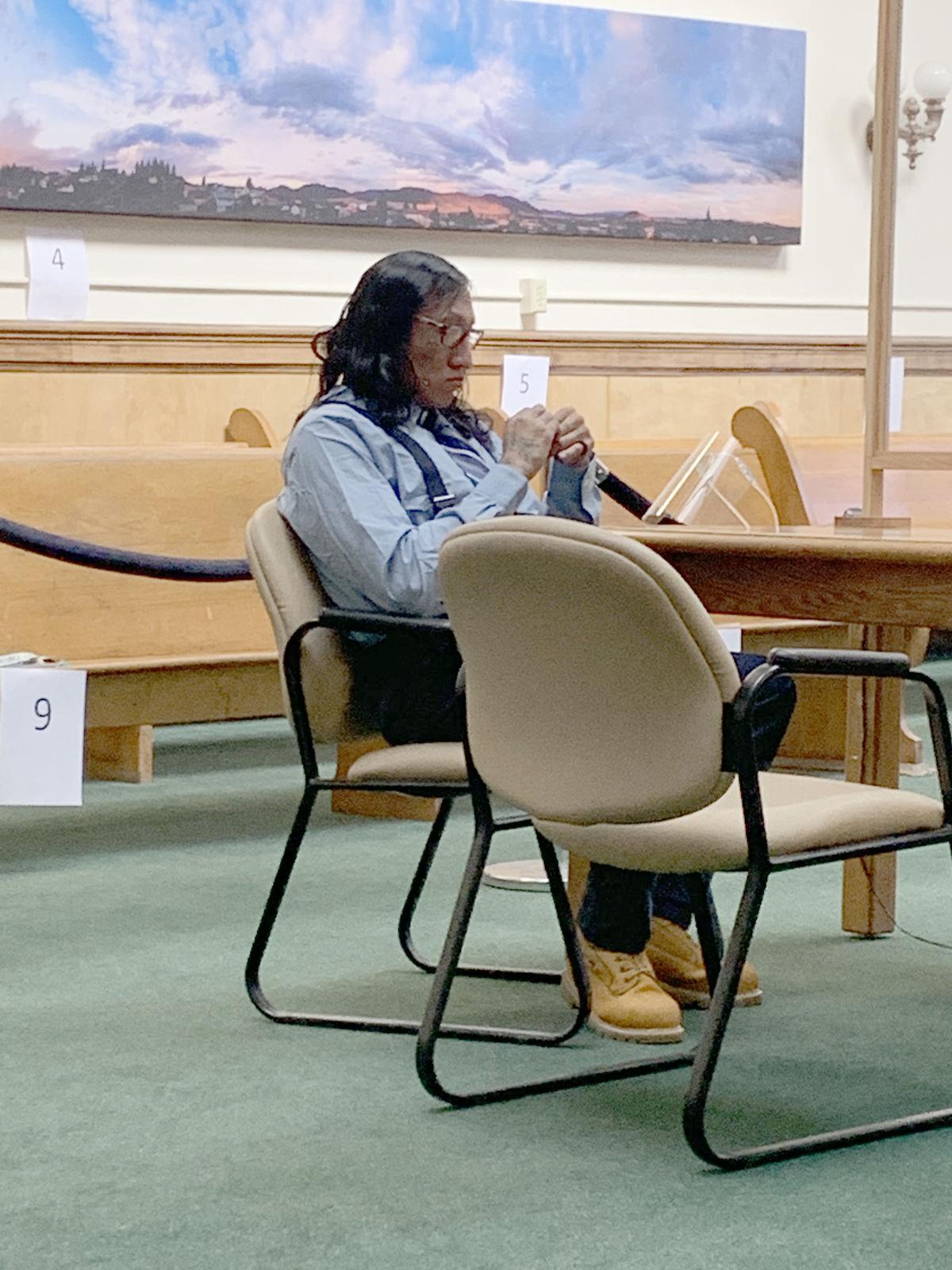 Seidel Pine waits for his trail to begin Monday.

The longest-serving inmate in Butte’s jail went on trial Monday for allegedly using a Taser device to confine and control his ex-wife over several days before driving her to a wooded area near Rocker, forcing her to strip naked in the snow and cold and later raping her.

Before the victim testified against 33-year-old Seidel Lee Pine, prosecutor Mike Clague told a jury of six men and six women that they would learn about “a story you only hear about in horror movies.”

In his opening statement, defense attorney Victor Bunitsky said there were “two sides to every story” and contended the victim was angry with Pine and trying to get back at him.

He also said the woman and Pine spent much of the time in late November 2018 drinking and doing drugs, something she acknowledged.

“She was not held against her will, she was not raped,” he told jurors as the trial before District Judge Robert Whelan got underway.

Aggravated kidnapping is punishable by death, life in prison or up to 100 years, and the rape charge has a maximum life term or up to 20 years. The first charge carries a minimum two-year term, but Kelli Fivey, chief prosecutor in the case, is not seeking the death penalty.

Pine is being held at the Butte jail with bond set at $200,000 and his 668 days in custody make him the longest-serving inmate currently there. But he is allowed to wear street clothes during the trial.

The victim testified Monday that she and Pine had children together and were married for a year before divorcing in 2015. Pine had done prison time earlier on a drug conviction and contacted the victim in November 2018. She was living in Missoula at the time.

They met at a house in Butte that Pine was staying at with friends, and the victim admitted they spent time drinking and doing meth for more than a week before events turned bad.

She said she broke his cell phone on Nov. 17, 2018 and during an ensuing argument in a street outside the house, she asked a neighbor to call police. They showed up but were told that everything was fine.

For the next several days and nights, the victim said, Pine confined her to a bedroom they shared in the house and wouldn’t let her leave for any reason without him or his permission.

He had taken her cell phone and forced her to stay naked much of the time, she said.

He drove her to Bozeman on Nov. 23 and stopped at a store in Belgrade, and when he went in for some beer, she drove off. But she was quickly pulled over by an officer for having a busted tail light.

She said she was afraid of what Pine would do if she told police what was going on, but drove to a hotel in Bozeman and was allowed to use a computer to send a Facebook message to her sister asking for money.

Pine had messaged her by that time, she said, and because she had no money for gas and didn’t know anyone in the area, agreed to pick him up.

They drove back to Butte and he started using an electronic Taser device, zapping her more than 20 times over the next several days and using it other times to threaten and control her, she said.

She said on Nov. 26, he was angry and drove her to Rocker, and after sideswiping a car on the interstate, took her to a wooded area off a dirt road and forced her to strip naked and walk outside in the cold and snow.

She said he followed her outside, punched her in the head, kicked her on the ground twice, and then drove her to another area and forced her to have sex against her will.

“He said, ‘You know I’m going to take it anyway,’” the victim said, adding that “I felt he was possibly ready to kill me.”

He drove them back to Butte where he continued to confine her in the house, she said. A woman at the house let her use a cell phone quickly on Nov. 28 and she sent a Facebook message to her sister saying she needed help. She also sent a photo of her with black eyes.

She said she heard police outside later that night, but Pine told her to go upstairs and officers left when nobody answered the door.

The victim was composed and soft-spoken during most of her testimony, but started crying when recalling a dream she had that night of getting to see her children.

Later that day, she said, she managed to walk out and flag a woman getting into her car. The woman agreed to drive her to the store, but just before they took off, Pine got in the car, too.

They were let out in the parking lot of Stokes grocery store, which has since closed, and she decided to “make a scene” by crying. The victim said Pine walked away and she got a store clerk to call police.

They took her to the hospital, where photos were taken of her injuries, and officers went to the house and found Pine hiding in a closet. One of them testified to that Monday.

“When he lost his power and control over her, he hid in a closet,” Clague told jurors.

Pine told police the two were trying to work things out, and although he backhanded her when she once attempted to grab the steering wheel, he denied making her get undressed and go out in the cold and said the sex they had that day was consensual.

During cross-examination, Bunitsky said the victim had previous contact with the police during the ordeal but didn’t say anything.

“You could have created a scene anytime you wanted, couldn’t you have?” he asked.

“I guess I could have,” she said, later reiterating that she was afraid to do so.

She admitted she spent “a whole lot of the time” drinking and using meth, but denied Bunitsky’s suggestions that she wanted to work things out with Pine. She said he wanted that but she was not interested in resuming a relationship.

Still, Bunitsky said, “You are hanging out together drinking and doing drugs.”

The trial resumes Tuesday morning and is expected to last through at least Wednesday.

The Montana Supreme Court has ordered another resentencing hearing for a man who is serving life without the possibility of parole for a triple homicide committed when he was 17.

An Indiana woman said she climbed Mount Rushmore at night because she knows it’s not allowed, according to a report by a park ranger.

Yellowstone County saw 19 homicides in 2020, or more than one every three weeks.

Seidel Pine talks with his defense attorney, Victor Bunitsky, during opening day of his trial on kidnapping and rape charges Monday.

Seidel Pine, in blue shirt to right, sits with defense attorney Victor Bunitsky on the opening day of Pine's trial on kidnapping and rape charges. They are sitting behind a clear partition, one of several precautions being taken because of COVID.

Seidel Pine waits for his trail to begin Monday.