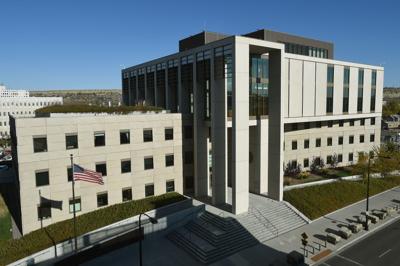 A federal court says a Montana judge and sheriff's deputy violated a Mexican-born man's rights when they detained and arrested him based solely on suspicions he was in the country illegally.

Construction worker Miguel Angel Reynaga Hernandez was at a Billings courthouse in October 2017 with his wife, who was seeking a civil protection order against another person.

When that person said Reynaga was not a legal citizen, former Yellowstone County Justice of the Peace Pedro Hernandez called for a county sheriff's deputy, Derrek Skinner, who detained Reynaga and brought him to the county jail. Reynaga was later turned over to federal custody.

"Although unlawful presence may indicate an immigration crime was committed, such as illegal entry, unlawful presence can also result from noncriminal conduct such as overstaying a visa," U.S. District Judge Susan Watters wrote in her Wednesday order in a lawsuit against the judge and deputy. "Suspicion of unlawful presence does not, without more, provide a basis to detain or arrest someone because it is not a crime for a removable alien to remain present in the United States."

Reynaga was eventually released and deportation proceedings against him dismissed under orders from an immigration judge in Tacoma, Washington. He remains in Billings, said attorney Matt Adams with the Northwest Immigrant Rights Project. The Seattle-based group sued on behalf of Reynaga last year seeking monetary damages.

The Yellowstone County Attorney's Office, which defended Hernandez and Skinner, had said in court filings that Reynaga committed a crime by illegally entering the U.S.

Reynaga came to the U.S. seeking work and has a visa application pending, Adams said. He wouldn't directly answer a question on his client's current legal status, saying it was irrelevant.

"They never had any basis on which to make an arrest because they didn't know, didn't have probable cause," Adams said. "State and local police don't have authority to engage in immigrations investigation and enforcement. It's a federal, civil matter."

Hernandez declined immediate comment on Watters' ruling because he had not read through it nor consulted with the county attorney's office. Hernandez retired in 2017 and has said previously that it was his "obligation" as a judge to report Reynaga.

Yellowstone County Deputy County Attorney Melissa Williams said her office was not commenting because the lawsuit is ongoing.

Skinner, who has left the sheriff's office and is now a probation and parole officer, did not immediately respond to requests for comment.

Some places in the U.S. have "sanctuary" policies that prevent cooperation with detention requests from federal immigration authorities, but none are in Montana. Democratic Gov. Steve Bullock, who is now running for president, this month vetoed legislation that would have effectively banned local governments from declaring themselves as sanctuaries.

Watters turned down a request from Reynaga for a declaration that Hernandez and Skinner acted illegally. She said that would be redundant given her decision that Reynaga's rights were violated.

The two sides will now negotiate over possible damages, Adams said. A November jury trial is scheduled if they fail to reach an agreement.

Lawsuit: Montana judge had no right to ask for arrest of immigrant who was in court to testify for his wife

An immigrant rights group alleged Monday that a Montana judge acted illegally when he asked a deputy to take away from his court a Mexican-born man who was later detained by federal immigration authorities.