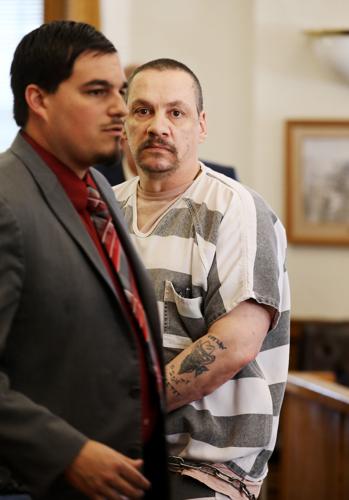 Troy Johnson, right, pleads guilty to deliberate homicide on Wednesday for killing an Anaconda woman in 2018. Josh Demers, one of his public defenders, is to the left. 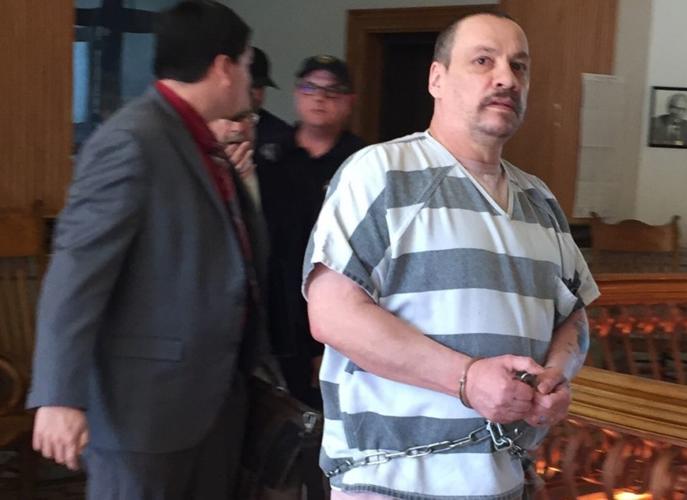 Troy Johnson heads to court in Anaconda Wednesday for a plea change in his homicide case.

Troy Douglas Johnson pleaded guilty to deliberate homicide Wednesday for killing a 64-year-old Anaconda woman who had just beaten liver cancer and let Johnson and his girlfriend stay in a room connected to her house.

As part of a plea deal, Johnson admitted killing Shelley Schafer and prosecutors dropped four additional felony charges, including theft and burglary. He could still face charges in Butte-Silver Bow tied to a high-speed chase with police after the homicide.

District Judge Ray Dayton accepted the plea and ordered a pre-sentence investigation for Johnson, 53, who has a long criminal record and had been released from prison a year before the killing on May 15, 2018.

He was on probation supervision in Billings and being sought in connection with an assault there in the days leading up Schafer’s death.

Johnson admitted that he beat Schafer to death with a bar, but also said, “I didn’t mean to kill her.” Upon further questioning from the judge, he acknowledged he knew what he was doing when he struck her.

Sentencing will be set later but deliberate homicide in this case carries a maximum penalty of life in prison. Anaconda-Deer Lodge County Attorney Ben Krakowka did not seek the death penalty but is recommending life as part of the plea agreement. He said if the recommendation is accepted, Johnson would have to serve at least 30 years before he is eligible for parole.

Josh Demers, one of Johnson’s public defenders, agreed to the plea deal but Dayton reminded Johnson that he didn’t have to go along with the recommendations.

According to prosecutors, Johnson was on probation in Billings when he started living in a room attached to Schafer’s house in Anaconda five days before the homicide. Schafer had special needs, recently overcame cancer and worked as a recess attendant at local schools.

A neighbor heard a “ruckus” coming from Schafer’s house on May 14 and her body was discovered the next day. She had lacerations and blunt-force trauma to the head, court documents say.

The day after the homicide, Johnson reportedly admitted to his ex-wife that he killed Schafer, saying he had hit her twice with a bar then took credit cards, money and jewelry from her house and stole her car.

After talking to witnesses and collecting evidence, police quickly identified Johnson as the suspect and located the stolen car at Eddy’s Motel in Butte. While waiting for backup, they saw Johnson and his girlfriend, Becky Hayden, pulling out of the motel parking lot.

At one point he stopped and got out of the car, pushed Hayden out and took off again. He ultimately crashed and fled on foot into the foothills near Little Basin Creek and Beef Trail roads. He was ultimately caught and arrested.

He was initially charged in Anaconda with numerous additional felonies tied to the pursuit in Butte, including four counts of assaulting an officer for endangering police during the chase. But the judge later said those had to be pursued in Butte-Silver Bow County.

Samm Cox, a prosecutor in Butte-Silver Bow, said Wednesday that he needs more time to review details of the case before deciding on charges in Butte.

Johnson and Hayden were described by a neighbor as a homeless man and woman hanging around Schafer’s place before the homicide.

Johnson has convictions for partner-family member assault out of Lewis and Clark County that date back to 1998 and 2006, but his record also includes numerous probation and program violations and times he went missing while on supervision.

Several incidents and probation violations had occurred since his supervision was transferred to Billings, according to a probation report filed the day he was arrested in Butte for Schafer’s death.

The trial of Troy Douglas Johnson, who stands accused of murdering a 64-year-old Anaconda woman last spring, is on hold pending a court-ordere…

Man wanted by probation officers at time of Anaconda homicide

Carbon capturing concrete could be the future of green construction

Carbon capturing concrete could be the future of green construction

Troy Johnson, right, pleads guilty to deliberate homicide on Wednesday for killing an Anaconda woman in 2018. Josh Demers, one of his public defenders, is to the left.

Troy Johnson heads to court in Anaconda Wednesday for a plea change in his homicide case.