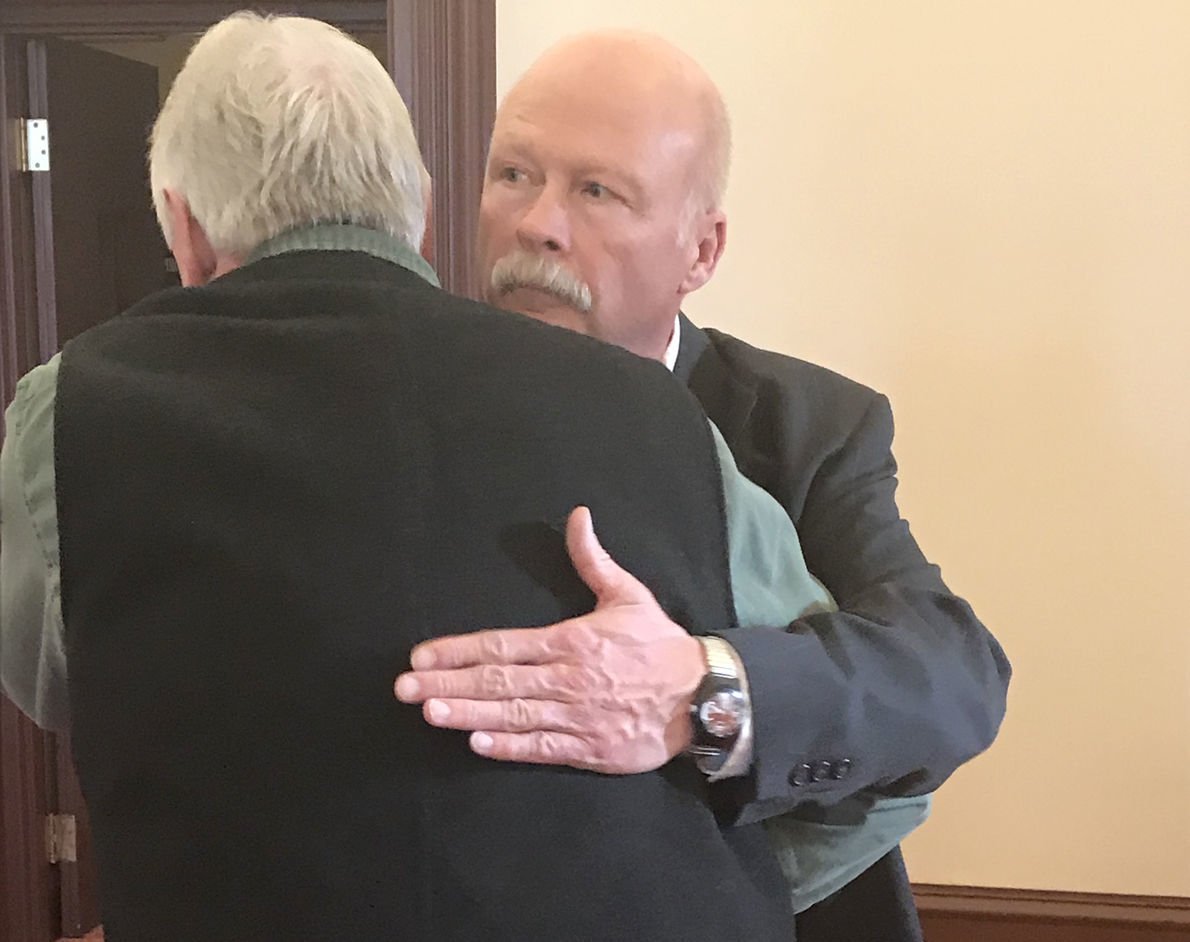 Former Madison County Sheriff Roger Thompson gets a hug from a supporter Thursday after a jury found him guilty of misdemeanor official misconduct. The jury was hung on felony charges against Thompson. 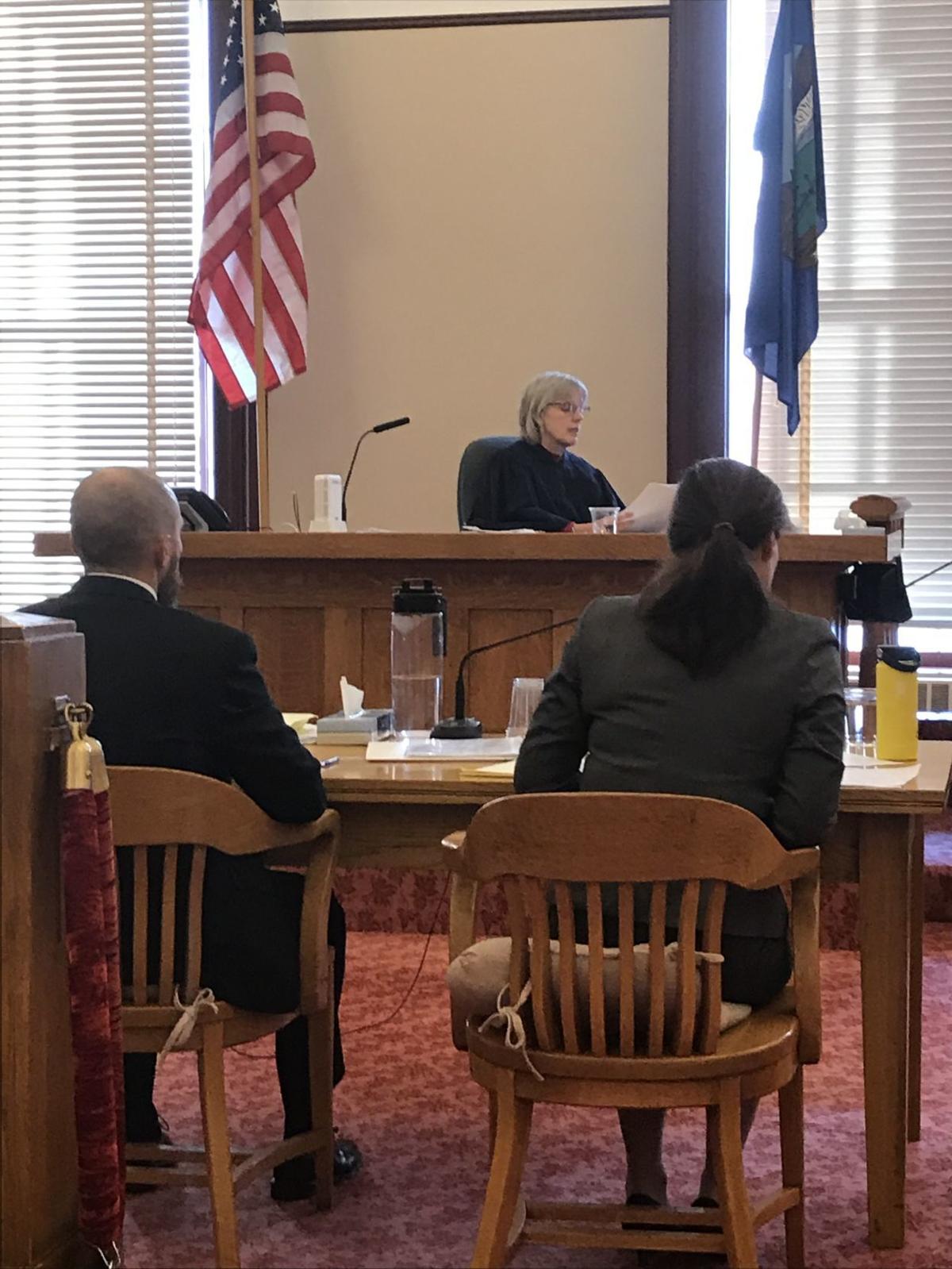 VIRGINIA CITY — A jury found Roger Thompson guilty Thursday of misdemeanor official misconduct for canceling a warrant without authority but could not decide whether he was guilty of perjury and tampering with evidence in connection with a controlled drug buy when he was Madison County sheriff in 2017.

Prosecutor Mary Cochenour told District Judge Kathy Seeley that the state wanted a new trial set on the felony charges that the jury was hung on.

Jurors heard two days of testimony in Thompson's trial in Virginia City this week and began deliberations after hearing closing arguments Thursday morning. They deliberated about four hours and the jury foreman told Seeley that they would be unable to reach verdicts on the felony counts with further deliberations.

During closing arguments Thursday, prosecutors said Thompson threw away drug evidence, lied in a search warrant application and later canceled an arrest warrant without authority in order to protect a confidential informant who was working with him. The misdemeanor charge carries a sentence of up to six months in jail or a maximum $500 fine.

“He had his own deal going,” Cochenour told the 12-member jury Thursday morning. “He did it how he wanted to do it with disregard for the boundaries of a law enforcement officer. He decided which laws applied to (the informant) and which laws didn’t apply. He did this alone.”

Defense attorney Todd Whipple said some testimony of witnesses this week was vastly inconsistent with what they previously told state investigators, and though Thompson may have broken some rules, he committed no crimes and was just doing his job in trying to root out drug activity.

He also said Thompson never saw any methamphetamine seized from the informant’s truck just before the drug buy — a key point of contention in the criminal charges and trial.

“We have blown this case way out of proportion,” Whipple told jurors. “You should not be sitting here today. Nothing important happened. This is not a big deal.”

Thompson was not re-elected in 2018, and he has denied all charges. Phil Fortner, who was undersheriff when Thompson was charged in September 2018, was elected sheriff that November and assisted the state with investigating Thompson.

According to prosecutors, Thompson arranged a drug buy on June 11, 2017 between a confidential informant and Martin James Walsh, a Twin Bridges man who was sentenced in August 2018 to 10 years in federal prison for trafficking methamphetamine.

When the informant met with officers prior to the buy, he and his vehicle were searched. Deputies testified that a meth pipe, torch and small amount of meth were found in his truck and the sheriff was nearby when they were laid out on the truck hood.

Prosecutors say the items were later given to Thompson but were never entered as evidence. In a search warrant application for Walsh’s house signed by Thompson and presented to District Judge Luke Berger the next day, Thompson wrote that the informant and his vehicle were "free of any drugs and money."

Prosecutors say photos of the meth and pipe were taken and Thompson was confronted with them nearly a year later, but gave conflicting statements about the drugs. An arrest warrant was later issued for the informant, but a dispatcher said Thompson told her to cancel the warrant, citing the wishes of the county attorney. Only judges can quash arrest warrants.

Thompson took the stand in his own defense Wednesday and said he opened a sunglasses case deputies found in the informant’s truck and saw a pipe and torch. But he said he never saw any methamphetamine and later threw away the paraphernalia because it was a minor crime and the informant was helping him land a much bigger criminal.

When a state investigator visited him in 2018, Thompson initially said drugs were found on the informant. But he testified that he was unsure of what case they were talking about at first, and when it was clear it concerned the night of the drug buy, he truthfully said he never saw any meth.

Prosecutors told jurors Thursday that the sheriff changed his story and statements about not seeing the meth were simply not believable. It was laid out on the hood of a truck for all to see and he could not have missed three small baggies that were in a tiny case with other items, they said.

“You decide if he saw methamphetamine in that case,” prosecutor David Buchler told jurors.

They said Thompson also knew he had no authority to cancel an arrest warrant but ordered it done anyway to continue protecting the informant. And because of lies he wrote in the search warrant application, Walsh’s drug trafficking conviction last year is now in jeopardy, they said.

Whipple said Thompson might have broken a rule by not preserving the drug paraphernalia, but he broke no law in throwing it away because he never intended to have the informant charged in the first place. He was after a more serious criminal.

“There is absolutely no reason the state of Montana should have brought charges against Roger Thompson,” he said.

After the verdict was read, Seeley, the judge, set a Nov. 14 status meeting with attorneys in the case to discuss a new trial date. It was not clear whether the judge would set a sentencing date on the misdemeanor in the meantime.

Debra Crow, a school teacher in the small town of Garrison, received the Montana Statehood Centennial Bell Award of Montana History Teacher of…

Former Madison County Sheriff Roger Thompson gets a hug from a supporter Thursday after a jury found him guilty of misdemeanor official misconduct. The jury was hung on felony charges against Thompson.