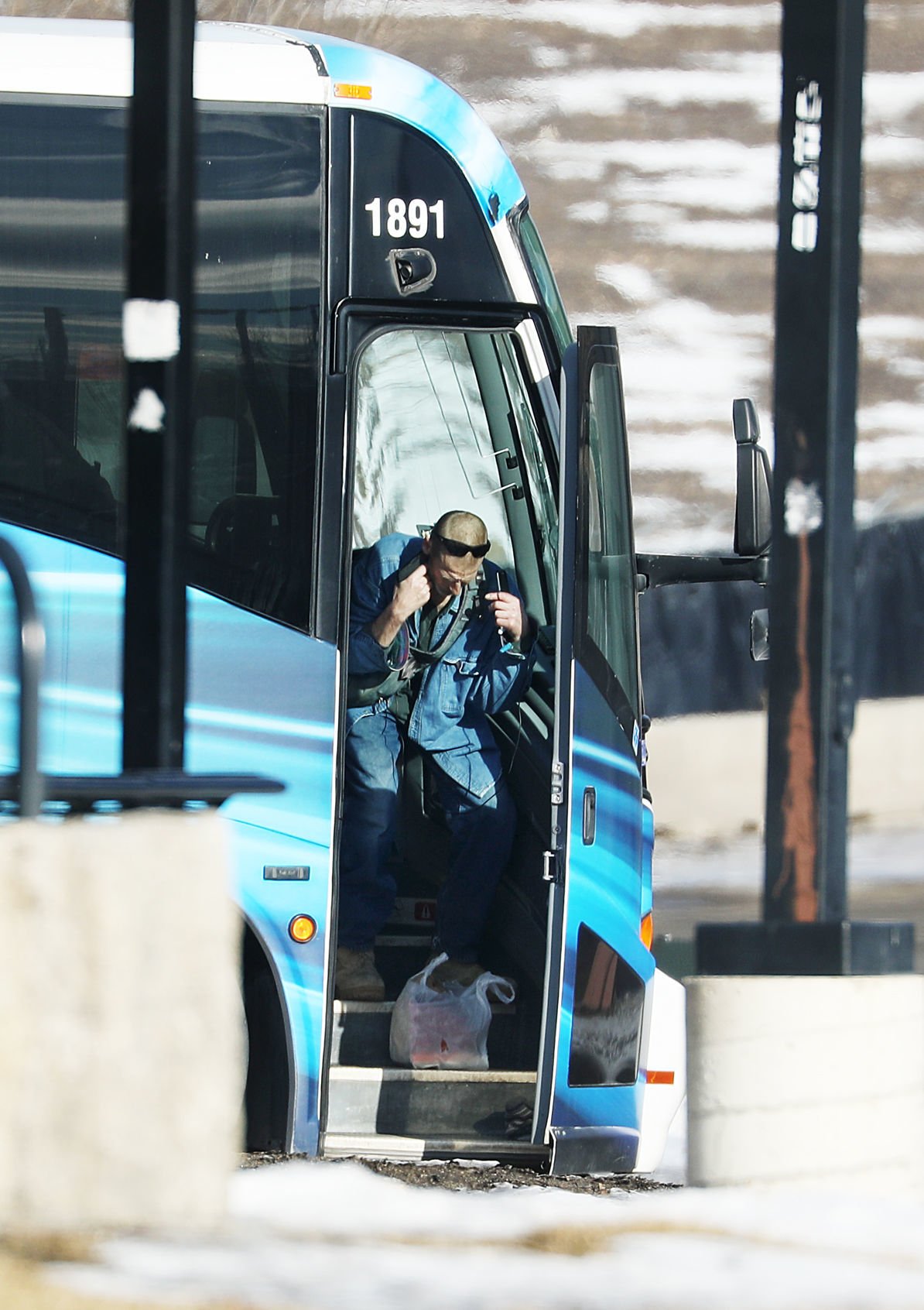 The suspect in the Jefferson Lines bus hijacking situation holds a gun to his own head in his right hand, and wires trail from his other hand as he retrieves a bag of food that police brought to him during the 10-hour standoff on Harrison Avenue in Butte. 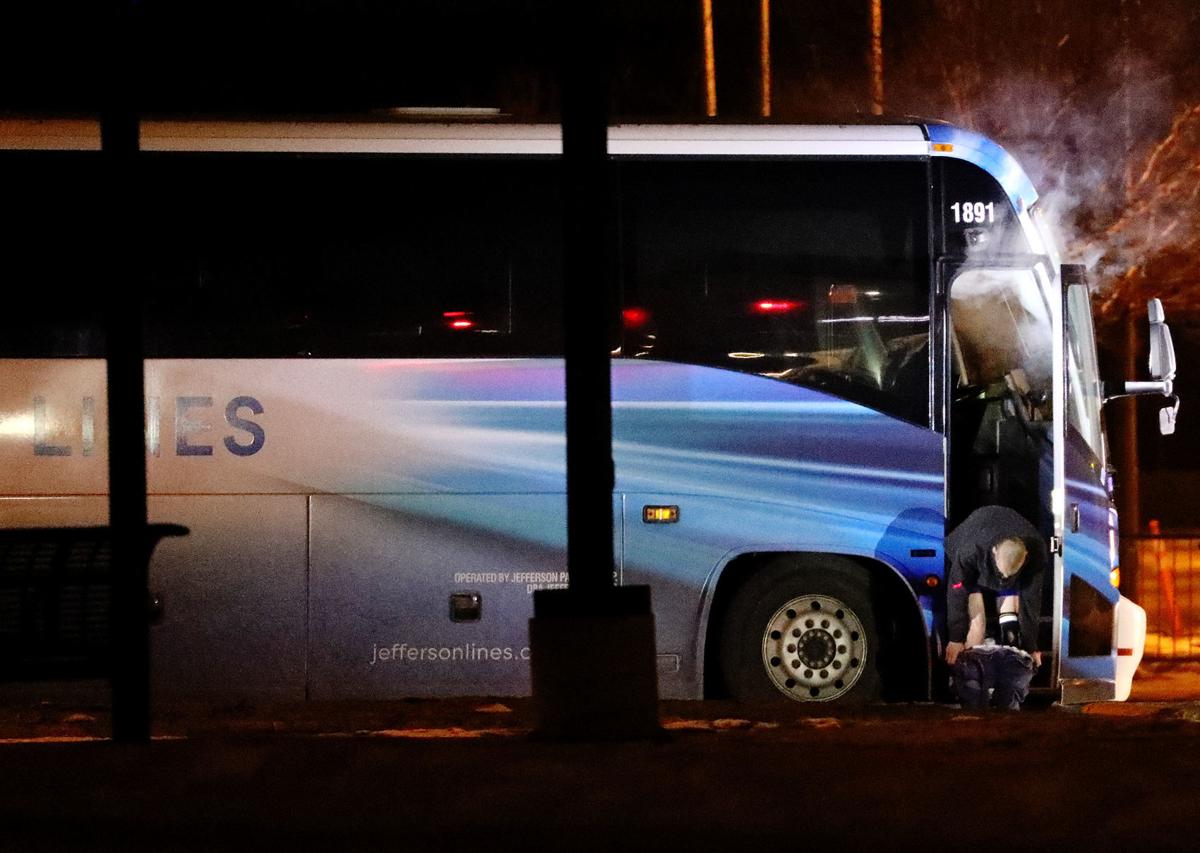 The suspect removes his clothing as smoke pours out of the bus after a standoff that lasted over nine hours on Wednesday at the Butte Civic Center. 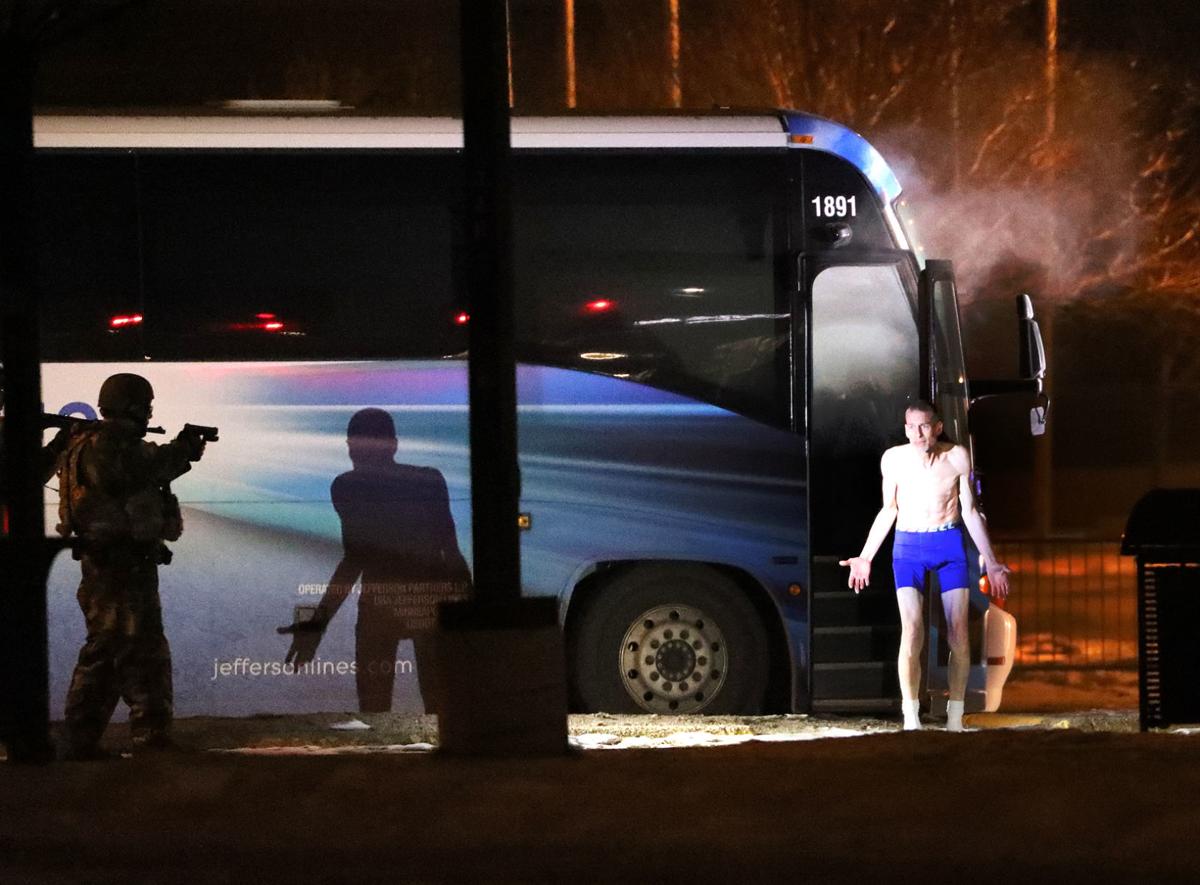 Police arrest the suspect after he exited the bus and removed his clothing as ordered.

Lester did not release the name of the suspect but did say he is a 52-year-old man from Spokane, Washington. Butte detectives are working with the county attorney’s office to determine what charges the suspect will face, which Lester said could be multiple counts of criminal endangerment, assault with a weapon, and unlawful restraint of a person.

Charges are expected to be filed in the next day or two, and the suspect will most likely appear in Justice Court on Friday, Lester said.

In his upstairs office of the Butte-Silver Bow police station Thursday morning, Lester recapped the information law enforcement received during the incident Wednesday and how they responded.

As previously reported, police received a call from the Harrison Avenue bus transfer station at 12:37 p.m. informing them that an armed man was inside of a Jefferson Lines bus with a hostage and that he may have some kind of explosive.

The call was from the bus driver, a 52-year-old man based out of Billings. According to Lester, the suspect and the hostage were the only two passengers on the driver’s bus that had left Missoula Wednesday morning. As the driver was pulling into Butte, the suspect indicated that he wanted to be taken to the courthouse, Lester said. The suspect then said he had an explosive and pointed a 380 semi-automatic handgun at the second bus passenger, a 55-year-old Butte man, as he was coming out of the bathroom.

At this point, Lester said the bus driver was able to exit the parked bus, lock the front door open, and disable the bus from being able to move any further. He then went into the transfer station and immediately called police.

“The bus driver really started the success of the whole thing because he got off of the bus, got to the back of the bus, and disabled it so we were not going to have to deal with a bus that could go mobile,” Lester said. “The driver did an outstanding job.”

After police were notified, the hours-long armed standoff ensued, involving nearly every facet of local law enforcement, Montana Highway Patrol troopers, U.S. Marshals, the FBI, and the Missoula and Lewis and Clark County bomb squads as well as Bureau of Alcohol, Tobacco, Firearms and Explosives officials.

Lester said it took a while to figure out the situation, including if and how many explosives the suspect had, and his motive.

In speaking with the suspect over the phone, he did not really indicate why he wanted to go to the Butte courthouse, Lester said. Negotiators believed he was experiencing paranoia and possibly some mental health issues, as his thoughts were disjointed and he seemed to be rambling.

However, the Sheriff said it seemed the suspect mainly wanted his grievances to be heard, including health issues and family dealings with the Department of Corrections and Child and Family Services. At one point, he even asked to speak with both Rep. Ryan Zinke and Gov. Steve Bullock, Lester said.

“He didn’t really have any demands other than the food that we got him, the water that we eventually got him, and the phones to keep the negotiations going,” Lester said. “He wanted to tell his story to the public, and he felt this was the way to get his story out."

In situations where a hostage and armed suspect are involved, Lester said law enforcement officials have a tiered set of priorities.

First, protect the public. This is why police quickly sectioned off the area of the incident and evacuated both the Civic Center and the bus transfer station.

Second, free the hostage safely. Just after 2:45 p.m., police advanced toward the open door of the bus with a plastic bag that had food, a cell phone, and a charger, Lester said. After officers delivered these demanded items, the hostage was able to give the suspect a shove, step over the food, and get out of the bus.

“We had to make sure he wasn’t the suspect and he wasn’t wired up with some kind of explosive… Then he was taken to our command post and debriefed by detectives,” Lester said about the hostage. He added that the hostage was not injured at all and was released shortly after his debriefing.

Third, protect law enforcement officers. When the suspect climbed down a few of the bus steps to retrieve the bag of food and the phone, Lester said officers could see him holding a gun to his head with one hand and some sort of device in the other, which was connected to wires leading into a bag on his back.

From this point moving forward, Lester said law enforcement on scene worked to determine how heavy the suspect’s bag was so they could estimate the volume of suspected explosives and their potential blast radius. As they worked on these calculations and continued to negotiate on and off with the suspect, afternoon quickly turned to night.

Fourth, bring the suspect into custody without injuring him or law enforcement officers. Just before 8:30 p.m., officers with shields brought a second set of demanded items to the bus, which Lester said was water and a second phone. The bus had lost power, and the suspects' two other phones were nearly dead, Lester said.

Some time after the items were delivered, Lester said a sniper scope and the scope on one of the bomb squad robots helped officers see the suspect digging various toiletry items out of his backpack. Officers were then able to determine that if there were explosives in the bag, there must not be many, Lester said.

At this point, Lester gave the go ahead to approach the bus and deploy first an explosive breaching device, which caused a flash and a loud bang, followed by capsules of pepper spray and a tear gas grenade. After these chemical agents were deployed around 9:25 p.m., Lester said the suspect left his handgun on the floor of the bus and exited the front door.

As several red dots were pointed on his body, the suspect was instructed to strip down to his underwear.

“I think he was probably stunned by the loud crash at the beginning of the operation,” Lester said. “He was given verbal commands to take off his clothes so we could determine if he had anything wired to him or not, and he did.”

Lester said any time there is a hostage and a guy who says he has a firearm and explosives, that’s a bad situation — then when you put it into a tubular structure, like a bus, it presents a lot of tactical challenges and makes things slow down considerably. Overall, he said the situation couldn’t have ended any better than it did, thanks to the collaboration of law enforcement and community resources.

“You train and train and train in hopes that you never have to use this kind of training, but unfortunately we did, and it worked,” Lester said. “I can’t say enough about the resources that were provided to us… It was certainly a way bigger operation that just the police department. It was a community-wide effort, and that’s why we live in Butte.”

Butte-area crime roundup for the week of Jan. 28-Feb. 3

Todd Schreier, a former Butte businessman, has been sentenced to federal prison for conspiracy to commit health care fraud due to his particip…

Gunman on bus gives up, arrested Wednesday night, with no gunshots fired

A bang and a flash rang out around 9:25 p.m. Wednesday in the Butte Civic Center parking lot before cops swarmed a bus and at last apprehended…

John Michael Peck told a judge he was ready to turn his life around, but he was sentenced to the Montana State Prison for five years for leadi…

Most of Montana dodged the arctic blast that brought blistering cold to the High Plains and Midwest this week, but winter is taking a sharper …

Dane Anthony Gibson, the 52-year-old man accused of hijacking a bus and holding a man hostage on Wednesday, made his initial appearance in But…

In a bizarre court hearing Thursday, a man accused of hijacking a bus and holding a man hostage outside the Civic Center told a judge his publ…

The suspect in the Jefferson Lines bus hijacking situation holds a gun to his own head in his right hand, and wires trail from his other hand as he retrieves a bag of food that police brought to him during the 10-hour standoff on Harrison Avenue in Butte.

The suspect removes his clothing as smoke pours out of the bus after a standoff that lasted over nine hours on Wednesday at the Butte Civic Center.

Police arrest the suspect after he exited the bus and removed his clothing as ordered.