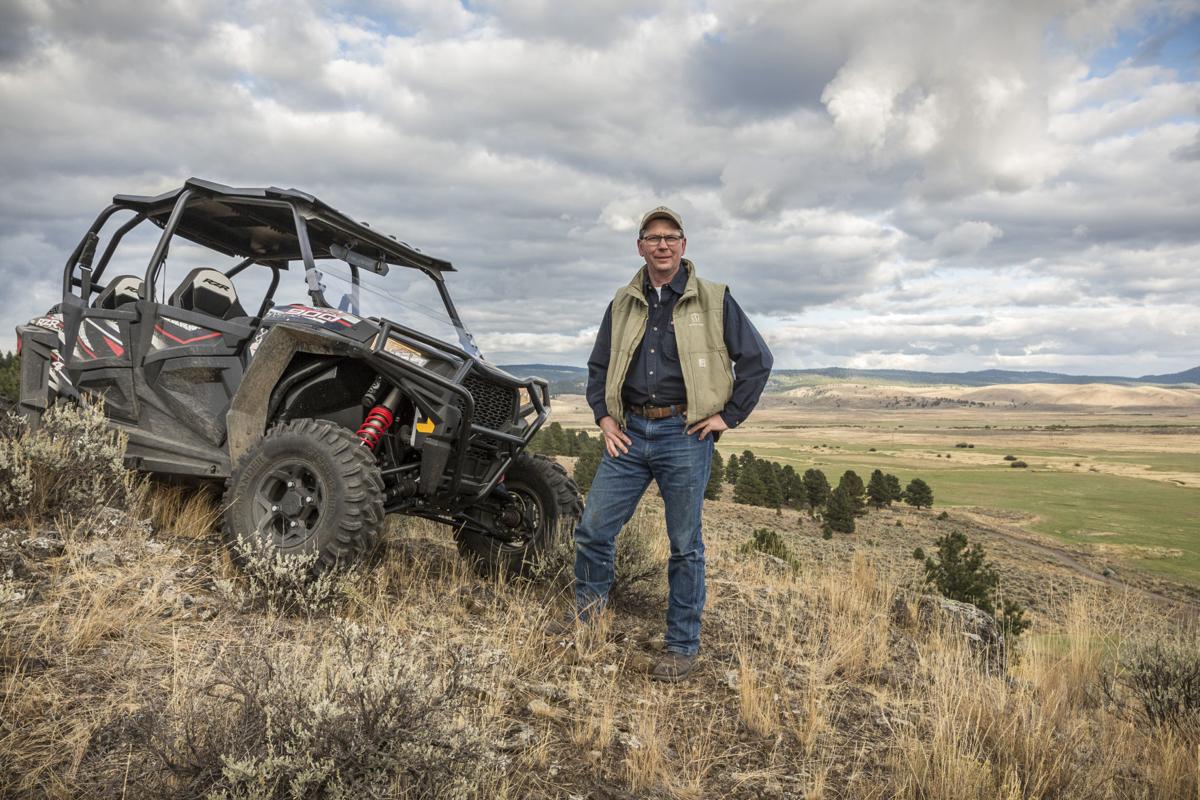 In this Sept. 21, 2017 photo provided by Silvies Valley Ranch, Colby Marshall, vice president of Silvies Valley Ranch poses for a picture in Burns, Ore. Silvies Valley Ranch owns five bulls that were found dead with sex organs and tongues removed. The deaths of the bulls recall 1940s mutilations of livestock across the West and Midwest that struck fear in rural areas, and caused people to carry guns. Marshall believes a cult is behind the bull deaths. 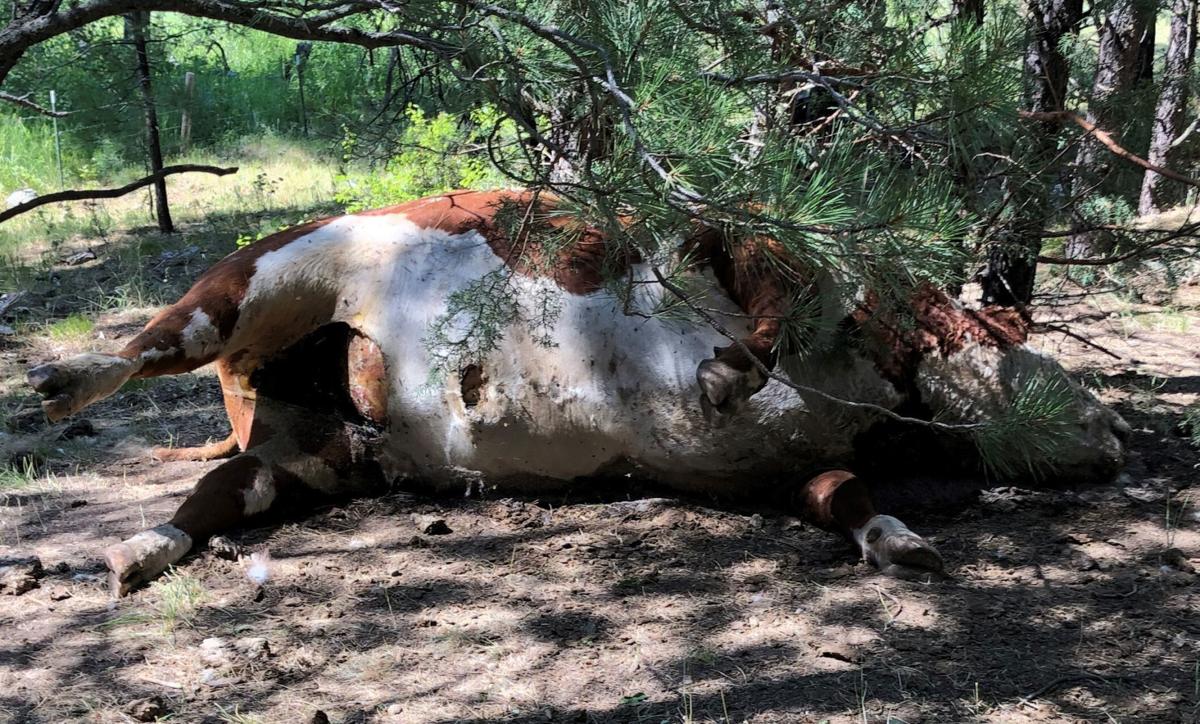 In this recent photo provided by Silvies Valley Ranch, a Hereford bull lies dead in Burns, Ore., This was one of five apparently healthy bulls that were found dead and with sex organs and tongues removed. 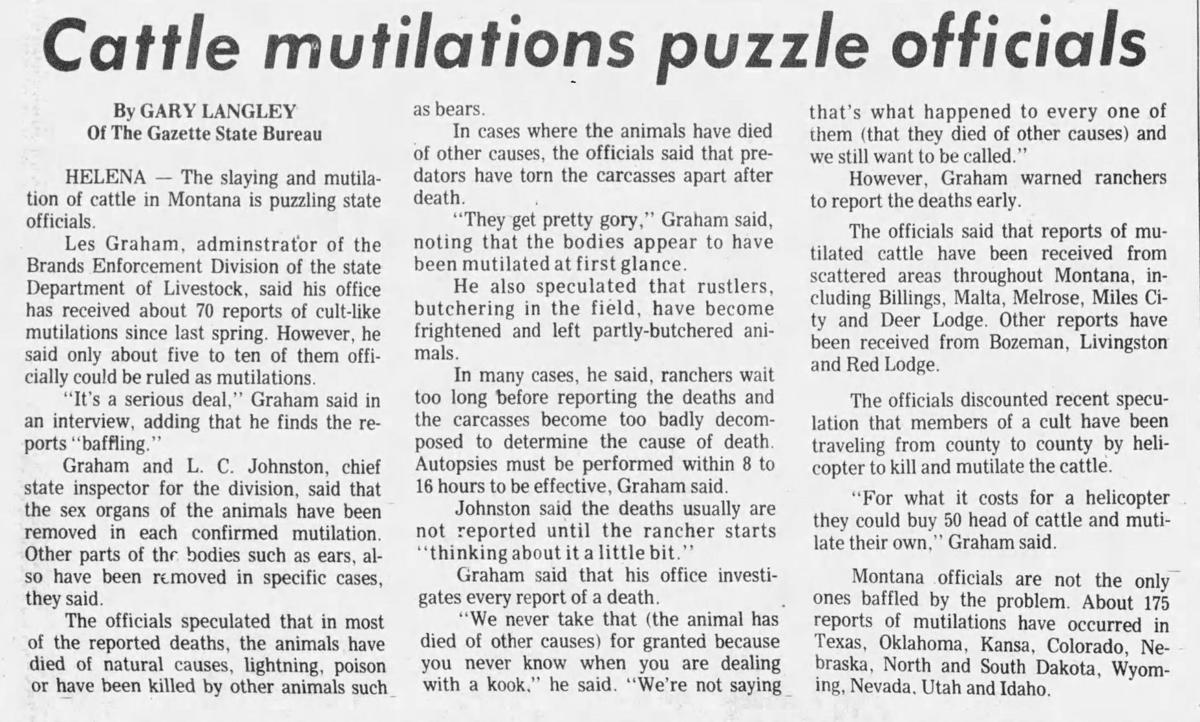 Montana cattle mutilations, as reported in the Billings Gazette October 10, 1975.

SALEM, Ore. — The first dead bull was found in a timbered ravine in eastern Oregon. There was no indication it had been shot, attacked by predators, or had eaten poisonous plants.

The animal’s sex organs and tongue had been removed. All the blood was gone.

In the next few days, four more Hereford bulls were found within 1.5 miles in the same condition. There were no tracks around the carcasses.

Ranch management and law enforcement suspect that someone killed the bulls. Ranch hands have been advised to travel in pairs and to go armed.

Ever since the bulls were found over several days in July, Harney County sheriff’s Deputy Dan Jenkins has received many calls and emails from people speculating what, or who, might be responsible.

The theories range from scavengers such as carrion bugs eating the carcasses to people attacking the animals to cause financial harm to ranchers.

Jenkins, who is leading the investigation that also involves state police, has run into only dead ends and has no witnesses.

“If anyone has concrete information or knows of any cases that have been solved in the past, that would definitely be helpful,” he said.

Colby Marshall, vice president of the Silvies Valley Ranch that owned the bulls, has another theory: “We think that this crime is being perpetuated by some sort of a cult.”

The case recalls mutilations of livestock across the U.S. West and Midwest in the 1970s that struck fear in rural areas. Thousands of cattle and other livestock ranging from Minnesota to New Mexico were found dead with their reproductive organs and sometimes part of their faces removed.

Ranchers began carrying guns. Folks said helicopters had been heard around the kill sites. A federal agency canceled an inventory by helicopter of its lands in Colorado, worried that it would get shot down.

A couple of U.S. senators urged the FBI to investigate, according to FBI documents. After saying it lacked jurisdiction, the FBI agreed to investigate cases on tribal lands. But the mutilations stopped.

Former FBI agent Kenneth Rommel, who headed the investigation, said there was no indication that anything other than common predators were responsible.

Cases have emerged sporadically since then. In the 1980s, a few cows were found dead and mutilated in eastern Oregon. More recently, there have been cases on a ranch near Flagstaff, Arizona.

Some of the mutilations can be attributed to natural causes. An animal drops dead, the blood pools at the bottom of the carcass, it bloats, and the skin dries out and splits. The tears often appear surgical. Carrion bugs, birds, and other scavengers go for the soft tissues.

Dave Bohnert, director of Oregon State University’s Eastern Oregon Agricultural Research Center in Burns, said he believes people killed the most recent bulls because there is no indication they were felled by predators or had eaten poisonous plants.

However, the state of the carcasses could be attributable to nature, said Bohnert, who is not officially investigating the case.

If people killed the bulls, a motive could be to financially harm the ranch, he said, noting that breeding bulls cost thousands of dollars each, and the 100-plus calves each of them sire are collectively worth much more.

Marshall doubts it was a malicious attack on the ranch, which employs 75 people, many from local communities. Silvies Valley Ranch covers 140,000 acres of deeded and leased National Forest lands around a mile above sea level.

In 2006, a veterinarian bought the ranch and made it a combination working ranch and elite destination resort. It has four golf courses, a spa, shooting ranges, and fishing and luxury cabins going for up to $849 per night.

Marshall suspects the bulls were killed to get the organs of the free-ranging bulls for some reason. The bull parts would be available cheaply or free at a slaughterhouse, but he believes some people are going to a lot of trouble to get these parts on the range.

There’s no sign that scavengers removed the organs of the bulls, and instead someone using a knife or scalpel probably did, Marshall said.

“To lose a completely healthy animal would be an oddity,” Marshall said. “To lose five young, very healthy, in great shape, perfect bulls that are all basically the same age ... that is so outside the bounds of normal activity.”

Marshall speculates the bulls were darted with a tranquilizer that knocked them out. While some people acted as lookouts, others bled the animals out by inserting a large-gauge needle into the tongue and into an artery, then removed the organs after the heart stopped beating, he surmised.

Jenkins, the deputy, has a similar theory.

“Personally, I would lean more toward the occult, where people for whatever reason — whether it's a phase of the moon or whatever rituals they're going to do with their beliefs — are coming to different areas and doing that,” he said.

The Oregon Cattlemen’s Association is offering a $1,000 reward for information leading to the conviction of those responsible. The ranch is offering $25,000.