The Roman Catholic Diocese of Helena responded to a lawsuit alleging a Butte Central High School teacher sexually exploited two female students and committed other transgressions by blaming the couple making the claims and trying to shame victims, the couple’s lawyers say.

Attorneys at Vicevich Law in Butte also say the diocese, which oversees Butte Central High School, “outed” the couple by naming them in a news release responding to the lawsuit, even though the suit itself publicly names John and Heather Stenson as the plaintiffs.

Heather Stenson, meanwhile, told The Montana Standard she and her husband didn’t know about allegations of sexual misconduct by Butte Central math teacher Brad Kadrmas until their lawyers told them last week. Still, they are among the multiple allegations made in their lawsuit against Butte Central Schools, the diocese and Kadrmas' wife, Amy, 42.

Stenson said she still didn’t know who the alleged sexual abuse victims or their parents were but thought their attorneys would provide such details to police.

“I would assume they would have to,” Stenson said.

When their attorney, Lawrence Henke, was asked about that Wednesday, he declined to comment, citing attorney-client privilege. He said Tuesday he had talked to a police detective, but would not discuss anything about the conversation.

Sheriff Ed Lester said that the claims spelled out in the lawsuit were the only information police had.

“One of our investigators did speak to the attorney who filed the complaint in court,” Lester said Thursday. “The attorney did not provide names of potential victims. If we are able to identify possible victims, we will initiate an investigation.”

Amy Kadrmas was charged criminally in late December for allegedly providing alcohol and marijuana to two minors at Central last year, when she and her husband were living in an apartment on the high school campus. That case is still pending.

Brad Kadrmas has not been charged and isn’t named as a defendant in the lawsuit, even though the most serious claims of sexual misconduct with minors are against him. He is on administrative leave from the school and efforts to contact him and Amy Kadrmas have been unsuccessful.

Stenson said she and her husband weren’t trying to get a lot of money from Butte Central or the diocese, only unused tuition for one of their sons and payment for counseling sessions he is taking in relation to some of the events. They decided to go through with the suit Friday and it was filed in District Court in Butte on Monday, she said.

“Our attorneys said we can drop it now and just move on or make it public, and the only reason we wanted to make it public is because we knew there were other kids (who are victims) out there,” Stenson said.

The lawsuit accuses Amy and Brad Kadrmas of providing alcohol, cigarettes and marijuana to minors. It also claims that Brad Kadrmas engaged in sexual activities with one girl student, had an “unwanted and illegal sexual relationship” with another girl and traded grades for their silence. Six unidentified minors are named as victims in the lawsuit.

It names as defendants Amy Kadrmas, Butte Central High School, Butte Central Schools, the Montana Catholic Conference, the Diocese of Helena and the Roman Catholic Bishop of Helena. Henke declined to say why Brad Kadrmas isn’t named as a defendant.

The diocese issued a release Tuesday acknowledging the Stensons had filed the lawsuit and noting its basic allegations. It said Butte Central worked with police in the investigation that led to the criminal charges against Amy Kadrmas in late 2019.

But the diocese said it first learned of the sexual allegations against Brad Kadrmas on July 22, immediately contacted police and asked the Stensons’ attorney to provide contacts for the unidentified minors’ parents or guardians.

“The Stensons' attorney declined this request,” the diocese said. "The diocese will continue to pursue a path for preliminary investigation but at this time cannot verify the alleged sexual abuse in this third-party complaint. No direct or verifiable reports or allegations of abuse by Brad Kadrmas have been made.”

The diocese said it does not tolerate harmful actions toward children, especially abuse, and will look into the complaints further and work closely with law enforcement.

“Abuse towards a child is an evil and criminal act and is simply unacceptable,” Bishop Austin Vetter stated in the news release.

Vicevich Law responded with its own release Wednesday saying the diocese in their statements had attacked the Stensons for filing the suit and blamed them for conduct that “was, in fact, prompted by the diocese and its entities.”

“I found it particularly repugnant that the diocese chose to respond by placing John and Heather Stenson in the forefront and not emphasizing the tragic consequences of these events,” Henke says in the release.

Even though the lawsuit names the Hensons as plaintiffs, and that was public information once filed in court, the firm says the diocese named the Stensons unnecessarily and sent “a message to victims that if they speak out, they will be named, and it will be publicized to the media.”

“Overtly ‘blaming the victim’ is a historical response tactic, attacking those who make the allegations,” the Vicevich release says.

The firm says while investigating the actions of Butte Central involving one minor, it learned of additional acts of negligence. It says initial allegations of Brad Kadrmas’ misconduct were presented to the diocese in February and it responded by “attacking the victim.”

It says the diocese presented 14 defensive questions to the Stensons, each placing blame on one minor, and asked for information about that minor’s counselors and grades.

“The diocese went on to later threaten a countersuit for malicious prosecution and abuse of the process if the entirety of the allegations which there were provided in February 2020 and July 2020 were made public in a lawsuit,” the firm says.

It says no human decency was shown to the Stensons about one minor child “for the impact to their family … through counseling or assistance.”

It says the additional allegations against Brad Kadrmas were presented to the diocese this month and the diocese was given the opportunity to discuss matters and work with the Stensons toward a resolution.

“Instead, the diocese responded combatively and refused to agree to a rational discussion of the matter,” the law firm said, so the Stensons decided to proceed with filing the lawsuit.

The Standard forwarded the release to the diocese on Thursday and Brad Bartleson, director of communications for the diocese, later responded with two statements.

“The July 27th (lawsuit) filing made the Stensons and their minor child’s identities public,” he said. “The diocese’s victim-first approach in this matter remains in place. No identity of any alleged victim that is not made public knowledge will be shared from any verifiable report.”

As to reaching out to victims, Bartleson said, “On December 6 of 2019, a Diocese of Helena official spoke with and delivered an open-ended offer of the provisions of counseling and support for Heather Stenson and her child.

“This was in response to verified abuse of a minor. However, there was no first-person report or mention of sexual abuse at that time.” 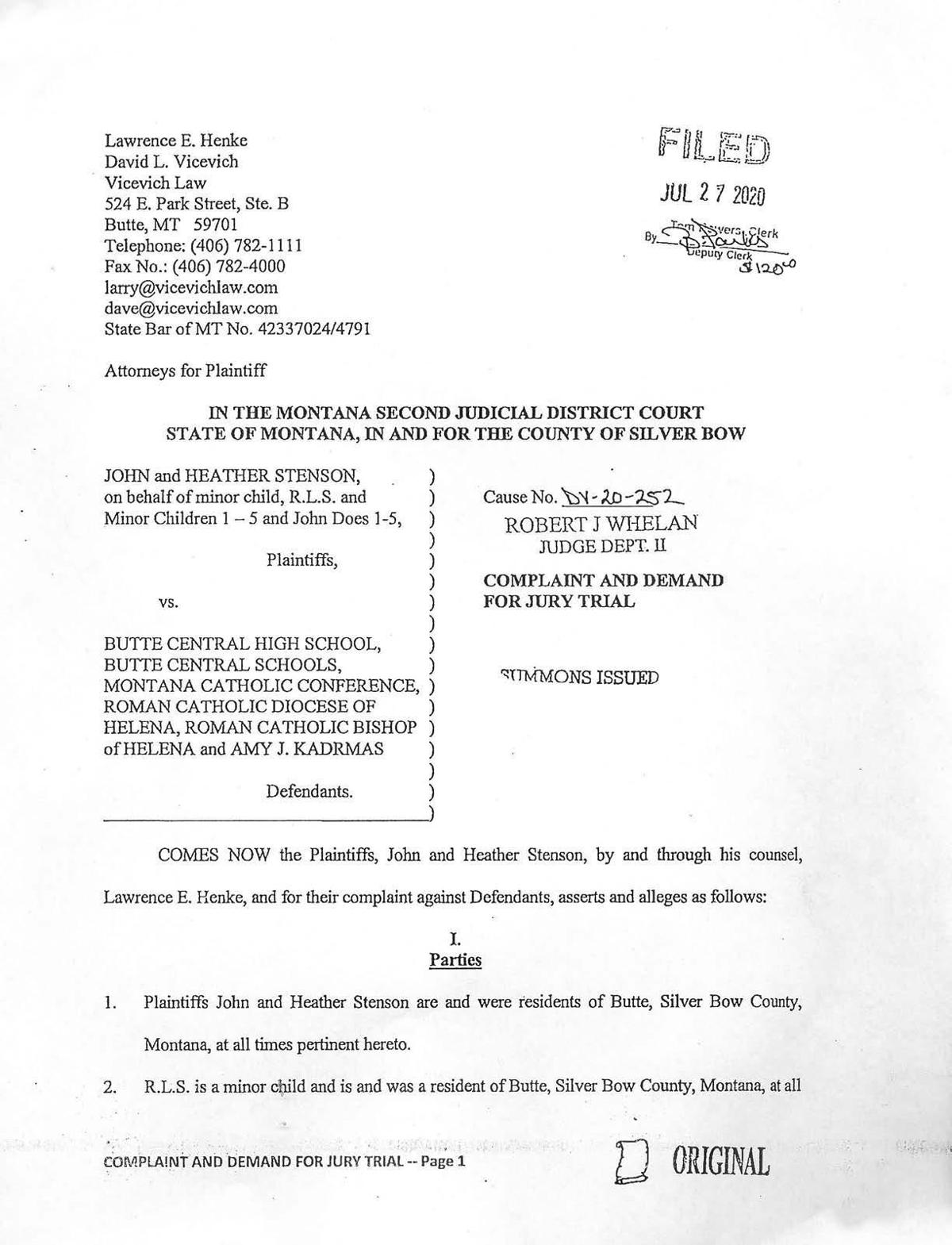 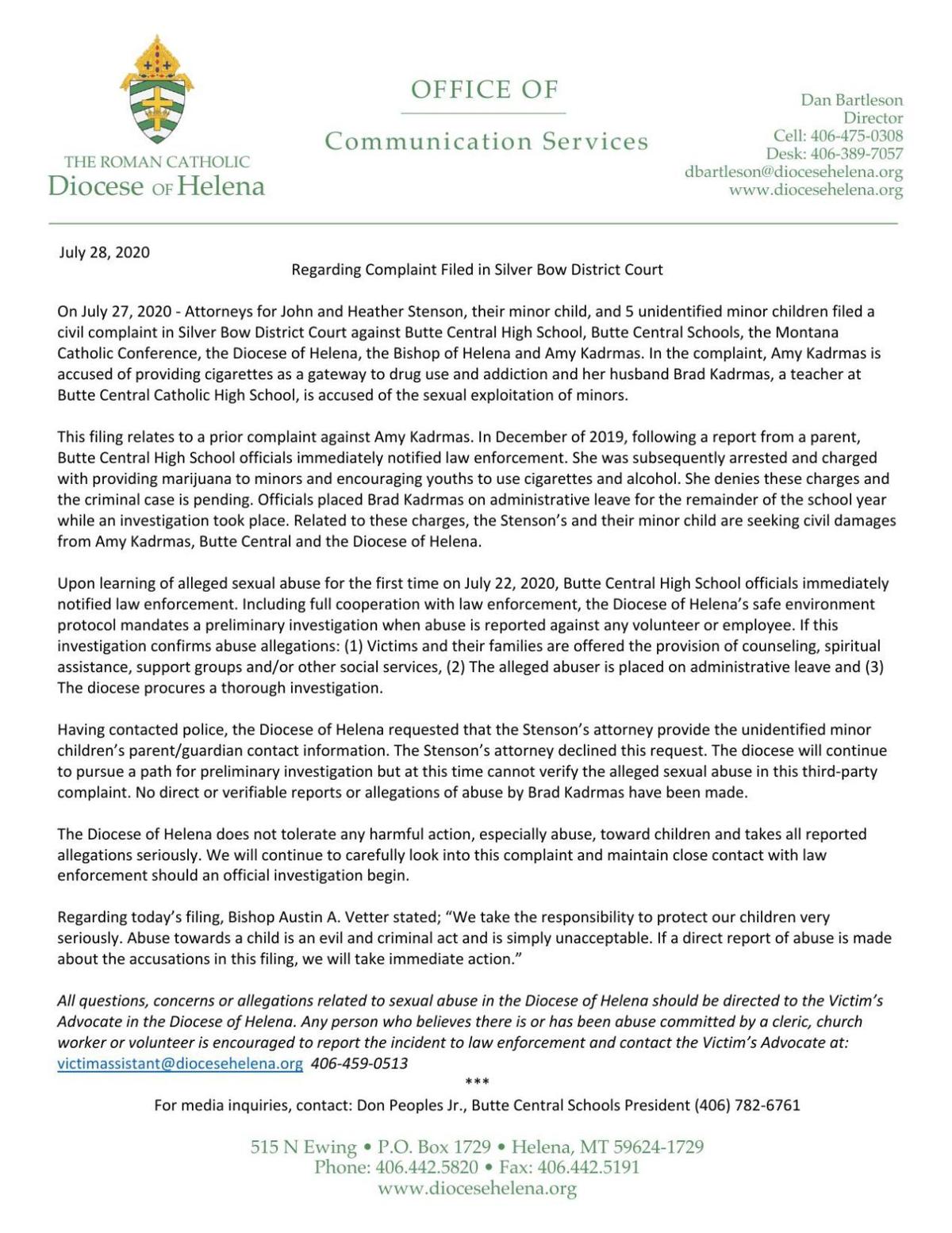 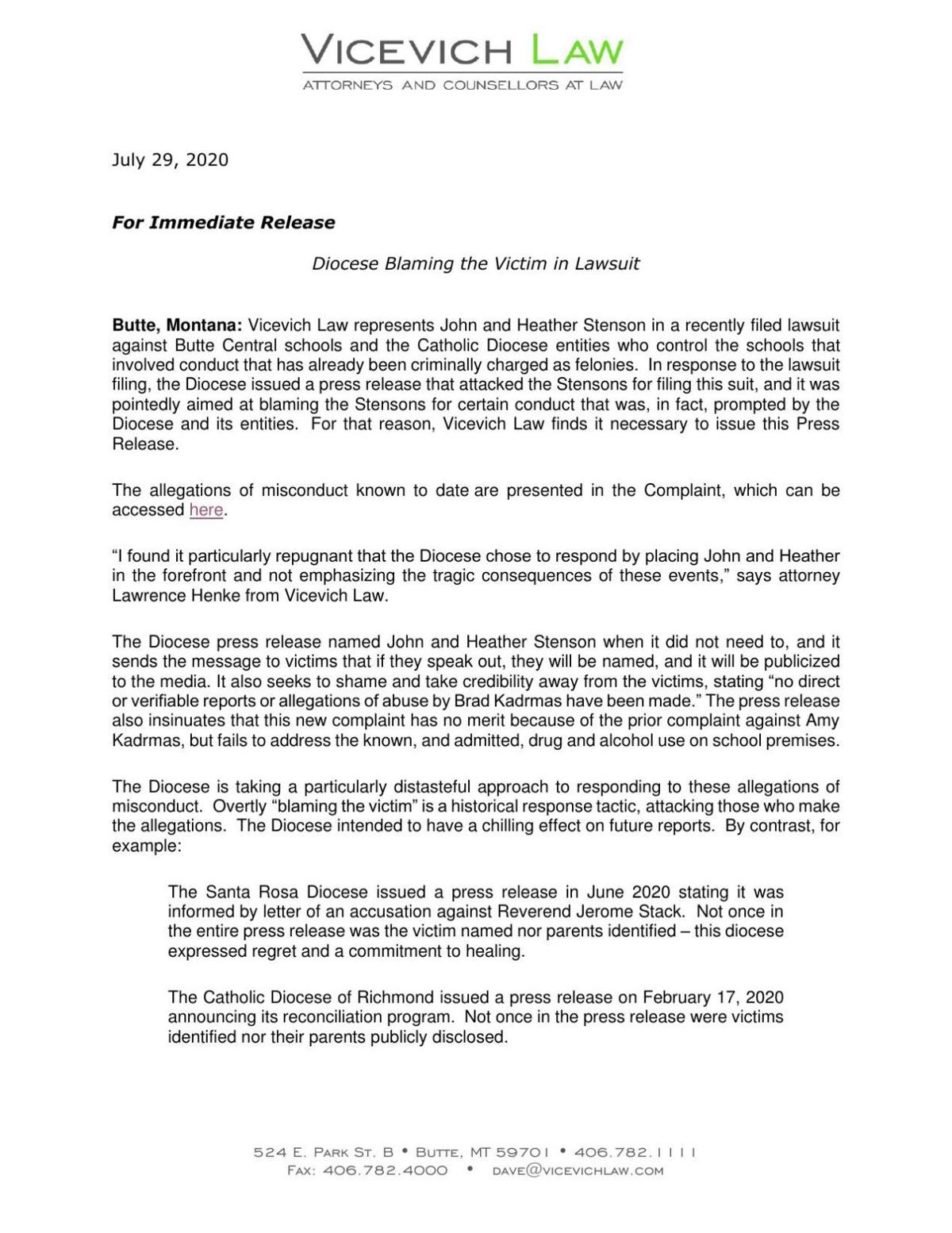