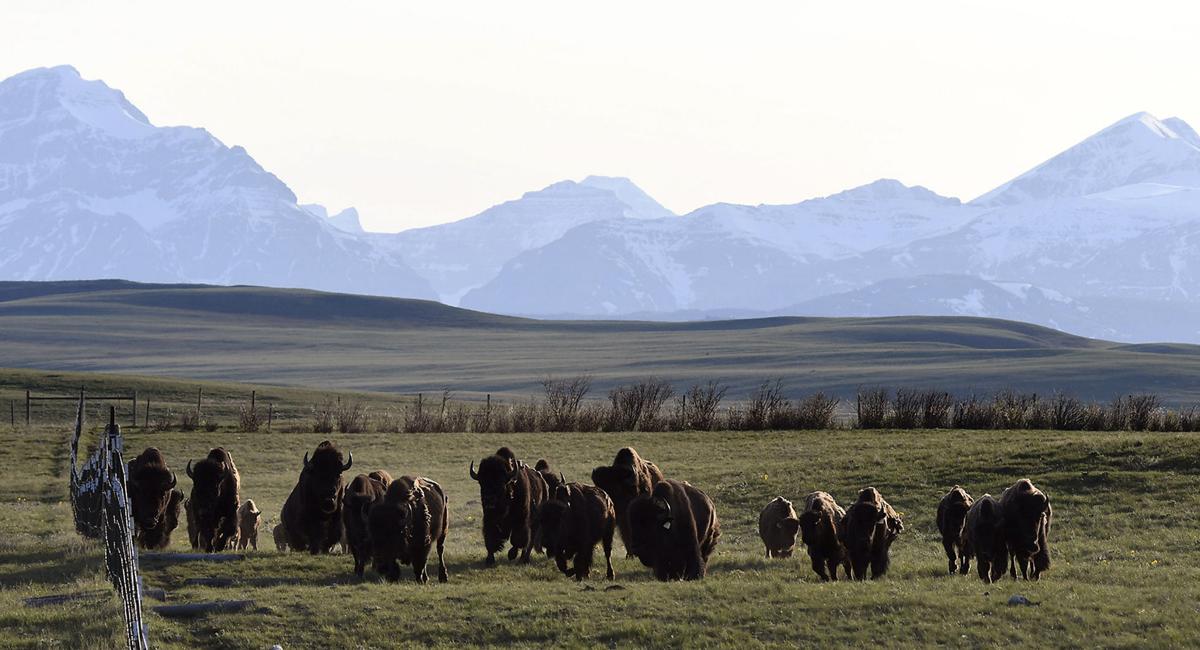 With Glacier National Park in the background, part of the Elk Island herd runs along a fence line in an area just named the "Buffalo Spirit Hills" that borders Highway 89 south of Browning. 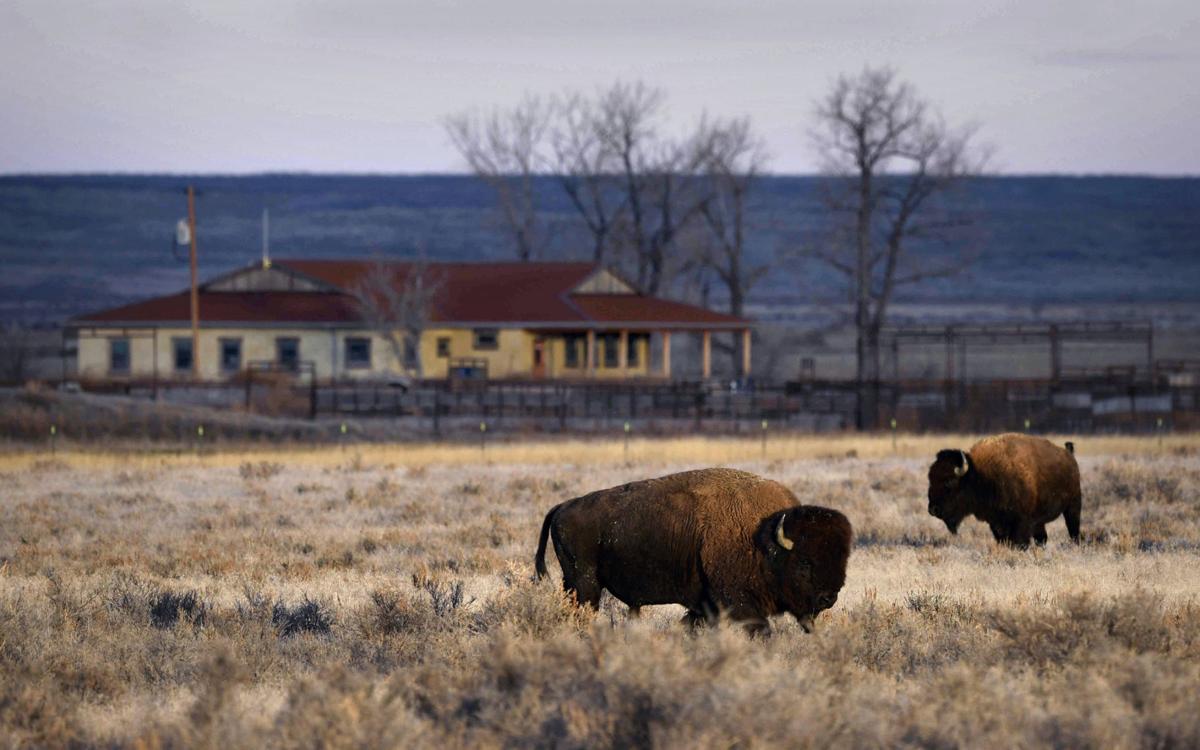 Bison roam the grassland outside the American Prairie Reserve's Enrico Education and Science Center built on the Sun Prairie Unit south of Malta. The private wildlife refuge has brought controversy and a fear for the end of the region's traditional cattle ranching way of life.

Sorting out who’s upset with whom over the recent Montana bison management moves is about as easy as herding buffalo.

Gov. Greg Gianforte on Friday warned the U.S. Department of Interior that a future bison transplant to the Charles M. Russell Wildlife Refuge in northeast Montana should be a state decision. But the federal government hasn’t announced any plans for such a reintroduction.

Gianforte previously announced a settlement on April 20 with United Property Owners of Montana (UPOM) declaring the state wouldn’t undertake its own bison relocation process in the refuge for 10 years.

UPOM represents ranchers in the area opposed to a bison reintroduction project by the nonprofit American Prairie Reserve (APR). But APR representatives say they weren’t the focus of the previous Democratic Gov. Steve Bullock’s effort to allow wild, free-roaming bison in the region. They are happy to keep their herd of roughly 800 animals considered domestic livestock.

Then on April 27, members of the Montana American Indian Caucus sent a letter to Interior Secretary Deb Haaland proposing a multi-tribal plan to restore large herds of wild bison on the Russell refuge. The letter also mentioned Blackfeet Tribal plans to establish a herd on the Rocky Mountain Front and across the U.S.-Canada boundary. But that’s not part of the settlement agreement the Gianforte administration signed with UPOM.

On Friday, UPOM representative Chuck Denowh said he didn’t object to Native American tribes restoring bison on their reservations, although he would resist efforts to let them roam freely as wildlife outside reservation boundaries.

Denowh also said the settlement restricting the Montana Department of Fish Wildlife and Parks from coming up with another bison environmental impact statement for the Missouri Breaks area was really focused on the American Prairie Reserve.

“What FWP was considering was a deal with APR to turn domestic bison into wild bison in and around the area that APR operates,” Denowh said. “There was a comment in a document we found that ‘this thing reads like an APR brochure.’ That’s a pretty strong indication that’s what the (Environmental Impact Statement) was centered around.”

Not true, according to APR Vice President Pete Geddes.

“The EIS set out a process where people could propose to establish bison as wildlife outside of Yellowstone National Park,” Geddes said. “It set up local involvement for stakeholders. We did not submit a proposal, and have no intention of doing that. We want to have the largest conservation herd on the landscape in the U.S. And if we have to own them in perpetuity, we will do that.”

The Charles M. Russell Wildlife Refuge covers about 1.1 million acres — a space the size of Glacier National Park — around the distinctive U-L Bend of the Missouri River west of Fort Peck Reservoir. The U.S. Fish and Wildlife Service manages it. It’s surrounded by other public land managed by the federal Bureau of Land Management, numerous private ranches, and APR’s collection of properties and leaseholds totaling about 420,000 acres.

That northern swath of Montana also holds the reservations of the Blackfeet, Rocky Boy’s, Fort Belknap and Fort Peck Indian communities. All but Rocky Boy’s Reservation already have resident bison herds, and that last outlier is planning to acquire its own herd soon.

In its findings, the drafters noted the region of the CMR was historically known as the “Buffalo Commons” in treaties between several Tribes and the U.S. Government. Those treaties and other court decisions “supports the concept of a partnership between the Department of Interior and a confederation of Tribes to establish a bison herd on public lands in Montana. Bison with reputable genetics that descended from those that historically ranged across the Northern Great Plains are available to initiate an intertribal bison herd.”

The Russell refuge also has enough intact prairie grasslands to make possible large-scale bison restoration, the plan noted. The April 27 letter from the Tribal caucus was in the works before Gianforte’s settlement announcement, according to co-author Rep. Tyson Running Wolf, D-Browning.

“That was the idea on the (Russell refuge) grasslands, have the Department of Interior help push that a little further with legislation or policy and at the federal level,” Running Wolf said. “It would be separate from APR. This would have a different cultural aspect for Native Americans in Montana. The reservations are going to keep going forward on their Tribal lands with restoration of wild buffalo on their landscape. I hope the state becomes partners with us on it.”

That’s unlikely, according to Denowh and his clients in the ranching community. They object to free-roaming bison for several reasons. Chief among them are the sheer strength of a free-roaming bison and the potential that it might carry an expensive disease.

“Bison have a greater potential for property damage, and they’re a known vector of diseases, brucellosis chief among them, that affect cattle and humans,” Denowh said. “The bison advocates love to say there’s never been recorded transmission of brucellosis from bison to cattle. The reason that is, is because we’ve done such a good job keeping cattle away from bison.”

Brucellosis causes ungulates, including cows and bison, to abort their calves. It also can cause a malaria-like sickness in people who drink infected milk. The disease originally got into bison herds of Yellowstone National Park from infected domestic cattle herds, and has also passed into wild elk herds. The Yellowstone bison acquired by APR and the several reservation herds have all been through multi-year quarantine programs to certify they are brucellosis-free.

Running Wolf and others pushed back on Denowh’s claim that ranchers have kept their cattle safe by restricting bison. On the contrary, it was because of untreated cattle that brucellosis has got into wild ungulates.

“We’ve testified in the last four or five legislative sessions alongside the Tribes on bison issues, and they’ve had a very difficult time getting heard by legislature and by this governor,” Fischer said. “I think they see a real opportunity with Secretary Haaland to finally give them a voice and some more clear direction in terms of bison. There’s progress being made at the federal level. Even in the Trump administration there was forward progress on bison.”

Fischer referred to former Interior Secretary David Bernhardt’s support for the Wolakota Buffalo Range on the Rosebud Sioux Reservation, which with more than 1,200 bison is the biggest Indian-managed herd in the nation. That includes 35 animals donated by the APR.

Denowh maintains that previous state efforts to place bison next to ranches has soured relations between property owners and the Montana Department of Fish, Wildlife and Parks. The UPOM settlement’s 10-year moratorium should provide a cooling-off period for those feelings to settle, he said.

But the feelings, and the debate, may not remain between just the state government and local ranchers. Bison are the United States’ national mammal, and nationwide surveys have shown consistent support for its restoration after the pre-settlement herds of nearly 50 million animals were reduced to mere dozens by slaughter and disease.

“There are still some people who are mad about the Upper Missouri Breaks Monument getting declared,” Fischer said. “For that matter, there are people who are mad about how Fort Peck Dam flooded the best grazing land in the Missouri bottomland (in 1933). We understand that folks don’t want to quit as ranchers and run a B&B. There’s a lot of history and pride in ranching. So it’s more a question of how do we bring folks along as partners, instead of standing on both sides of the fence and throwing grenades at each other.”

Are animals using social distancing to protect themselves from infections?

Fauci: US to spend $3.2B for COVID antiviral pills

Fauci: US to spend $3.2B for COVID antiviral pills

The Stillwater County Coroner’s Office has identified the two men killed Wednesday in an accident at the Stillwater Mine near Nye.

With Glacier National Park in the background, part of the Elk Island herd runs along a fence line in an area just named the "Buffalo Spirit Hills" that borders Highway 89 south of Browning.

Bison roam the grassland outside the American Prairie Reserve's Enrico Education and Science Center built on the Sun Prairie Unit south of Malta. The private wildlife refuge has brought controversy and a fear for the end of the region's traditional cattle ranching way of life.