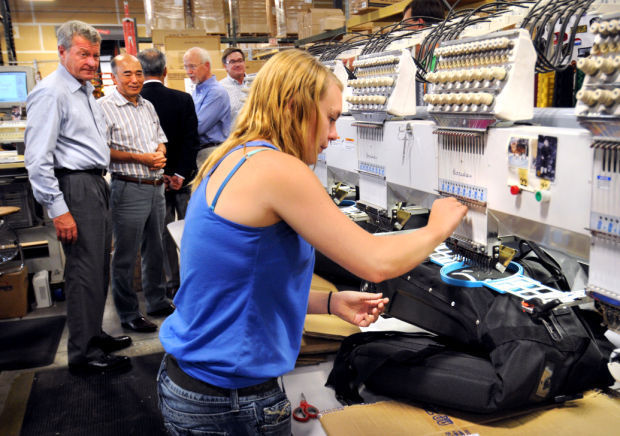 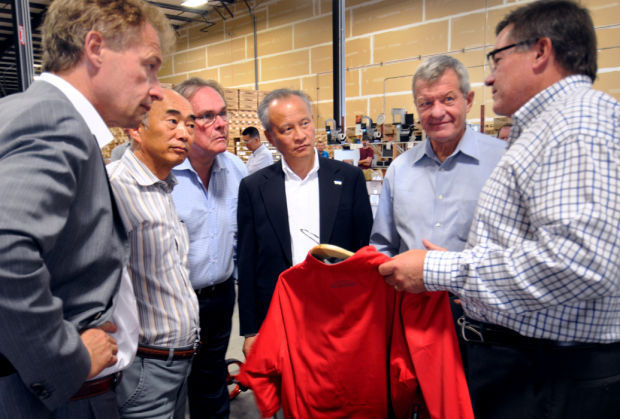 The business world came to Missoula’s Sun Mountain Sports on Friday afternoon, and then went to the KettleHouse Brewing for a beer.

“International trade never seems that far away for us,” Sun Mountain chief financial officer Blake Ludwig said as representatives of some of the United States’ biggest business partners toured the manufacturing plant with Democratic U.S. Sen. Max Baucus. “This is how relationships are formed. If you can parlay that relationship into a friendship, you might get some consideration in a foreign country.”

That included giving Chinese Ambassador Cui Tiankai a seat on one of Sun Mountain’s newest rolling golf bags, which has a built-in stool. Japanese Ambassador Kenichiro Sasae reminisced with Baucus about his childhood in the family’s textile mill.

“As a little boy, he used to run around the plant all day,” Baucus said as he and Sasae inspected a line of embroidery machines that sews team names onto golf bags. “This company has only been able to grow this well through international business. They’re adding value here to basic flat golf bags.”

German Ambassador Peter Ammon and Peruvian Ambassador Harold Forsyth rounded out the delegation. The group started the day in Kalispell with a tour of Applied Materials’ manufacturing plant before coming to Missoula. Over the weekend, the delegation will also visit Bozeman, Helena and Butte.

Sun Mountain partner David So of New Bright Handbag Factory Ltd. in Hong Kong and Guangdong, China, was also present for the visit. So said his company and Sun Mountain have been together for 20 years. The 200 employees at the Missoula plant take Ho’s bag components and customize them for international markets.

During the tour, Ludwig said he hopes Baucus could renew a tariff measure that expired last year. The Miscellaneous Tariff Bill reduced the duty Sun Mountain paid on imports from 7 percent to 1.5 percent. Ludwig said the increased sales revenue Sun Mountain would pay taxes on would more than offset any loss of tariff revenue to the government.

“That affects businesses all over the country,” Ludwig said. “If it passes, it will keep our cost structure where it is today. If it doesn’t pass, everybody in the country will pay more for golf bags.”

Even the beer stop had an international subtext. Montana barley and beer are both gaining foreign admirers.

“Half of Montana’s barley goes overseas,” Baucus said. Japan is the state’s largest customer of wheat, buying more than 50 million bushels in 2011. But the country still maintains an average agricultural tariff of 15.7 percent, and keeps limits on imports of American beef. China effectively bans American beef.

Trade tours produce results, according to Baucus spokeswoman Jennifer Donohue. A 2010 Montana visit by the ambassador to Chile was followed by that country opening its markets to American beef. After a similar tour in 2011, Baucus announced Montana trade deals with South Korea, Colombia and Australia.

“Manufacturing has been a bright spot for Montana throughout this tough economy,” said Baucus, chairman of the Senate Finance Committee. “Showcasing our top-notch facilities and unbeatable quality for some of the world’s most important trading partners will help create new opportunities to sell Montana products across the globe and support jobs here at home.”

Reporter Rob Chaney can be reached at 523-5382 or at rchaney@missoulian.com.

Baucus to be named U.S. ambassador to China

HELENA – President Barack Obama will appoint Sen. Max Baucus, D-Mont., as the next U.S. ambassador to China, bringing to an end the Montanan’s…

US to fly in baby formula on military contracted jets