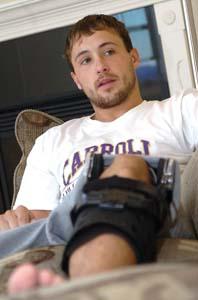 Roman Morris rests Monday at his brother’s house in Helena. The Carroll College freshman wide receiver was bow hunting with two friends near Gardiner Saturday when a female grizzly bear attacked him. Morris, 21, of White-water, fought with the bear as it bit and clawed, severed his left hamstring, punctured his shoulder, chomped at his head and tossed him around. AP photos, 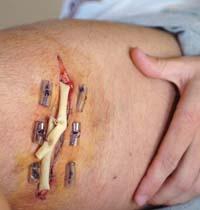 Morris displays an eight-inch-long bear bite that severed several muscles in his hamstring.
By The Associated Press - 10/10/2007

BILLINGS (AP) — A Carroll College student is recovering from a severed hamstring and other injuries suffered when he was mauled by a grizzly bear while bow hunting over the weekend.

Roman Morris, who is a freshman wide receiver on Carroll’s football team, said he was crouched on a hillside north of Gardiner at dawn Saturday when a female grizzly bear walking by turned and attacked him.

‘‘It charged down the hill and just drilled me,’’ said Morris, 21, of Whitewater.

Over the next 30 to 45 seconds, Morris fought with the bear as it bit and clawed, severed his left hamstring, punctured his shoulder, chomped at his head and tossed him around.

The bear ran off after a friend fired a pistol. Morris underwent surgery at a Livingston hospital and was recuperating Monday at his brother’s house in Helena.

‘‘I still have a pretty dang good headache from the whole thing,’’ he told The Billings Gazette in a telephone interview.

The doctor told him he can’t put pressure or weight on his injured leg for the next month or so and that it could be about a year before it’s back to normal.

Morris, who was not on the Carroll football team’s traveling squad for Saturday’s game at Montana Tech in Butte, said he and his brother, Mitch, and friend, Josh Love, were bow hunting for elk in the Beattie Creek area north of Gardiner.

They had split up before Morris was attacked.

Morris said as he and the bear slid downhill, he held the bear’s head and pounded away with his fist.

The grizzly put a 2-inch hole in Morris’ shoulder and bit at his head several times, but the slick outer layer on his hooded jacket apparently prevented the bear from clamping down.

‘‘That jacket probably saved my life,’’ he said.

Morris said he tried to play dead, but also kept pushing the bear away as it bit and slapped at him.

Finally, the grizzly tore into his left leg — leaving a deep 9-inch gash — and tossed him, perhaps five to eight feet.

‘‘I don’t know how you can stay still when it sinks its teeth into you,’’ Morris said.

The bear kept picking him up and dropping him. Then the attack stopped.

His friend had fired a shot and the grizzly took off.

Morris and the two others hiked a mile or so to the car.

A section of Yellowstone National Park west of Gardiner has been temporarily closed due to the attack, park officials said Tuesday. The same area of the park was closed from Sept. 14-18 after another bow hunter was mauled by a bear.

The Gallatin National Forest also closed the Beattie Creek and Tom Miner basin areas due to the weekend attacks.

Morris said he doesn’t understand why the bear attacked because he didn’t think her three cubs were under any threat.

In any case, Morris said the grizzly seemed to be doing more than just defending itself.

‘‘It was looking at me like I was an easy meal,’’ Morris said.

Evacuations had been ordered by the Finley Point/Yellow Bay Fire Department about 1 a.m. Sunday as winds pushed the fire across Highway 35 north of Polson and toward the lake.

The two men applied for over $1,043,000 in PPP loans last year between April and December. In the applications, the men allegedly made numerous false statements about having paid payroll taxes and having employees.

A 45-year-old Spokane, Washington man suspected of being under the influence was driving a Chevrolet Suburban the wrong way on the interstate on Saturday evening near Whitehall, the Montana Highway Patrol reported.

COVID renews interest in radiation, but docs caution against pilgrimages to radon-filled mines

While radon is commonly known as a hazardous gas removed from basements, people in pain travel to Montana and pay to breathe, drink and bathe in its radioactive particles.

The law has made Montana the only state in the country that prohibits private businesses from requiring employees to get vaccinated.

The pressure loss left Crossroads Correctional Center without drinkable water and unable to flush the toilets in their cells.

“The system’s hanging on by a shoestring right now,” said Matt Bugni, the chief executive officer of AWARE, Inc.

Portia Fleming fell asleep on the couch at her home at Finley Point Estates watching a movie Saturday night, only to be awakened by her daughter warning of fire nearing their property.

Michael B. DeFrance, the ex-boyfriend of Jermain Charlo, who disappeared in 2018, appeared in federal court Monday afternoon.

Roman Morris rests Monday at his brother’s house in Helena. The Carroll College freshman wide receiver was bow hunting with two friends near Gardiner Saturday when a female grizzly bear attacked him. Morris, 21, of White-water, fought with the bear as it bit and clawed, severed his left hamstring, punctured his shoulder, chomped at his head and tossed him around. AP photos,

Morris displays an eight-inch-long bear bite that severed several muscles in his hamstring.
© Copyright 2021 The Montana Standard, 25 West Granite Street Butte, MT | Terms of Use | Privacy Policy
Powered by BLOX Content Management System from TownNews.com.
You don't have any notifications.