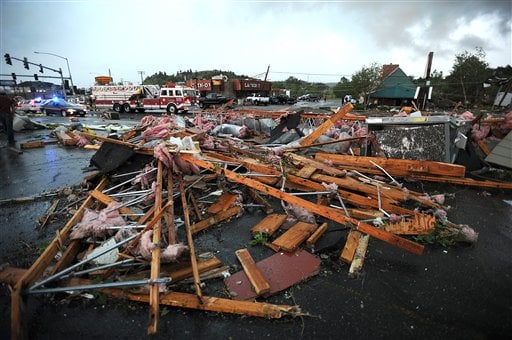 Building debris is scattered after a tornado touched down near the corner of Main Street and Lake Elmo Drive in Billings on Sunday, June 20. 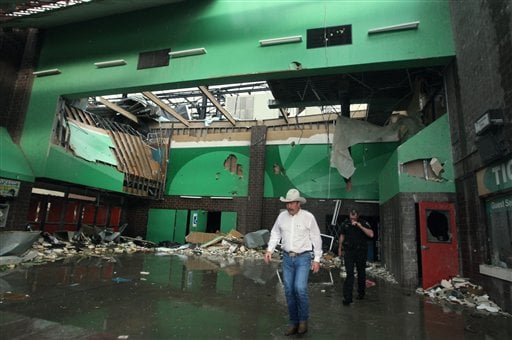 Yellowstone County Commissioner John Ostlund walks out of the Rimrock Auto Arena at MetraPark in Billings, Mont. after a tornado destroyed the 12,000-seat facility on Sunday, June 20.
Matt Brown, Associated Press Writers
BILLINGS (AP) - A tornado that ripped the roof off a sports arena Sunday evening also tore through businesses, damaging a bar and a casino and leaving just the walls of an auto glass shop standing.

The tornado struck at about 4:30 p.m. as a big storm system with golf ball-sized hail passed through the area, National Weather Service meteorologist Keith Meier said.

After running through Main Street in the city's northeast area, the twister quickly moved toward the 10,000-seat Rimrock Auto Arena about a half-mile away, where it hovered for about 15 minutes, snapping trees and telephone poles.

Big pieces of metal could be seen hanging from power lines near the arena, and tangles of insulation and metal debris were strewn for hundreds of yards in the surrounding industrial area.

There were several employees inside the arena when it struck, but there were no reports of injuries, Baukema said.

Billings police Lt. Mark Cady said the only reported injury was from someone who got hit in the head by a hail stone. City officials were struggling to deal with power outages and flooding from the storm, which sent about 2 feet of water into many city streets.

Wind speeds from the tornado were estimated to range between 111 and 135 mph, Meier said. The last time Yellowstone County, which includes Billings, had that scale of a tornado was July 2, 1958, he said.

John Schilling said he saw the tornado approach Sunday as he was driving north on Main Street with his son. He had taken shelter under a carport at a motel because of the heavy hail and strong winds.

After a few minutes, Schilling saw the twister envelop the Main Street Casino and a laundromat, then start to head south in his direction, hitting other businesses as it went.

"Then the roof came flying off that print shop, so we kept going," the 42-year-old said. "I wasn't going to stick around."

The tornado also picked up the roof from the Fas-Break Auto Glass and dumped it into a nearby creek. At least 10 businesses along the street suffered some sort of damage.

Fas-Break owner Kevin Massick and several members of his family picked through the rubble of the shop, trying to salvage what they could. But there was little left.

"I'm in a total daze," Massick said, his face creased with emotion and tears welling up in his eyes. "It's a total loss, I don't know what I'm going to do. Start over, I guess."

Main Street was shut down in one direction several hours after the tornado struck as bulldozers cleared debris. The other direction was jammed with cars that slowly moved northbound as drivers and passengers gawked at the destruction.

Buildings near the arena at the MetraPark expo center, which also includes a racing track and several pavilions, appeared to have suffered little damage. The arena is the center's main venue and often hosts rodeos, monster truck shows, concerts and graduation ceremonies.

Crews were working to shut off a gas leak at a commercial strip mall near Main Street, authorities said. Utility crews were also working to repair downed power lines.

BILLINGS (AP) - A tornado that ripped the roof off a sports arena in Billings Sunday evening also tore apart a casino, bar and laundromat in the city's downtown area.

The tornado also picked up the roof from an auto glass shop, then dumped it into a nearby creek. Nothing but the walls of the shop could be seen standing.

The tornado struck Sunday at about 5 p.m. as a big storm system with golf ball-sized hail passed through the area, Trooper Toman Baukema of the Montana Highway Patrol said.

After running through downtown's Main Street, the twister moved toward the 10,000-seat Rimrock Auto Arena in a nearby industrial area, where it snapped nearby trees and telephone poles. Big pieces of metal could be seen hanging from power lines, and tangles of insulation and metal debris were strewn for hundreds of yards in the surrounding area.

Baukema said he saw the tornado hover over the arena for about 15 minutes.

There were several employees inside the arena when it struck, but there were no reports of injuries, Baukema said.

Crews were working to shut off a gas leak at a commercial strip mall, about a mile away from the arena, Baukema said.

Several funnel clouds were seen in and near Billings late this afternoon, including one that apparently hit Rimrock Auto Arena at MetraPark.

Witnesses said significant damage was done to the arena.

Billings resident David Meduna was dropping off cardboard at Pacific Steel at the east end of Fourth Avenue North when a golf-ball sized hail began pummeling .

He then saw what he described as an "F-2" tornado form over MetraPark, "tearing up the ground."

Although a building obscured his view of individual buildings at the fairgrounds he saw chunks of boards and siding flying in the air.

The funnel cloud appeared to be about 12 feet across at the top and narrowed into a small cone.

About 4:30 p.m., another motorist traveling from Ballantine to Billings along Interstate 94 reported seeing three funnel clouds - one near Huntley, one at Metra Park and one near Lockwood.

There also have been reports of gas main leaks, windows knocked out of businesses and cars floating in flooded areas.

North 30th and 29th streets are flooded with cars getting stuck.

Water has risen in the Billings Clinic parking lot up to the tops of car wheels.

Just before 5:30 p.m. another funnel cloud was sighted near Shepherd.

A tornado has touched down in the Heights doing significant damage to the MetraPark arena and other buildings in the area.

More details will be made available.

A tornado warning has been issued for Billings and Southeast Montana.

Read Monday's Montana Standard in print and online for more details and photos.

Watch Now: Biden wants to raise taxes on the wealthy

Watch Now: Biden wants to raise taxes on the wealthy

Watch Now: How much will space travel cost?

Watch Now: How much will space travel cost?

“I was not expecting that this would be the thing that would nearly kill me,” Nathaniel Kaiser said.

A member of the public blamed the health officer for his wife's recent death due to COVID-19.

Body found in Wyoming believed to be Gabrielle Petito

Authorities say a body discovered Sunday in Wyoming is believed to be Gabrielle “Gabby” Petito.

A Darby man with a long criminal history — including prison time for poaching — was sentenced to five years in prison recently for illegal outfitting and possessing parts of unlawfully killed animals.

Postcard from an overrun ICU: ‘The problem is we are running out of hallways’

In the past week, 14 people have died of covid here, the state’s largest hospital.

Health officials in both Missoula and Bozeman are begging Montana residents to wear masks indoors and get vaccinated as hospitals face increasing strain and the state remains without any statewide health mandates.

A Washington man has died in Yellowstone National Park and a search continues for his camping partner.

Building debris is scattered after a tornado touched down near the corner of Main Street and Lake Elmo Drive in Billings on Sunday, June 20.

Yellowstone County Commissioner John Ostlund walks out of the Rimrock Auto Arena at MetraPark in Billings, Mont. after a tornado destroyed the 12,000-seat facility on Sunday, June 20.
© Copyright 2021 The Montana Standard, 25 West Granite Street Butte, MT | Terms of Use | Privacy Policy
Powered by BLOX Content Management System from TownNews.com.
You don't have any notifications.