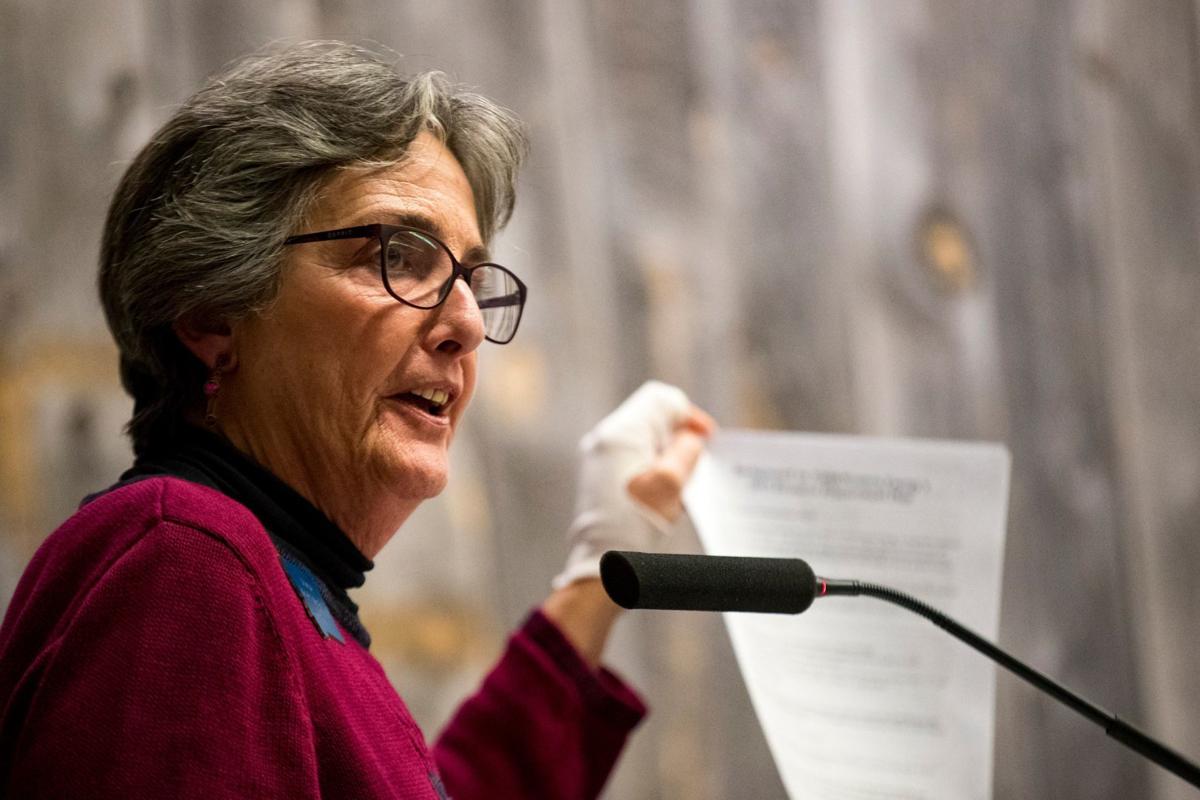 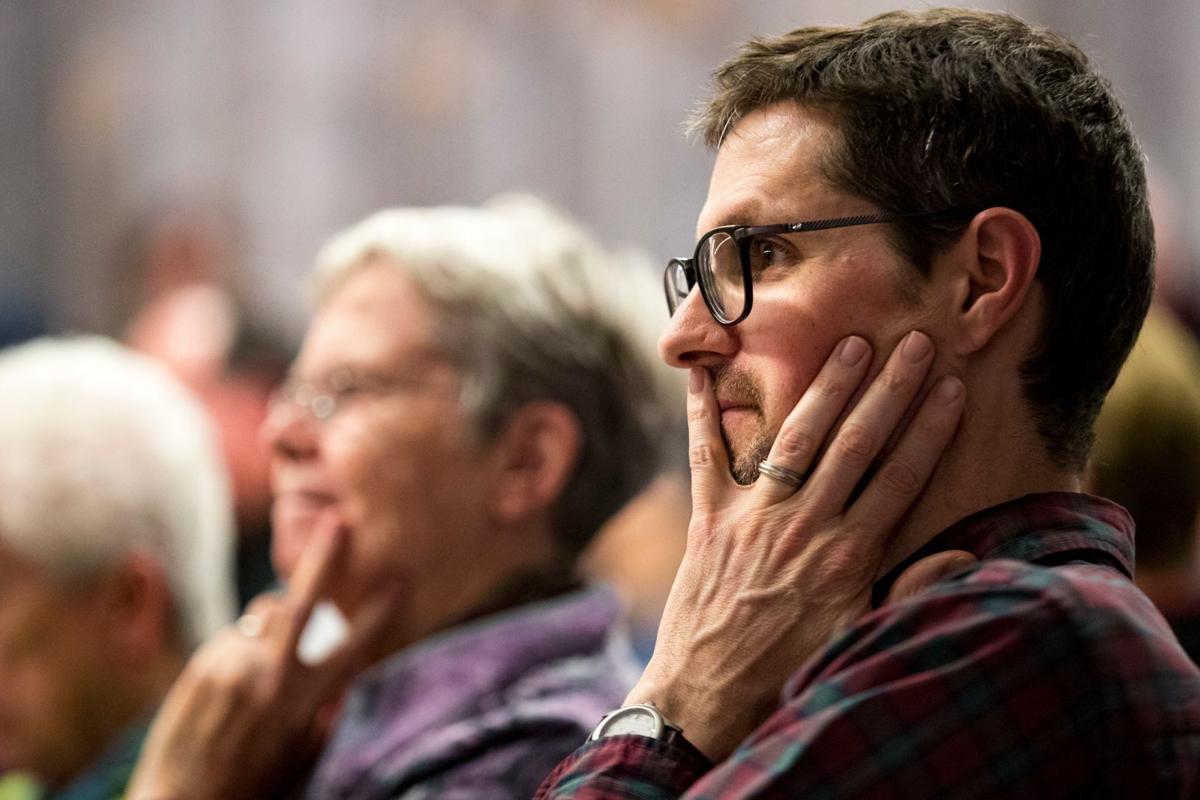 Ed Gulick, a member of the Northern Plains Resource Council, listens during the Montana Public Service Commission Listening Session for the Northwestern Energy Resource Plan at the Billings Public Library in Billings on Thursday, Jan. 2, 2020. 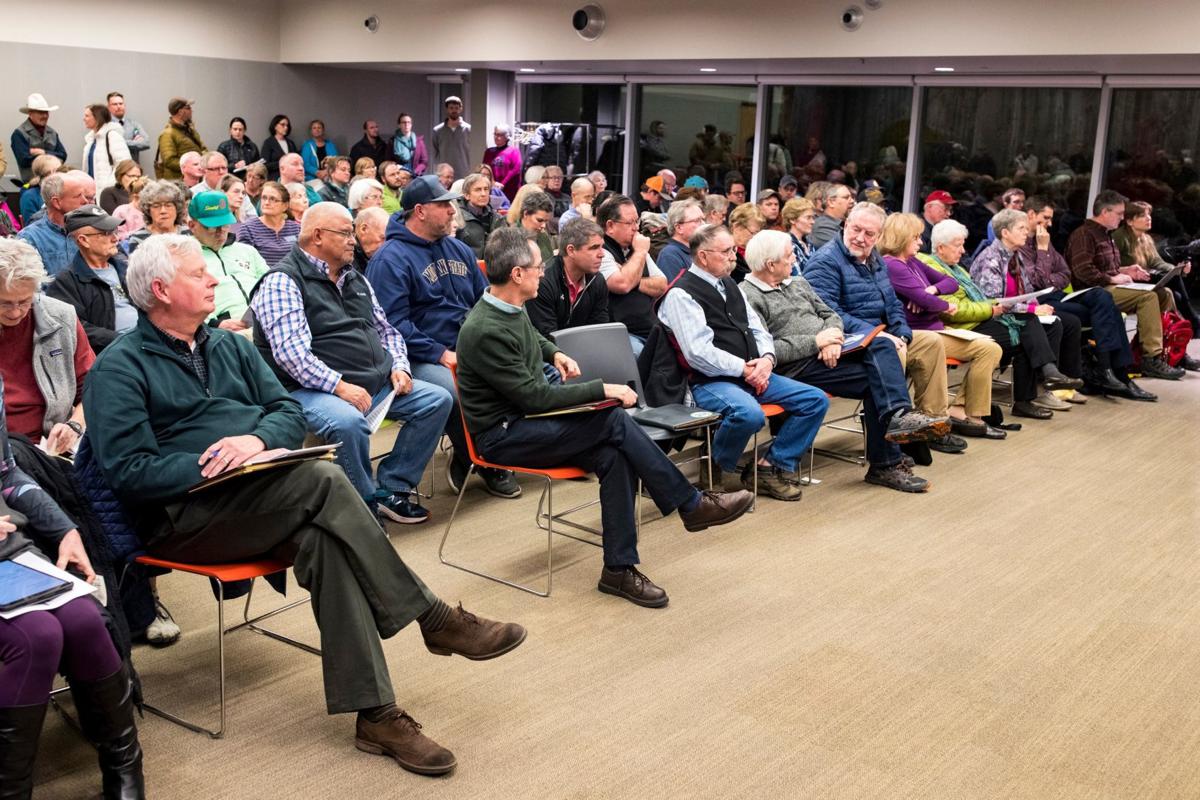 About 120 people attended the Montana Public Service Commission Listening Session for the Northwestern Energy Resource Plan at the Billings Public Library in Billings on Thursday. 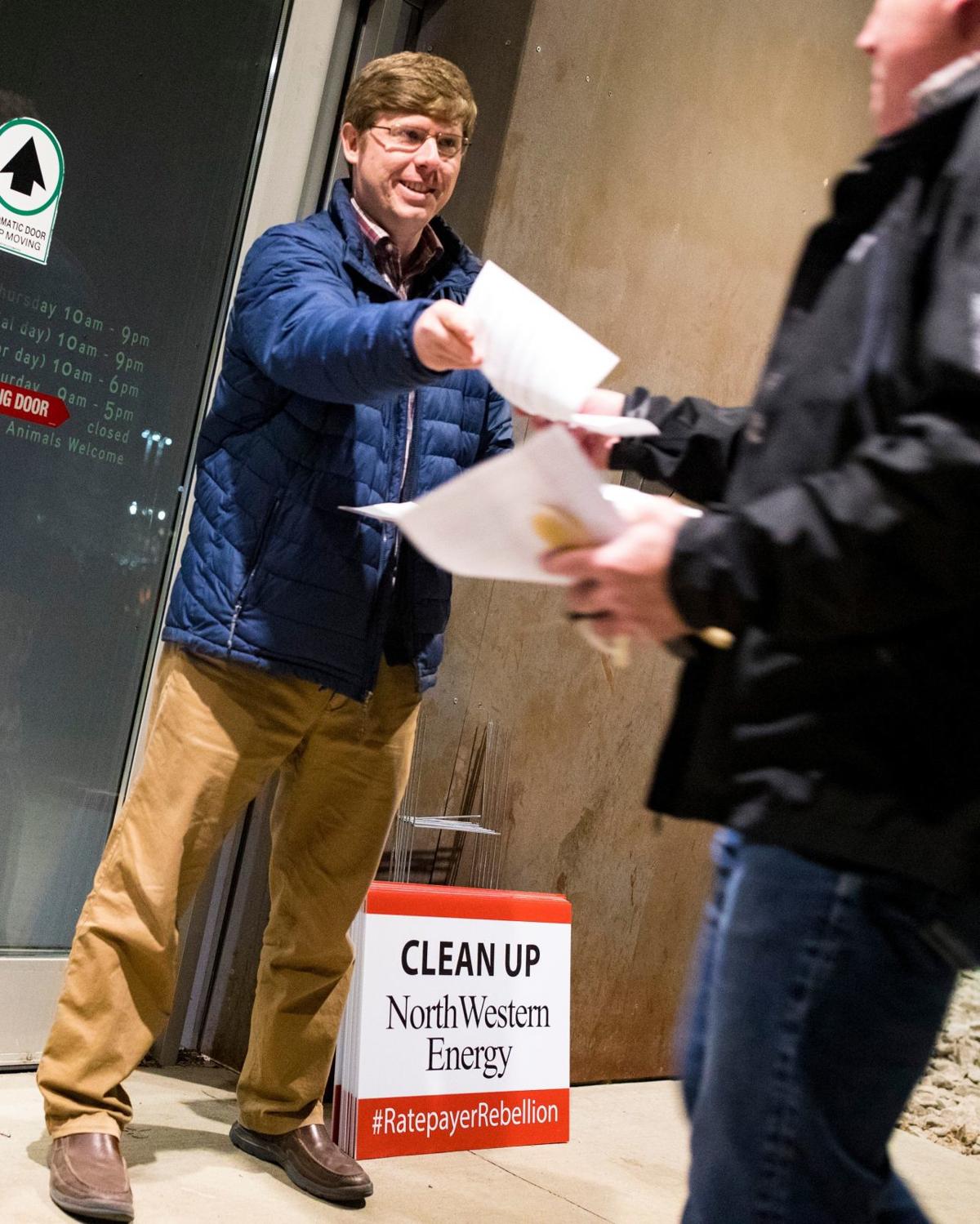 Brian Fadie, the Clean Energy Program Director of the Montana Environmental Information Center hands out flyers outside of the Montana Public Service Commission Listening Session for the Northwestern Energy Resource Plan at the Billings Public Library in Billings on Thursday, Jan. 2, 2020. 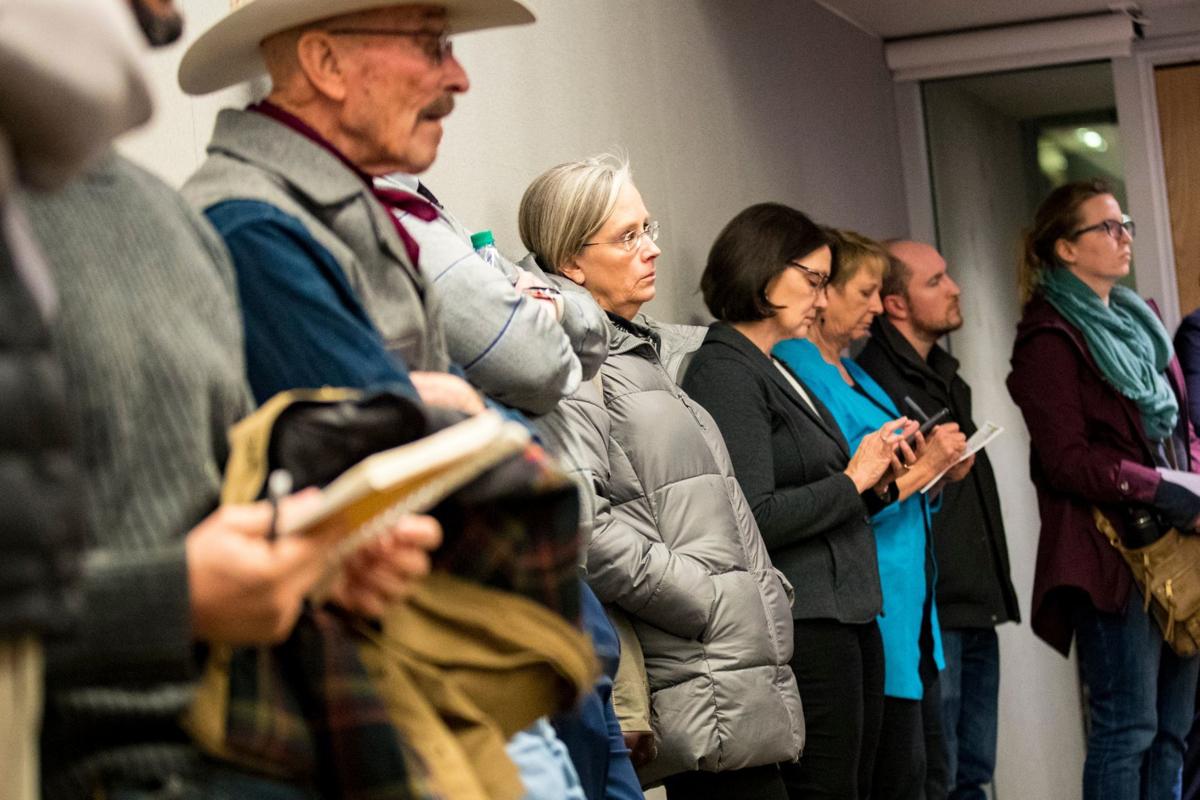 Members of the public stood along the wall after most of the chairs were filled at the Montana Public Service Commission Listening Session for the Northwestern Energy Resource Plan at the Billings Public Library in Billings on Thursday, Jan. 2, 2020. 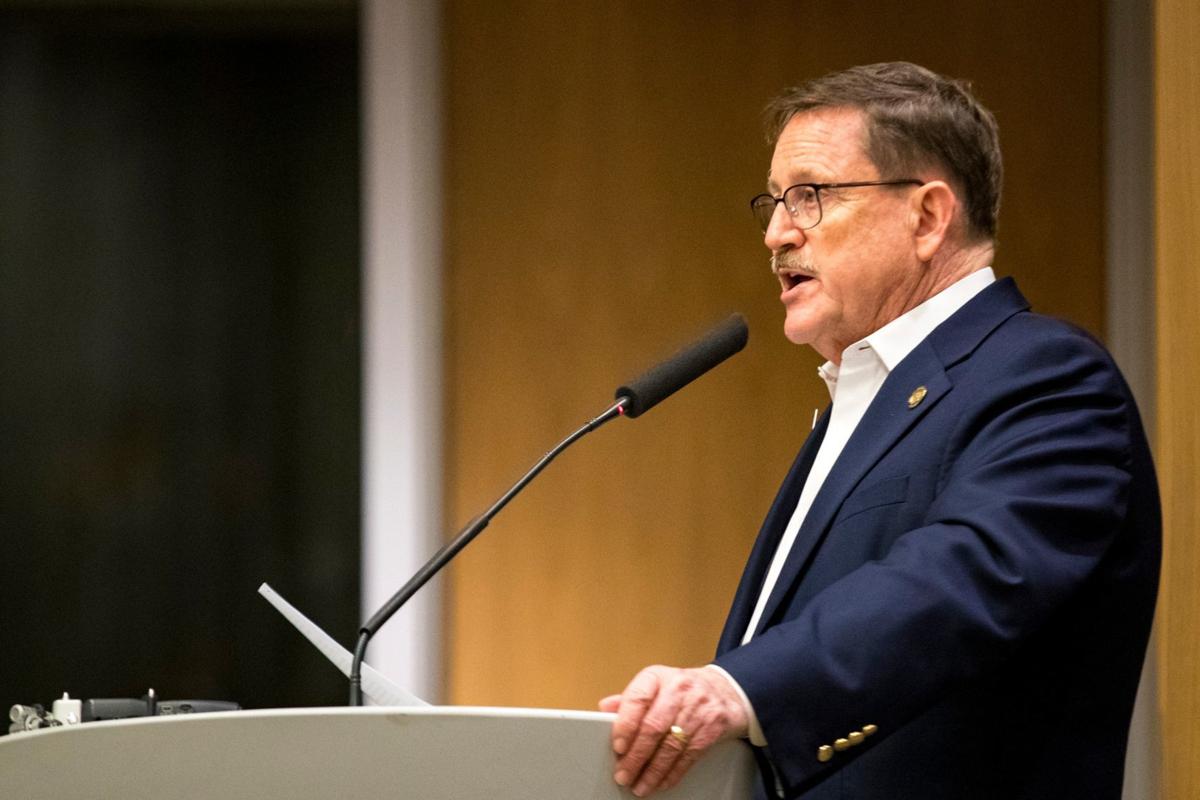 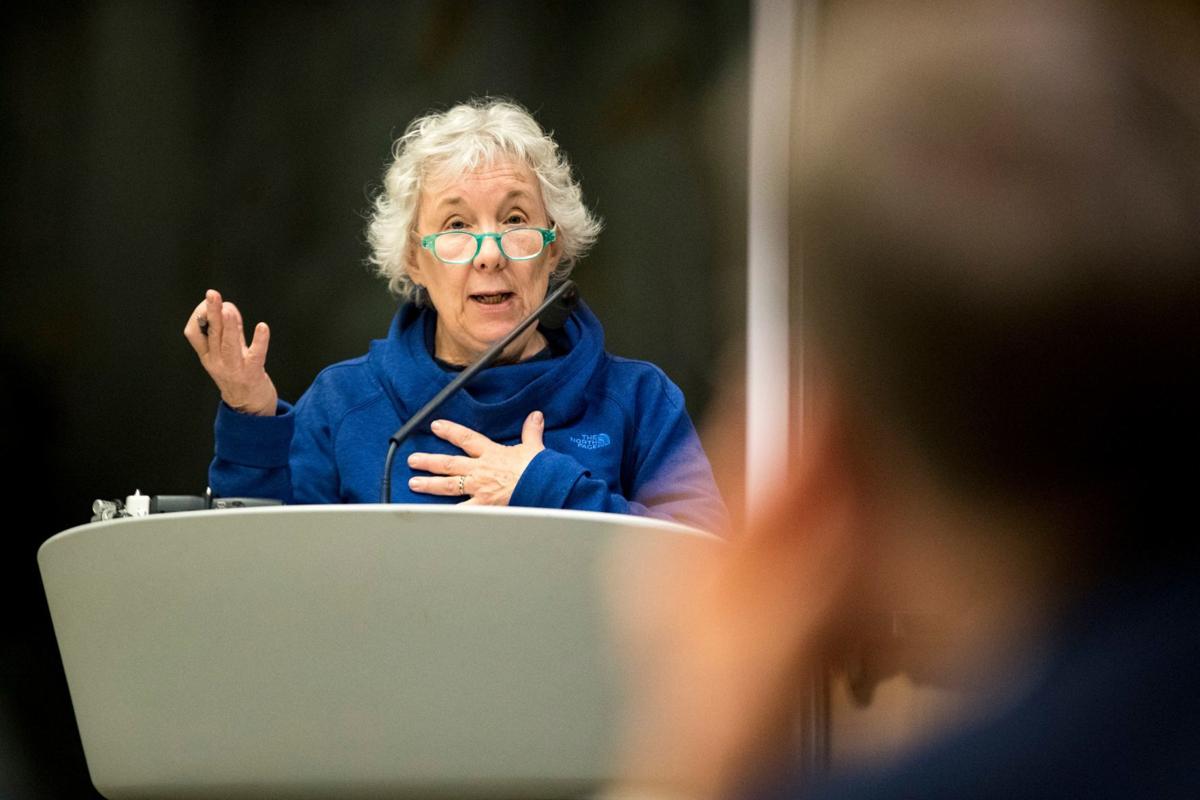 Ed Gulick, a member of the Northern Plains Resource Council, listens during the Montana Public Service Commission Listening Session for the Northwestern Energy Resource Plan at the Billings Public Library in Billings on Thursday, Jan. 2, 2020.

About 120 people attended the Montana Public Service Commission Listening Session for the Northwestern Energy Resource Plan at the Billings Public Library in Billings on Thursday.

Brian Fadie, the Clean Energy Program Director of the Montana Environmental Information Center hands out flyers outside of the Montana Public Service Commission Listening Session for the Northwestern Energy Resource Plan at the Billings Public Library in Billings on Thursday, Jan. 2, 2020.

Members of the public stood along the wall after most of the chairs were filled at the Montana Public Service Commission Listening Session for the Northwestern Energy Resource Plan at the Billings Public Library in Billings on Thursday, Jan. 2, 2020.

In Billings, the biggest city in Montana coal country, people, a few, finally spoke in support of NorthWestern Energy’s fossil-fuel-heavy plan to keep half the state powered up for the next 20 years.

In the final 35 minutes of a two hour hearing about the utility’s 20-year supply plan, witnesses spoke passionately about coal, Colstrip Power Plant and their faith in NorthWestern’s plan to essentially double the generation capacity in its portfolio. The expansion, the utility says, is needed to counter the planned retirements of several coal-fired power plants in the West.

The Billings hearing, conducted by Montana Public Service Commissioner Tony O’Donnell came on the day Colstrip Power Plant’s Unit 1 shut down, with plans announced to close Unit 2 by Saturday as it burned through its stockpile of coal. Colstrip was strongly represented by NorthWestern supporters who cautioned against abandoning coal power for renewable energy, which the majority of the people who spoke said NorthWestern couldn’t do quickly enough.

“In a perfect world, we wouldn’t have to burn coal, we wouldn’t have to burn gas, we wouldn’t have to have wind farms cluttering up the landscape,” said Duane Ankney a Republican legislator from Colstrip. “Those electrons would just come down from the sky and you could scoop them up and you’d have lights all the time. But that’s not the way it is. You need to depend on that electricity for your home for your businesses, for the medical facilities that depend on that electricity to keep people alive. This procurement plant is not going to make anybody rich. It’s going to provide reliable electricity, to provide a reliable resilient grid. And without coal, without a baseload power, they’re not going to have the resiliency in the grid.”

Additional coal power wasn’t actually part of NorthWestern’s 2019 Electricity Supply Resource Procurement Plan. New power plants fired with natural gas were identified as the electricity source of the future. Natural gas produces less greenhouse gas than coal. Gas-fired generators are easier to turn on and off to accommodate renewable energy resources that fluctuate. At the first hearing on this supply plan one month ago, NorthWestern was given 20 minutes to present its plan, during which natural gas was the emphasis.

The day after that first hearing, NorthWestern announced the revival of its plan to increase its share of Colstrip Unit 4 from 30% to 55%. The company said it would buy the additional share for one dollar, a pitch it made last spring to the Montana Legislature, which the lawmakers rejected. After the announcement, Colstrip took a dominant role at the hearings that followed. The plan was panned in Missoula and Bozeman, where more than 250 turned out and no one spoke in favor of NorthWestern’s plan.

But Billings was different. Jill Herald, an agronomist, supported NorthWestern’s plan and warned about the amount of oil used at the base of wind turbine towers and the unfairness of subsidies for renewable energy. She said there were dangers in solar panel manufacturing that don’t get talked about much. And windmills, Herald said, were deadly to airplane pilots.

“I know agricultural pilots that have been affected. On a fact, this was a number of years ago, but the National Aviators Association said that eight agricultural pilots were killed every year by wind turbines. Because how the ag pilots have to fly so low and turn around, but those turbines suck you in. In fact, one of my friends, one of his friends, had an accident. Almost died. Destroyed his plane, scratched the wind turbine, the blade on it, and the company came back and said ‘you owe us $37,000 dollars for our blade.’”

Colstrip Mayor John Williams reminded the roughly 120 people gathered at the Billings Public Library how much good coal has done for Montana. No one talks about the good, Williams said, not the government projects across the state that have been paid for with coal severance taxes. He estimated that the taxes collected from coal since 1975 could probably be counted in the billions.

“There’s no other industry in modern Montana history that has played a significant positive role in our development as a state as has the coal industry,” Williams said. “No other industry. We had discussion tonight about the plan NorthWestern has put together and I have a lot of faith in the plan they have put together. I have faith in their employees. I have faith in their management that is proposing this plan. We have heard comments tonight about the windmills in North Dakota and as (another witness) indicated, those windmills went negative in March. Instead of producers, they became users where would we have been were it not for the availability of coal generated power?”

Williams was referring to a cold spell last March when NorthWestern had to buy power on the market at a high cost to meet demand as energy consumption went up. Part of the utility’s sales pitch for buying more of Colstrip was that wind energy wasn’t available when it was bitter cold and that the costs of market power surged to a thousand dollars a megawatt hour during those cold days.

Leaving the microphone, Williams thanked O’Donnell and said he would see him Saturday for a special hearing in Colstrip, one not publicly noticed. O’Donnell said before the Thursday hearing that the event on Saturday would not count as part of the public comment process for NorthWestern’s energy plan. Only a handful of communities received hearings. Large communities, like Great Falls, didn’t.

But most of the witnesses were concerned about wildfires, drought and extreme weather brought about by climate change. They spoke about the damage of extreme hail storms and the tornado that hit Billings in 2010. They spoke of crop damage wildfire and drought. Several cited the wildfires that have burned through Australia, killing wildlife and people alike.

“I want a world that is livable for our grandchildren. We cannot pretend that climate change is not going to affect us, it’s affecting other people. Just today I read that ecologist from the University of Sydney have estimated that 480 million animals have died in the wildfires of Australia,” said Debra Bonogofsky. “This breaks my heart. This can happen to us and we have to think about this. This is not just business as usual. We have waited too long already and now is the time to stand up to the big corporations who have confused the public for all these years with all their disinformation. And it’s time for elected officials to stand up to the corporations and the lobbyists.”

Bonogofsky said she’s added solar panels to her tire business and saved up to $2,000 a month on energy costs. She said NorthWestern needs to change with the times.

Brian Fadie, of the Montana Environmental Information Center, said NorthWestern’s plan to buy 25% more of Colstrip Unit 4 for a dollar was a dishonest sales pitch that hid the real costs to consumers.

“If it’s only a dollar, NorthWestern would not need to seek preapproval” from the Public Service Commission. “There wouldn’t be a need for it. They could just do it and put it into their operations,” Fadie said. “The reason they’re seeking preapproval is because there is a risk. Everyone knows there are millions in costs that are being hidden right now. We know the boiler at Unit 3, or Unit 4 is going to break and it’s going to have a $20 million fix. We know the cost of coal is going up, who knows by how much. More operations and maintenance costs. The plants are near the end of their designed life. More things are going to be breaking and the cost of cleanup. It’s clear that NorthWestern is hiding costs when it tries to say the purchase price is only a dollar. Of course it’s not only a dollar. If someone tries to sell you a car for one dollar, you know there’s something wrong.”

Charlie Donnes, of Billings, said he opposed NorthWestern’s 20-year plan, but he admires their audacity for trying to pull it off.

“I got to hand Northwestern Energy credit for absolute audacity. To give Northwestern Energy and their wholly owned subsidiary, that would be the Public Service Commission, to give them their dues. I think buying a quarter of Colstrip number four for a dollar is a wonderful idea,” Donnes said. “When it's resold to the ratepayers at $40 million or $400 million, do you realize the bonus potential there? And the golden parachute potential there? I mean this is going to make Millikin just look like a pauper.”