ATLANTA (AP) — John Lewis was celebrated as an American hero during his funeral Thursday as former President Barack Obama and others called on people to follow Lewis' example and fight injustice.

Three former presidents joined in the eulogies at Atlanta's Ebenezer Baptist Church after nearly a week of mourning that took the civil rights icon from his birthplace in Alabama to the nation’s capital of Washington to his final resting place in his home of Atlanta.

Lewis was “a man of pure joy and unbreakable perseverance," Obama said during a fiery speech in which he hearkened back to Lewis' legacy and connected it to the ongoing fight against those who are “doing their darndest to discourage people from voting.”

“He as much as anyone in our history brought this country a little bit closer to our highest ideals," Obama said. “And some day when we do finish that long journey towards freedom, when we do form a more perfect union, whether it's years from now or decades or even if it takes another two centuries, John Lewis will be a founding father of that fuller, fairer, better America.”

Obama, speaking from the pulpit of the church that Martin Luther King Jr. once led, called on Congress to renew the Voting Rights Act, which the Supreme Court diminished in 2012.

“You want to honor John, let’s honor him by revitalizing the law that he was willing to die for,” Obama said.

Obama endorsed ending the Senate filibuster if that is what’s needed to pass an overhauled voting law. The first Black president called the procedural hurdle that effectively requires 60 votes to pass major legislation a “Jim Crow relic,” referring to the segregation era.

Former President George W. Bush said Lewis preached the Gospel and lived its ideals, “insisting that hate and fear had to be answered with love and hope." Lewis died July 17 at the age of 80.

Speaker of the House Nancy Pelosi recalled how Lewis' body was lying in state at the U.S. Capitol earlier this week, and a double rainbow appeared.

“There was this double rainbow over the casket," she said. “He was telling us, ‘I'm home in heaven, I'm home in heaven.' We always knew he worked on the side of angels, and now he is with them.”

The arc of Lewis’ legacy of activism was once again tied to Ebenezer’s former pastor King, whose sermons Lewis discovered while scanning the radio dial as a 15-year-old boy growing up in then-segregated Alabama.

King continued to inspire Lewis’ civil rights work for the next 65 years as he fought segregation during sometimes bloody marches, Greyhound bus “Freedom Rides” across the South and later during his long tenure in the U.S. Congress.

“Get in good trouble, necessary trouble, and help redeem the soul of America,” Lewis said of his run-ins with the law. The phrase was repeated several times during the funeral.

“We will continue to get into good trouble as long as you grant us the breath to do so,” one of King’s daughters, the Rev. Bernice King, said as she led the congregation in prayer.

“Here lies a true American patriot who risked his life for the hope and promise of democracy,” Ebenezer’s senior pastor, the Rev. Raphael Warnock, told the congregation.

Outside Ebenezer, hundreds gathered to watch the service on a large screen outside the church. Some sang the gospel song “We Shall Overcome.”

When Lewis was 15, he heard King's sermons on WRMA, a radio station in Montgomery, Alabama, he recalled in an interview for the Southern Oral History Program.

King was “the person who, more than any other, continued to influence my life, who made me who I was," Lewis wrote in his 1998 autobiography, “Walking with the Wind."

By the summer of 1963, Lewis was addressing thousands of people during the March on Washington, where King gave his “I Have a Dream" speech. He spoke then about Black people beaten by police and jailed — themes that resonate vividly in today's times.

“My friends, let us not forget that we are involved in a serious social revolution," Lewis told the huge crowd on the Washington Mall.

“To those who have said, ‘Be patient and wait,' we have long said that we cannot be patient," he added. “We do not want our freedom gradually, but we want to be free now! We are tired. We are tired of being beaten by policemen. We are tired of seeing our people locked up in jail over and over again."

In 1965, Lewis was beaten by Alabama state troopers in the city of Selma in what became known as “Bloody Sunday."

Last Sunday, his casket was carried across the Edmund Pettus Bridge in Selma. The wagon rolled over a carpet of rose petals on the bridge that spans the Alabama River. On the south side of the bridge, where Lewis was attacked by the law officers, family members placed red roses that the carriage rolled over, marking the spot where Lewis spilled his blood and suffered a head injury.

Lewis was later awarded the Medal of Freedom by the nation’s first Black president in 2011.

He spent more than three decades in Congress, and his district included most of Atlanta.

Shortly before he died, Lewis wrote an essay for The New York Times and asked that it be published on the day of his funeral. In the piece published Thursday, Lewis recalled the teachings of King:

“He said we are all complicit when we tolerate injustice," Lewis wrote. “He said it is not enough to say it will get better by and by. He said each of us has a moral obligation to stand up, speak up and speak out."

“Though I may not be here with you, I urge you to answer the highest calling of your heart and stand up for what you truly believe," Lewis added. “In my life I have done all I can to demonstrate that the way of peace, the way of love and nonviolence is the more excellent way. Now it is your turn to let freedom ring."

Former President Bill Clinton referenced the essay during his remarks Thursday: “It is so fitting on the day of his service, he leaves us his marching orders: Keep moving.”

Briefing: Can you get coronavirus twice? Your COVID-19 questions answered

Each day The Associated Press answers reader questions about the coronavirus. How long does the virus live on surfaces? Find out here, along with answers to more questions on our minds lately.

Virus in brief: Tests exposed as imperfect, and more to know today about COVID-19

Plus: 100 air passengers get banned for no masks, while it's Harleys everywhere and masks nowhere at the annual Stugis biker rally. Also: Get back-to-school safety tips in this time of COVID-19.

Virus briefing: US tops 5 million cases, with no end in sight

Five states account for 40% of cases. Get a full report and see five charts that show the spread in our state and nation.

The emergencies chief for the World Health Organization said that COVID-19 doesn’t seem to follow the seasonal patterns that some viruses exhibit, making it harder to control.

A Florida sheriff told his employees they will not wear masks at work, and visitors to his office can't wear masks either under his new order.

With a vaccine months off, companies are rushing to test what may be the next best thing: drugs that deliver antibodies to fight the virus right away, without having to train the immune system to make them.

Harris, a 55-year-old first-term senator, will be the first Black woman to compete on a major party's presidential ticket.

Russia on Tuesday became the first country to clear a coronavirus vaccine and declare it ready for use, despite international skepticism. President Vladimir Putin said that one of his daughters has already been inoculated. 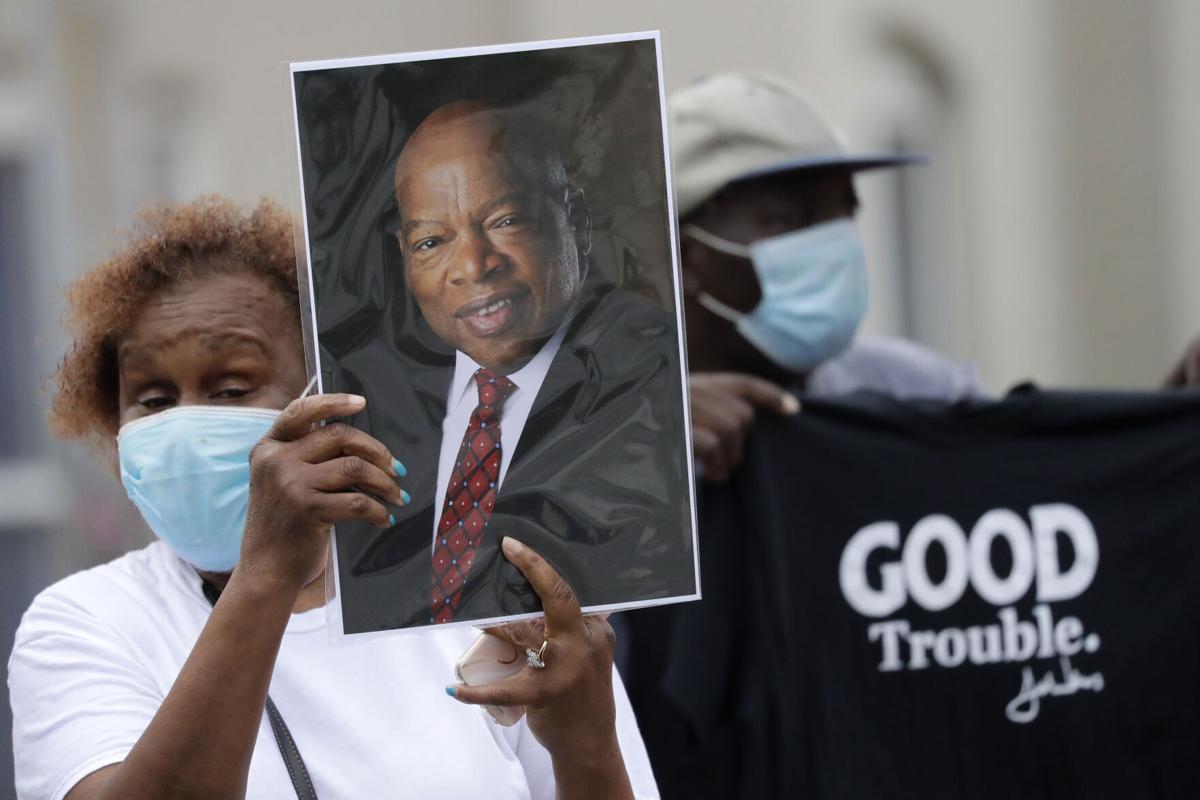 Mourners stand outside Ebenezer Baptist Church during the funeral for Rep. John Lewis at , Thursday, July 30, 2020, in Atlanta. Lewis, who carried the struggle against racial discrimination from Southern battlegrounds of the 1960s to the halls of Congress, died Friday, July 17, 2020. (AP Photo/Brynn Anderson) 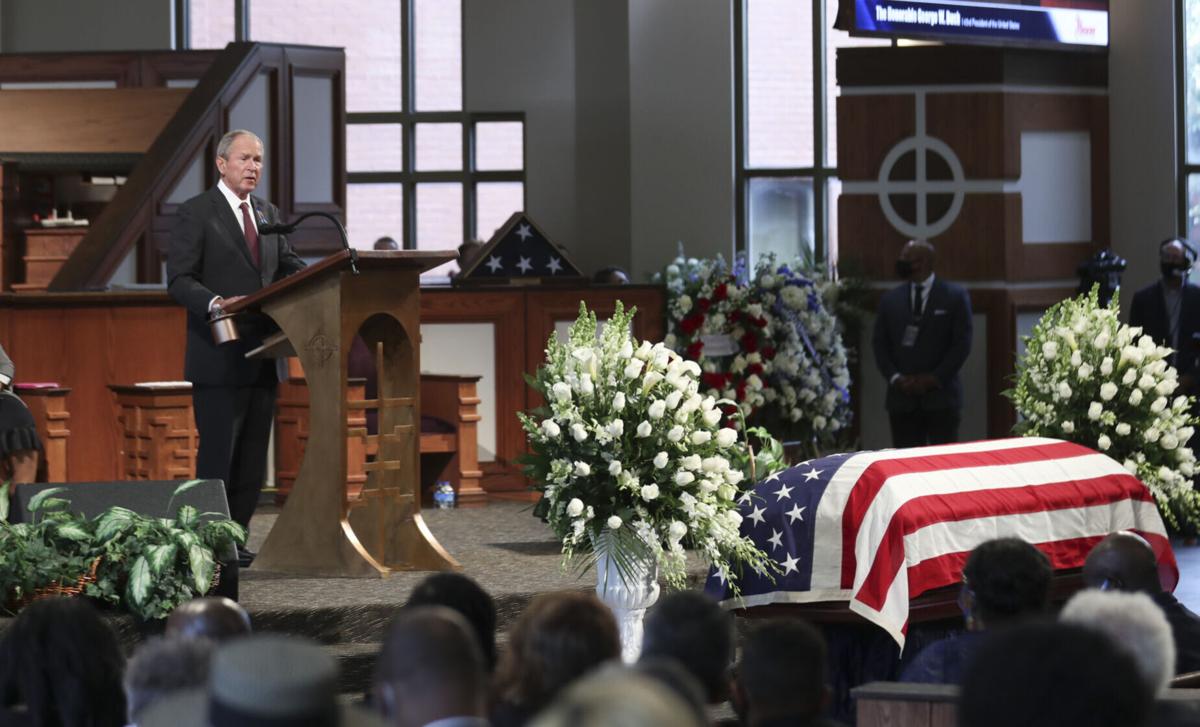 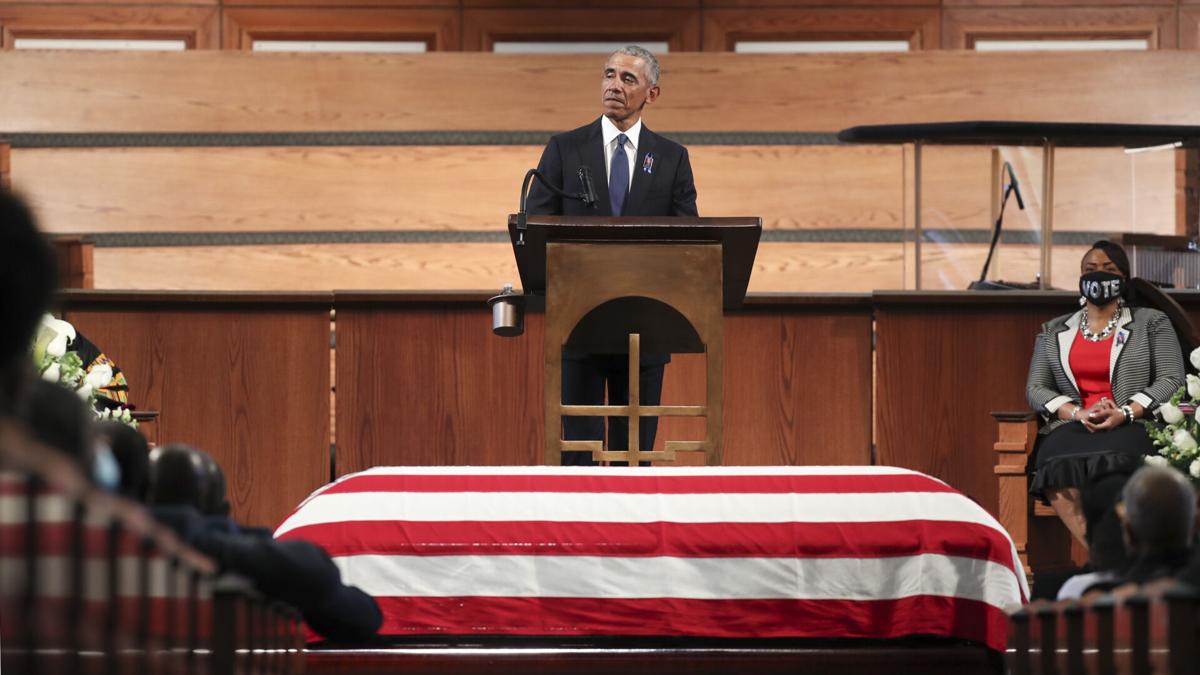