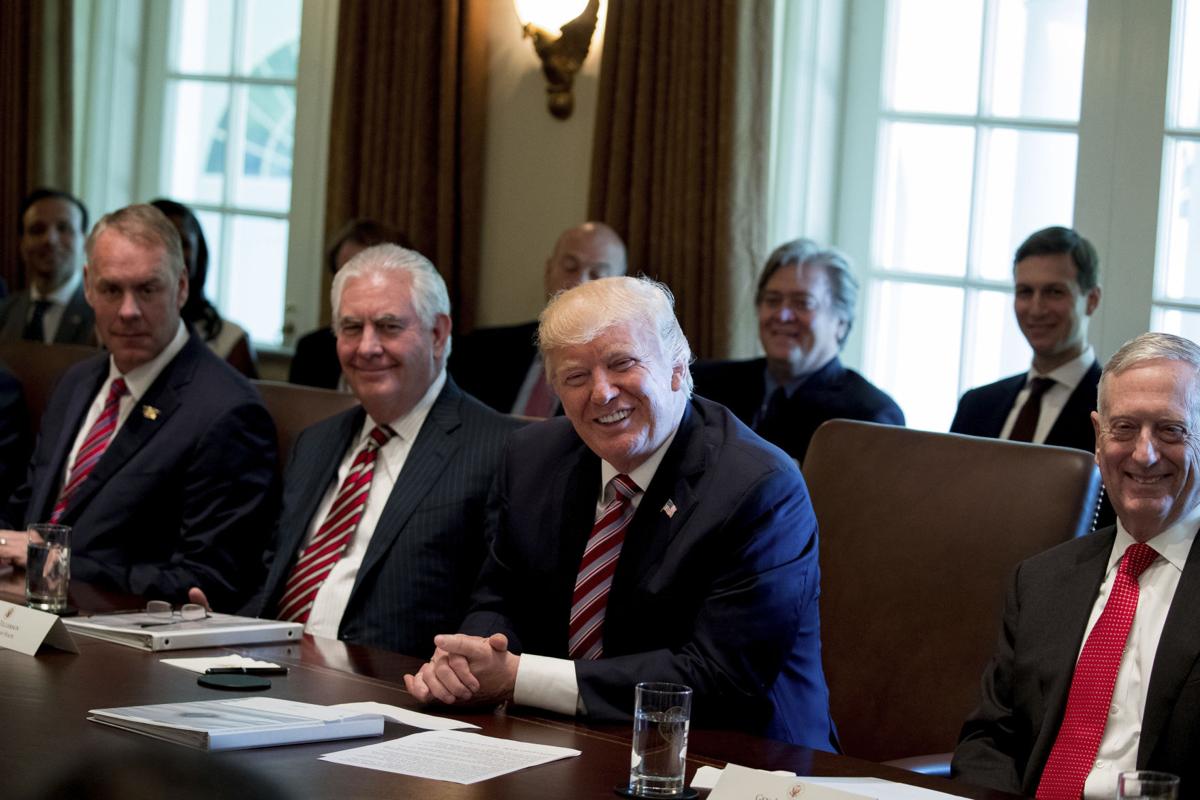 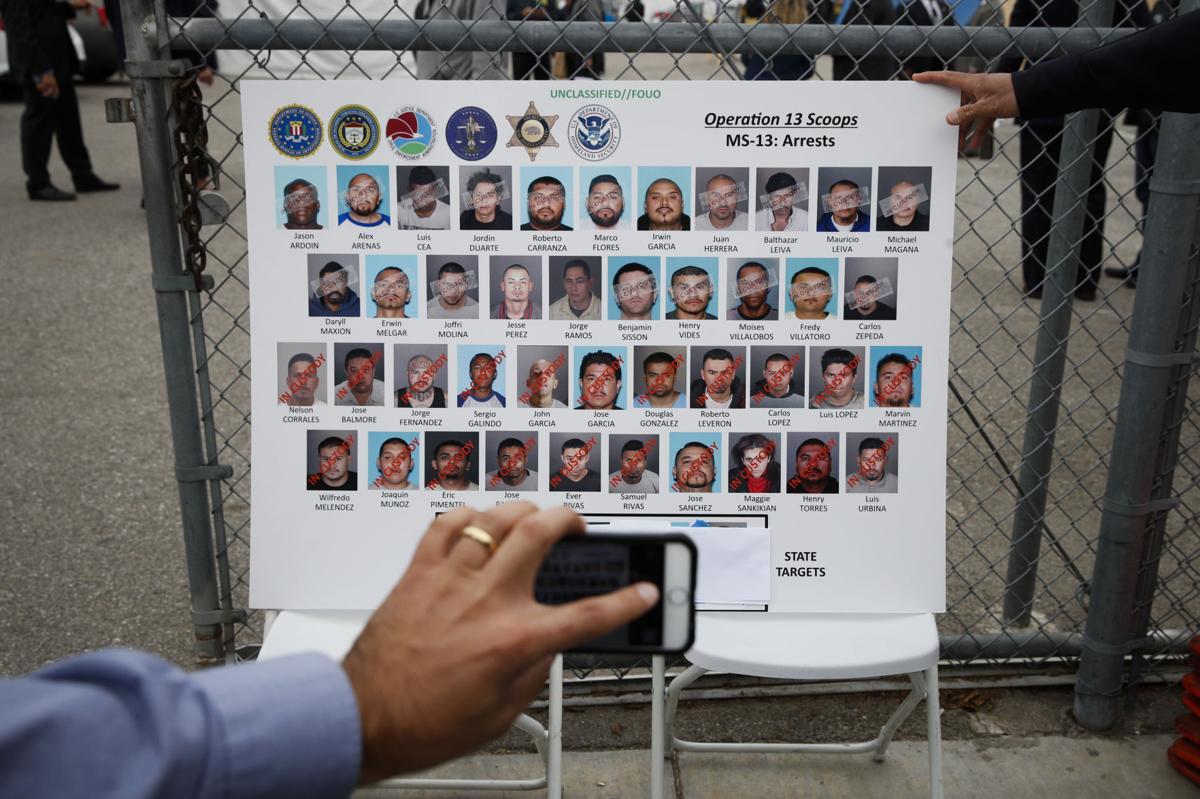 A reporter uses his smartphone to photograph a board showing images of MS-13 gang members during a news conference Wednesday, May 17, 2017, in Los Angeles. Hundreds of federal and local law enforcement fanned out across Los Angeles, serving arrest and search warrants as part of a three-year investigation into the violent and brutal street gang MS-13. (AP Photo/Jae C. Hong) 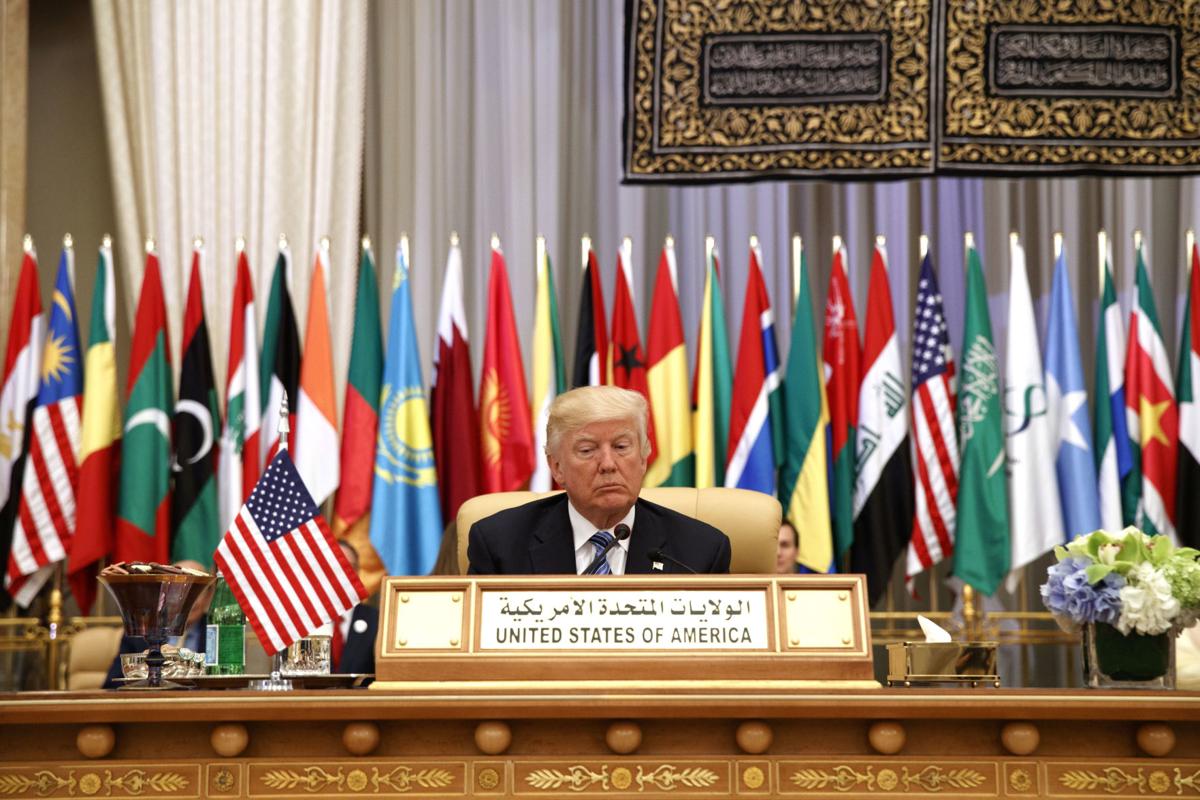 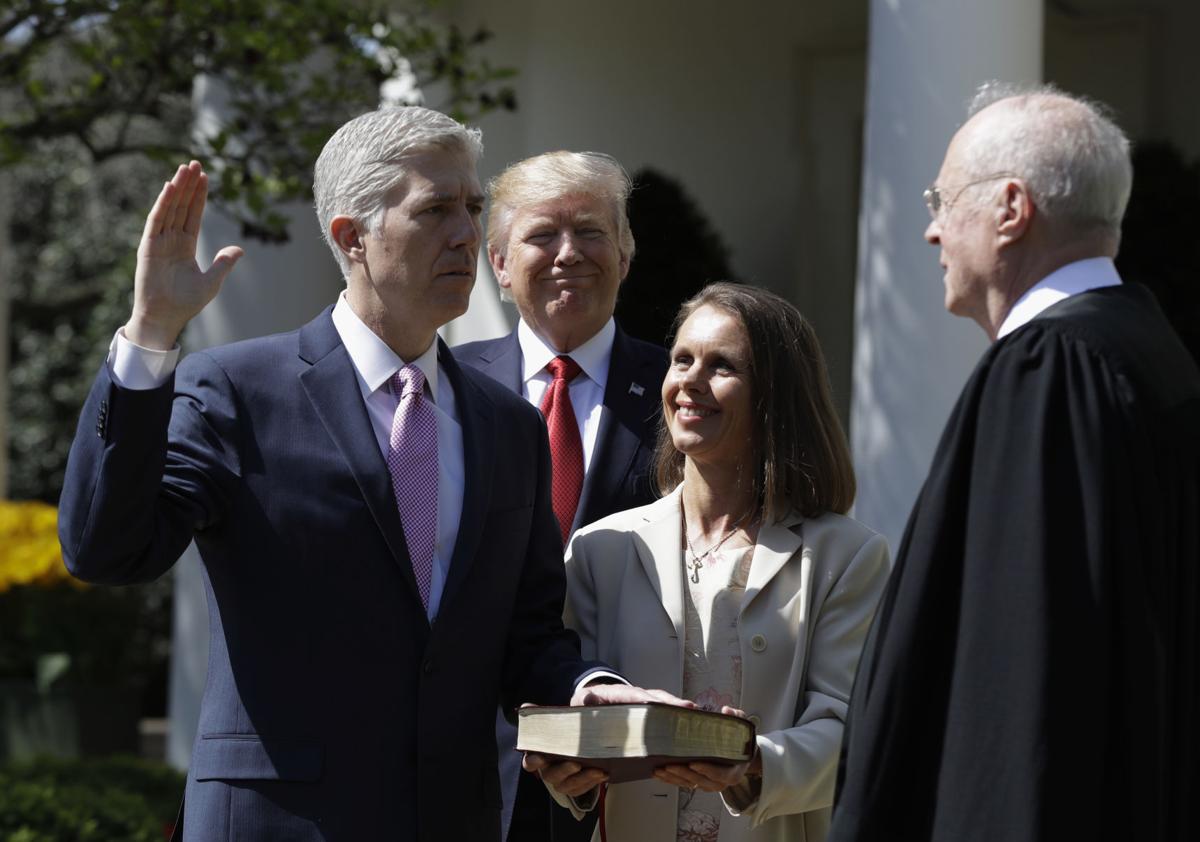 WASHINGTON (AP) — President Donald Trump showed off a few too many trophies in his display Cabinet.

Trump opened part of a Cabinet meeting to the press Monday and filled that time with self-congratulation as well as praise from his team. On multiple fronts, that celebration of achievement was unearned.

A sampling of his comments:

"Great success, including MS-13. They're being thrown out in record numbers and rapidly. And they're being depleted. They'll all be gone pretty soon."

THE FACTS: There's no publicly available information to back up Trump's claim that this violent gang is about to disappear.

Deportations are actually down slightly compared with the same time last year, as arrests of people caught crossing the Mexican border have dropped to historic lows. More than 100 MS-13 gang members have been arrested in recent weeks, though the government hasn't said how many of those people have been deported.

In any event, deportations alone cannot eradicate MS-13, a homegrown gang with ties to El Salvador that includes U.S. citizens. The government has not said how many of the estimated 7,000 to 10,000 gang members are Americans, who cannot be "thrown out." The group's roots in the U.S. go back more than 20 years to Los Angeles.

The gang was in decline in Southern California long before Trump was elected. During a recent raid of MS-13 members in Los Angeles, Police Chief Charlie Beck said the gang's membership has been declining for several years in part because of law enforcement crackdowns.

MS-13 has been in the crosshairs of federal law enforcement since at least 2012 when the group was designated a transnational criminal organization and subjected to financial sanctions by the Treasury Department. Three leaders of the gang were targeted for sanctions in 2015.

"I recently returned from a trip overseas that included deals for more than $350 billion worth of military and economic investment in the United States. These deals will bring many thousands of jobs to our country and, in fact, will bring millions of jobs ultimately and help Saudi Arabia take a greater role in providing stability and security in that region."

THE FACTS: Trump's $350 billion figure includes hundreds of billions of dollars in aspirational deals with Saudi Arabia that have not been signed yet and could be revised or eliminated. He's relying on a 20- to 30-year projection of what the government believes will be the contracts' long-term value because of the cost of sustaining them. When he visited Riyadh, agreements on more than $110 billion in foreign military sales were pledged, according to the State Department. But many of those — along with a significant amount of the $80 billion in announced commercial civilian sales — were memoranda of understanding or letters of intent and not sales contracts.

Arms sales make up the vast majority of Trump's total, but those must be approved by the State Department and Congress.

Since Trump's trip, the State Department has notified lawmakers of only a small fraction of the total — $1.7 billion, mainly in naval and air force training contracts, and some Democrats say they want to hold those up over human rights concerns and Saudi Arabia's conduct in the war against rebels in Yemen. And while U.S. officials say further approvals, including large-ticket items such as a high-altitude missile defense system, could be approved in the coming weeks, there is no guarantee Congress will go along.

In addition, some of the business he's claiming to have generated was agreed to during the Obama administration.

"I will say that never has there been a president — with few exceptions; in the case of FDR, he had a major Depression to handle — who's passed more legislation, who's done more things than what we've done, between the executive orders and the job-killing regulations that have been terminated. Many bills; I guess over 34 bills that Congress signed. A Supreme Court justice who's going to be a great one ... We've achieved tremendous success."

THE FACTS: He has little to show for his first five months in office, in concrete ways, other than the confirmation of a justice.

Trump's two immediate predecessors, Barack Obama and George W. Bush, accomplished more in their early months. Trump has achieved no major legislation. The bills he is counting up are little more than housekeeping measures — things like naming a courthouse and a VA health care center, appointing board of regents members, reauthorizing previous legislation. He has indeed been vigorous in signing executive orders, but in the main they have far less consequence than legislation requiring congressional passage.

Trump's big agenda items, like his promised tax overhaul, have yet to pass or even reach Congress. His attempt to secure the borders from people from terrorism-prone regions is so far blocked by courts.

By contrast,  Obama signed a $787 billion stimulus package into law in his first month, while also achieving a law expanding health care for children and the Lilly Ledbetter bill on equal pay for women in that time.

Bush got off to a slower start, in part because he did not take office in a deep recession requiring quick action, as Obama had done. But by this point in his presidency, Bush had signed a huge tax cut into law.