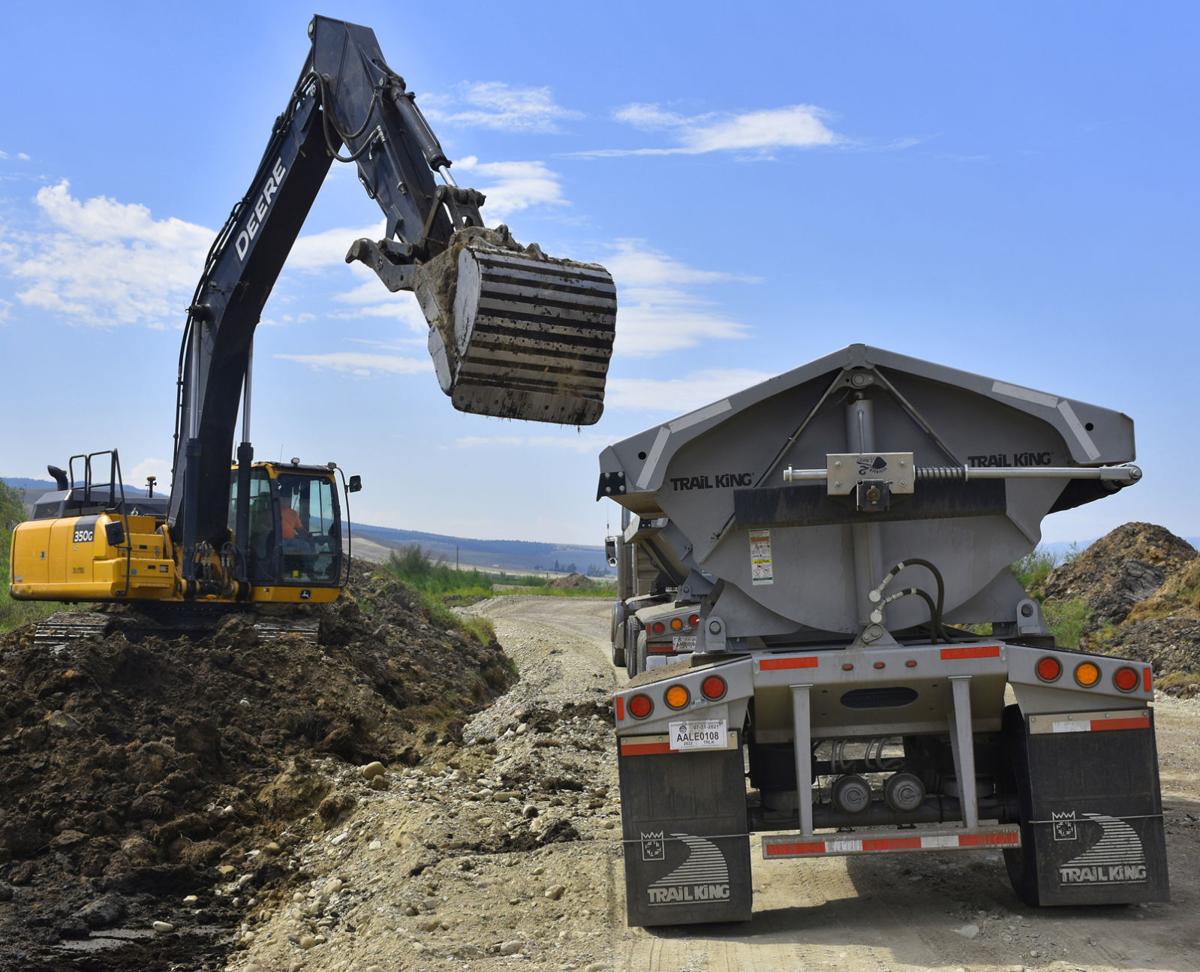 An excavator loads a side dump trailer with contaminated soils this summer as work continued on the Superfund cleanup along the Clark Fork River. 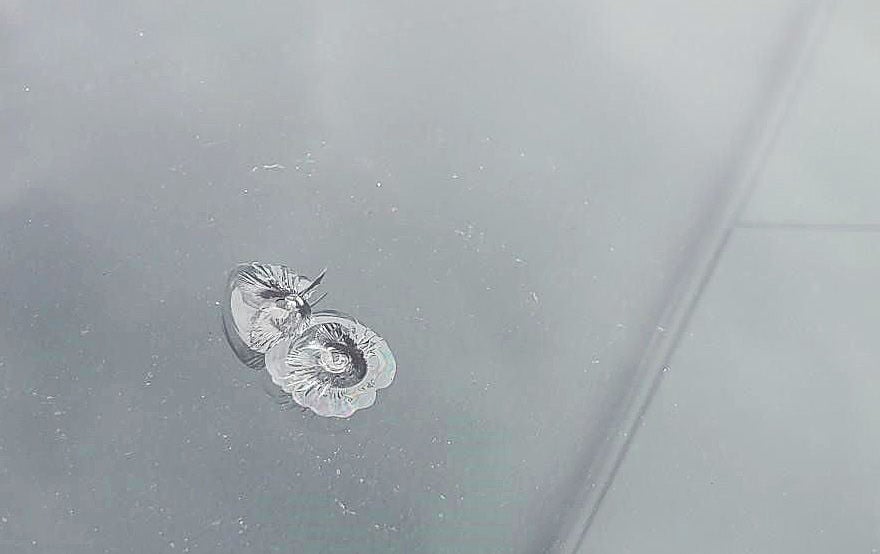 The windshield of Ryan Blaz's F-150 pickup was damaged by rock that he believes came from a truck and side dump trailer operated by a driver for Missouri River Contractors on Highway 48 in June.

The shared predicament in this case was windshield damage.

With one exception, the pits and cracks happened while motorists were traveling Montana 48 while in proximity to side dump trailers hauled by drivers for Missouri River Contractors.

Many motorists blamed the trucks and their loads for the windshield damage. Some of them now avoid Montana 48 altogether during their daily commutes, traveling instead through Opportunity or taking the Galen Road.

Nick Miller, vice president for Missouri River Contractors, acknowledged that the trucks’ tires might be spitting rocks but said they surely originate from a chip and seal pavement operation this summer and not from loads toted by the dump trucks.

“It’s coming off the road and that’s called a road hazard,” Miller said.

He said the side dump trailers are new, equipped with new tires with deep tread that tend to pick up stones more than older tires.

The trucks stream all day, hauling contaminated material from the floodplain and banks of the Clark Fork River to an approved repository in the Opportunity Ponds.  They travel a portion of the Frontage Road and a portion of Montana 48 and then turn around and do it again.

When full, the loads are covered by tarps. Miller insisted the empty trailers are just that — empty. If any material lingers, it’s in the bottom of the dump beds, he said.

Ian Lux works at the Montana State Hospital and regularly travels Montana 48. His windshield woes have been memorable.

He first suffered damage on Oct. 13 to the windshield of his Toyota Tacoma. The day after fetching it back from a Butte windshield repair shop, it happened again. The third time occurred when he was driving his wife’s car because the Tacoma was back in the shop.

Lux was driving home to Anaconda the first time his pickup’s windshield was damaged as he drove behind a Missouri River Contractors truck.

He said he talked later to a company official who blamed the damage on the previous chip and seal treatment.

“He was real condescending about it,” Lux said.

Miller said he thinks windshield damage that has occurred this fall could possibly be tied to snowplow blades kicking up rocks from the chip and seal treatment that then were loose on the pavement surface.

Yet Lori Ryan, a spokeswoman for the Montana Department of Transportation, said Tuesday that snow plows have not been active yet this fall on Highway 48.

She said the chip seal was completed July 28.

A Montana Department of Transportation manual about chip seals, used for preventive maintenance, acknowledged the treatment isn’t immune from problems.

“If a chip seal is not properly designed and constructed, several potential problems can occur. Windshield damage is a common problem that occurs when the chips are not adequately embedded in the asphalt and/or excess chips are used,” according to MDOT.

Typically, a chip seal involves at least a three-step process. First, an asphalt emulsion is applied, followed by layer of rock to an existing asphalt pavement surface. The “chip” refers to small pieces of crushed rock placed on the surface. Finally, the rock is embedded into the asphalt emulsion.

Ryan said that if the chip seal work on Highway 48 had been flawed the problems would have been detected at the time by the project manager on site and an MDOT inspector.

Ryan Blaz said the family’s 2018 Ford F-150 Lariat was damaged in June, a month before the chip seal.

He said he drove it one day to work in Deer Lodge and on the way home his truck was “hit by an entire sheet of rocks.”

Blaz said it happened when he was close to a Missouri River Contractors truck and side dump trailer. He said he would have pursued the truck to request compensation for the damage but was pressed to pick up his children from daycare.

He said the electrical contracting firm in Anaconda that employs him has suffered windshield damage to two vehicles. That company continues to work a big job in Deer Lodge, he said.

His employer confirmed the damage described by Blaz.

The Missouri River Contractors trucks hauling contaminated soils from the Superfund cleanup could be driving Montana 48 for quite some time. The Montana Department of Environmental Quality has oversight for the project. River cleanup will continues for many years.

“The remediation work on the Clark Fork necessitates the excavation and removal of considerable amounts of contaminated material that must be moved offsite to the repository at Opportunity for protective disposal,” Stone said. “On projects like this, both big and small, DEQ has contract requirements and ensures that our contractors follow best practices for hauling material such as tarping loads and obeying traffic laws.”

Montana law states that “a load must be secured to prevent blowing, spilling or falling cargo.”

Miller said Missouri River employs a spotter who, from a vantage point on the Frontage Road, observes the company’s trucks emerging from Perkins Lane. He said the spotter alerts the driver if the load isn’t covered. He said that rarely happens.

Meanwhile, Eric Marcille of Anaconda had a positive experience with Missouri River after material from one of its trucks spidered the windshield of his GMC Sierra pickup.

That incident occurred on the Frontage Road and involved a different project, not the Clark Fork cleanup. Marcille said he followed the truck to the job site near the former Uncle Buck’s bar and the company agreed to accept responsibility for the damage.

“They were really good to me,” Marcille said.

Miller said it is telling that nearly every report of damage has involved Montana 48, a reality he said confirms his theory that the chip seal treatment is the root cause of the pits and cracks and worse.

“I’m not trying to shy away from our responsibility,” he said, noting that he believes Missouri River is not directly to blame. “We’re trying to do things the right way.”

Blaz said Miller promised to call him back but hasn’t. He said he doubts very much that the damage done to numerous windshields of motorists on Highway 48 is from the chip seal treatment in late July.

Coast Guard rescues kayaker off the coast of Louisiana

Coast Guard rescues kayaker off the coast of Louisiana

An excavator loads a side dump trailer with contaminated soils this summer as work continued on the Superfund cleanup along the Clark Fork River.

The windshield of Ryan Blaz's F-150 pickup was damaged by rock that he believes came from a truck and side dump trailer operated by a driver for Missouri River Contractors on Highway 48 in June.