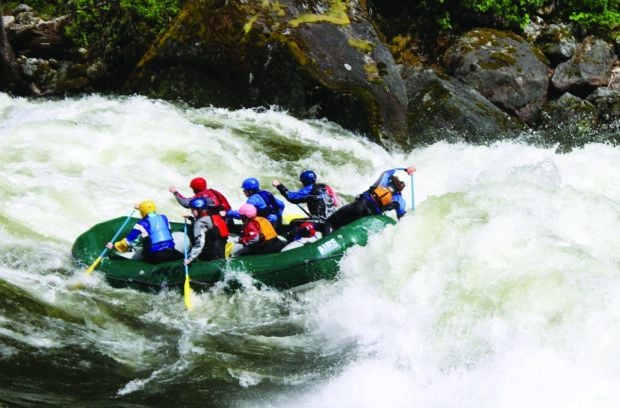 A group of rafters went through Lochsa Falls backward recently, but avoided flipping. The Lochsa River drops nearly 2,000 vertical feet over 70 miles from its headwaters near the Powell Ranger Station southwest of Lolo Pass. 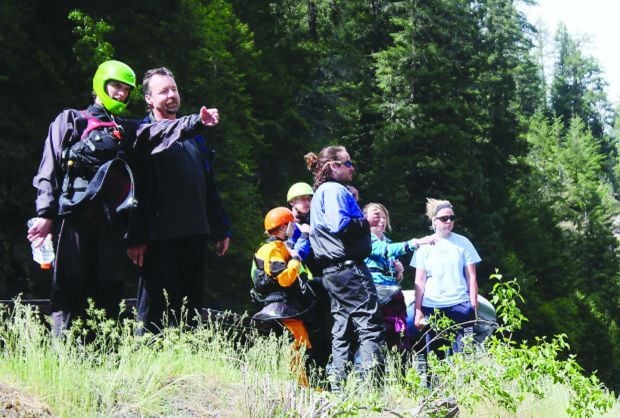 A group of kayakers scouts a rapid from U.S. Highway 12 in this May photo. The Lochsa River’s whitewater section is extremely accessible because it runs parallel to the road, making it easy to scout rapids before getting into the water. 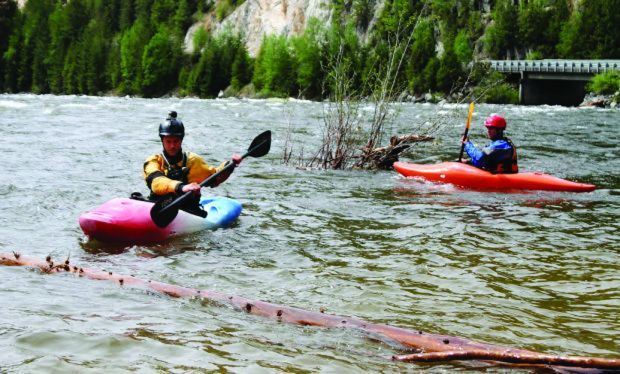 A pair of kayakers from Canada stretches before heading down the Lochsa. The two got out of the river only a few miles downstream after seeing how big the water was.

By David Erickson of The Ravalli Republic

POWELL RANGER STATION, Idaho — Every spring, as if drawn by a giant magnet, chinook salmon return to the Lochsa River in Idaho on their annual migration from the Pacific Ocean to spawn in the creeks and streams that drain into the river. The water is crystal-clear and cold, and comes largely from snow melting or rain falling in the Bitterroot Mountains.

A migration of another species takes place at about the same time, as adrenaline-starved whitewater junkies from all over the world converge on the Lochsa for the annual spring runoff.

Famous for its class III, IV and V rapids, the Lochsa drops nearly 2,000 vertical feet over the course of 70 pristine, forested miles from its headwaters near the Powell Ranger Station southwest of Lolo Pass to where it flows into the Selway River in Lowell, Idaho.

Just as the waters attract salmon, trout and harlequin ducks in great numbers, the river acts as a giant

magnet every spring for an odd assortment of semi-nomadic kayakers, rafters, riverboarders, drifters,

photographers and other adventurers who show up just as the water levels reach their climax.

A brief but violent rainstorm one recent night caused a surge in the Lochsa’s flow, which topped out at over 20,000 cubic feet per second the following morning.

The Gates of the Wilderness Campground (located at mile marker 112 on Highway 2) was full of boaters from all over the country who looked haggard from the previous night’s partying, but couldn’t wait to get their paddles in the water for another epic run.

By 11 a.m., a parking turnout down the road a few miles was full of cars with various boats strapped to trailers and a small crowd of wide-eyed and nervous boaters who swapped advice and stories as they pulled on their wetsuits and helmets for another day of battle.

Two Canadian kayakers got in the river first, but changed their minds only a few miles downstream and got out after seeing how powerful the water was at eye-level. The potential for disaster on the Lochsa is very real. In 2011, a kayaker and a rafter drowned within a month of each other during the spring runoff. The second fatality occurred when the river was running at about 15,000 cfs.

Many of the characters who meet at the Lochsa every spring have never met before, but an instant camaraderie is formed as the boaters bond over the knowledge that the next two hours will be one of the most thrilling, if not terrifying, river journeys of their lives. Some of them drift from river to river in the spring, depending on where the high water is.

This particular week, the Lochsa is the ultimate kayaking destination in the Pacific Northwest.

Even for experienced boaters like Skip Volpert, a guide with Idaho River Journeys, the violence of the river at 20,000 cfs is hard to fathom.

Doug Green, a builder and a kayaker from Bozeman, has been coming back to the river almost every spring for the past 15 years. He and friend Adam Ashmore have camped out for two weeks, kayaking the river every day.

“This river is the gem of the whole Northwest,” Green said. “And the water is huge right now. It’s incredible.”

“My boat actually left the water at the top of one those standing waves,” Ashmore said. “I could feel the back end of my boat go airborne. The topography of the water in this river is really amazing.”

Then there’s a man who goes by the name “Crazy Carl,” who is well-known in the Lochsa boating community. He paddles the same 12-mile stretch alone three or four times a day in his inflatable kayak, each time hitchiking back up, his hair still wet from the run, to do it again.

“That wave stood me up pretty good,” Crazy Carl said as he gazed at Lochsa Falls from a roadside turnout, a class IV-plus rapid that is infamous for flipping rafts.

As he spoke, a kayaker from Washington took a bad line, veering far right of the preferred route through the vicious, frothing rapid, known as “Satan’s Line.” The kayaker flipped halfway through, the bottom of her boat teetering at the top of the rapid for a few seconds, before she bailed and swam to shore with one hand on her overturned boat.

“It tried to do that to me, too,” said Crazy Carl, just before he hopped into a friend’s truck to go do another “lap.” “You can’t get a feel for how big it is standing 10 feet above the river here, but once you get down to water level it’s a whole other story.”

It’s better to be safe than sorry, which is why Butte-Silver Bow Sheriff Ed Lester requested help late Tuesday night from the Helena bomb squa…

A group of rafters went through Lochsa Falls backward recently, but avoided flipping. The Lochsa River drops nearly 2,000 vertical feet over 70 miles from its headwaters near the Powell Ranger Station southwest of Lolo Pass.

A group of kayakers scouts a rapid from U.S. Highway 12 in this May photo. The Lochsa River’s whitewater section is extremely accessible because it runs parallel to the road, making it easy to scout rapids before getting into the water.

A pair of kayakers from Canada stretches before heading down the Lochsa. The two got out of the river only a few miles downstream after seeing how big the water was.