Debee Wachtel stands by a plaque she and her husband placed at the airplane crash site on the East Ridge on Wednesday. Wachtel was 9 months old at the time of the 1950 crash, which killed her parents. Her brother, Dean Silber, was 2. 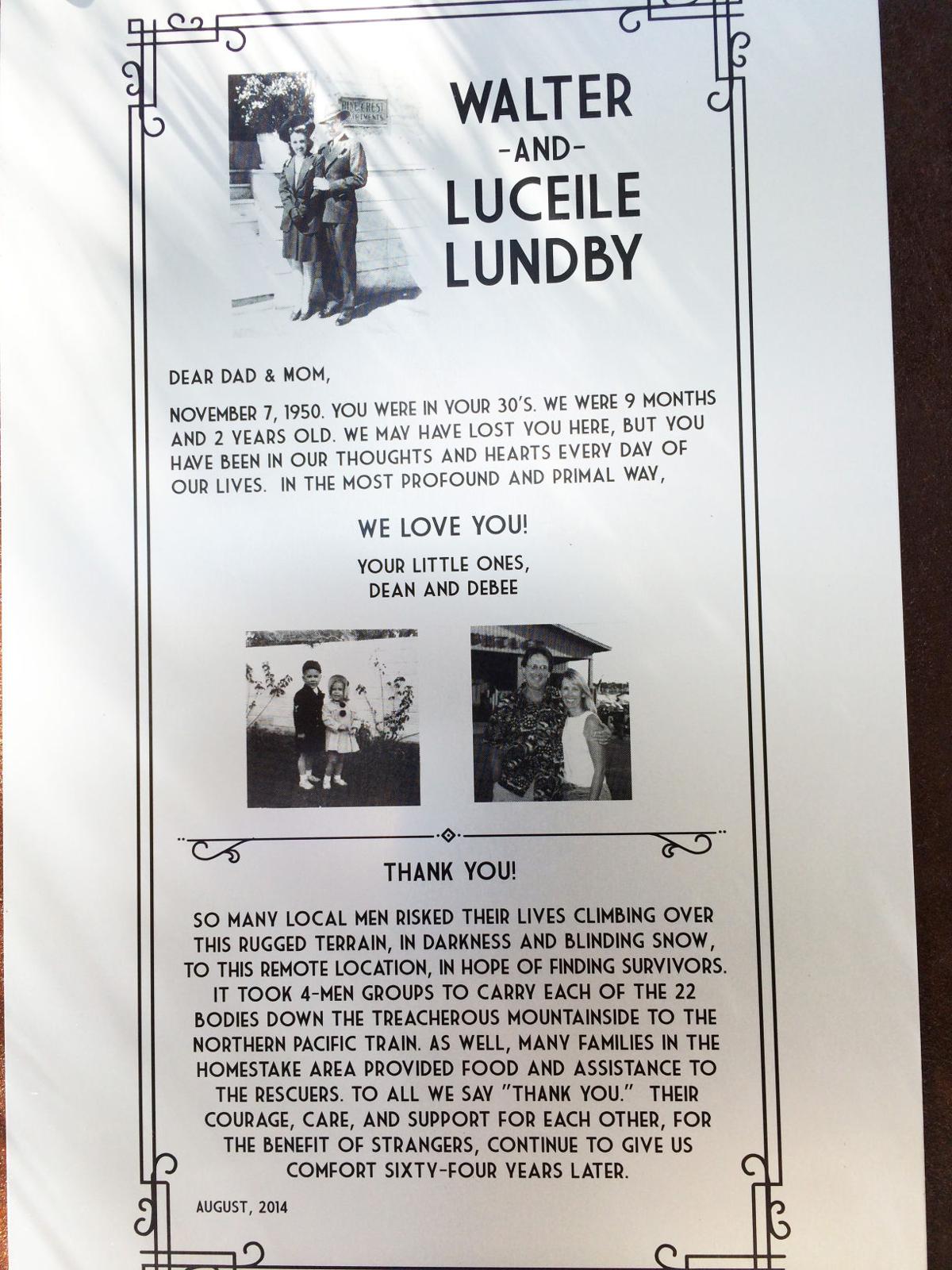 In 1950, searchers from Butte braved the East Ridge’s rugged terrain and snow to retrieve the bodies of 22 victims of a fiery plane crash.

Debee Wachtel’s mother and father were among the dead.

This week, Wachtel came to Butte from her home in California. She researched the rescue operation. She hiked to the crash site, where debris remain strewn alongside granite boulders and towering pines.

She and her husband, Bill, placed a plaque near the wreckage honoring the searchers who recovered her parents.

“I just need to be at the place where my life changed.”

Northwestern Orient Airlines Flight 115 was supposed to land in Butte about 8:30 a.m. on Nov. 7. The Martin 2-0-2 took off from Chicago and stopped in Minneapolis, Billings, Great Falls and Helena.

The flight radioed the Butte airport just after 8:10 a.m. when it began its descent over Whitehall. Butte updated weather conditions in reply.

Five minutes later, the plane slammed into a granite shelf at 8,250 feet, likely killing everyone on board in an instant. Official reports said that the pilot deviated from the “prescribed procedure.”

But 64 years later, officials still aren’t sure exactly what happened. Kristi Dunks, a National Transportation Safety Board investigator who lives in Butte, said the cause determination at the time stemmed more from the lack of information available. Investigators had no way to determine if instruments were malfunctioning or if pilots had health problems. There were no black boxes, cockpit recorders or location beacons.

The flight was 2.5 miles from Butte’s control tower — and only 30 feet from clearing the ridge.

On board that day were Walter and Luceile Lundby, who had been visiting relatives in Billings. They were rushing back home to San Franciso for their son Dean’s third birthday. Debee, their daughter, was just 9 months old.

The children were staying with their aunt and uncle in San Francisco, who learned of Walter and Luceile’s death from newspaper reporters.

“It was days before they got a confirmation,” Wachtel said.

After the Butte airport lost radio contact with the flight, a search was mobilized almost immediately.

A woman at a farm near Homestake heard a “terrific explosion” that “shook the house and rattled all the windows,” according to newspaper reports. Other people saw the plane disappear into a bank of clouds before the mountains but never saw it emerge.

Civilian volunteers were among the first to plunge into the backcountry. Police and other officials from Butte and Belgrade, U.S. Forest Service workers, state highway patrolmen, and eventually the National Guard all roamed the mountain.

At least four planes were launched to find the wreckage but discovered nothing before approaching clouds forced them back to the airport.

A “blinding snowstorm” reduced visibility to a few feet at times. Newspapers called the search area “a primitive wilderness, strewn with huge boulders, some of them larger than the average size dwelling, and covered with a dense growth of timber.”

One searcher said he and a partner walked 15 miles the first day — “We didn’t see a thing.”

Wachtel didn’t learn much about the crash growing up.

She was raised in San Francisco by the same aunt and uncle she was staying with when the plane crashed. She went on to work as a teacher, and was doing research toward her master’s degree at Fresno State University in the 1990s when a box of old San Francisco newspapers in the library caught her eye.

Wachtel wasn’t even sure of the crash’s exact location, just that it was in Montana. But microfilmed newsprint gave her details that weren’t easy to find before the Internet era.

“We finally found a place for this story for us,” she said.

Her brother, Dean, visited Butte in 1994 and tried to hike to the crash site, guided by old newspaper photos. He came close but never found the exact location.

The debris eluded searchers on first day. The effort was called off as darkness closed in. Then, someone smelled a “burned odor” on the east slope. Flashlights and miners’ hats filtered through the snow-covered pines.

The snow lifted about 3 a.m., giving way to a dawn that was “clear as a bell.”

It was about 9 a.m. when a search flight spotted the red vertical tail fin — “all that was left of the big ship” — stark against snow, pine and stone.

The crash site had to be approached going directly up the slope. Searchers arrived just before noon.

“It was a wild, desolate scene, quiet with its ruin and death,” the newspapers said.

Helicopters dropped in food and water for searchers – and supplies to wrap the bodies, or in some cases, only limbs.

A work train was stationed on the Northern Pacific Railroad on the western slope, and soon, charred remains were being painstakingly carried down, four searchers to a body, in what the papers called “a thin line of struggling, stumbling men.”

As the years passed, more information trickled in for Wachtel. But the Internet turned the trickle into a flood.

“It was just like the whole world opened up,” she said.

Through a geocaching site, she connected with others who had visited the crash debris. Six weeks ago, she found slides from a presentation that the NTSB’s Dunks made at the Butte Silver Bow Public Archives last year.

“It’s a piece of our history that remains viable because people interact with it,” archives director Ellen Crain said. “People know about it, go look at it, hike up to it.”

Wachtel decided to head for Butte.

The last body was loaded on to the train just before 7 p.m. Weary searchers, some of whom had been on the mountain for almost 36 hours, were fed coffee, sandwiches and apples.

By the end of the day on Thursday, most of the victims had been identified. Wachtel’s mother was identified that morning, her father in the afternoon.

The coroner called the process “one of the most difficult tasks of my career.” Clothing, jewelry, and dental records were all used to help identify the bodies.

Wachtel’s father was easier to identify because he was the tallest man on the plane. Her mother had her hand in her purse, clutching a checkbook.

Wachtel and her husband visited the archives in Butte last week. They sorted through old news reports about the crash, looking for new information.

They also met Dunks, who provided more details about some technical aspects of the crash.

By Sunday the week the plane went down, the news had been pushed off of the front page of The Montana Standard. But for Wachtel, and for many in Butte, it endures.

“That story doesn’t end with the news cycle,” Wachtel said. “That story goes on exponentially, forever.”

When Dunks gave her presentation at the archives, “The response to that talk was overwhelming,” she said. “Many people, either their parents had served on the rescue team or helped feed them.”

A plaque was placed in 2002 at the site by the family of pilot Lloyd G. Lampman dedicated to the crew and passengers who perished. Now, thanks to Wachtel, another recognizes those who risked their lives to bring the victims home.

“There will always be a hole in my heart,” Wachtel said. “I always go back to this … be compassionate, because you don’t know if someone else has a story.”

Officials in southwestern Montana have located a small airplane after a passenger called Thursday morning and reported it had crashed, Madison County officials said.

Debee Wachtel stands by a plaque she and her husband placed at the airplane crash site on the East Ridge on Wednesday. Wachtel was 9 months old at the time of the 1950 crash, which killed her parents. Her brother, Dean Silber, was 2.