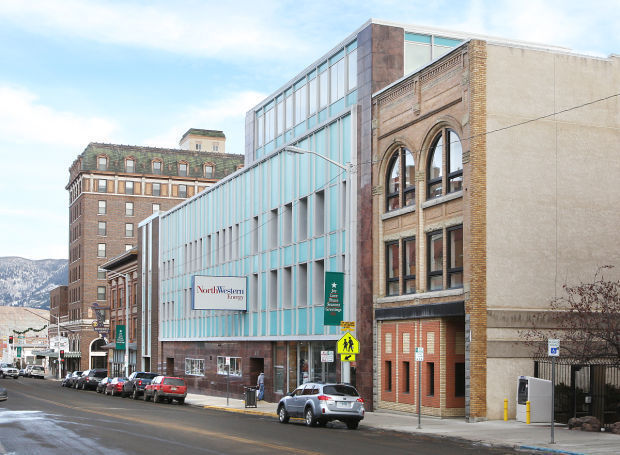 The facade on the old Northwestern Energy building in Butte will start coming down soon as part of a restoration project led by Montana Studios.

Here is an artist's rendition of a restored facade for 40 E. Broadway as proposed by Montana Studios,

Some folks like the 1960s-vintage façade on the old NorthWestern Energy complex in Uptown Butte — whatever color it is.

While some like it, or don’t mind it, there are plenty of people who despise it. It’s an ugly splash of retro-ugly, they say, and nothing about the metal face of the building at 40 E. Broadway goes with the rest of historic Uptown Butte.

Like it or not, it’s coming down soon. The dismantling and removal work could start as early as this coming week, and that alone could take six to eight weeks.

When Montana Studios agreed to purchase the long-vacant complex of buildings from Butte-Silver Bow through an LLC two years ago, part of its plan was to remove the façade and restore them to their original look decades ago. It’s “them” because the complex is actually five buildings that were joined together over the years, meaning five facades.

Montana Studios is a media production company and one reason it was drawn to Butte was the yesteryear look of Uptown and its allure to filmmakers. Butte has been a backdrop to several movie and TV productions in just the past two years.

“The rest of this block, and really this historic, Uptown district, is pretty unique in terms of its historical nature, and from a filming perspective, for productions looking for that in that period, it’s a nice, unique opportunity,” he said.

“So from a Butte character standpoint, we’re excited to bring it back, but it also makes good business sense for what the rest of the goals for the Uptown area are.”

The county inherited the sprawling hodgepodge of buildings in 2016 as part of a deal to keep NorthWestern Energy’s Montana headquarters in Butte. The power company stayed, building a $25 million building at Park and Main.

Montana Studios only paid $1 for the buildings, but county officials considered it a blessing because they had spent four years and tens of thousands of dollars trying to market and sell the building while paying for utilities and security.

Montana Studios has some longer-range renovation plans for the complex, including sound stages and creating apartments and condos for those working on movie, TV and other film projects. Grover has said those would take seven to 10 years to complete.

But three productions already have used space in the complex, Grover said, the most recent being crews for the independent film “Broke” starring Wyatt Russell, the son of actors Kurt Russell and Goldie Hawn.

“They were in there for about eight weeks using it as kind of a base camp and production space, so it’s worked well for the productions that have come,” Grover said.

Workers had previously cut holes in the bluish-greenish façade to get some peeks behind it.

“The tile façade of the old electric building, or Montana Power, is still there and the brickwork on the Beehive (one of the five buildings) looks to be intact,” Grover said. “Unfortunately, anything in buttress style they kind of just hacked off in order to create that flat surface to put the new (current) façade on.

“That’s where the majority of the restoration work will be — kind of determining what we can bring back.”

But the first phase, possibly starting next week, is to get the current façade off. Markovich Construction is doing that job and as part of it, temporary changes are in store for motorists and pedestrians on that block of Broadway Street.

After the façade comes down, architects will spend the winter doing study and design work on how to tackle the restoration. Grover said.

Karen Byrnes, the county’s community development director, believes most folks will like the end result.

“I think it’s going to be very well-received and I think people will look at it as a real step forward in progress,” she said.

Woman gets 40 years in strangling death of Dillon man

J.P. Gallagher on Mining City Tommyknockers: 'I can't endorse these guys coming back to Butte'

Police blotter: Gun in face, swerving on I-15

The facade on the old Northwestern Energy building in Butte will start coming down soon as part of a restoration project led by Montana Studios.

Here is an artist's rendition of a restored facade for 40 E. Broadway as proposed by Montana Studios,