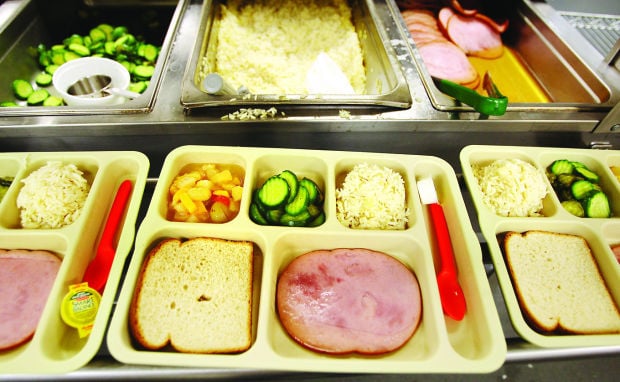 Friday’s midday meal consists of a slice of ham, rice, zucchini, slice of bread, fruit cocktail and a small carton of milk. 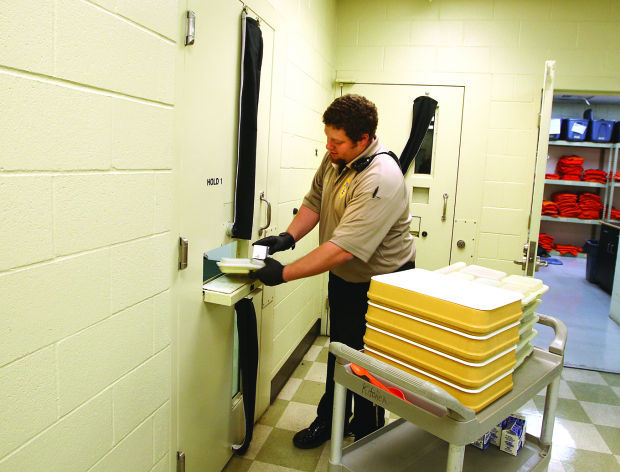 Butte-Silver Bow detention officer T.J. Carter serves the midday meal to prisoners in the intake area of the jail. 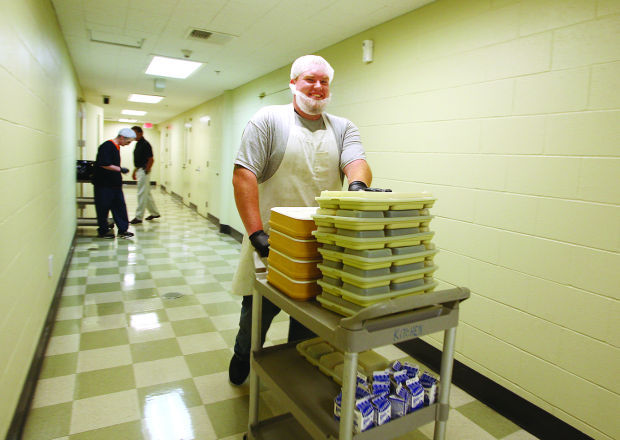 By John Grant Emeigh of The Montana Standard

The Butte-Silver Bow County jail may not have the best atmosphere, but officials say there’s nothing wrong with the food.

Every day the cooks prepare “three hots” for the 70 inmates in a kitchen that would rival any eatery in the Mining City. Jail officials say the food is nutritious and tasty.

But some inmates’ stomachs are grumbling with disapproval.

Chief among them is Matthew Brill, who last week sent a letter to The Montana Standard co-signed by nine other inmates claiming they’re not getting enough to eat. Some inmates, Brill said, are even losing weight.

“Beyond the fact we are being fed the portion size that is not enough to maintain a child much less an adult. It is a sad reality. There are multiple guards who agree and comment on how little we are fed,” Brill wrote in the letter published Aug. 5.

Brill, 39, has been incarcerated since July 24 on a theft charge and out-of-jurisdiction warrants.

Sheriff Ed Lester assures the public that prisoners at the Butte jail are getting enough food. The prisoners’ daily dietary consumption is carefully monitored and approved by dieticians.

“They’re not starving over there,” Lester said. Even Brill admits some inmates were overweight to begin with.

Earlier this year, the Butte jail switched to a new menu under the direction of Food Services of America, one of the nation’s largest food-service providers. The company ships a five-week menu and food to the jail, where it’s prepared.

“We follow these recipes to a T,” said jail supervisor Mark Johnson.

The jail tracks every calorie in a report that accompanies each week’s menu. The report also breaks down every gram of protein, carbohydrates, fat, mineral and vitamin. It even lists measurements for essential- and non-essential amino acids.

On Friday, the four cooks prepared a lunch that included a 3-ounce slice of baked ham, a half cup of rice pilaf, steamed zucchini, a slice of wheat bread and fruit cocktail. The total calorie count for the three meals that day: 1,831. The highest calorie count for last week came on Wednesday at just more than 2,400.

The federal Centers for Disease Control and Prevention reports that the average man consumes about 2,475 calories a day, the average woman about 1,833.

While Brill’s letter complained of inmates losing a large amount of weight in a short period, jail staff regularly monitors inmates’ weight. Johnson said inmates are weighed when they’re booked and once every month after. If an inmate shows extreme weight loss or gain, the jail adjusts the inmate’s caloric intake.

“You can’t have a guy come in at 100 pounds and have him leave looking like me,” said Johnson, who weighs more than 200 pounds.

Johnson hasn’t heard complaints from inmates on the quality or taste of the food, he said, but there has been some dissatisfaction about the portions. Prior to the menu change over, jail cooks made the food from scratch and portion sizes were probably larger, Johnson admits.

In fact, the jail’s cooks were so generous there was a running joke with prisoners that some were getting arrested just to have a good meal.

“I think (the prisoners) eat better than some of the people on the streets,” Johnson said.

NOT EVERYONE IS COMPLAINING

Prisoners also have access to snack food, for a cost, through a commissary.

Robert Hoffman, 50, has been in jail about four months on drug charges. He helps the kitchen staff prepare the meals, and he likes the grub.

“I’ve nothing bad to say about it,” he said. “Not everyone here is complaining about the food.”

In fact, Hoffman is grateful for his three hots.

“I’ve been homeless for several years,” he said. “They didn’t arrest me, they rescued me.”

— Reporter John Grant Emeigh may be reached via email at john.emeigh@lee.net or phone at 496-5511. Follow him at Twitter.com/@johnemeigh.

The Lewis and Clark Detention Center in Helena has a different system for feeding prisoners. It brings in food prepared at the Montana State P…

Breaking down the calories

The average man consumes about 2,475 calories a day, the average woman about 1,833, according to the federal Centers for Disease Control and P…

One week of food menus at the Butte jail.

Massive models of planets light up at Czech planetarium

Friday’s midday meal consists of a slice of ham, rice, zucchini, slice of bread, fruit cocktail and a small carton of milk.

Butte-Silver Bow detention officer T.J. Carter serves the midday meal to prisoners in the intake area of the jail.