One of the most common and contested statements about Butte is that it was home to 100,000 people in 1917, the largest city from Minneapolis to Seattle. Is that really true?

Census figures for Butte are difficult to rely on for several reasons. The city of Butte was much smaller than the city-county of today, but pretty much, the people lived in what we would think of as Butte today, a metropolitan area, while Walkerville has always had a separate census count. I think it’s most reasonable to look at the population of Silver Bow County as the population of Butte.

There also exists an official US Census estimate for 1917, which lists Butte (city) at 93,981, and Silver Bow County at 36,212. Are we to presume that the county number is everyone outside the city, so the total county population would be 130,193? Based on the statewide total, that’s exactly what it appears we are to believe; the two numbers are separately part of the state total, and one does not include the other.

It’s common to find references in the press of the day to Butte as a city of 90,000. It’s also pretty well established that censuses typically under-counted some populations, such as the Chinese, prostitutes, and transients, which made up a large part of the population in 1917. The census shows no more than 400 or so Chinese in Butte, but Rose Hum Lee estimates as many as 2,500 at the peak. So it is probably fair to see the 1910 and 1920 census counts as noticeably low.

There’s also no doubt that 1917-1918 was the peak of everything in Butte. Copper production records are clear that the metal output was greatest then. Company figures give a total of 14,500 underground mine workers in 1917, on the order of 40% more than in 1910.

The bottom line is, we cannot be sure. There is no proper count of Butte’s people at the peak in 1917-1918. I am comfortable saying Butte reached “close to 100,000” in those years and was the largest city in the region from Minneapolis to Denver to Salt Lake City to Spokane, since Spokane — at 104,000 in 1910 — was almost certainly always larger than Butte. But I could be wrong! 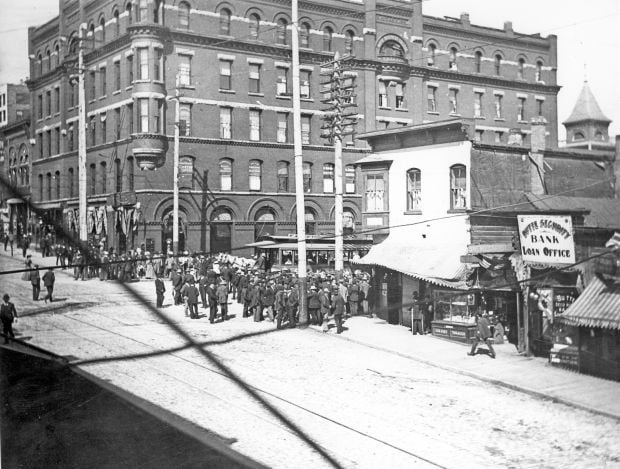 Here’s a view of Uptown Butte, circa 1917. The photograph features the corner of Park and Main Sts., which was home to the Medical Arts building.