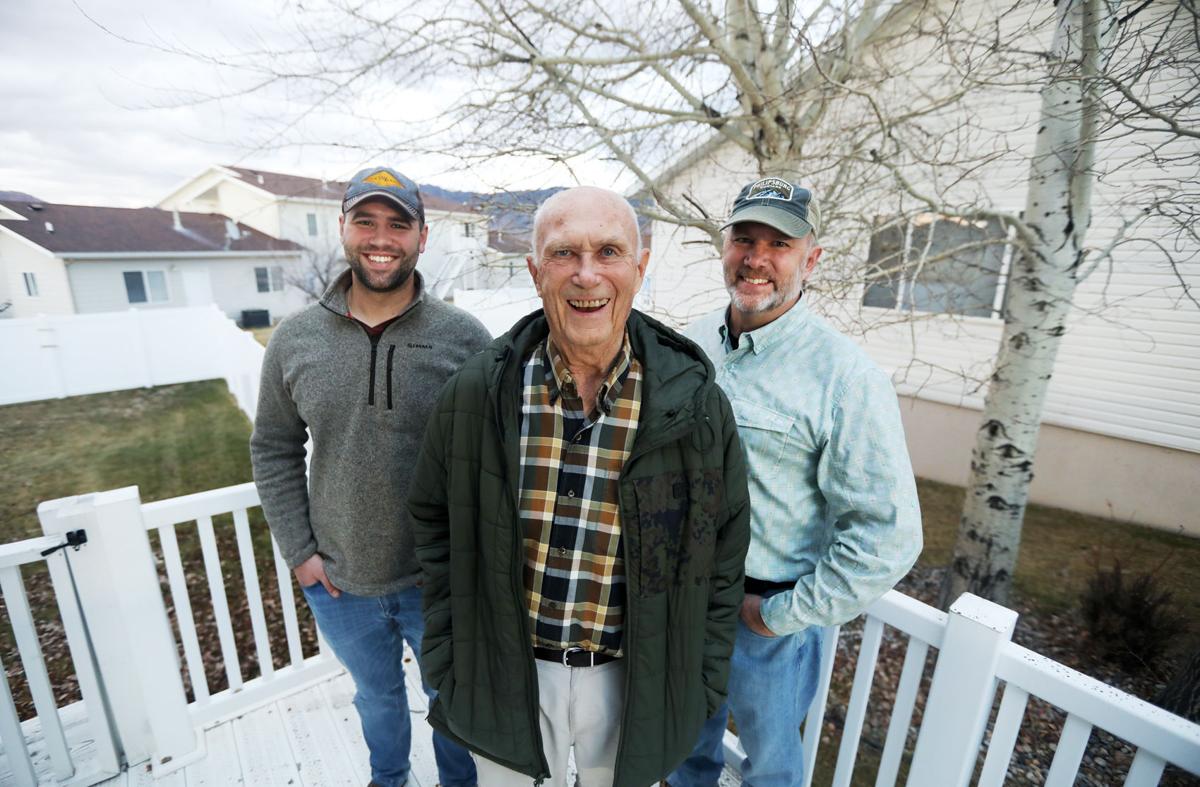 Jim Thompson, center, is photographed with son Scott and Josh Thompson, one of Jim's grandchildren, at his Butte home days before the annual Thompson Family Food Drive taking place Saturday in Butte. 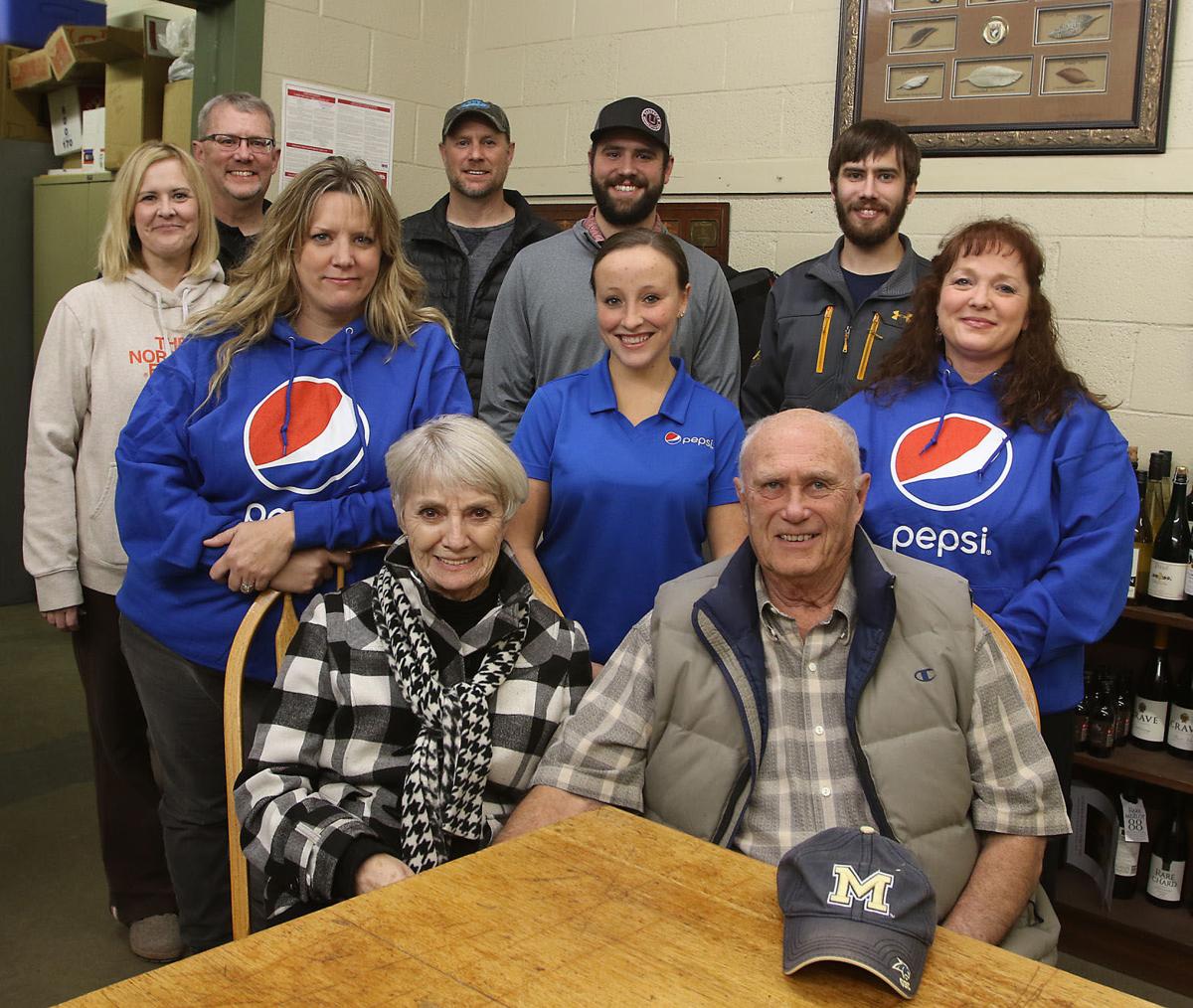 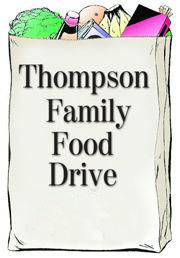 But this year, it’s more special than ever. Because the event is the most fitting tribute possible to Margie Thompson, a family matriarch and a community giant. Butte lost Margie this year, but this food drive is the most emphatic possible demonstration that her spirit and her impact on Butte lives on.

Scott Thompson talks about his mother’s determination. “Margie just didn’t take no for an answer,” he said. “Whatever the community needed, she got it done.”

It’s pretty clear that Scott inherited that trait. He is bound and determined that this year’s drive will be the best ever. “What we’re going to do this year is make this drive the biggest ever,” he said. “That means we have to come in with more than 80,000 pounds of food and more than $65,000 in cash.”

“We’re going to crush this drive this year in her honor.”

Ron Davis remembers the first food drive in 1989. Davis, then assistant GM of Butte Broadcasting, KBOW am and KOPR fm, wanted to help spearhead a citywide food and winter clothing drive. Realizing they would need the help of somebody with a fleet of trucks, he contacted Thompson Distributing.

Davis and Scott Thompson recalled that first drive covered only the neighborhood from Continental Drive to Harrison Avenue and Grand Avenue to the Interstate. They had just two trucks; the weather was miserable and the job took all day.

This year, by contrast, volunteers will reach door-to-door in every Butte neighborhood as well as Rocker and Ramsay, and they’ll be done in two and a half hours.

Last year, COVID meant volunteers didn’t go door to door. The drive depended on many staging locations where people could drop off donations.

“It’s exciting to get back to going door to door,” Scott Thompson said. “Our volunteers love it and so do our donors.”

In the immediately ensuing years after that first drive, Davis said, Jim Thompson took a major role, bringing in Brad Belke of the 1590 Search and Rescue, volunteer fire departments, the Butte-Silver Bow Sheriff’s Department and others to help.

The food drive grew and grew. Each year, the entire Thompson family participated along with the crew from Thompson Distributing.

In 2017, as Thompson Distributing’s business model changed, it meant the drive needed another entity with a fleet of trucks to help.

“We were so fortunate to get the Harrington family to come on board with us when our family business didn’t have the fleet to make this happen by ourselves anymore,” Scott Thompson said. “When we approached Jim Bennett, there was no hesitation whatsoever. Within 30 seconds he was saying yes.

Bennett was insistent that the Thompson name stay on the drive. “He said this would continue to be the Thompson Family Food Drive,” Scott Thompson said. “And we’re grateful for that too.”

This will be the fifth year of Harrington’s involvement.

Josh Thompson, 31, is Scott’s son and Jim and Margie’s grandson. He has been involved in the drive for as long as he can remember (it’s a year older than he is.) But now he’s positioned to take a much more significant role.

Josh reached out to Butte School District No. 1 Superintendent Judy Jonart with an idea: What if the city’s elementary schools had a contest to see which one could donate the most food?

This year’s contest was a first — and it was impressive.

Whittier School led the way with a stunning 3,493 pounds of food. Hillcrest was second with 1,157, just edging out West Elementary’s 1,138. Following were Margaret O’Leary with 885, Emerson School with 771 and Kennedy School with 117 pounds — totaling an amazing 7,561 pounds and a huge head of steam for the drive.

There’s a traveling trophy that will reside at Whittier for the next year. In December 2022, it will be up for grabs again.

The cash total has also gotten off to an impressive start. Already, the drive has received the following donations:

Cash donations mean a lot, because with the Food Bank’s purchasing power, every $1 in cash means $4 worth of food.

Even though the drive is back to going door-to-door, organizers decided it would best to decentralize the volunteers’ lunch, which will be split up at several locations.

But it’s clear that volunteers will be well-fed again this year. Truzzolino’s donated 450 lunch pasties, which will be packaged with apple chips, a treat, and pop or water.

“We love to call the day of the drive ‘organized chaos,’ Scott Thompson says with a grin. “We couldn’t do this without our incredible volunteers.

Back in October, Scott Thompson said, he heard his mother’s voice.

He appreciates the fact that this drive started with Margie’s involvement with youth, and with her “always wanting to make Butte a better place.”

And that’s why he’s so determined that this year’s drive will be a record-breaker.

"It’s definitely for her this year," he said.

"It’s her going-away party to heaven."

WHAT: Thompson Family Food Drive organizers are striving to make this year’s event in memory of Margie Thompson, who died Aug. 17, their best food drive yet.

TIME: 10 a.m. to 1 p.m. Donors may leave bagged items near their mailboxes for pickup.

For cash donations, use this link:  https://tffd.betterworld.org/campaigns/thompson-family-food-drivefbclid=IwAR2nuh4DDjEymxMrsXv4TVVGtcbK0g18Wr8vUEwCt6tf7OzmZFwbj-9pK2s

Jim Thompson, center, is photographed with son Scott and Josh Thompson, one of Jim's grandchildren, at his Butte home days before the annual Thompson Family Food Drive taking place Saturday in Butte.