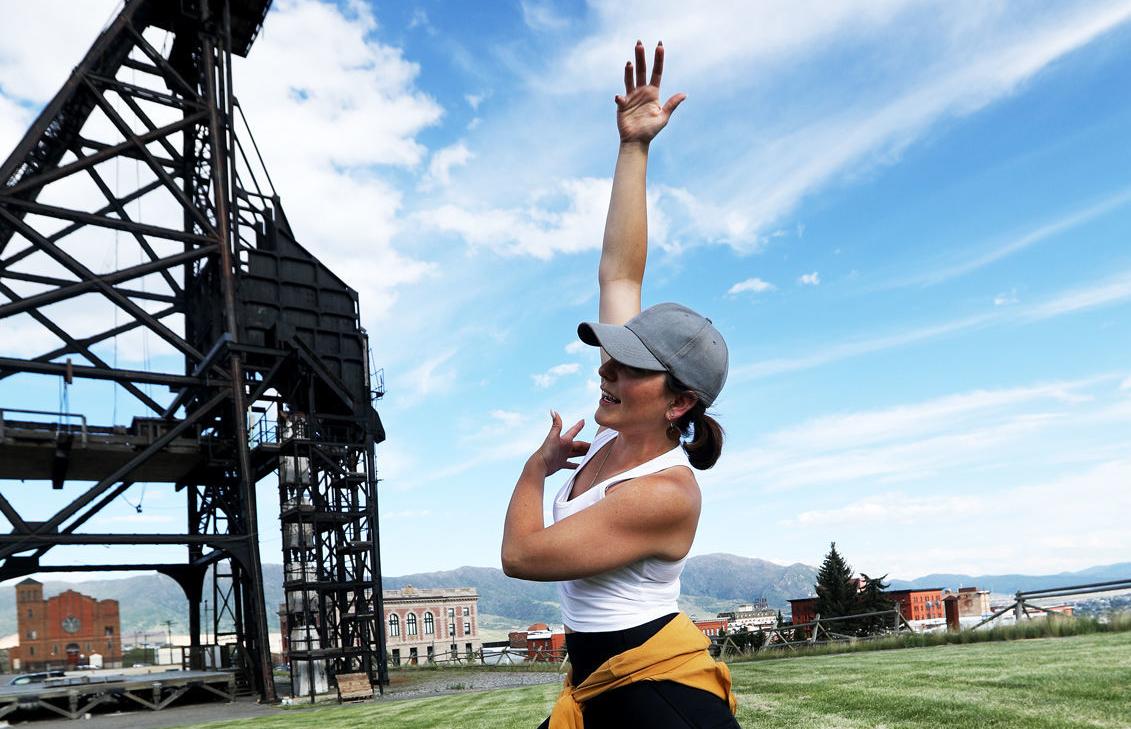 Kacy Bond, a certified yoga instructor with Rooted Tribe and the Butte Country Club, leads a class of about 20 participants on Tuesday evening on the lawn at the Original Headframe as part of a Butte-Silver Bow Parks and Recreation event to engage the community in public spaces. Bond collects a suggested donation for her services that is put toward funding for swimming lessons for Butte children. The Original Mineyard has been remodeled to host community events like the Montana Folk Festival and Snöflinga, among other events. 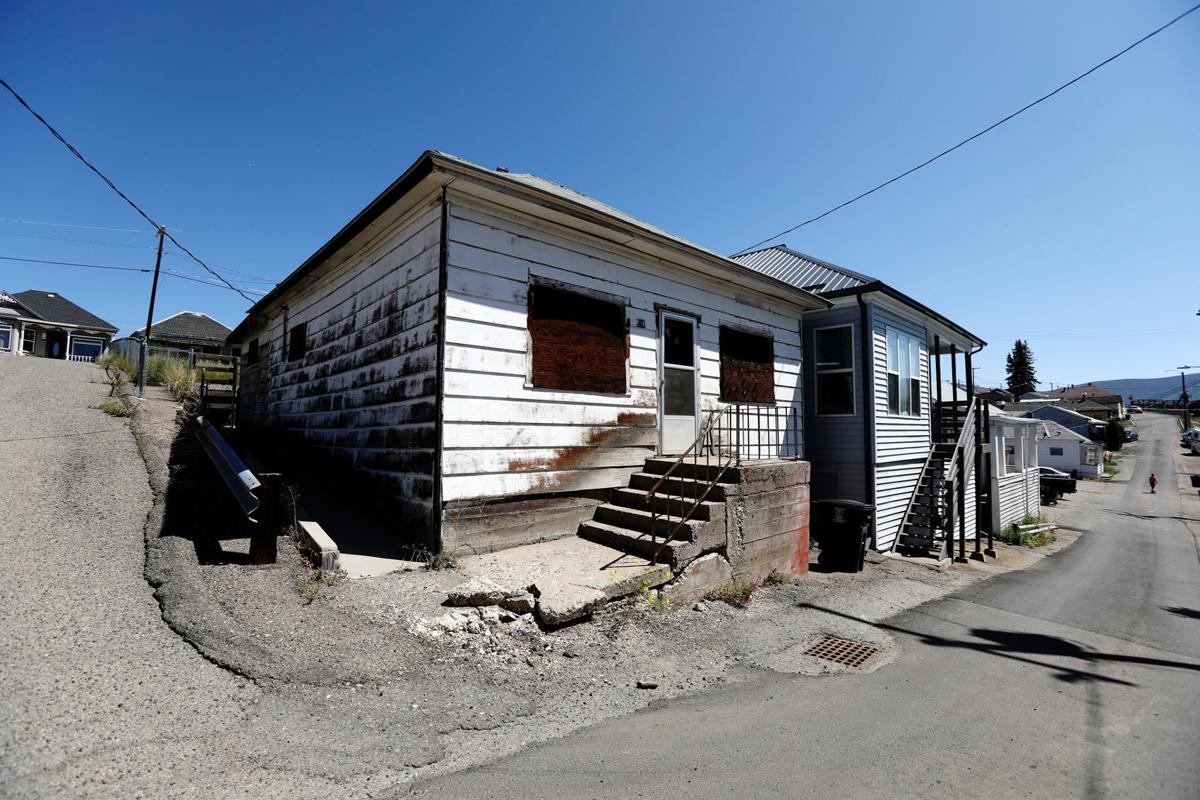 A house on Virginia Street in Uptown Butte is just one of some 465 properties evaluated in 2019 in an effort to update the county’s vacant buildings registry.

People ranked historical character, abundance and access to public lands and overall affordability as the top three greatest assets in Butte-Silver Bow County in a survey that’s included in a draft plan for future growth.

Of 421 responses for most questions, urban decay, lack of retail shopping and the perception of the county by others were the top three weaknesses.

Numerous people who added individual comments said the people and sense of community were the best assets, and many said a “good old boy” network and nepotism in county government, and treatment of newcomers, were top weaknesses.

“If you’re not in, you’re nobody — the fact that the government hires from friends and family rather than through merit,” one respondent wrote.

Another said, “A powerhouse of last names that do not allow for anyone to give new ideas, help to make changes or expand Butte. The town is too closed off to the idea of new people coming in and helping to change and improve this town.”

The survey was conducted last year as part of a long process to update Butte-Silver Bow’s growth policy — a master plan of sorts that helps guide decisions on development, land use, housing and public investment in schools, utilities, roads and other infrastructure. The last one was conducted in 2008.

They are plans, not regulations, and can serve as foundations to such things as zoning, jurisdictional boundaries, and competing for state and federal grants. The public can view a draft of the updated policy on the county’s website and officials held a WebEx presentation this week to introduce the plan to the public.

Comments will be presented to the Planning Board on July 30 for review, a public hearing will be held on the draft plan on Aug. 27 and a date will be set for the Council of Commissioners to consider formal approval. Citizen feedback, including from the survey, helped shape the plan.

The survey sought feedback from residents throughout the county on a variety of issues. They were available on the county’s website and hard copies were distributed at the Sportsman Hotel in Melrose and the courthouse, library and health department in Butte.

Most of the 421 respondents said they were from Butte, but 13 percent were from more rural areas including Melrose, Ramsay, Divide and Rocker.

Out of six other choices for community values, including parks and recreation, Montana Tech, small-town friendliness, and economic opportunities, the latter came in dead last. County officials and private consultants said that could be viewed a number of ways.

But it may have come in last because the county is lacking in it, they said in the draft plan. “(It’s) not because residents don’t want these opportunities, they’re just not highly valued because in many cases they don’t exist.”

When asked to select the county’s top three assets among 13 choices, historic character, culture and amenities came out on top, followed by abundance of and access to public lands and then overall affordability.

Montana Tech and educational opportunities came in fourth, followed by parks, trails and recreation amenities in fifth and Uptown Butte in sixth. The bottom two were the county’s business park and “major industrial employment opportunities,” and health care facilities and services.

Of 34 write-in responses describing “other” choices, nearly half said the people here or the sense of community were the greatest assets.

“Friendly residents for the most part,” one said. “The sense of community and the spirit of our citizens” said another.

Of 13 listed weaknesses, the most selected one by far was “urban decay (vacant buildings, buildings in disrepair),” followed by lack of retail opportunities within the boundary of Butte and Walkerville, and in third, perception of the county by others.

The area’s Superfund designation is often cited as a big obstacle to drawing more businesses and residents to Butte, but only 53 respondents ranked it as a top-three weakness, putting it eighth overall. But the Berkeley Pit by itself got 88 hits.

More than 100 respondents wrote in comments about weaknesses, 21 of them citing local government or aspects of it, including lack of leadership, poor dealings with the public or it simply being too large.

Nearly half of those mentioned nepotism and/or a “good old boy” system in county government hiring and responding.

“The good old boy network,” one said. “A neighbor told me I could not get a response because I didn’t know a public employee’s mother. He (the neighbor) called her and she said she called her son to come out and look at the issue. Seriously???”

People also listed high taxes, homelessness and prevalence of drug use, among other things, and one stated, “Fear-based newspaper articles that give an inaccurate perception of Superfund-related health issues and effectiveness of ongoing remediation.”

One question noted historically, mining, Montana Tech and health care have long been drivers of the local economy and it asked people to select their top three choices for the types of economic development that should be pursed.

The top three answers were light manufacturing in the industrial park and elsewhere, reuse of the Butte Plaza mall and recreational tourism, especially in rural areas. Industrial uses near highway interchanges and rail-yards also got a lot of votes, as did cultural events and festivals.

When asked what activities should be promoted more to attract visitors, historic sites and buildings finished first, followed by business recruitment, then public access to hiking, biking and amenities like the Big Hole River, then music festivals.

There were several questions about housing on the survey. One listed 10 housing-related issues in the county, with respondents checking all that apply. Quality of rental units got the most checks, followed by quality of units to own and then affordability of rental units.

One question asked what local government should do to stimulate redevelopment of vacant buildings. “Provide assistance with finding funds for rehabilitation” was No. 1, “upgrading public infrastructure” was No. 2 and “enforce development code requirements for building safety and nuisance control” was third.

There were a few questions about rural areas, including one that asked for the best ways to preserve the character of small communities while also allowing them to grow in size.

The top choice was adopting zoning and design guidelines to encourage a mix of uses, followed by designating local resources to rehabilitate vacant or underutilized buildings. Promoting rural places as destinations for fishing, trails and outdoor recreation got the third most votes out of seven possible choices.

The full survey, additional comments and the entire draft plan for the next growth policy can be found at https://www.co.silverbow.mt.us/DocumentCenter/View/17875/Butte-Silver-Bow-Growth-Policy-Update-4120-PUBLIC-REVIEW-DRAFT-

Kacy Bond, a certified yoga instructor with Rooted Tribe and the Butte Country Club, leads a class of about 20 participants on Tuesday evening on the lawn at the Original Headframe as part of a Butte-Silver Bow Parks and Recreation event to engage the community in public spaces. Bond collects a suggested donation for her services that is put toward funding for swimming lessons for Butte children. The Original Mineyard has been remodeled to host community events like the Montana Folk Festival and Snöflinga, among other events.

A house on Virginia Street in Uptown Butte is just one of some 465 properties evaluated in 2019 in an effort to update the county’s vacant buildings registry.