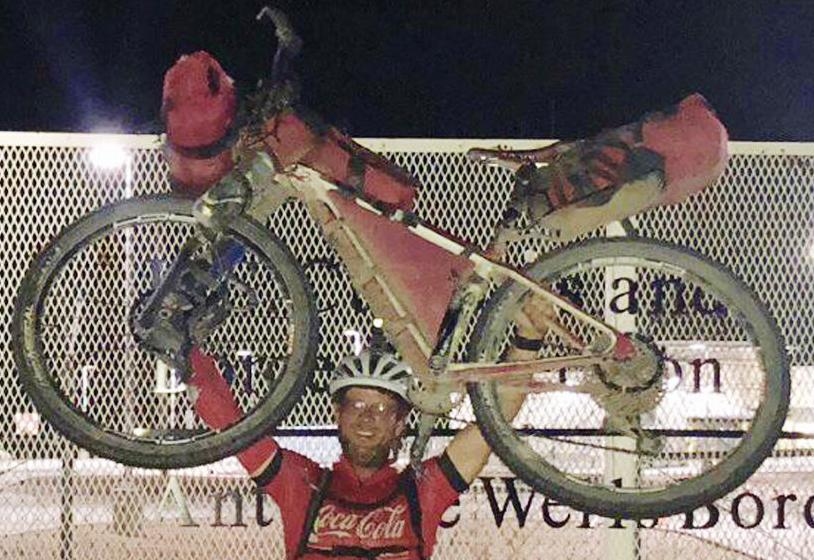 After crossing the Tour Divide finish line around 3 a.m. on July 1 in Antelope Wells, New Mexico, John "Bear" Stillwagon lifts his mountain bike up in triumph. 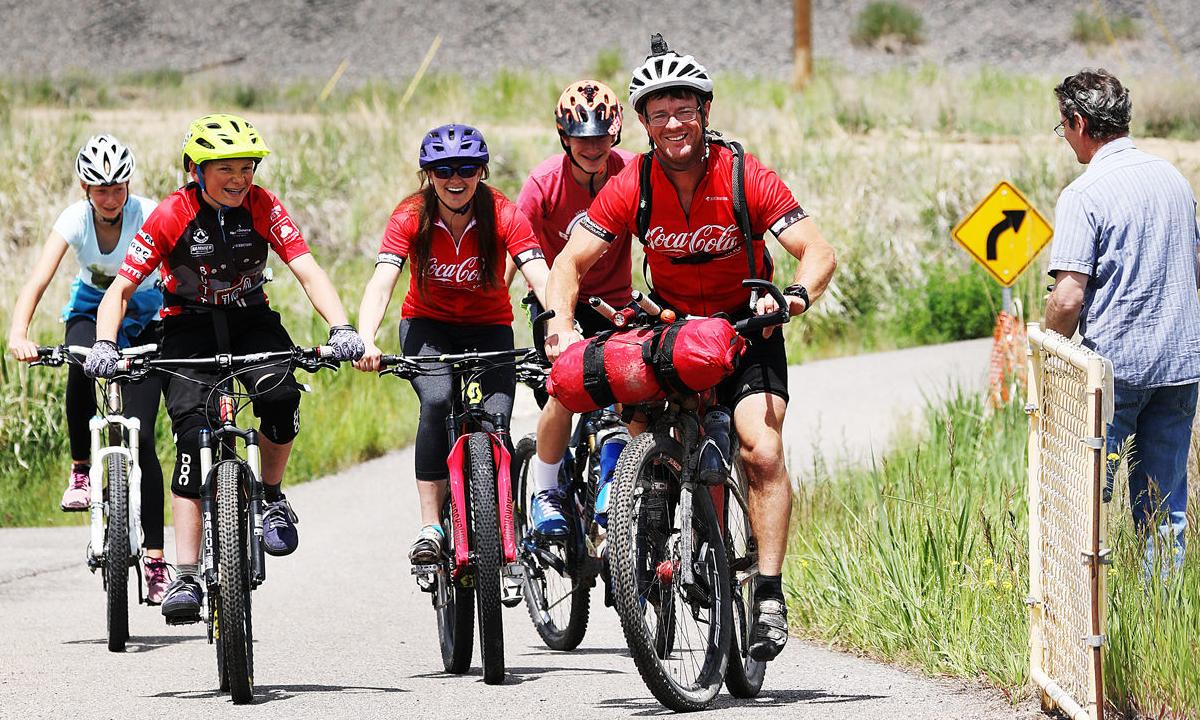 John "Bear" Stillwagon rides through Butte with local bicyclists including members of the Copper Sprockets youth bike racing team in June, just a few days after leaving the Tour Divide start point in Alberta, Canada. Stillwagon was in the top 20 riders at the time. The race is a 2,745-mile mountain biking trek from Canada to the Mexico border. 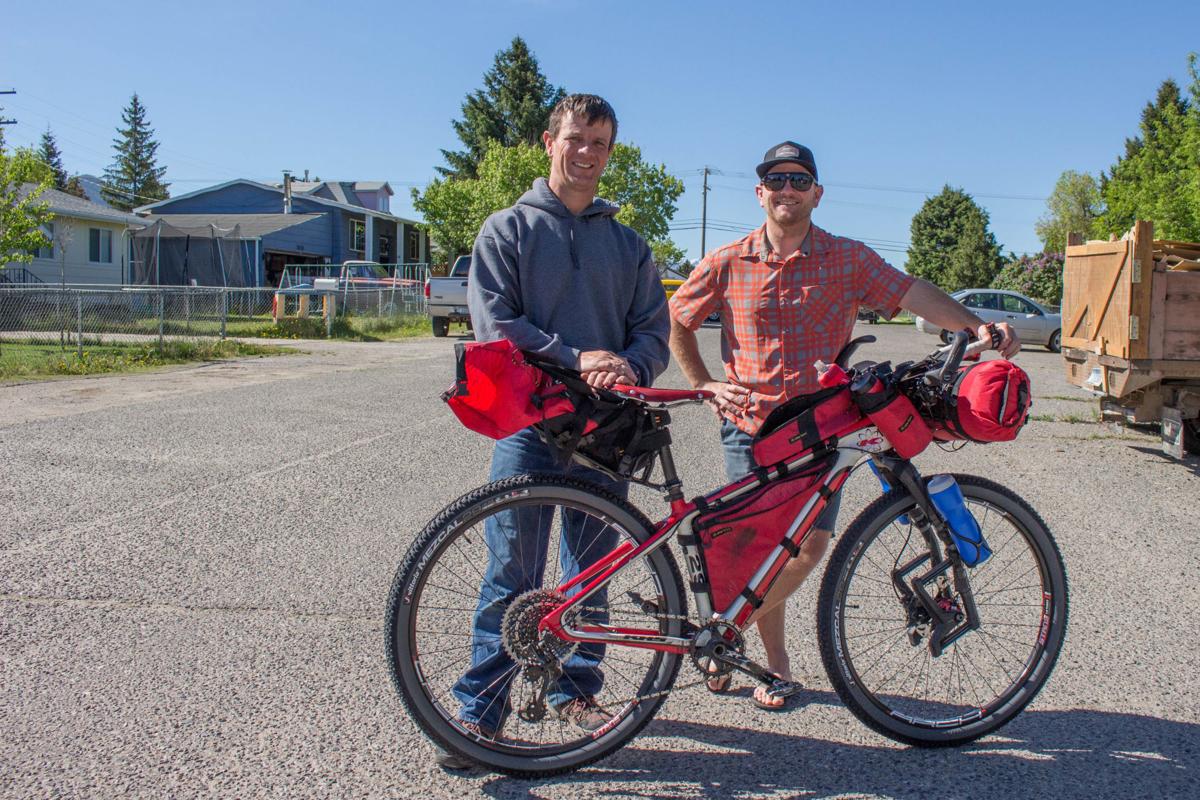 John "Bear" Stillwagon, left, and his brother, Nate Stillwagon, stand outside of Bear's home in Butte in June just hours before heading up to Canada for the start of the Tour Divide, a mountain biking race that covers 2,745 miles from Canada to the U.S.-Mexico border.

And the Butte native didn’t just finish the race in 16 days, 19 hours — he tied for ninth place out of more than 150 competitors.

About two weeks after Stillwagon finished and less than two weeks until his next racing venture, the Butte 100 mountain biking race, he reflected on his experience racing north to south across some of the most beautiful and unforgiving ecosystems the western U.S. has to offer.

“I watched movies, YouTube videos and read about six books about the race before I started,” Stillwagon said. “But you don’t really know what it’s like until you’re actually there experiencing it.”

Stillwagon’s experience started June 14 in Banff, Alberta, with a nonchalant ride to the YMCA starting line with his brother, Nate Stillwagon.

Bear said he worked to position himself at the front of the group and aimed to make it over 200 miles to Fernie, British Columbia.

On that first day, he said he encountered one of the more difficult sections of the race which he described as a series of boulder fields that riders had to push, not pedal, their bikes up and over.

After climbing to the top of those boulders, Stillwagon said he threw his arms up in triumph as he believed he’d made it out of this tricky terrain — but quickly realized after looking ahead that he was only about an eighth of the way through.

“That first day was the hardest thing I’d ever done in my life,” Stillwagon said. “And I knew every day beyond was going to be harder.”

Over the next 16 days of the race, Stillwagon averaged about 3 and a half hours of sleep each night. He constantly ate things while on the bike like candy bars and beef jerky sticks, drank lots of water and Coca-Cola, and gorged every night, often ordering two meals at restaurants in towns along the route.

While he talked about the positives of the breathtaking scenery and simple lifestyle, Stillwagon also talked about falling asleep while racing on his bike and even hallucinating as a result of his fatigue.

“Every night I would go to bed exhausted and wonder how I was going to get up and do this in the morning,” Stillwagon said. “But every morning I’d wake up and feel totally recovered … it wasn’t ever my legs, it was my mind that shut down first.”

But when his mind started to tire that’s when his support system at home in Butte would kick in, Stillwagon said.

On the fifth day of his Tour Divide race, Stillwagon said he was really struggling to stay awake on his bike. He made an extra stop to refuel at a restaurant in Polaris and said he was having a hard time getting locked back into the race.

Then he saw the photo of himself and the Copper Sprockets youth mountain biking athletes who rode with him as he passed through Butte that was captured by The Montana Standard and posted online.

“I saw that photo of everyone smiling and it changed me. It was a turning point for me and helped me get my mind back,” Stillwagon said.

This feeling of hometown support kicked in again at the Brush Mountain Lodge in northwest Colorado when Stillwagon thought for sure his race was over.

A snowstorm had made this part of the route impassable. Several world class riders ahead of Stillwagon had attempted the snowy mountain section and turned back to the lodge, where he said they were plotting their return home or an alternate route when he arrived.

“I thought, ‘Is this where I die, get frostbite or lose my fingers?’” Stillwagon recalled. “I’m going to be honest, I went up to my room and cried my eyes out.”

Stillwagon said about the same time he was deciding between either taking on the section with a few other riders or finding a way back to Butte, he received an encouraging email from his youngest kid.

“That changed everything,” Stillwagon said. He went on to say he was able to make it through the snowy section both by pedaling and pushing his bike over 4 miles. It was a big day for him, Stillwagon said.

Although Stillwagon’s experiences were his own and he said he rode most of the race days alone, he spent every night in the same place as Lucas Ratliff of Fort Collins, Colorado, and they quickly became friends.

As the two men rode nearer and nearer through the heat of New Mexico to the finish, Stillwagon said they decided to ride in together, tying for ninth place, instead of racing all the way to the end.

When they crossed the finish line in Antelope Wells, New Mexico, just outside the U.S.-Mexico border, Stillwagon said it was anticlimactic.

“It was odd, we both took a photo and then left with our families,” Stillwagon said. “I don’t think it sunk in that I finished until the next week.”

The Tuesday after Stillwagon completed the Tour Divide, he was back in Montana. He caught the end of the Copper Sprockets practice that evening, said hi to his athletes and fellow Butte cyclists, then went off on an overnight backpacking trip on the East Ridge for the Fourth of July. His brother finished the race about two-and-a-half days after he did and placed 19th overall, Stillwagon said.

That Friday, Stillwagon was back on the bike preparing for the Butte 100 race, which will kick off on July 27. As he was pedaling on Continental Drive, he rode past a couple from Denver headed north up the Tour Divide who he had passed on his way down south, Stillwagon said.

So, he rode into town with them and showed them around Butte before they went the rest of the way up to Canada.

Stillwagon also said he's had text conversations with Ratliff every day since they crossed the finish line together, and feels a deep sense of camaraderie with the people who rode the Tour Divide with him.

“It sounds corny, but you really do make friends for life,” Stillwagon said of the Tour Divide race experience. “No one else really understands what you go through.”

Despite the difficulty and extremes of the Tour Divide, Stillwagon is thinking about taking on the 2,745-mile trek again if he gets the opportunity.

“The whole way, I kept saying to myself this is a once-in-a-lifetime thing. But then the Monday night after I finished, I was already thinking about trying it again,” Stillwagon said. “To me, it’s a different way of life, you live like an animal for 17 days and nothing else matters.”

But although the Tour Divide may be in the cards again for Stillwagon, his focus in the near future is competing in the Butte 100 mountain biking race. He’s been working on building up his speed for the much shorter trek and feels he’ll be ready to compete again by next weekend.

“The pressure is back on to perform,” Stillwagon said. “And I think I can do it.”

One of the things that is enjoyable about birding is the unexpected birds that are observed that are rare, out-of-season, or out-of-range.

What were you thinking??? Mountain biking and trail-building destroy wildlife habitat! Mountain biking is environmentally, socially, and medically destructive! Bicycles should not be allowed in any natural area.

What were you thinking??? Mountain biking and trail-building destroy wildlife habitat! Mountain biking is environmentally, socially, and medically destructive! Bicycles should not be allowed in any natural area.

Some people dream, some people try and a few people achieve. Congratulations, you are now in the achievers club! Well done.