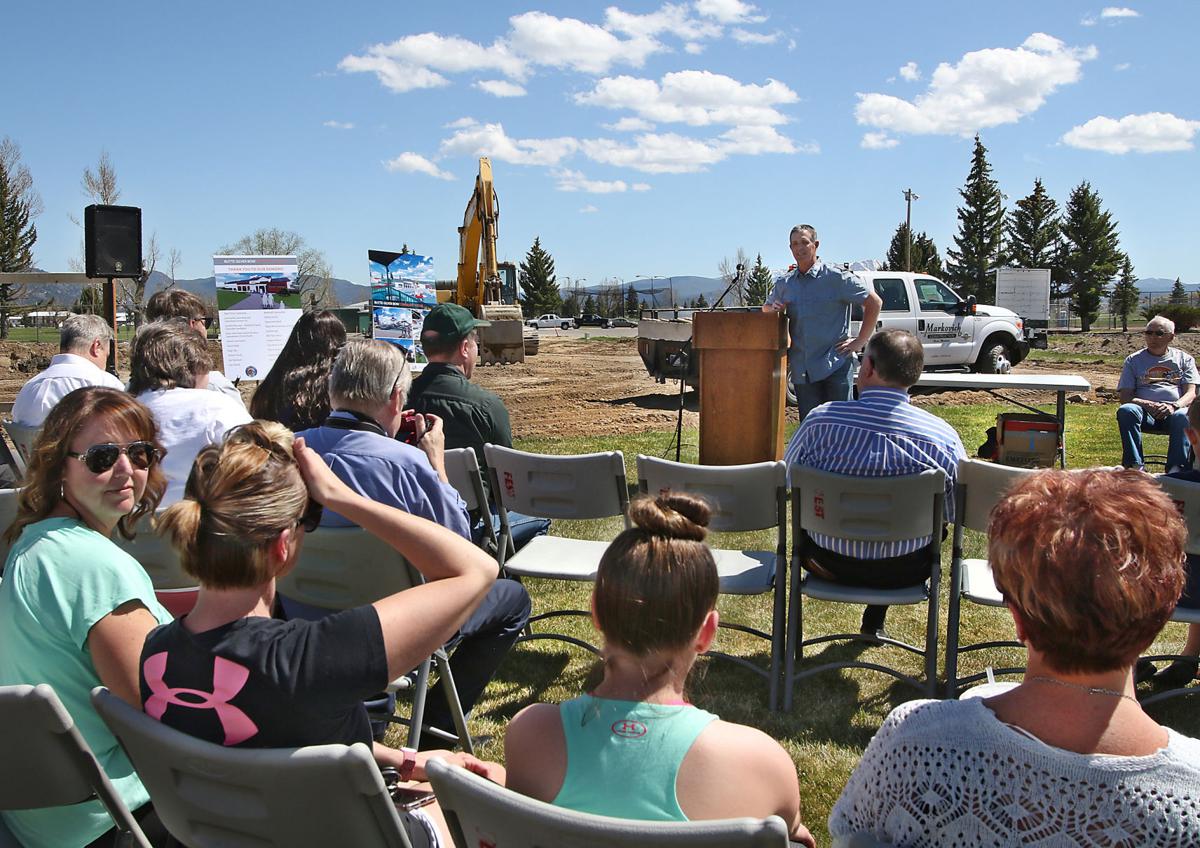 Butte-Silver Bow Parks and Recreation Director J.P. Gallagher hosts the ground breaking of Butte's new swimming pool and waterpark Wednesday afternoon in Stodden Park. Around 50 people attended to hear city-county officials speak to the merits of the voter-approved project that should be completed in the summer of 2018. 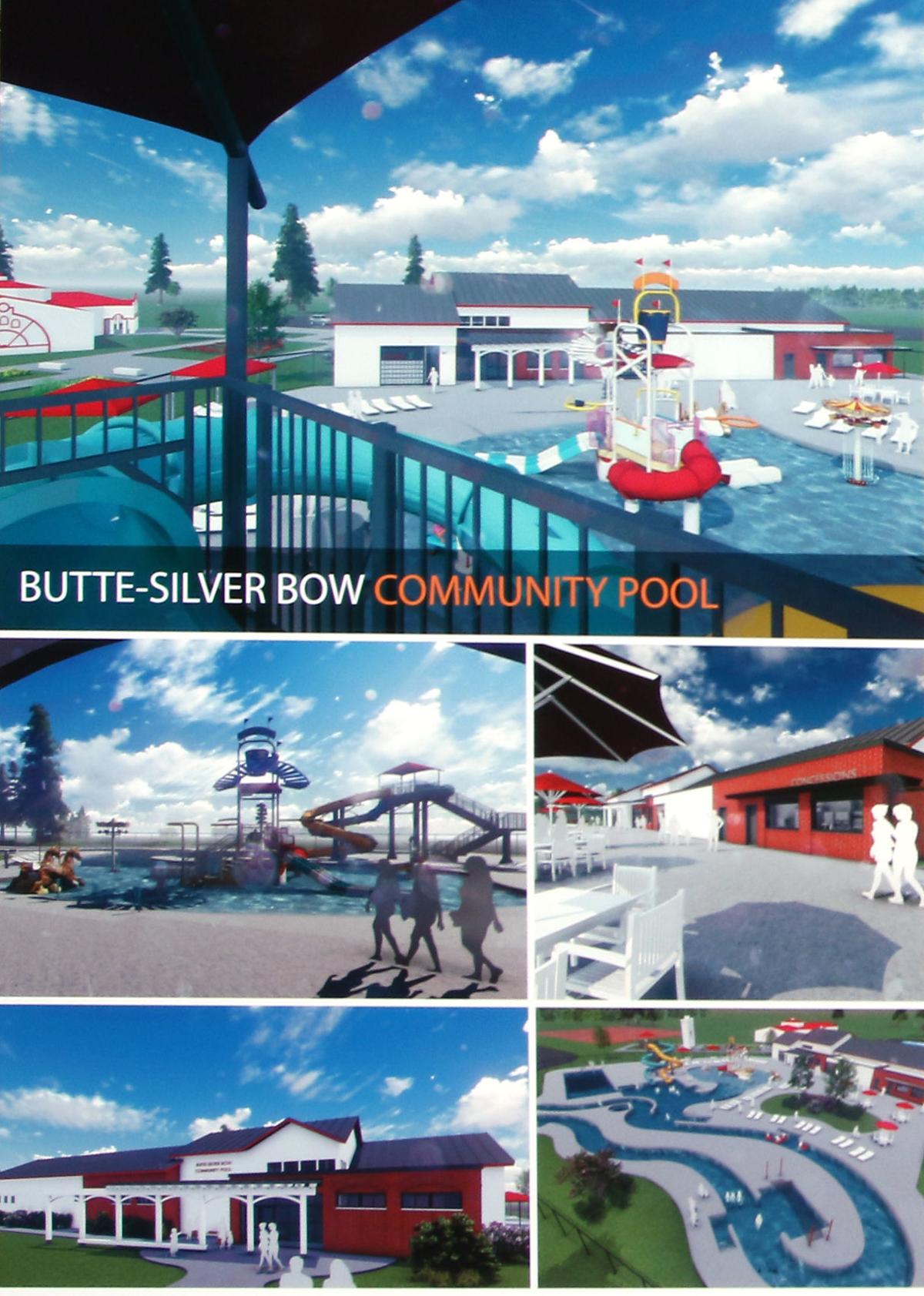 These renderings of Butte's coming waterpark were displayed at a ground-breaking ceremony in May. Commissioners could name the water complex in two weeks.

Ten years after Butte’s only public pool closed because of persistent, costly maintenance problems, dirt was turned Wednesday on bigger and better things to come.

“Instead, we are going to build this beautiful waterpark,” J.P. Gallagher, Butte-Silver Bow’s parks director, said at a ground-breaking ceremony for Butte’s $8.7 million pool and lazy river at Stodden Park.

A year and 20 days from now — May 31, 2018 to be exact — a waterpark with giant, twisting slides, hoops for aqua-basketball, play features for toddlers and other bells and whistles, will open to the public if things go as planned.

“I think this is the best thing that will happen in Butte this year,” said Dave Palmer, the county’s chief executive.

Officials thanked almost everyone who played a part in pushing, planning and financing the waterpark, including corporate donors such as Butte-based Town Pump.

It donated $500,000 to the project with a stipulation that another $1 million be raised through public and private funds to pay for the lazy river and other added amenities.

Most of the construction costs will be funded through a $7.2 million bond voters approved by a margin of 60 percent to 40 percent.

Not mentioned during Wednesday’s event were two people who were instrumental in setting the groundwork for a successful bond vote — former county Chief Executive Matt Vincent and former Parks Director E. Jay Ellington.

They made sure the process was not rushed and included lots of public input through surveys, forums and other means. So many residents wanted the lazy river and additional frills, Vincent and others felt confident the bond issue would pass.

The vote last June came nearly five years after residents narrowly rejected a $7.5 million bond issue to pay for a new pool and lazy river. That measure in September 2011 failed by 170 votes — 5,158 against and 4,988 in favor.

Bud Walker, one of several commissioners at Wednesday’s groundbreaking, said he never thought in 2006 that it would take more than a decade to get another public pool in Butte.

“We needed this,” Walker said. “Our kids needed this. It takes a while to convince people we need to do things differently.”

The waterpark will be built in the same area as the old pool, which was dug up and removed in recent months, leaving a giant pit just behind the area where shovels were used to turn dirt.

Just to the west is Butte’s new carousel, which is expected to open soon after 20 years of horse carving, fundraising and previous plans that fell through. Several longtime carousel backers were at the pool ceremony.

Gallagher said SMA Architects of Helena, which is overseeing the pool project with a staff that includes Jason Davis and others from Butte, has met every deadline and kept the project under budget. The primary builder is Butte-based Markovich Construction, which submitted the lowest bid.

Complete coverage: Just in time for summer, Butte's new $8.7 million water park is about to open

Three Montana contractors have submitted bids ranging from about $6.4 million to $7 million to construct Butte’s waterpark, including a pool, …

They’re two weeks later than usual, but all property tax bills in Butte-Silver Bow County have been mailed, and payments are due back Dec. 15.

Butte-Silver Bow Parks and Recreation Director J.P. Gallagher hosts the ground breaking of Butte's new swimming pool and waterpark Wednesday afternoon in Stodden Park. Around 50 people attended to hear city-county officials speak to the merits of the voter-approved project that should be completed in the summer of 2018.

These renderings of Butte's coming waterpark were displayed at a ground-breaking ceremony in May. Commissioners could name the water complex in two weeks.