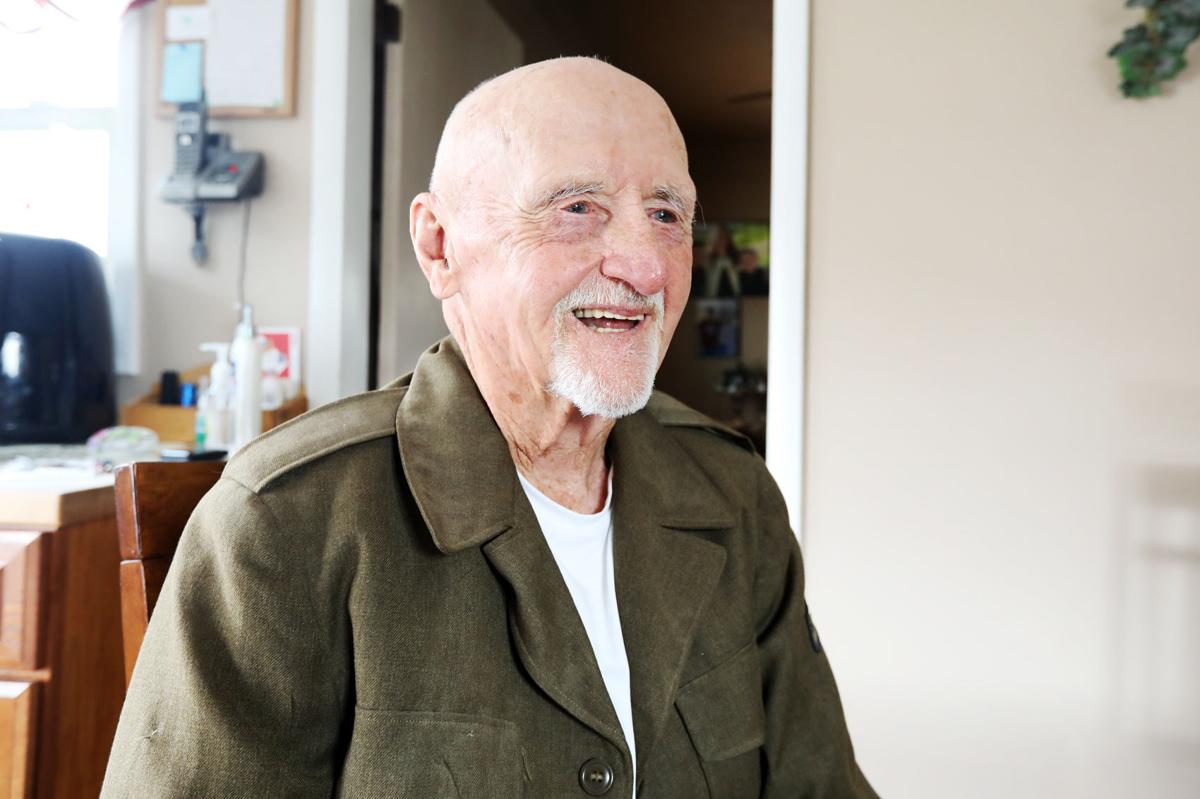 Will O'Neill served with the Army's Military Police in Korea: "If you were an MP, nobody liked you very much," he says with a grin. 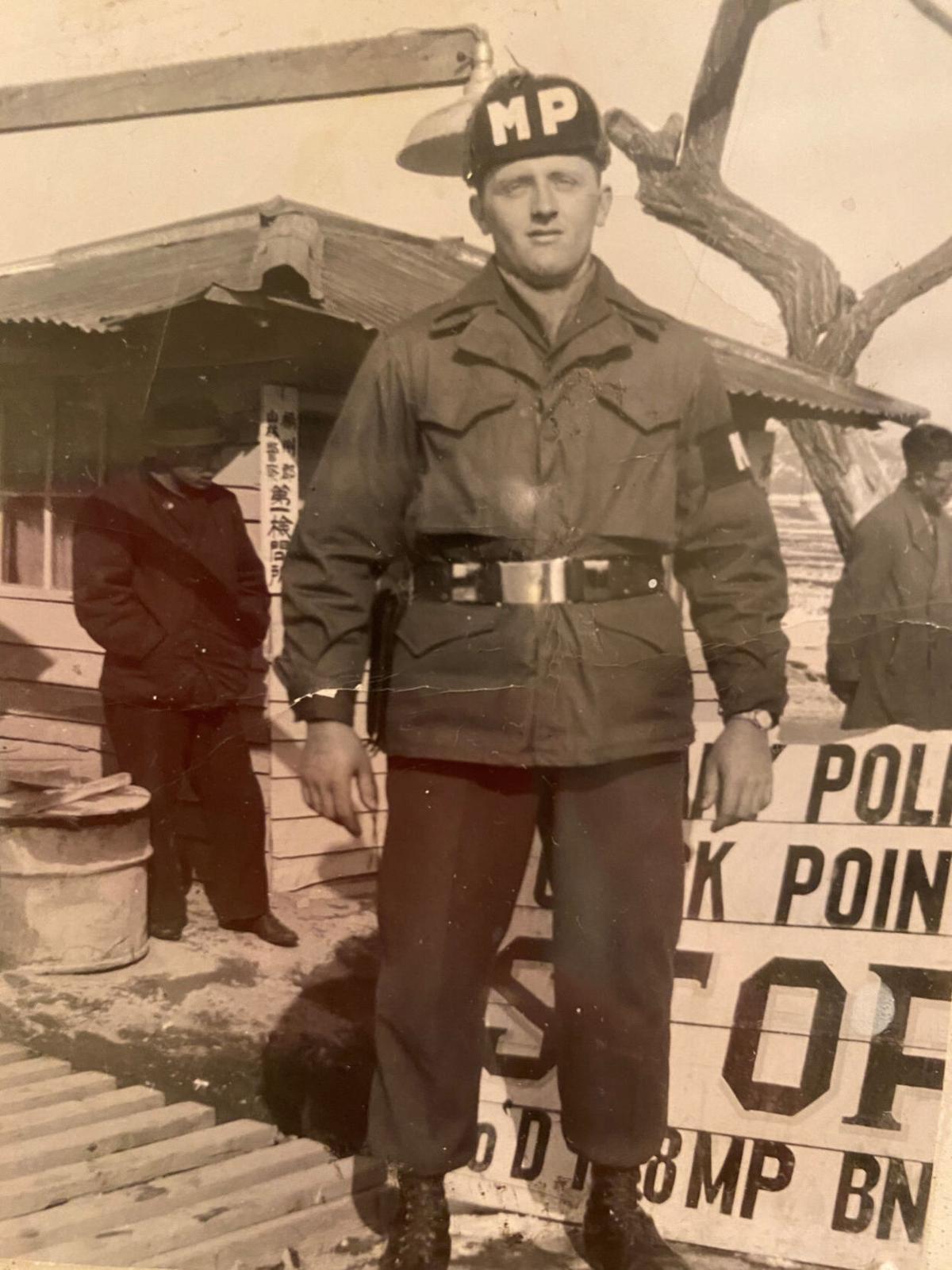 O'Neill during his time in Korea. 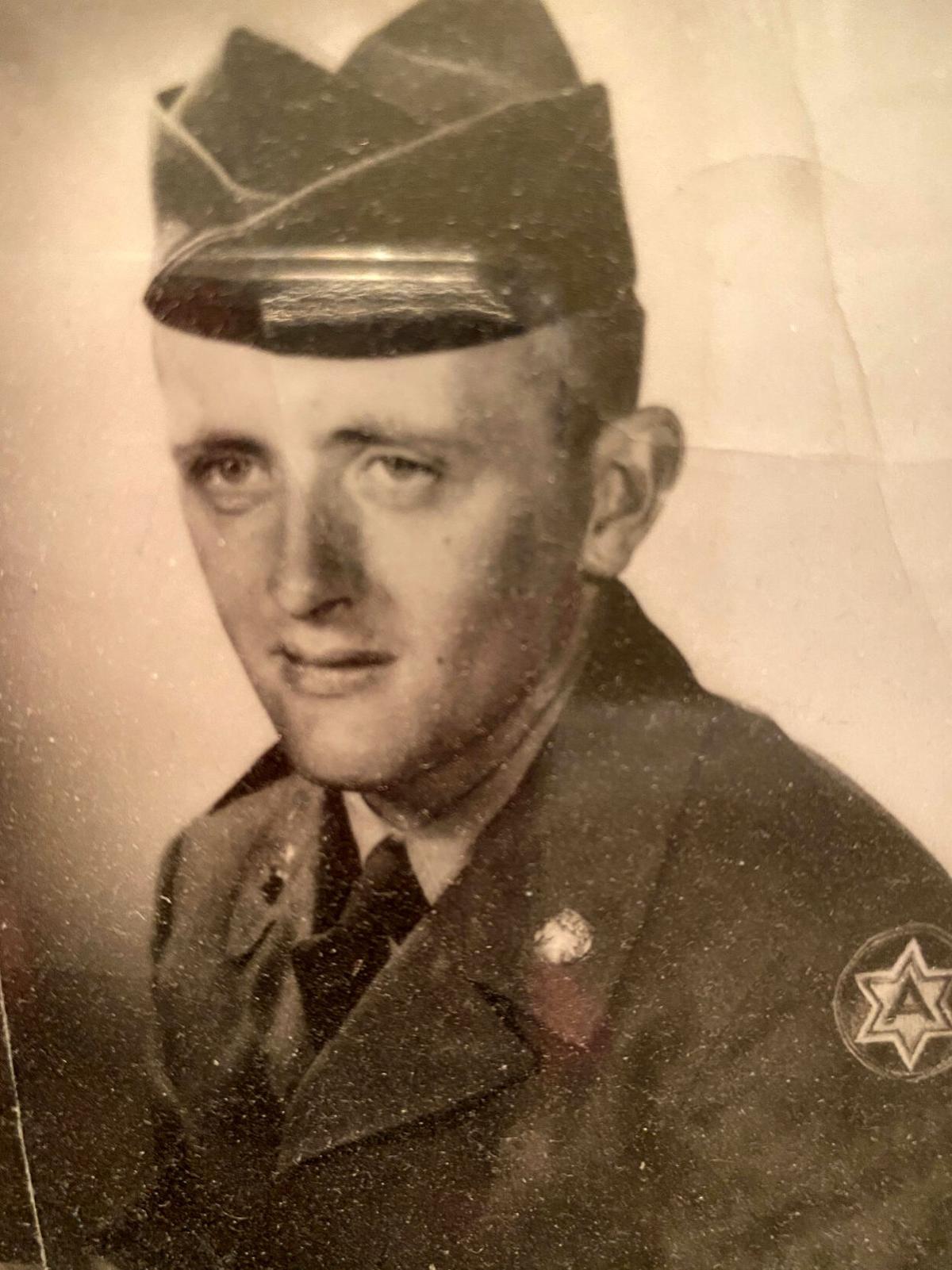 Will O'Neill's enlistment photo from his U.S. Army service 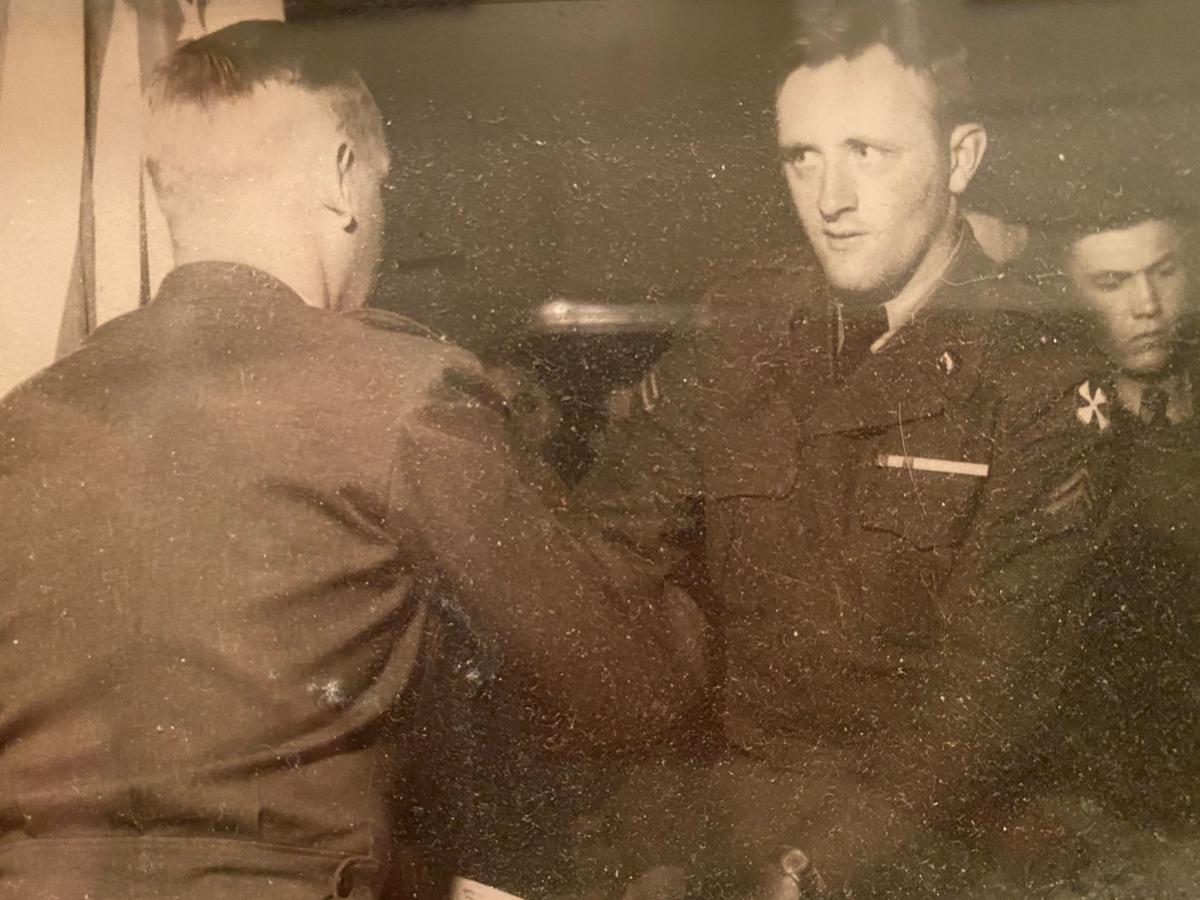 O'Neill is congratulated by an officer during his Korean service.

"When you're an MP," says Will O'Neill with a twinkle in his eye, "nobody likes you very much." O'Neill served as a military policeman in Korea.

O'Neill, 87, proudly states he's a fourth-generation member of the Walkerville O'Neill-Collins family, born "right there in the house" in Walkerville in 1933.

He remembers the day the Japanese attacked Pearl Harbor.

"I was in the Dream Theater in Walkerville," he said. "After the show we went to Hunter Drug and we heard about it.

"We were waiting for the Japanese planes to come over the Highlands."

Later, during the last couple years of the war, he delivered The Montana Standard.

"On V-J Day, they shorted me 20 papers," he said. "People were raising hell. They wanted that paper. They had to bring me some more."

He went to St. Lawrence and Sherman schools and then Boys Central, where he graduated in 1951.

O'Neill went right to work in the mines.

A hoist oiler, or apprentice hoist engineer, he worked in the Lexington, the High Ore, Anaconda and Kelly mines.

He and friend Ray Pesanti both volunteered for the Navy, but they were on a waiting list when they were drafted into the Army.

"I got drafted in May 1953," he said. "I asked, 'What about the Navy?' and they said, 'You've been drafted. You're going to the Army or you're going to prison.' And actually it was better, because it was a two-year hitch instead of four."

He went to Fort Lewis in Washington for basic training, joining a group of the Illinois National Guard who happened to be going through at that time.

"They would keep us up until 3 or 4 in the morning, and then we had to get up at 6," he said. "If a guy fell asleep, guys on either side were ordered to elbow him in the ribs."

From there he went to MP training at the Presidio in San Francisco and Fort Baker across the bay in Sausalito with the 505th Military Police Battalion. After two months of training, he was sent to Camp Stoneman in Pittsburg, California, where troops were staged for travel to Korea during the Korean War.

His trip to Korea was aboard the USS General John Pope, a massive troop transport ship that carried 5,000 men, sleeping in bunks stacked three high.

The ship was anchored at Sasebo Naval Base in Japan waiting for the final leg to Korea when some Navy types on a small launch decided to make fun of the Army soldiers. "We had hard-boiled eggs for breakfast," O'Neill remembers, "and about 90 percent of the troops lined up and threw eggs at that launch. We almost sank it."

From Pusan they were transferred to a troop train that took them to Seoul — "basically in boxcars," he remembers.

"We got processed there and I got assigned to 728th Military Police Battalion, Dog Company."

His company performed a wide variety of MP duties, including keeping order in an area with about 400,000 troops, which wasn't easy.

"There were three dance halls and a Marine division right near where we were," he said with a smile.

At one point, a nearby Army hospital had a celebrity patient — Syngman Rhee, the first president of South Korea. "We had to provide security for the hospital," he said. "They flew doctors in, and his family was there. That lasted two weeks."

His company also provided security for a huge gasoline pipeline between Inchon and Seoul. Koreans would often loosen couplings on the pipeline, and when the gas ran out, they would scoop it up in whatever they could carry. Once, he said, five Korean women had filled a creekbed with gasoline and it exploded from a cigarette, killing all of them.

He also was assigned to transport Chinese prisoners of war.

O'Neill did get one R&R trip to Tokyo.

"Tokyo itself wasn't hard hit in World War II and it was pretty nice," he said.

After his discharge, O'Neill came back to Butte, and back to the mines.

"I worked as a station tender at the Lexington and the Kelly," he said, before going to school at the University of Montana for three years.

He came back to Butte once again and worked at the Mountain Con, filling stopes with "slime," or tailings. He remembers one week when it was 40 below, washing out ore cars.

After that, seeking a little warmth, he went to Los Angeles, where he was hired as a mailman.

He remembers delivering mail on Montrose Avenue on Nov. 22, 1963, when he found John F. Kennedy had been shot. He was devastated.

"John Kennedy was a hero to all Irish Catholics," he said. "I went back to the post office and some people were celebrating Kennedy being shot. I quit two weeks later and came back to Walkerville."

In 1966, he married Janet Tamietti, and they've been married 54 years.

"It took me quite a while to find a woman who would put up with me," he said, his grin making another appearance.

Janet, nearby, nodded in agreement.

He worked as a motorman at the Lexington, then when the mines closed, he became a guard at the Montana State Prison, retiring after 22 years' service there.

The O'Neills' daughter Jacqueline lives in Nevada, but son Jim, curriculum director for Butte School District #1, is close to home. They have five grandchildren.

"One of my granddaughters in Nevada is a mining engineer," Will O'Neill of the Walkerville O'Neills said with pride.

Editor's note: A correction has been made to this text to reflect that Will O'Neill's daughter's name is Jacqueline.

Butte man arrested for felony assault with a weapon

Late Saturday morning, officers were dispatched to the 3000 block of Mammoth Drive on a report of shots being fired.

Markovich on big subdivision: 'We are hoping to break ground in April'

After numerous obstacles and delays, construction on Copper Fox Estates —the biggest housing addition in Butte in a decade — could begin in a …

Hundreds of people 80 and older have signed up for a Phase 1B COVID-19 mass vaccination clinic offered from 9 a.m. to 3 p.m. Wednesday in the …

A Butte mental health counselor is trying to withdraw her guilty pleas to two felony counts of Medicaid fraud, saying she was emotionally frag…

The next COVID-19 Phase 1B vaccination clinic scheduled for Wednesday, Jan. 27, at the Butte Civic Center is being scaled back due to low vacc…

Will O'Neill served with the Army's Military Police in Korea: "If you were an MP, nobody liked you very much," he says with a grin.

O'Neill during his time in Korea.

Will O'Neill's enlistment photo from his U.S. Army service

O'Neill is congratulated by an officer during his Korean service.