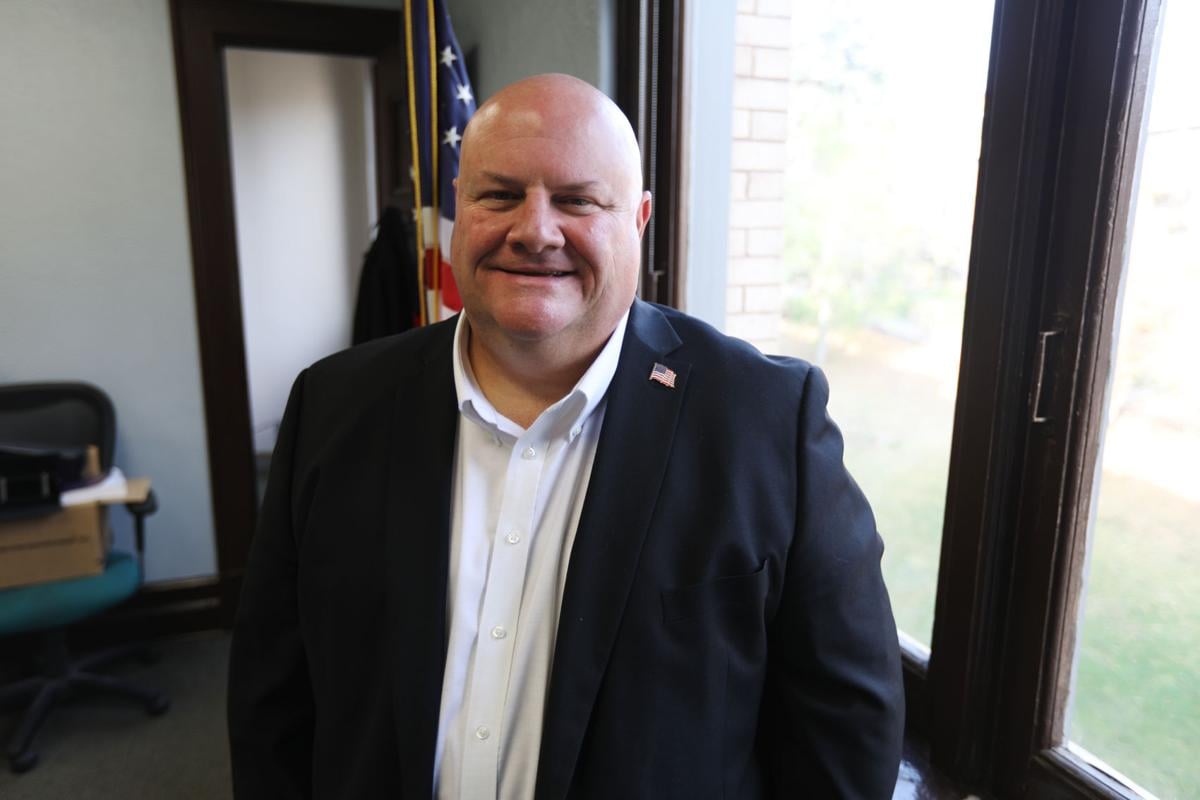 Jerome McCarthy is photographed in his office at the Butte Silver Bow County Courthouse where he works as a justice of the peace. 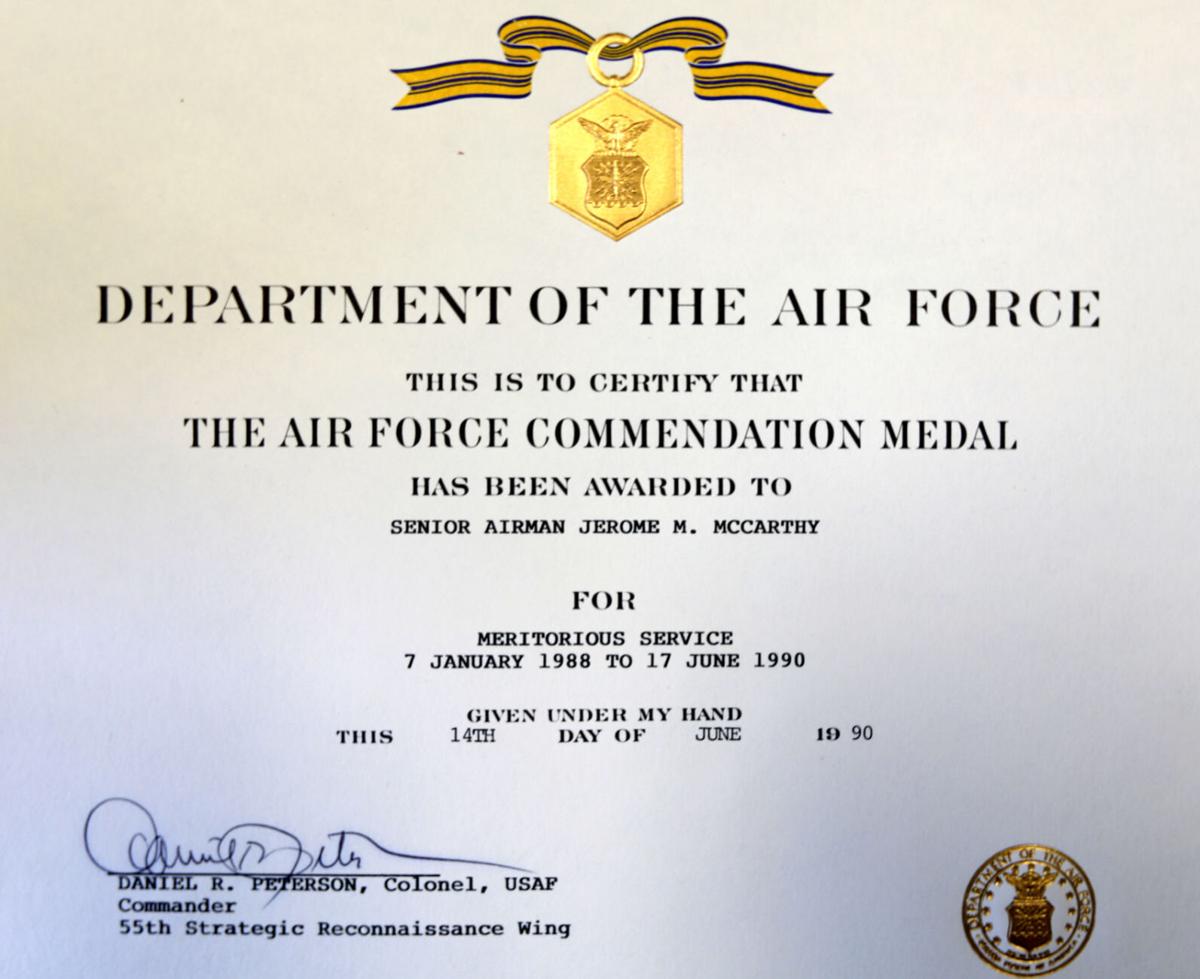 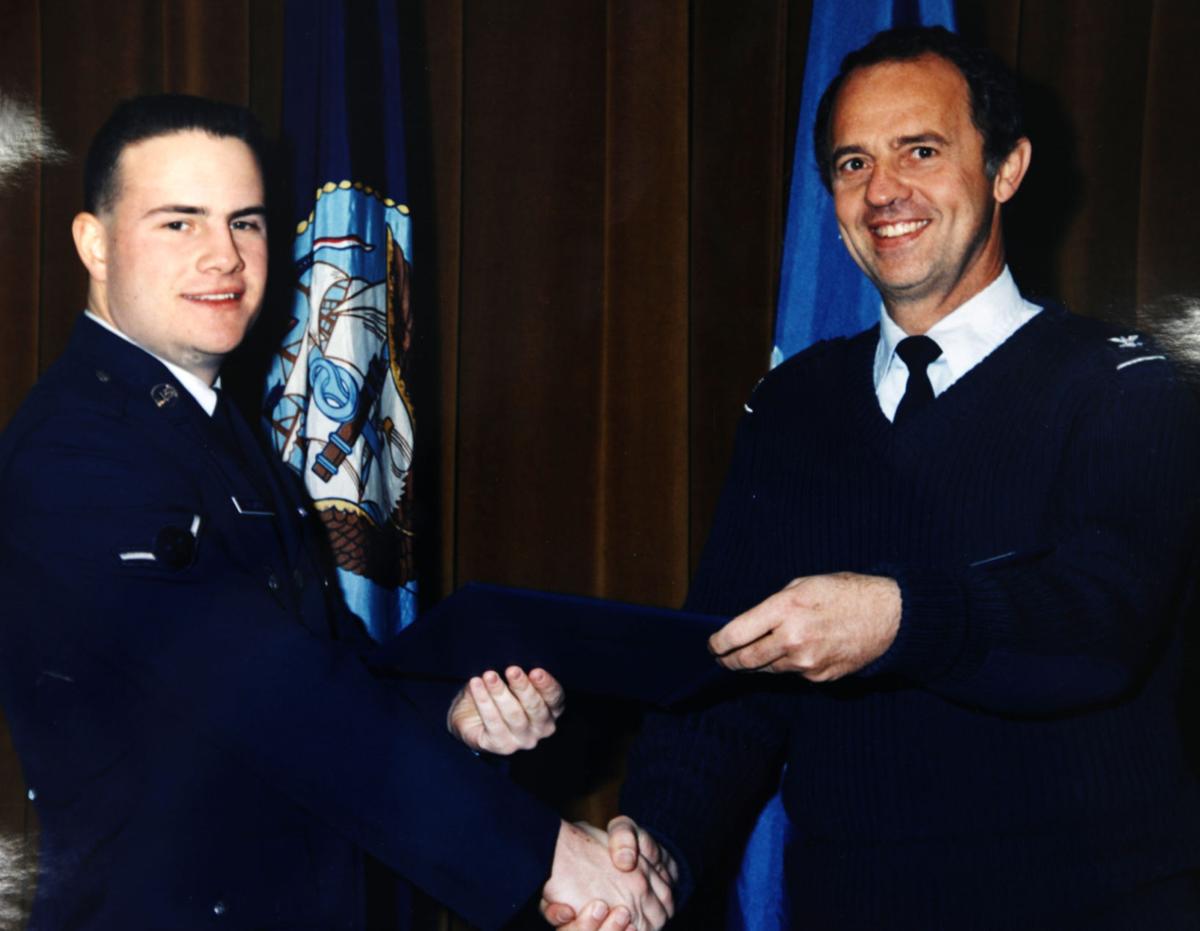 McCarthy, left, being congratulated by a colonel during his Air Force hitch.

There are folks who join the military, hate it, and get out as soon as possible.

There are those who like it so much, they put in 20 years or more or even serve until retirement.

Then there are guys like Jerome McCarthy, who loved the Air Force but returned to Butte after four years because his mother, Loretta, had multiple sclerosis and his dad, longtime Butte county attorney Bob McCarthy, could use help caring for her.

“I was glad I came home and spent that time,” said McCarthy, who spent 27 years in law enforcement after his service before he became Butte City Judge in 2018. “I don’t regret that decision at all, particularly after the career I was able to have.”

At the same time, he would have been content staying in.

“I felt like I was in a really good position,” said McCarthy, now 52. “I was feeling successful and just really enjoyed what I was doing.”

McCarthy graduated from Butte Central High School in 1986, and although he went to Montana Tech for a semester on an academic scholarship, he really wanted to try out the Navy or the Air Force. He hit it off with an Air Force recruiter in Butte so he joined.

On his ship out date of Dec. 18, 1986, a snow storm stranded him in Butte along with two others who had joined the Air Force and one heading to the Navy. They were officially in the military now, but with no flights out, they were “assigned” to the Copper King Inn.

“They won’t let us go home because we were now active duty,” McCarthy said with a wide grin. “So we’re in the hotel and they are feeding us — you know, the whole thing.”

When they finally flew out days later and McCarthy and the other Air Force guys arrived at Lackland Air Force Base outside of San Antonio, Texas, the year’s last basic-training session had started and the next one didn’t begin until early January.

So, in limbo, they were placed in a dormitory with people who had been removed from basic training due to any number of issues — criminal, medical, mental health — and were waiting to receive a general discharge.

They weren’t exactly talking the Air Force up.

“They said, ‘This is the stupidest decision you could have made, the Air Force is just a bunch of wimps,’” McCarthy recalls.

McCarthy was undeterred, even though he and the other new recruits were put to work with daily KP and cleaning chores until the next basic training regimen began in January.

After eight weeks of basic training, where he got in better shape and the “disciplinary structure started,” he was assigned to Sheppard Air Force Base in Wichita Falls, Texas, where he found a niche in the medical side of the service.

He worked in the hospital medical lab there, doing blood and urinalysis testing, among other things, and was given an opportunity for months of training as a lab technician.

When he completed that, he got additional coursework and training in pathology lab work at the Armed Forces Institute of Pathology at Walter Reed Medical Center in Washington, D.C. Pathology includes the diagnosis of disease through tissue, cell and fluid samples.

McCarthy was then sent to Offut Air Force Base in Omaha, Nebraska, home of the U.S. Strategic Air Command, where he applied his expertise at a lab in a large hospital there.

It served active-duty and retired Air Force personnel and did histopathology lab work and analysis for men and women stationed at numerous bases in Montana, Idaho, Wyoming and the Dakotas.

McCarthy and other lab technicians prepared tissues taken during surgeries, examined specimens under microscopes (histopathology) to reveal specific features doctors use to diagnose disease, and assisted in autopsies, among other things.

“When I got out, I was actually in charge of the lab there in Nebraska,” he said.

The technical name for that was “senior histology technician,” and McCarthy liked and excelled at the job so much and helped improve quality and timeliness at the lab, he was awarded an Air Force Commendation Medal for it.

McCarthy returned to Butte in 1990 but was still on inactive reserve status, and after just two months, he was called up and sent to Keesler Air Force Base in Biloxi, Mississippi in support of Desert Storm, the U.S. and coalition combat operations to oust Iraq from Kuwait.

After several months there, he returned to Butte again and in 1991 began a long career in law enforcement, first as a detention officer, then a police officer and later detective.

Commissioners appointed him as city judge when Glen Granger stepped down in the middle of his term in 2018 and McCarthy is on the November election ballot unopposed for a full, four-year term.

McCarthy liked the structure and rules and discipline that came with military life and that gave him a foundation that has served him well.

“It definitely rubbed off,” he said. “I’m just really one for structure and striving to make things better and more efficient, if you will, and I think I got that from the military.”

McCarthy is still a military backer today, and along with District Judge Robert Whelan, is establishing a court geared specifically to helping military veterans who have run afoul of the law address substance abuse, mental health issues and other problems.

If they get notification from the U.S. Veterans Administration as expected soon, Butte would join Missoula, Billings, Bozeman and Great Falls as having a veterans treatment court. The one here would be the first to have a misdemeanor and a District Court judge partnering together.

Because of their military experiences, particularly combat, many veterans suffer from mental health problems and many are addicted to drugs or alcohol or both. Many struggle with family and housing issues, too, and any or all those things can lead them to commit crimes.

Those who do can be steered to veterans treatment courts where available and get immediate help from mentors, professional counselors and others, even while their cases are still pending.

“I’m looking at these guys and I’m thinking, man, you know, they served their country,” McCarthy said. “They really sacrificed a lot. Can I do something about this in a position I’m in?”

McCarthy and his wife, Darla, have been married 24 years and have three children.

During a robbery late Friday afternoon at Thomas Family Apparel, a stun device was used on the victim, who was working down in the lower level…

Jenica Held has been named retail branch manager of Opportunity Bank of Montana’s Butte location. She is responsible for managing the branch r…

Jerome McCarthy is photographed in his office at the Butte Silver Bow County Courthouse where he works as a justice of the peace.

McCarthy, left, being congratulated by a colonel during his Air Force hitch.