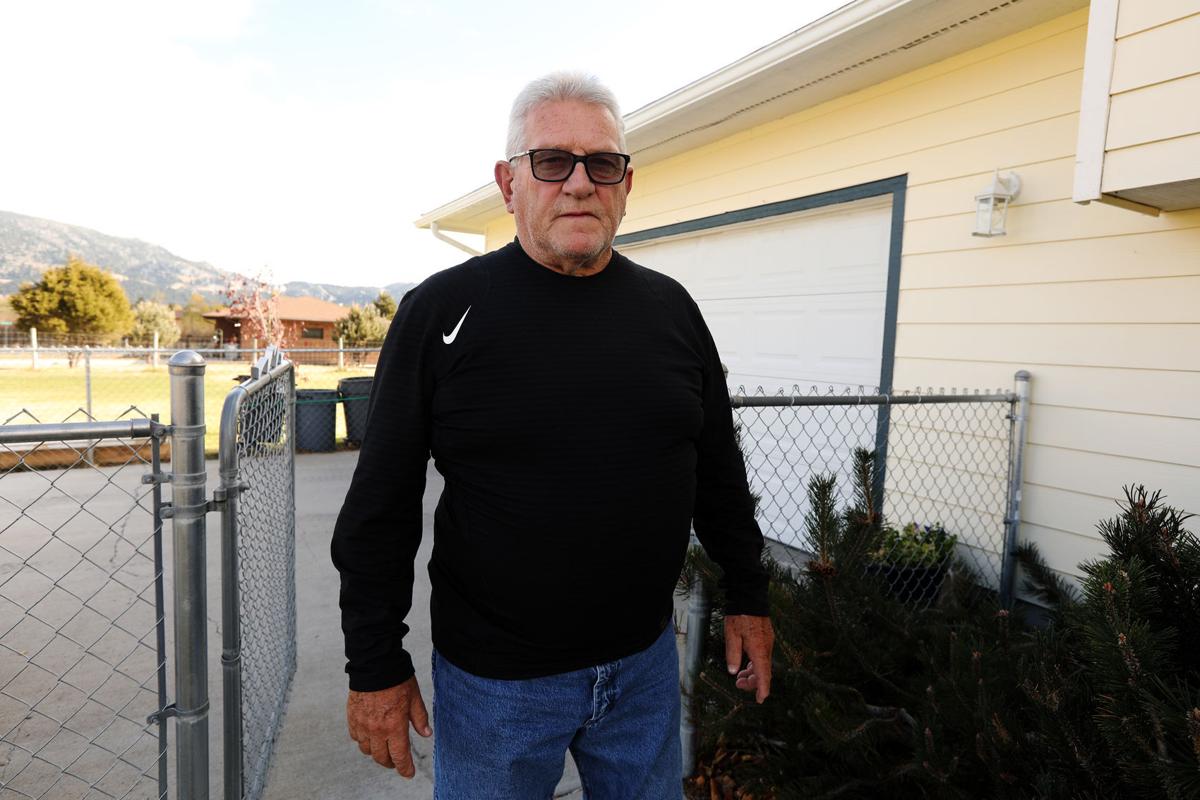 Vietnam War veteran Lenny Rundle is photographed in front of his home in Butte. 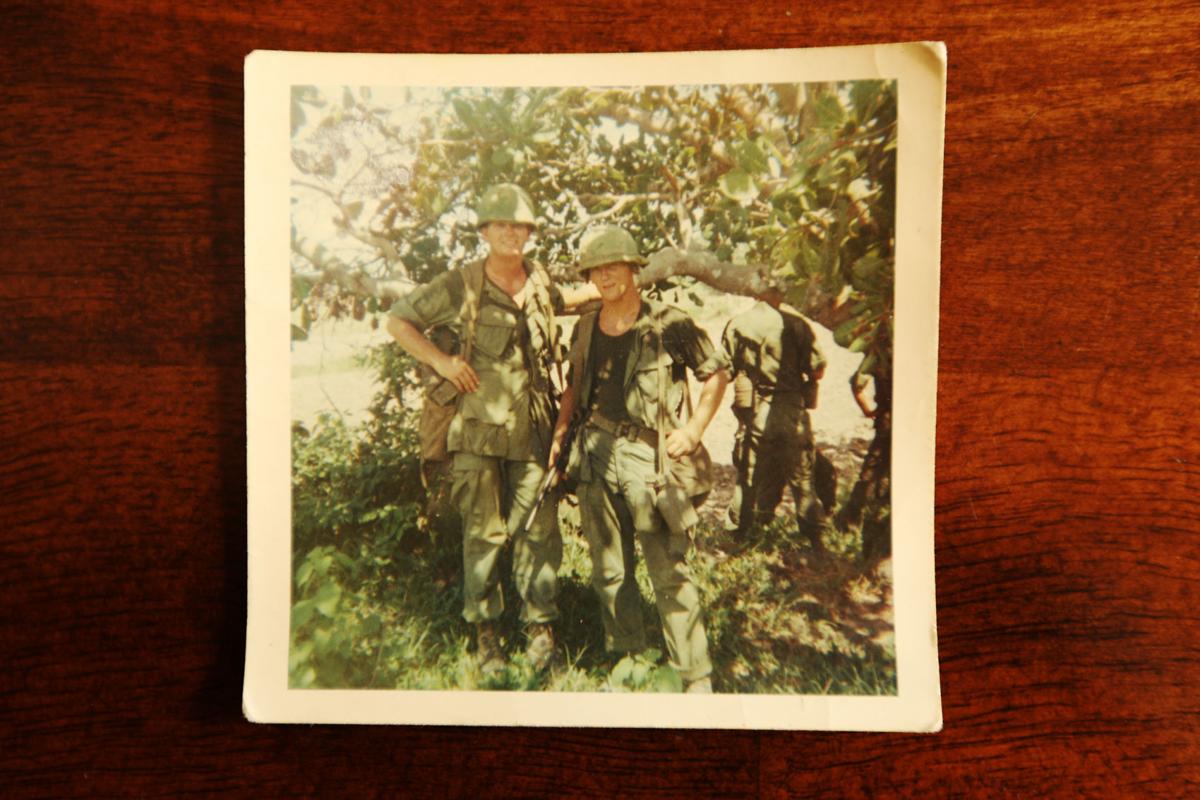 Vietnam War veteran Lenny Rundle, left, is photographed with a fellow soldier during the war. Rundle said the image was used in the Stars and Stripes newspaper. 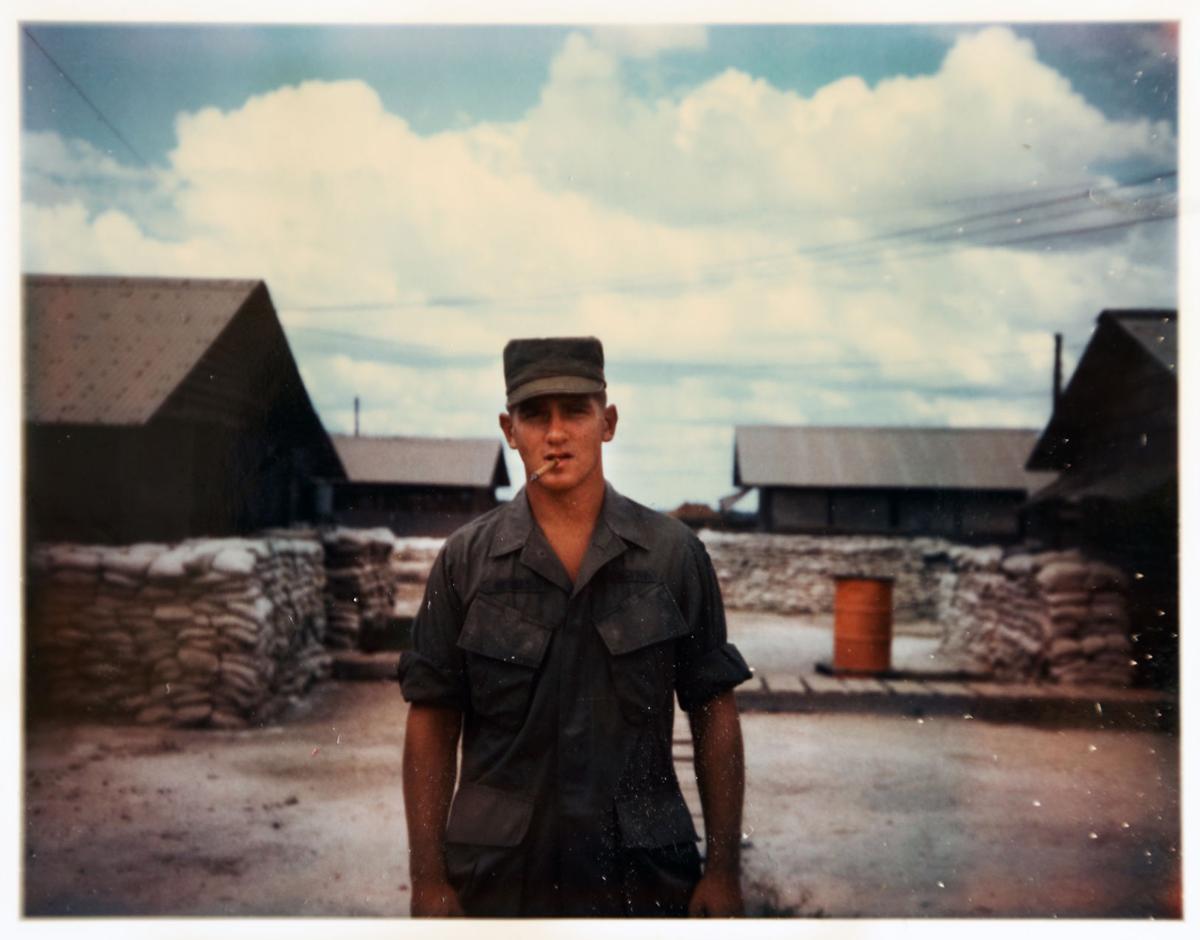 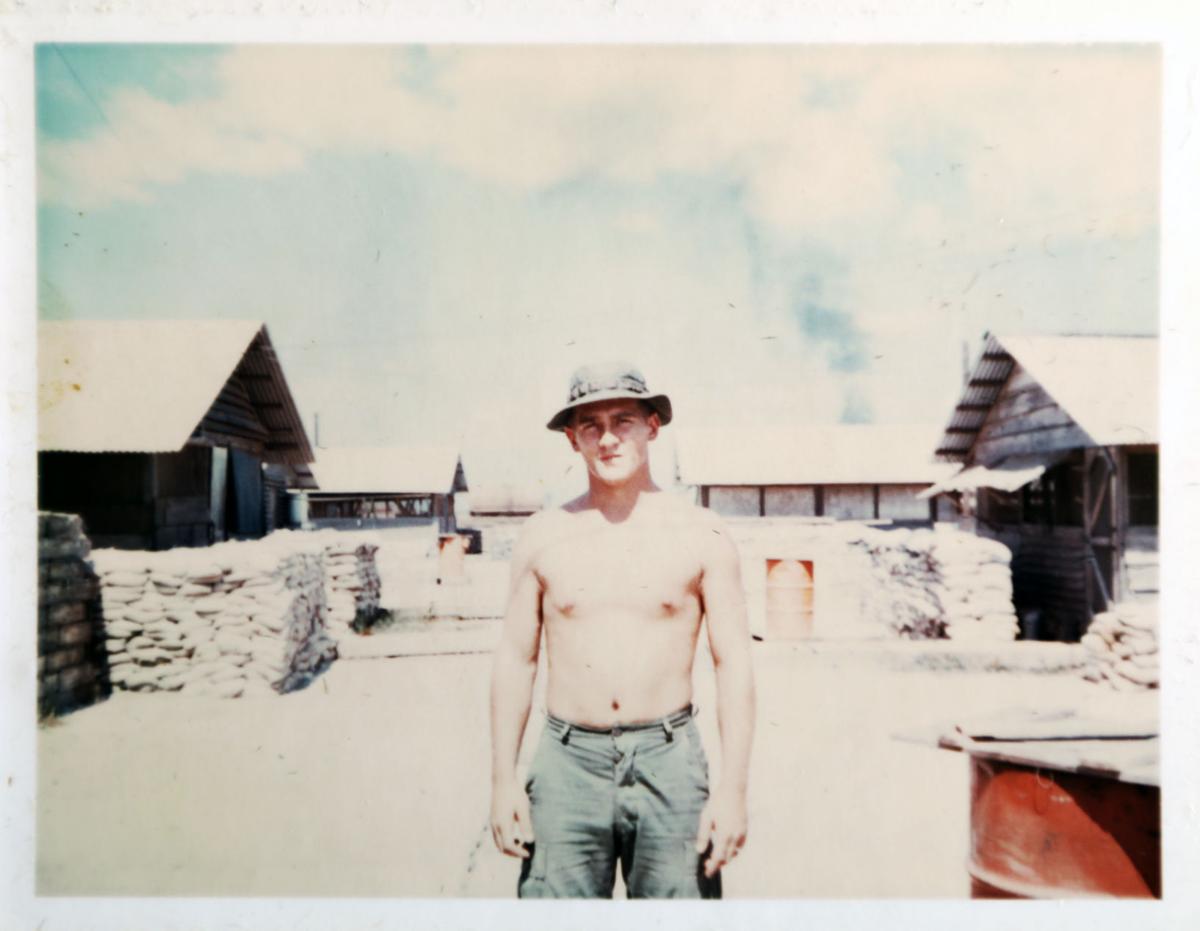 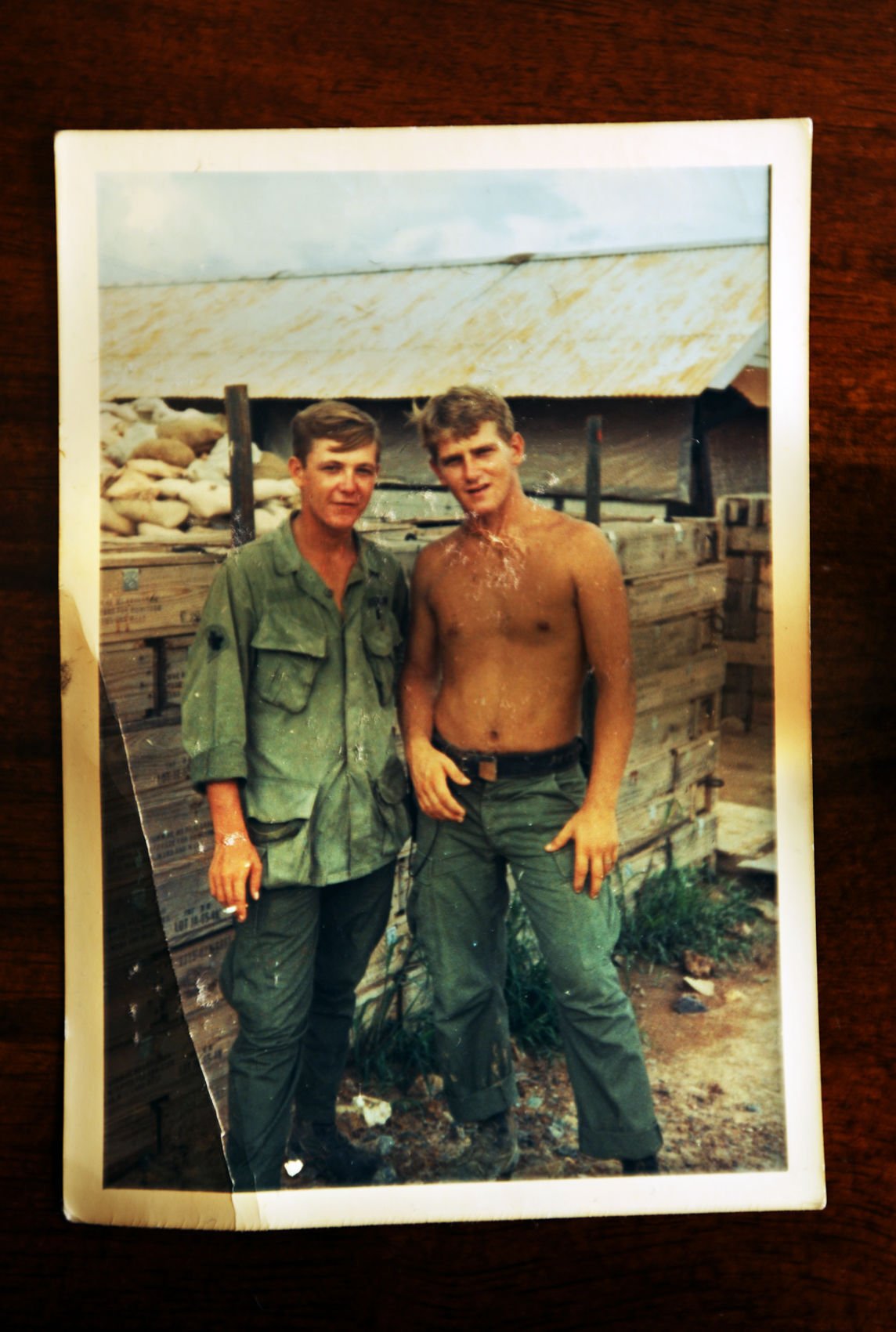 Lenny Rundle, left, is pictured in an old photograph with a fellow soldier during their service in the Vietnam War. 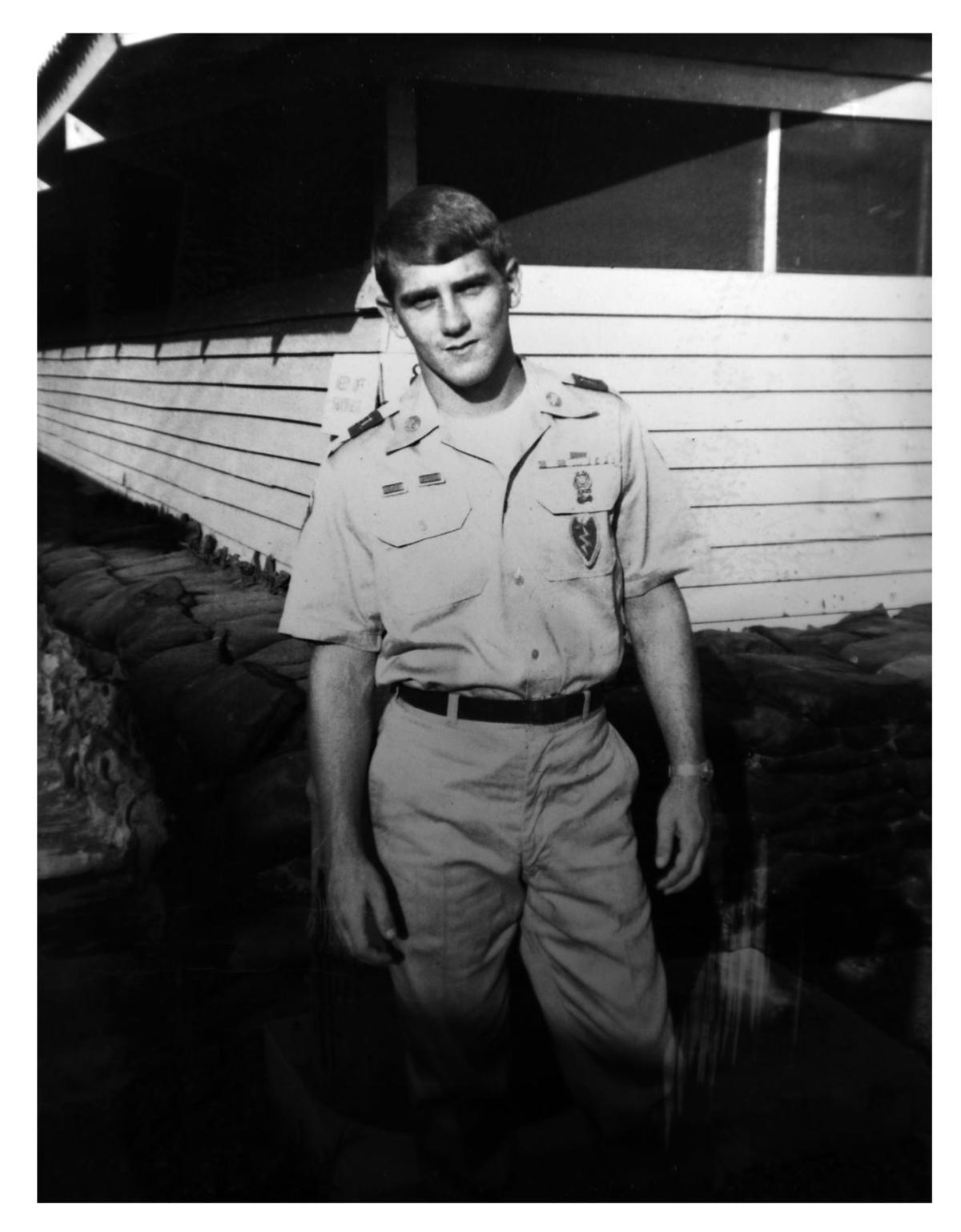 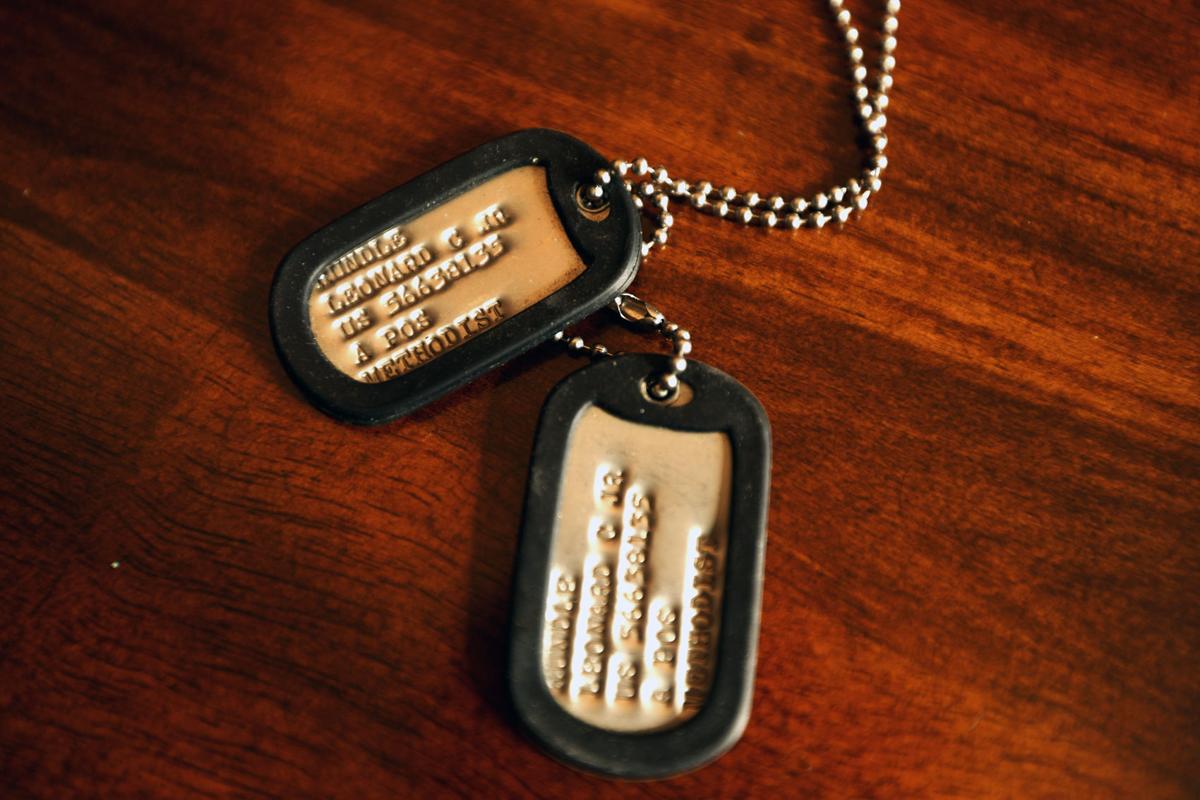 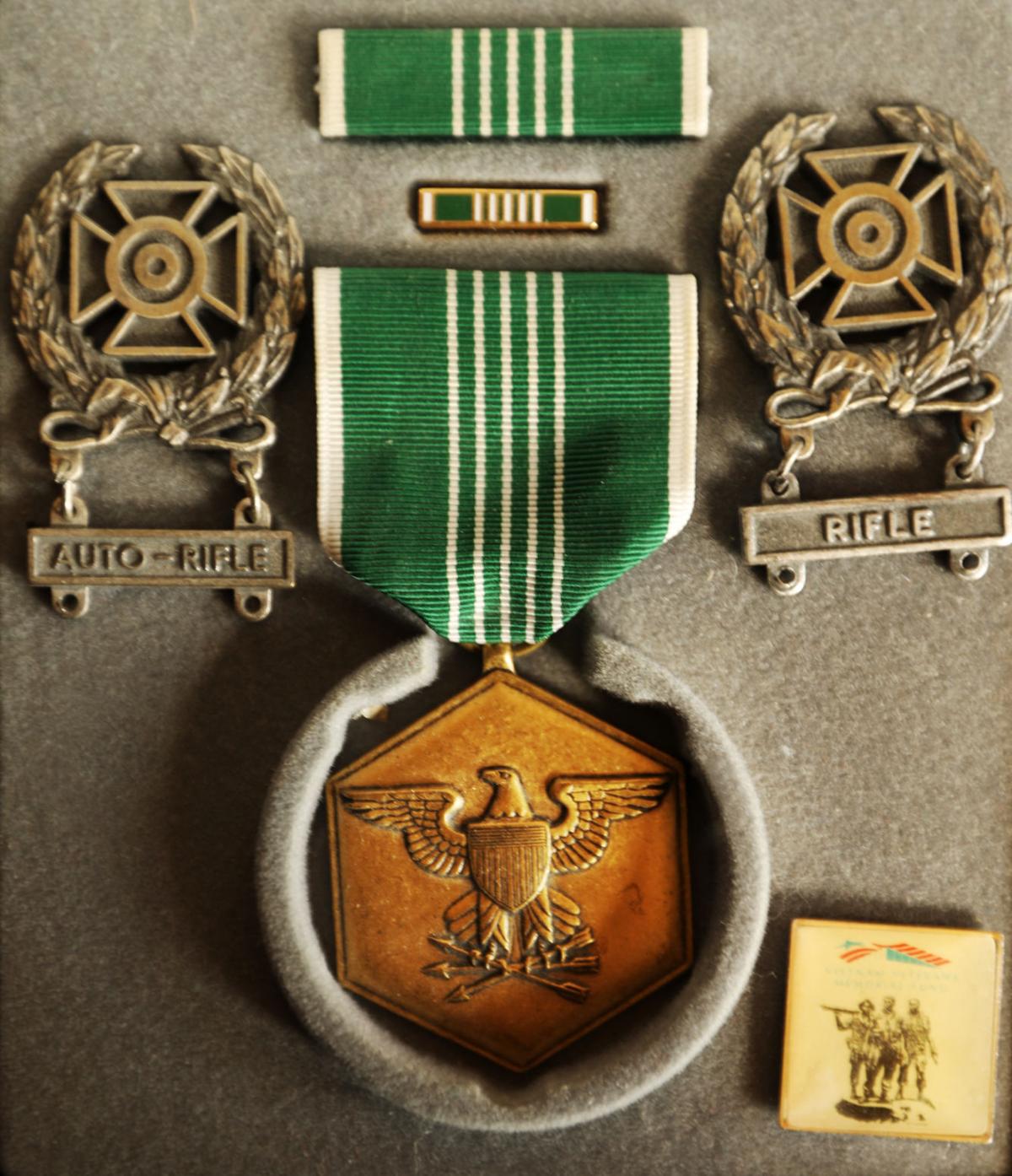 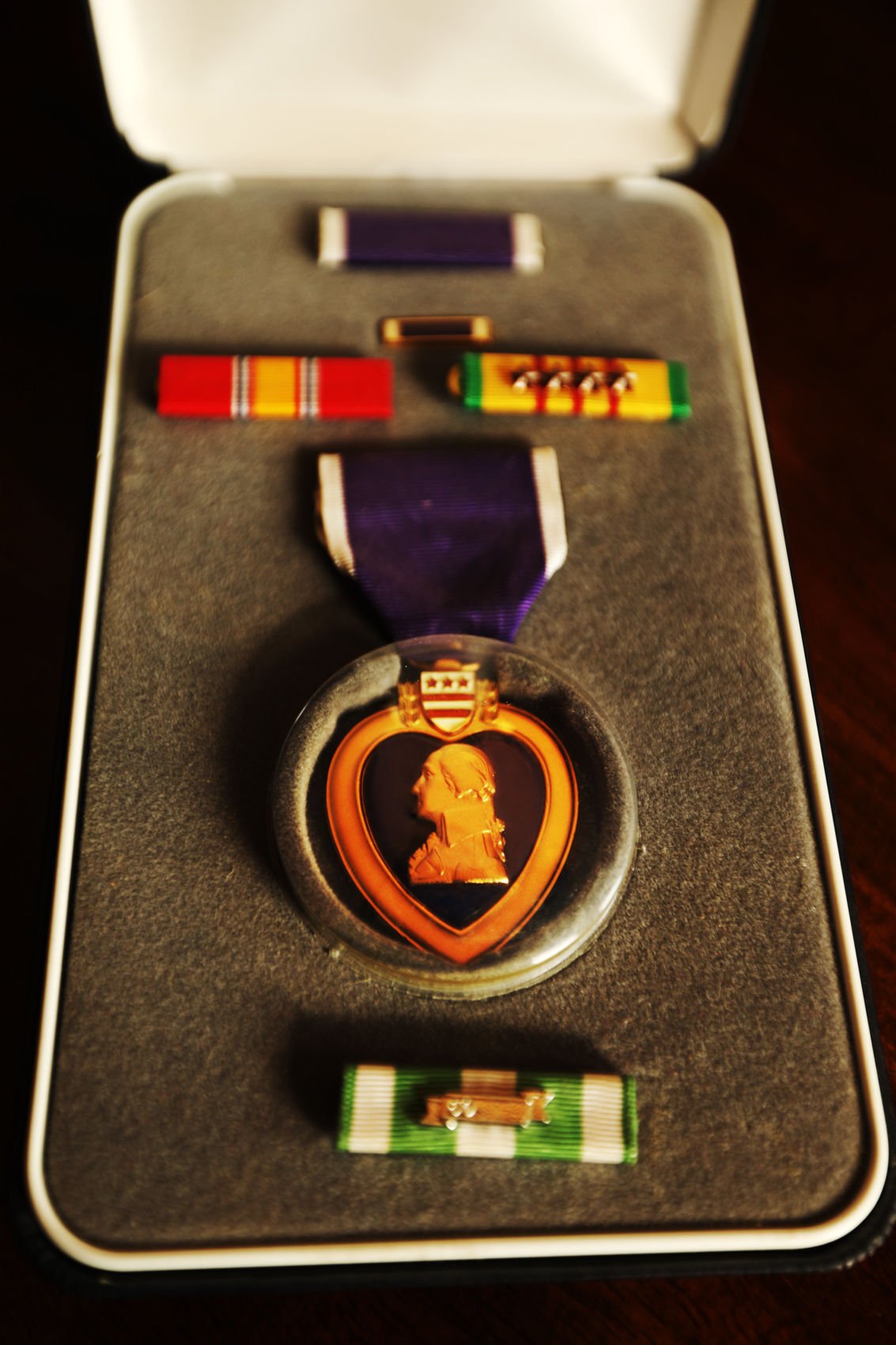 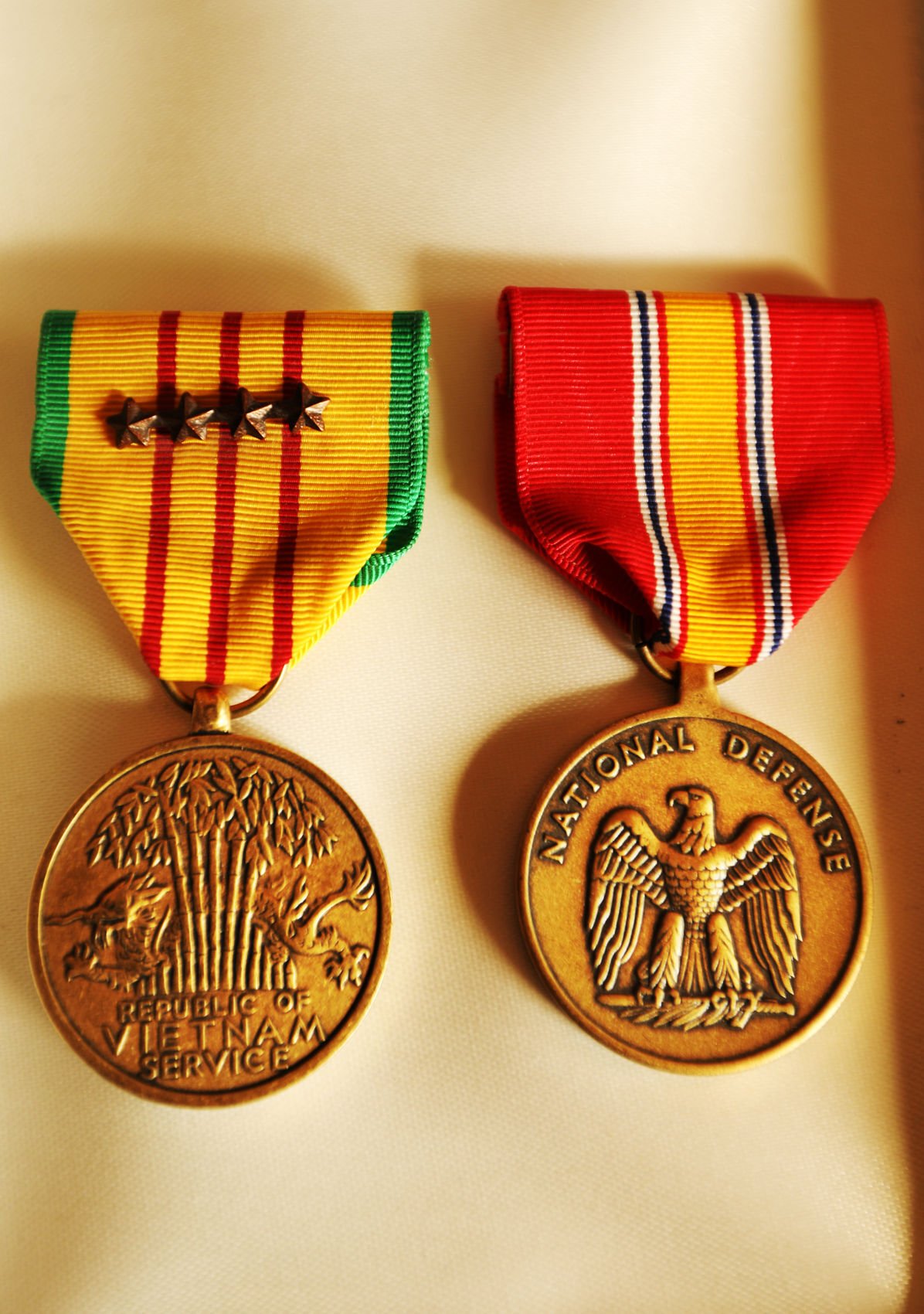 In the midst of talking about the hectic, harrowing days he spent in the jungles and enemy tunnels during the Vietnam War, Leonard Rundle took an abrupt pause.

“Could you put this one thing in the article?” he asked suddenly, as if he might forget to mention it later. “I love Butte and I love the people here, and we’re gonna make it through this pandemic.

“It’s been tough for a lot of people but they’re gonna make it. Butte is tough. Butte tough.”

He never said so himself during an hour-long interview about his time in Vietnam — things he’s been reluctant to talk about much over the years — but Lenny Rundle knows what tough is.

He spent part of 1968 and most of 1969 in Vietnam, mostly on search-and-destroy missions, and during many of those, he combed through the dark, wet web of underground tunnels, setting and detonating explosives.

The enemy used the tunnels to eat, sleep, heal and hide so they could go out and kill more Americans. So once Rundle and others determined that none of their guys were down there, they blew the tunnels and everything inside them to smithereens. Food, weapons, supplies — whatever.

“We tried to get rid of everything that could hurt our guys," said Rundle, now 73.

It was a dangerous and surreal time a world away from the country he grew up in and made it back to — an America that many today take for granted.

“Right now we’re going through this pandemic, and it’s tough,” he said. “But maybe some of these people will start realizing we have a pretty good country we live in, you know?”

Rundle was born in Butte, one of six children to his father, Lefty Rundle, and mother, Helen. His father was a star baseball pitcher in the Pioneer League and later an iron worker for the Anaconda Company.

After Lenny Rundle’s freshman year of high school, the family moved to Wilmington, California, where his father worked on bridges. Lenny graduated high school there and attended college for two years before his father was killed in a work accident. He was only 42.

The family moved back to Montana and in 1967, Lenny Rundle was drafted into the Army. They sent him to demolition school at Fort Leonard Wood, Missouri, and then to Vietnam.

He was only there a few weeks and because he was so good with explosives, the Marines snatched him up for search-and-destroy missions.

“I was really good at demolition. I’m not bragging,” Rundle said, holding his hands spread apart to make the point. “I just was. People used to tell me I could blow a fly off a cow’s butt and leave the cow standing.”

The missions took Rundle to all parts of Vietnam, including places around Cambodia where the enemy funneled in men and supplies with little fear of an all-out U.S. ground invasion.

He spent several weeks going up and down the Mekong Delta by boat, finding narrow parts of water to build bridges so personnel carriers could get across.

“We would build them during the day and they (enemy fighters) would come in at night and try to mine them,” Rundle said. He was in a carrier himself when he took shrapnel from an exploding mine.

The enemy, be it soldiers with the North Vietnamese Army or the communist guerilla Vietcong, were tenacious.

When many of them weren’t fighting, they were underground.

“They had 30 years to build these tunnels and they were all over the place,” Rundle said.

The entrances were usually hidden in bushes and trees and after descending for a distance, the tunnels came up and leveled off. There were stacked “beds” cut into the dirt and areas that served as make-shift hospitals.

The enemy lit the tunnels with lanterns, Rundle said, but they were usually dark when he was in them and you had to crawl through some sections.

“Most of them probably had a foot or a foot-and-a-half of water,” Rundle said. “You had a lot of water and a lot of spiders and a lot of snakes, but you get used to that.”

The enemy fled when Americans snuffed out their locations, sometimes with little time to spare, leaving pots that were still hot.

“I can honestly say that I never saw any live ones (enemy) down there,” Rundle said. “I did find dead bodies and a lot of blood and bandages.”

He placed C-4s, plastic explosives with clay-like textures so they could be molded and placed with precision, at specific locations and used blasting caps to detonate then.

They went into the tunnels to make sure there weren’t American captives or civilians below, and it took serious explosives, not just grenades, to completely destroy them.

The missions also meant frequent firefights, when you can hear bullets whizzing past your ears and see the tracers with every fourth round.

The worst week of Rundle’s time in Vietnam came in May 1968 after the Vietcong had overrun a company of Marines atop Nui Ba Den, or Black Virgin Mountain, where the U.S. had staged a strategic camp.

More than 20 Marines were killed and after the Vietcong were driven from the top, Rundle was among those sent back in as the fighting continued.

“I spent a week of torture up there because you just can’t sleep,” he said. “They hit us every night for seven nights.”

During a firefight elsewhere, a fellow Marine stepped on a landmine that took off his legs and Rundle and another man grabbed him by his pack and pulled him to safety until a helicopter arrived to whisk him off. The Marine survived and Rundle was awarded the Silver Star, one of many medals and commendations, including two Purple Hearts, he received.

But he knew a lot of great guys who didn’t make it.

One was a “hard core” Marine captain he called "Smokin' Joe" who was killed when his helicopter was shot down. Another was Ronnie McKnight, an African American who was one of Rundle’s closest buddies.

He was killed in a firefight while Rundle was in Hawaii for a week of “R and R.”

“I don’t think I ever got over that,” he said. “To this day it still sticks with me.”

There was one Marine, “just a different guy,” Rundle said, who just walked into the jungle one night and was never seen again.

Rundle returned home in late 1969, his military service completed, and he has lived in Montana since. He met his wife, Laura Jo, while bouncing at Thatcher’s Hatch bar in Butte and they married in 1976. They have two grown children — Matthew and Jessica — and a grandson, all living in Butte.

Rundle has done many things over the years. He was a guard at Montana State Prison for 12 years, worked for the Postal Service and has been with CCCS and its prerelease center in Butte for 20 years. He has coached high school basketball and football in Deer Lodge and Butte, too.

To this day, because of the tunnels, he doesn’t like going in closets and feels confined in bathrooms, too. And he feels for soldiers who have fought anywhere.

As tough as it was in Vietnam, Rundle is glad he served his country. But he doesn’t feel special.

“People say, ‘I don’t know how you made it through that. I couldn’t have done that,’” Rundle said. “I say, ‘Yes you could have. You see people around you that depend on you.’

"When you see those tracers and you see people around you dying, you say to yourself, 'You've got to live.' What's that saying — get busy living or get busy dying? Well, that’s right, so you get busy living."

A former Butte-Silver Bow police detective says she was harassed, singled out and verbally abused on the job because of her gender and was fir…

A former Butte-Silver Bow police detective says she was harassed, singled out and verbally abused on the job because of her gender and was fir…

At a special meeting of the Butte School District No. 1 School Board on Tuesday, the board unanimously decided to continue with in-school lear…

Nineteenth-century author Robert Louis Stevenson defined a successful man as someone who has “lived well, laughed often, and loved much; who h…

After backlash, B-SB reviewing all rules and regs on signs

Following a burst of public backlash and harsh criticisms that a local board seemed to have subsequently quelled, Butte-Silver Bow is taking a…

Vietnam War veteran Lenny Rundle is photographed in front of his home in Butte.

Vietnam War veteran Lenny Rundle, left, is photographed with a fellow soldier during the war. Rundle said the image was used in the Stars and Stripes newspaper.

Lenny Rundle, left, is pictured in an old photograph with a fellow soldier during their service in the Vietnam War.