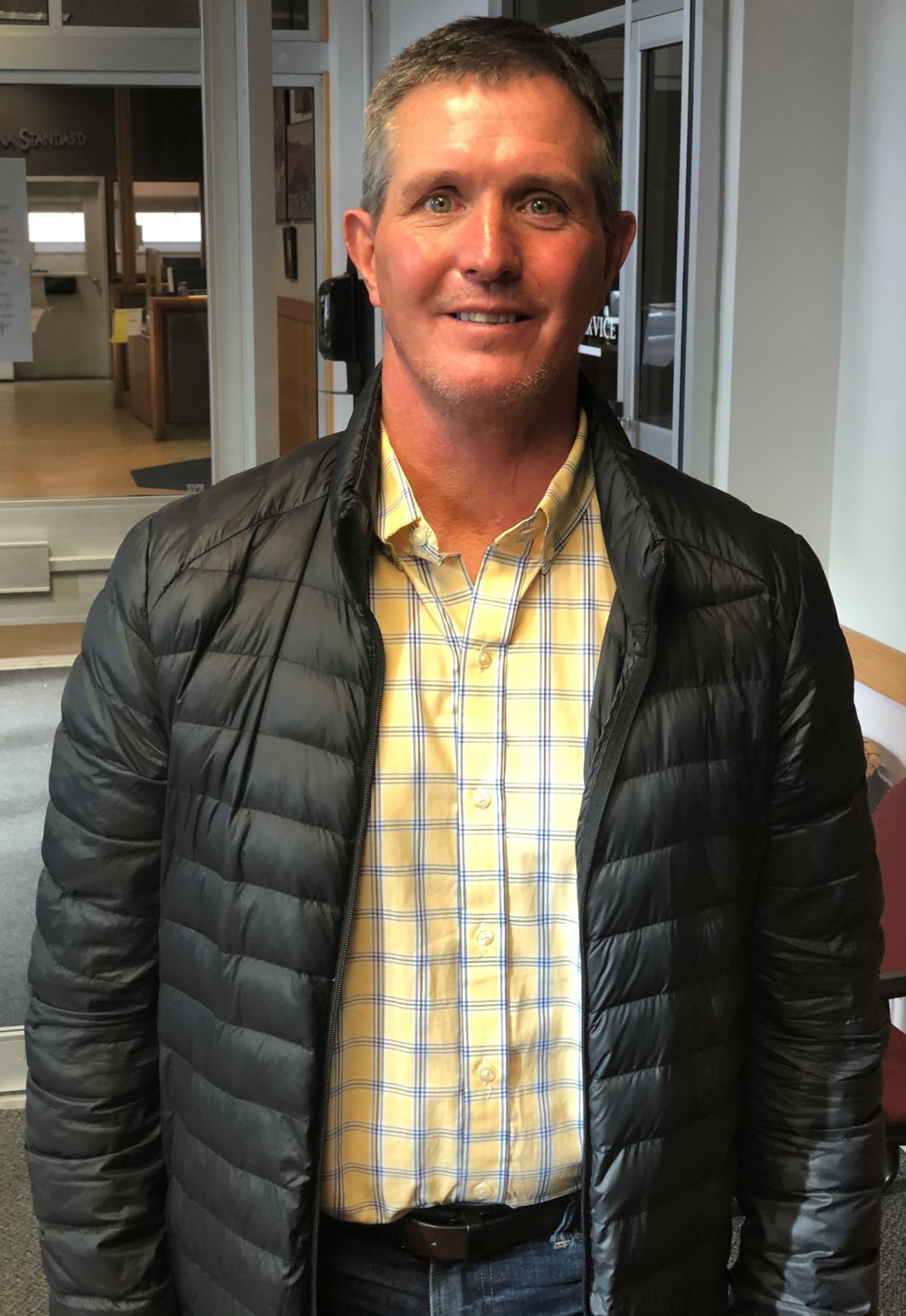 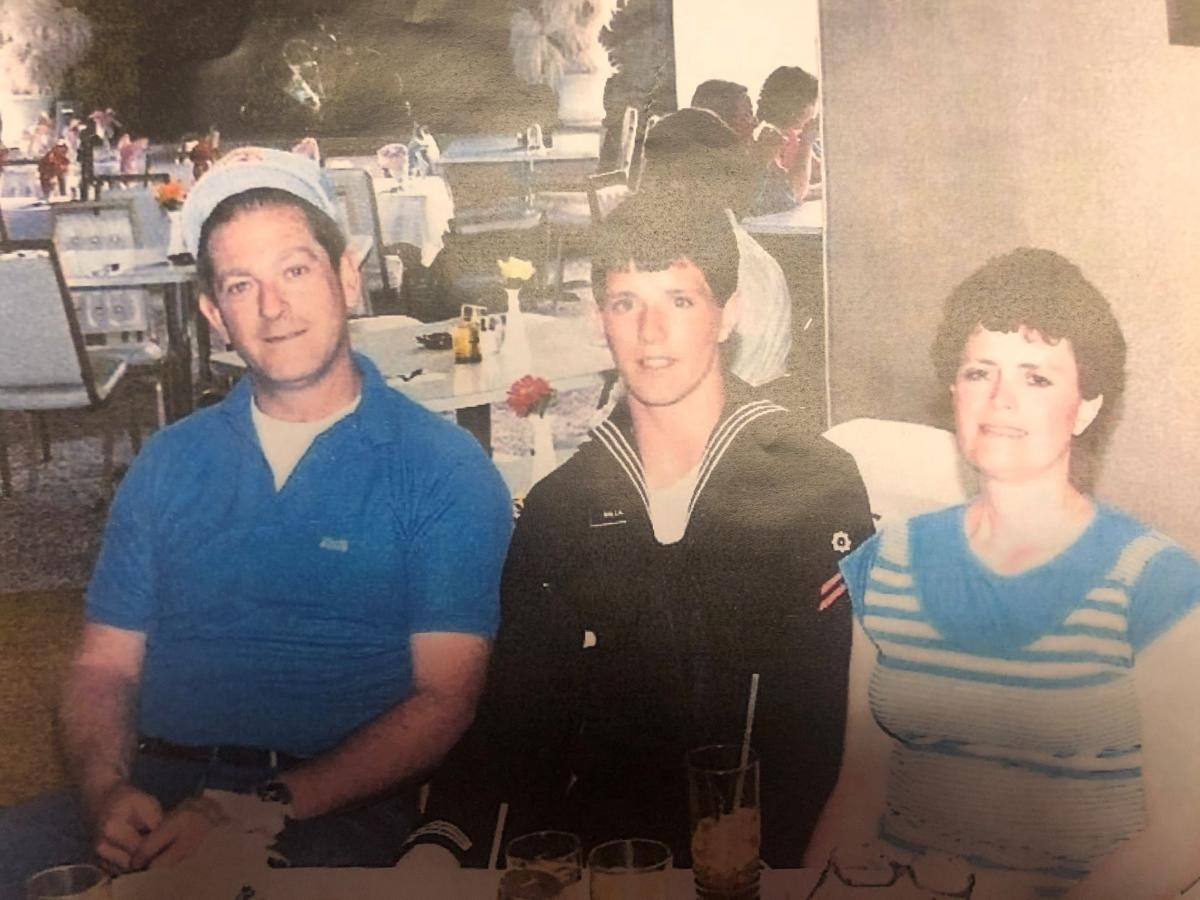 Parents Tom and Carol Gallagher flank J.P. Gallagher at the Butte airport as he headed out to San Diego. 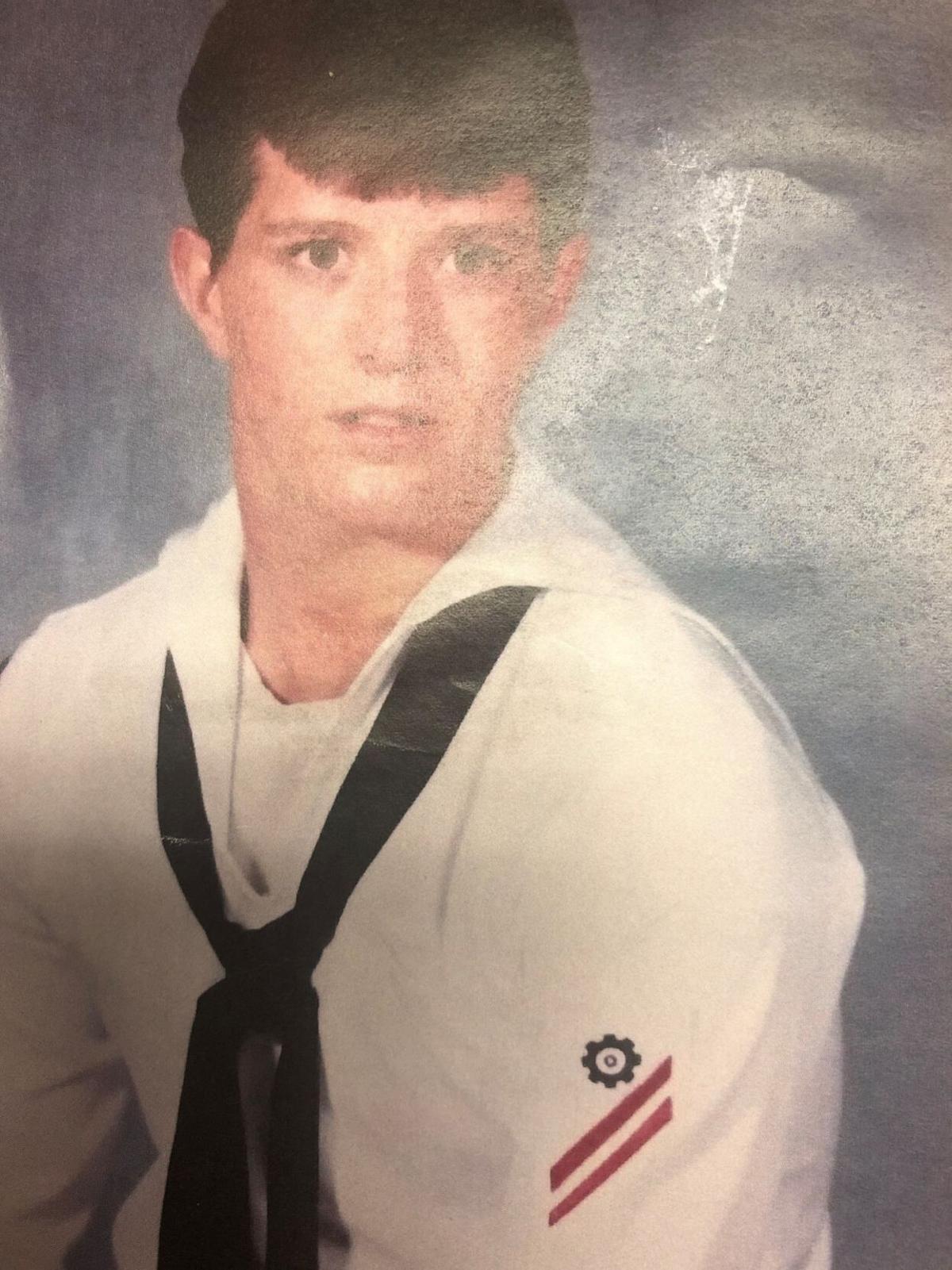 J.P. Gallagher during his Navy service.

As he prepares to take over as Butte-Silver Bow’s newly elected chief executive, J.P. Gallagher has already accomplished a lot in his life.

He has played college football, taught and coached, worked in business, worked as a school principal, and run the county’s Parks and Recreation Department.

But he says none of that might have happened if it weren’t for his relatively short time in the U.S. Navy.

When Gallagher graduated from Butte Central High School in 1984, he had absolutely no idea what he wanted to do.

“I knew I wasn’t ready to go to college,” Gallagher said. “I talked to the recruiters, and the Navy seemed like the best.”

Gallagher went to boot camp at the Great Lakes Naval Training Center in Waukegan, Illinois. And he stayed there for engineer’s mate training as a diesel mechanic.

All told, he was there just shy of seven months before receiving his orders to go to sea – with the USS Fresno (LST-1182), a tank landing ship in the Western Pacific.

The ship was already in Japan at Fleet Activities Yokosuka Naval Base, the nerve center of the Navy in the Western Pacific. So Gallagher flew there on a cargo plane from San Diego.

“I’d flown before,” Gallagher said, “but not on a cargo plane.”

Gallagher shipped out on the USS Fresno, traveling to Korea, Australia, Hong Kong, Diego Garcia, Hawaii and the Philippines before sailing back to San Diego.

Along the way, he became a “shellback,” part of an ancient seafaring rite of passage – and hazing ritual – for sailors crossing the equator for the first time.

But toward the end of his WestPac tour, Gallagher was working in the engine room and slipped on some steps, landing between some pipes and seriously injuring his knee, tearing cartilage.

He had to gut it out for about six weeks until the Fresno docked in San Diego. He went to Balboa Naval Medical Center for knee surgery, and they removed all the cartilage from his knee.

As he was recovering, a family emergency would change his life.

Tim Gallagher, one of J.P.’s older brothers, (Tim and Tom Jr. are identical twins, two years older than J.P.) was badly hurt in a motorcycle accident. He was in a coma for some 56 days before being sent to Seattle’s Virginia Mason Hospital for further treatment. He was given the last rites on three different occasions.

J.P. realized that he needed to be with his brother.

The Navy gave him an early discharge because of his family responsibilities. So he moved to Seattle and went to work at Virginia Mason as a pharmacy technician while continuing to care for his brother.

In all, Tim’s rehabilitation took more than seven months.

J.P. came back to Butte. By now, college seemed like an excellent option, so he enrolled at Tech. And – repaired knee and all – he walked onto the Montana Tech football program under Coach Bob Green, and he made the team at safety. But he ended up redshirting, and he realized that, wanting to be a teacher and coach, his best option was to transfer to Montana Western, which offered strong education curricula.

He walked onto that football program, which was just resuming, and over the next four years, playing for two more legendary coaches – Mick Dennehy and Mick Delaney – he was all-conference at safety every year.

“All three coaches have been huge influences in my life,” Gallagher said. And since they all live in Butte, he sees them frequently.

After getting his teaching degree, he took a job at Choteau, coaching the football team and teaching PE and health to seventh graders through seniors.

Then, coach Bob Applegate asked him to come to Flathead High School in Kalispell, where he taught history and coached the defensive line. Perennial power Flathead was then the largest school in the state, before the opening of Glacier High School, with more than 2,000 students.

After two years, Gallagher’s career took a different turn when he became a regional franchisee for Jostens, the class-ring and apparel company, covering a big swath of Montana, Idaho and Wyoming. But the extensive travel was tough on Gallagher and his wife Erna as they started a family. He thought he would have to go back to Kalispell since there were no appropriate jobs available in the Butte school district. But he ran into Mike Thatcher, CEO of Community Counseling and Correctional Services, and he said Thatcher told him, “We can’t lose more young families out of Butte,” and offered him a job at the juvenile facility CCCS then run at Galen, teaching and directing recreation programs.

He took it gladly, wishing to stay in the area, and the next year a job opened up in the Butte school district. He taught PE at the alternative school, coached golf and junior high football. Then, a year later, he got a job teaching history at the high school.

Over the next few years, Gallagher would get two master’s degrees, one in education from Graceland College, and one in administration from Montana State University.

That led to him being named principal at Whittier School, a job he held for five years.

“It was a great job,” he said. “But as an elementary school principal, it’s easy to lose a little connection with the kids, because you spend so much time in meetings. You’re doing everything – teacher evaluations, student discipline, meeting with parents. You don’t have a lot of other administrators. You do it all. It’s incredibly rewarding, and difficult.”

Then, Gallagher applied for and received the job of Parks and Recreation Director.

“It was a great time to become parks and rec director,” he said. “We’ve been able to do so much. The work at Three Legends Stadium was just starting. We were in the preliminary part of the effort to get a municipal pool, we took over responsibility for festivals, for the mineyards. It’s been a really big, rewarding job.”

One of the highlights, he said, has been the transformation of Stodden Park, not only with the Ridge Waters water park, but also with the addition of a world-class playground. Working with the Dennis & Phyllis Washington Foundation on that project has been amazing, he said.

“It gave me direction,” he said.

He’s very grateful for growing up in a great family. His father Tom, a Marine, worked as a cop and then a city court judge, and his mother Carol was a schoolteacher in the Butte district for 30 years. “But in many ways," Gallagher said, "I was protected. I never got in a lot of trouble or anything but my Dad being a cop meant that if I was speeding, I’d get a warning.

“But in the Navy, I was accountable, and I was on my own,” he said. “Going from a place like Butte where you have great friends and you know everybody to San Diego, where there’s a million people and everybody has their head down — it made me appreciate what we have here.”

The Butte-Silver Bow Health Department on Wednesday issued a new request to the community: Even with mild COVID-19 symptoms, don’t get tested.…

Wayne Calvin Baltezar, 56, of Butte, passed away unexpectedly on Tuesday, Nov. 17, 2020. Cremation has been entrusted to Axelson Funeral Home.…

Butte man attempts to light himself on fire

Thanks to the quick reflexes of a Butte police officer, a crisis was adverted early Monday night at the Thriftway Super Stop, 901 E. Front St.

With four new deaths at nursing homes, and another in the community, 25 people have now died of COVID-19 in Butte-Silver Bow County.

The county will demolish a deteriorating building on East Park Street and recoup $25,000 of the costs from the owners if commissioners authori…

Parents Tom and Carol Gallagher flank J.P. Gallagher at the Butte airport as he headed out to San Diego.

J.P. Gallagher during his Navy service.