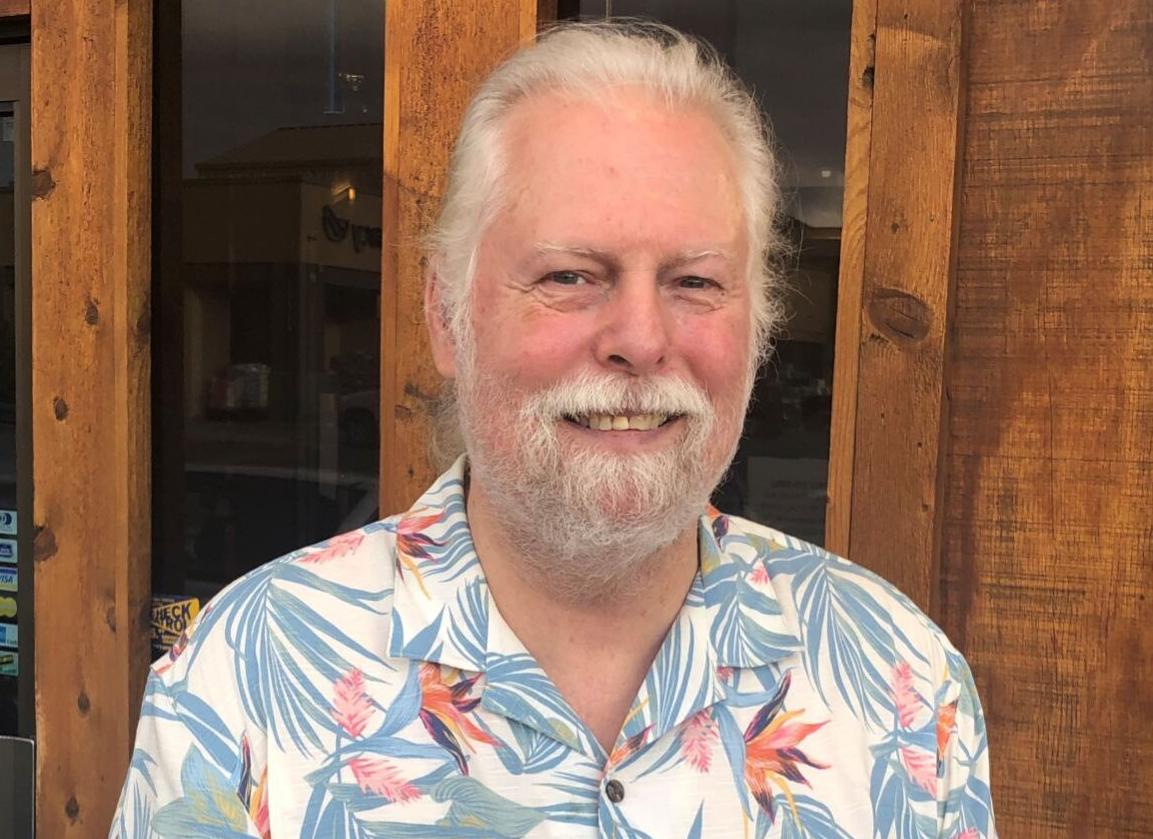 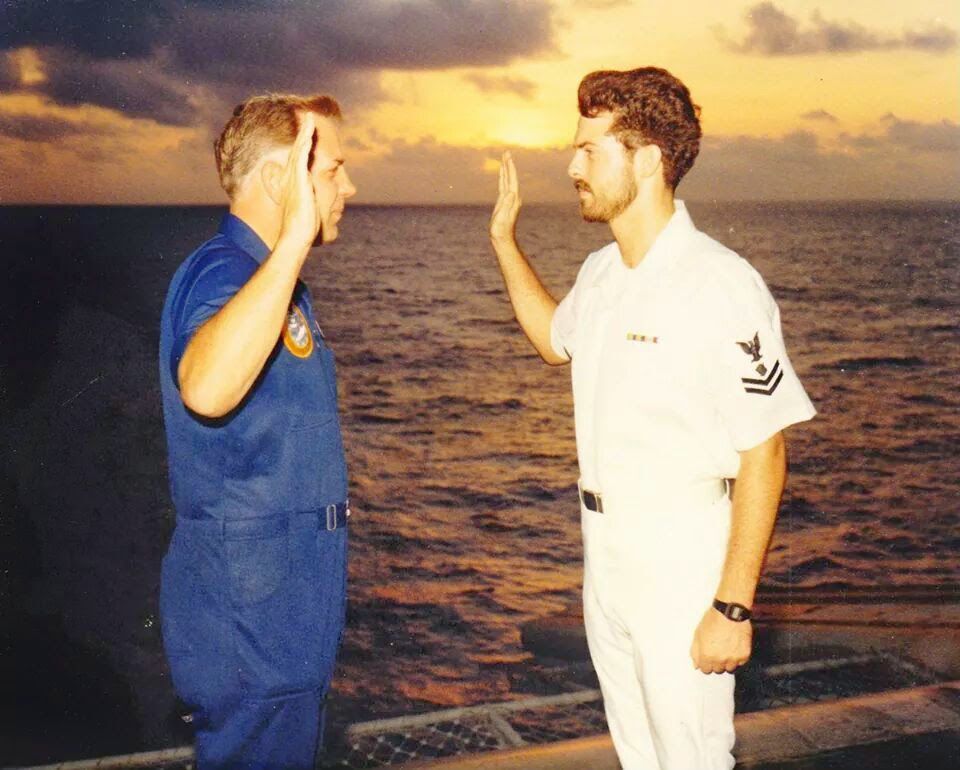 The Constellation's Captain, Denny M. Brooks, swears in Coleman at his first reenlistment. 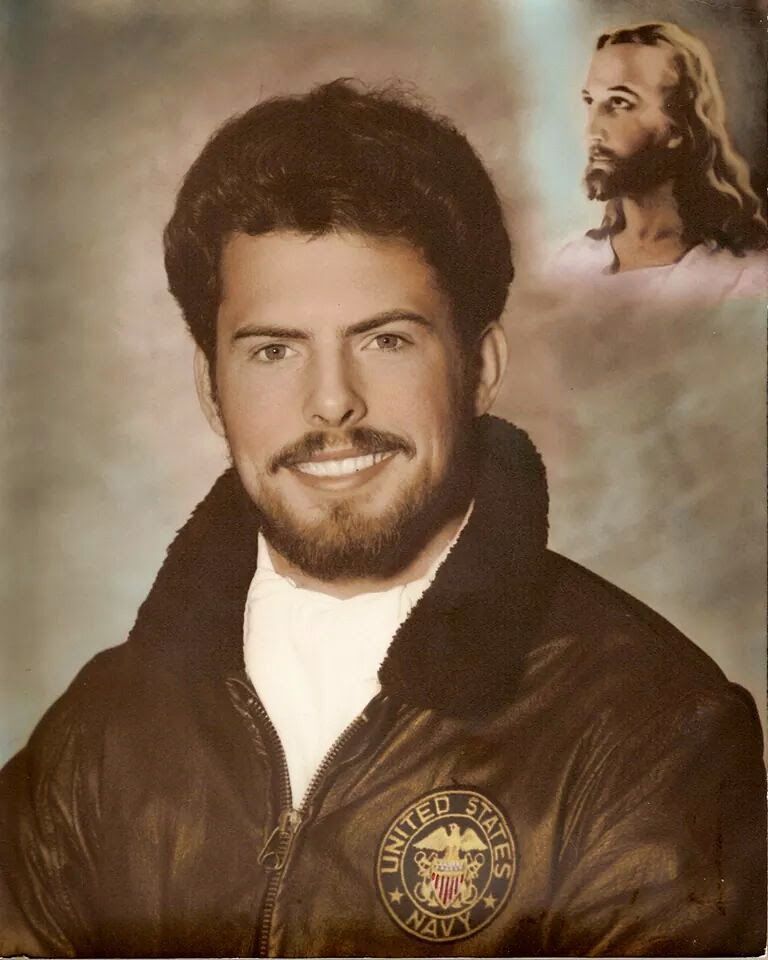 Coleman during his Navy career 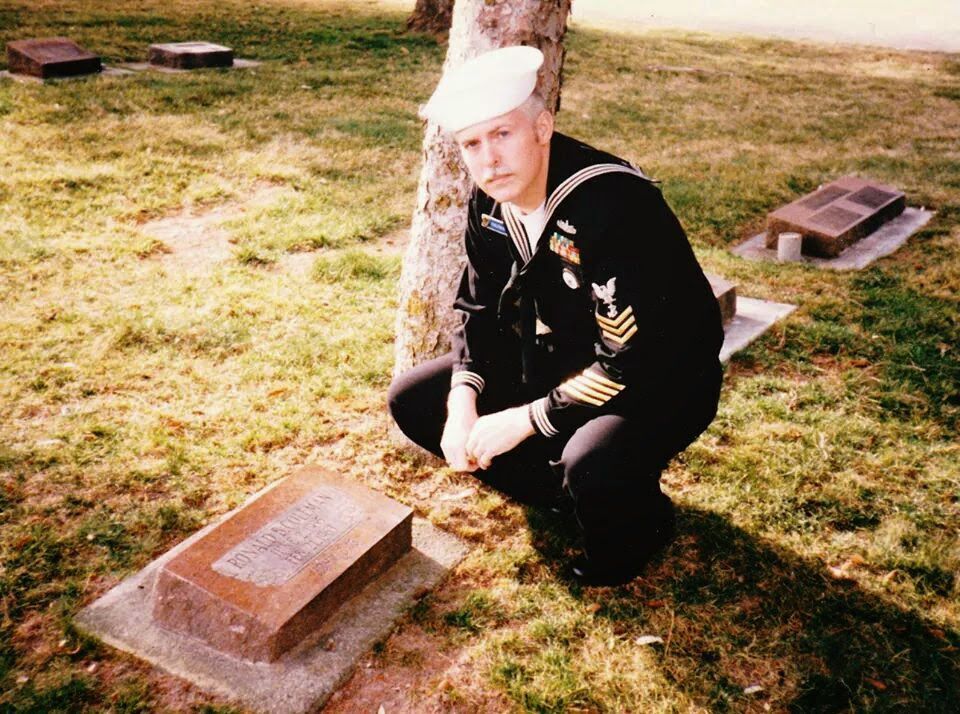 David Coleman during his Navy career, at his father's grave in Boise, Idaho.

David Coleman knew what he wanted to do.

By the time he reached high school in Clackamas, Oregon, he knew he wanted to join the Navy.

His parents were not nearly so enthusiastic, particularly after Coleman turned down a college scholarship in speech, debate and drama. But Coleman, who had signed up for delayed entry in the Navy during high school, made good on his plans, enlisting two weeks after his 1978 graduation and heading to San Diego for basic training. He had been scheduled to go to Orlando later in the summer, but when an opening came up in an all-Oregon recruit company that included four others from his high school, Coleman jumped at it. He thrived there, becoming Recruit Chief Petty Officer and receiving a meritorious advancement to E2 out of boot camp.

Next was "A" school at Naval Technical Training Center Meridian in Mississippi, where Coleman took his training to become a personnel specialist.

His first posting was a shore billet at North Island Naval Air Station in San Diego, where he worked in the personnel branch office. There, Coleman got his "sea legs" under him and began his post-training career on a good note, winning "sailor of the quarter" honors.

Then, he shipped out, headed for the USS Constellation, CV-64, a Kitty Hawk-class "supercarrier." But reporting for duty there turned out to be a challenge.

Coleman boarded a military transport flight to meet the "Connie" in the Philippines. It was a "milk run," with stops in Alaska, Guam, and "every rock in the Pacific," Coleman jokes.

He landed at Clark Air Force Base in the Philippines and boarded a tiny bus for a three-hour trip to Subic Bay. A monsoon was threatening, and by the time he got to the port, the Constellation had been forced to leave.

So began a 30-day "involuntary sea leave." Coleman discovered a Christian Service Center for seamen. It offered bunk beds, a piano, and Bible studies. "It was a healthy environment," Coleman said.

While he was "stuck" in the Philippines, Coleman worked with Navy Seabees, helping to install a huge water pipe through the jungle.

One day, he and another seaman were out applying a substance called "red lead" to pipe joints, when automatic weapons fire broke the silence of the jungle and bullets sprayed around them. They took cover the best they could, and escaped harm. "I'll never forget the sound of an AK-47," Coleman said.

Finally, he was able to get onto a replenishment ship, the USS Wichita, headed to the aircraft carrier in Singapore. On board the Wichita, he heard a familiar voice in the chow line and discovered a friend from North Island who was serving in a helicopter squadron aboard the ship.

When Coleman finally got to the Constellation, he reported to the personnel office and discovered he'd been promoted. "Welcome to the USS Constellation, Petty Officer Coleman," were sweet words to hear.

Just three days later, he received word that his friend the helicopter crewman had been killed in a helicopter crash east of the Maldives.

His deployment continued as the Constellation patrolled the North Arabian Sea near the Strait of Hormuz during the Iranian hostage crisis. "We were 118 days at sea," Coleman said.

He and some shipmates toured Tsavo National Park, and also donated some of their leave time to building a basketball court and a school classroom in Mombasa as part of Project Handclasp, a Navy humanitarian program.

Another highlight during Coleman's time on the Constellation was a visit from President Ronald Reagan.

Coleman would reenlist aboard the Constellation, and when he rotated to his next shore duty, it was in Seattle at the Navy Recruiting District.

The executive officer at that posting, a lieutenant commander, was clearly troubled one evening, and Coleman fatefully asked him if there was anything he could do to help.

"No, Coleman, that's okay" the lieutenant commander said. "I just have to find somebody to go to Butte, Montana."

"No, Coleman, you don't understand," the XO told him. "This is Butte, it's not Montana." Finally, the officer told him, "Come see me in the morning if you're serious."

So Coleman did, and he got the billet.

The Military Entrance Processing Station in Butte was then in the Hotel Finlen, so he shipped his belongings there and hopped on a bus to Butte.

He arrived in the evening of November 5, 1982. "It was 40 below, with three-foot snowdrifts and ice-covered sidewalks," he remembers.

Two Navy men from the MEPS met him, and despite having to ride in the back of a Dodge pickup, he was entranced with what he saw.

After he got checked in, he was told, "You're going hunting with us tomorrow," and his new colleagues took him to Woolworth's, where he got hunter's orange gear and a license. "I'd been in Butte an hour and I already had a hunting license," he said.

He couldn't believe how beautiful the town looked at night — "like diamonds on black velvet," he said. The next morning, he woke to stare at a pile of tailings, but he was undeterred.

About two weeks later "On the night of the 19th of November," he remembers, "the Cavalier was offering free hors d'oeuvres at happy hour." He went and joined his crew at the already-crowded bar. There was a beautiful woman at the end of the bar, with her coat and belongings very deliberately stacked on the chair next to her to discourage unwanted company. But it was the only empty chair at the bar, so Coleman, decked out in his dress blues, asked her politely if he could help her hang up her coat and then use the chair to sit next to his friends.

She grudgingly agreed. By the end of the evening, when they were the only customers left in the bar, he asked her if she'd go out on a date. She agreed, and when he asked her where she wanted to go, she said, "Let's go fishing."

He and Patti were married six months later.

By the time Coleman's tour was done, in 1986, they had two boys, and Butte had a king-sized economic downturn.

Coleman tried to get on at the Police Department, took the test and did well, but just missed out on the only open positions.

When he was discharged, he had filled out a reenlistment package, just in case. It became evident that he needed to reenlist to support his family, so he took his package down to the recruiter and said, "Here you go."

The newly reenlisted personnel specialist was sent to NAS Whidbey Island, where he worked at the family service center, awaiting the return of  his new unit, Electronic Attack Squadron 132 (VAQ-132). EA6B Prowlers, currently deployed in the Med aboard the USS Forrestal.

By the time they returned, he had all the personnel documents sorted and ready. The squadron commanding officer called him into his office, shook his hand and said, "We've never had such a smooth transition."

He would deploy several times with the squadron — seeing everything from the northern fjords of Norway to the Arabian Sea once again.

After another reenlistment and a promotion to E6, Coleman pulled more recruiting duty, this time in Great Falls, where he was responsible for recruiting at some 52 high schools, from Browning and the Flathead all the way to North Dakota.

Next was a three-year tour aboard the USS Mobile Bay, a guided missile cruiser homeported in Yokosuka, Japan.

Coleman by now was a Personnelman First Class. And wife Patti assumed a big job — ombudsman of the Mobile Bay. In the Navy, ombudsmen, who are often spouses of senior enlisted personnel, serve as liaison between the ship's command and the sailors' families, and as a point of contact to assist families navigating through Navy life. Patti filled that role under two different commanding officers on the USS Mobile Bay.

For his last duty station, Coleman was sent to the submarine base at Bangor, Washington. He was senior enlisted man at the family service center there.

Coleman is proud of the fact he worked with Seabees, naval air and shipboard commands, and with submariners in his long career.

He retired from the Navy for a second time in 1998, and he and his wife both went to college, first at Olympic College in Bremerton, and then transferring to Montana Tech, where Coleman graduated with honors in liberal studies.

Coleman was elected to the Butte-Silver Bow Council of Commissioners for one term 2004-2008. But at the same time, tragedy struck when the Colemans' son, David B. Coleman II, a Marine, was severely injured by an IED in Iraq. Coleman was at Bethesda Naval Hospital with his son when he found out he had won his commission race. Son David II is doing much better these days, Coleman said.

Coleman worked for Community Counseling and Correctional Services in a variety of roles for several years, earning his license as an addictions counselor, which he still holds, having retired just last month from CCCS.

He's very active in the military community. He is a past commander of Disabled American Veterans Chapter 6, a life member of VFW Post 1448, and has been a member of the American Legion. He's music director at Gold Hill Lutheran Church, and still works as a professional musician.

The Constellation's Captain, Denny M. Brooks, swears in Coleman at his first reenlistment.

Coleman during his Navy career

David Coleman during his Navy career, at his father's grave in Boise, Idaho.