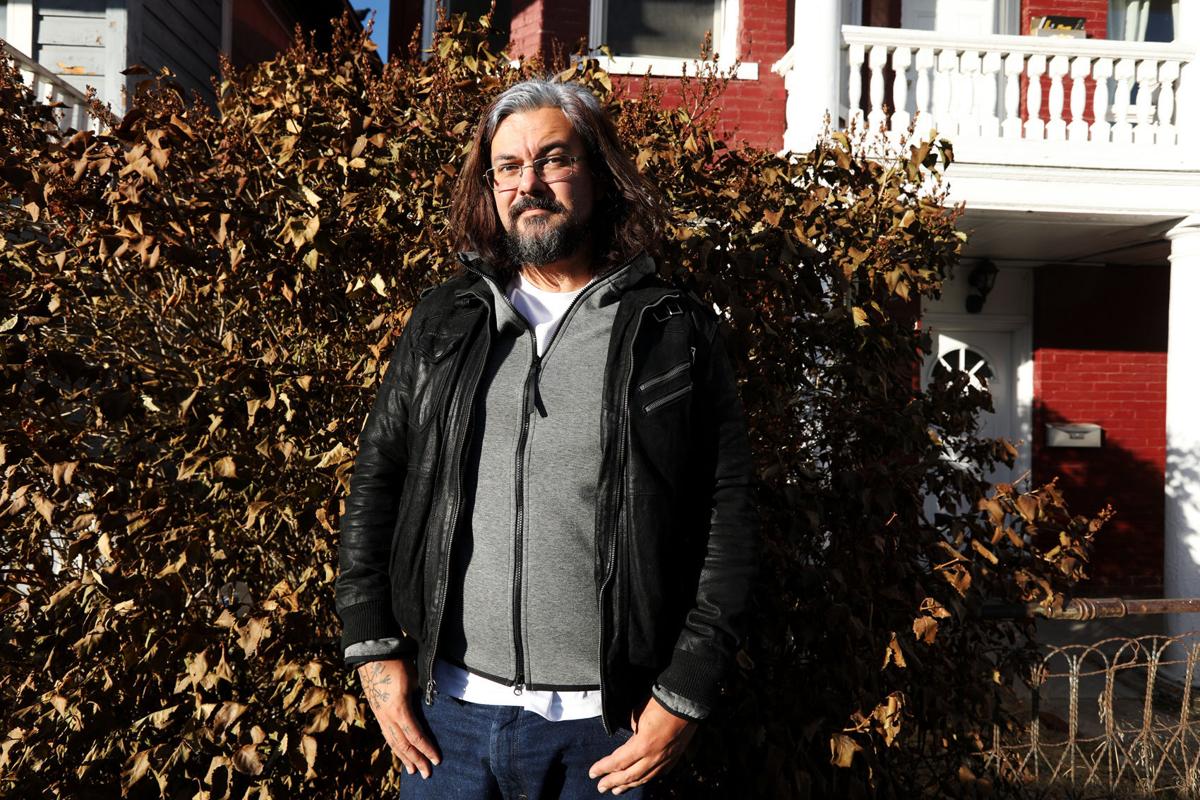 David B. Coleman II is photographed on West Park Street near his home in Uptown Butte. 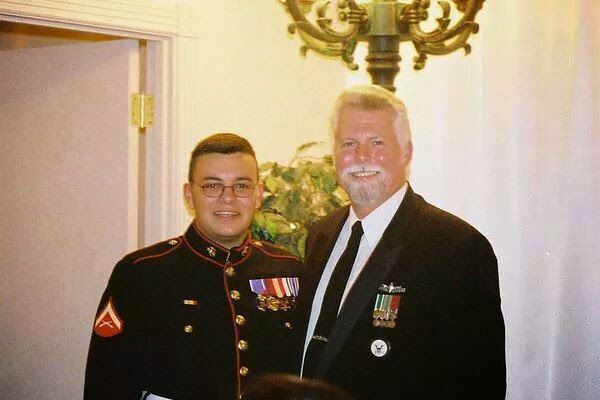 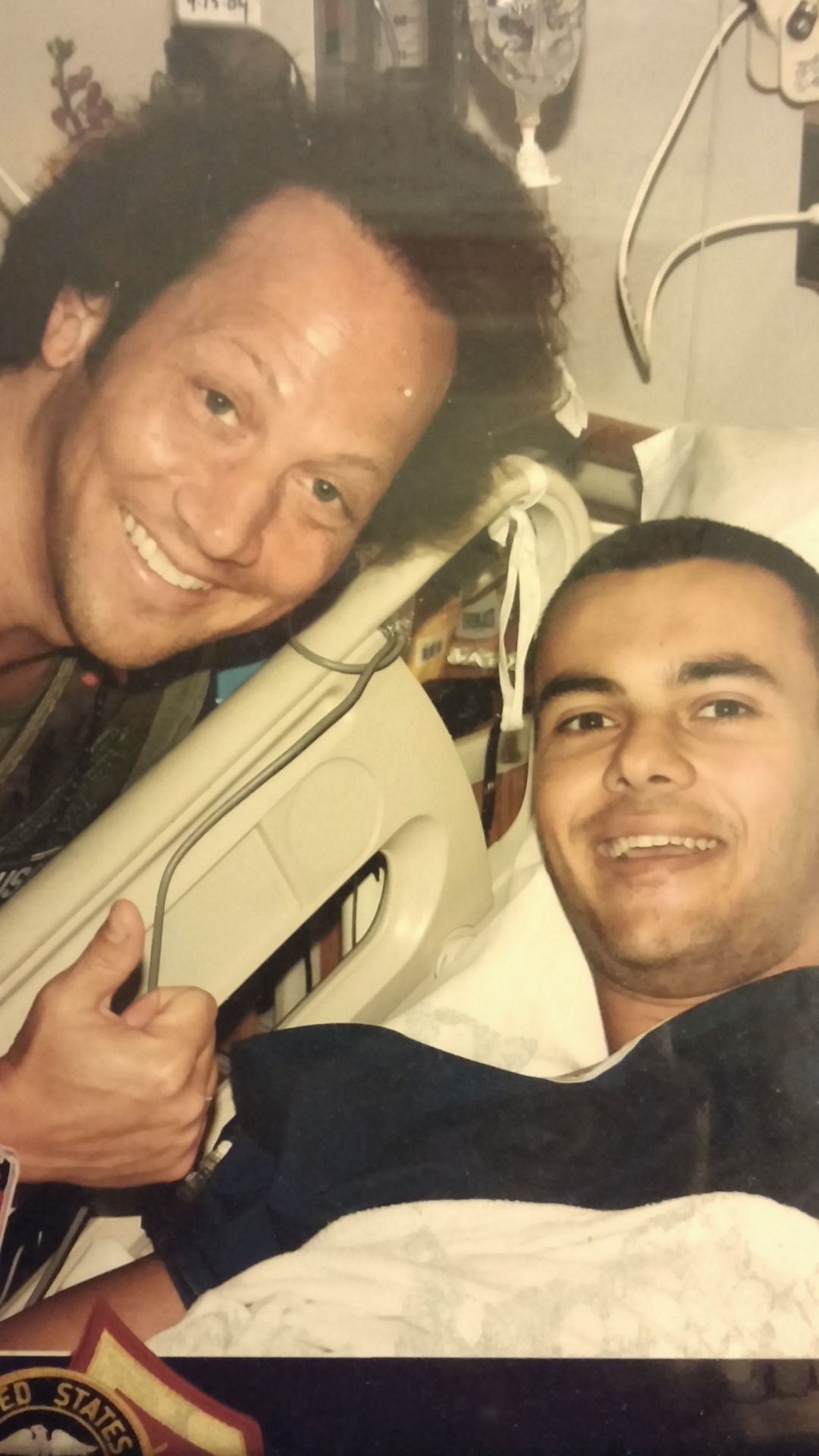 Actor Rob Schneider visited Coleman while he was convalescing in the National Naval Medical Center in Bethesda, Maryland.

“There is no instance of a nation benefiting from prolonged warfare. ... who wishes to fight must first count the cost." — Sun Tzu, The Art of War

David Coleman II went to war as a United States Marine. His war was short, his sacrifice large and long.

He'd do it again in a heartbeat.

Coleman wears his scars, inside and out, as others might wear their daily suit of clothes.  They do not define him. They do not require explanation. If asked about them, he is open, courteous, matter-of-fact. He does not need or want sympathy. Friendship is different. Really, friendship is just about everything, which is why he loves his home, Butte, America.

Coleman grew up in a military family. His father, David Coleman, was a career Navy man, and that meant a childhood bouncing around, from Great Falls to Missoula to Japan to Bremerton and Bangor, Washington.

But by the time David was in high school, the family was settled in Butte, and he got to spend all four years as a Butte High Bulldog.

After graduation, he worked for awhile at a video rental store, but that wasn't going to be a career. He told his Dad he was thinking about joining the Army with a friend on the buddy plan.

But his Dad, who had himself been a recruiter, urged him to talk to recruiters for all the services. "He told me this isn't a deal where you can just try it, it's a commitment," Coleman said. "So I talked to them, read all the pamphlets, did my research."

And decided to become a Marine.

The history, the pride. ""Every every small engagement, every major battle, it seems like the Marines were there, bleeding together in the mud," Coleman said.

He headed to the Marine Recruit Depot in San Diego. "It was intense," he said. "They are training you to fight for your life and the lives of the Marines next to you. They give you impossible tasks, and punish you when you fail. They want you to learn to deal with that mentally."

From boot camp, Coleman headed to the Marine Combat Training School of Infantry in Oceanside.

"Every Marine, no matter what their job, is a rifleman," Coleman said. "This is where they teach you small unit warfare strategy, how to call in artillery, stuff like that."

Every bit of that training, particularly the mental toughness part, would be vital to him.

Coleman was interested in infantry. But, he says, his mom didn't want him at the front lines. So they compromised. He chose artillery.

He went to artillery training at Fort Sill, Oklahoma, and his math skills got a workout. "We learned to put rounds on targets," he said simply. "Everything comes into play, things like barrel temperature. I was good at the math."

Then, he was off to Camp LeJeune, North Carolina, for a short time — three or four months — before his unit, Sierra Battery, 5th Battalion, 10th Marine Regiment, 2nd Marine Division — got orders to Iraq.

The unit headed to Kuwait for staging — and there, as so often happens in war, they got a surprise.

As they were loading their cannons for the trip into Iraq, the commanding officer announced new orders.

The unit was, for the moment, relieved of their artillery responsibilities, trading the long guns for security duty. Near the Syrian border and near the border with Jordan, security emplacements were needed to protect vital compounds where computer operators were running the drone war.

Coleman's unit were split into three units — one for each border area, the third a headquarters company. Coleman was assigned to the group headed toward the Jordanian border.

They established a forward operating base near Trbil, Iraq, at the site of an old gas station.

"We threw up some dirt berms around it and said, 'Okay, we live here now,'" Coleman said with a smile.

The unit settled into a routine — a rotating cycle of patrols, guard duty, down time — carrying out their mission.

Then came new orders: The unit was to train on the use of the Dragon Eye drone system.

The Dragon Eye is a very small drone, three feet long with a wingspan of less than four feet. It's maneuverable and enormously useful in urban warfare situations where reconnaissance is needed in confined spaces. It was brand new at the time and is still used today.

So the unit saddled up again and convoyed toward the headquarters company base near Trbil, Iraq, where a helicopter would take them to their assignment.

On the way, Coleman's world was changed forever.

As the Humvee he was riding in rumbled across the desert, an IED — improvised explosive device — was detonated directly underneath it.

The Humvee cartwheeled into the air, flipped and slammed to the ground. Coleman and another Marine were badly hurt.

Coleman realized that bones were sticking from his right leg. But his left leg was much worse, almost entirely detached from his body. And he was bleeding from the head.

Buddy Mark Duncan desperately lifted Coleman's torso, putting his torn legs upon his shoulders to try to get the bleeding under control. He was airlifted by chopper to a mobile medical unit and then again to a base near Balad, Iraq, where he received morphine.

"The Marines at the scene did great," he said. "The first thing they do is 'circle the wagons,'" making sure there was no followup attack. "They got the guy who blew me up," he said. "It was a Syrian 155-millimeter artillery round, triggered by cell phone. Everybody near the scene was milling around, shocked, but one guy was running away. They caught him and he confessed.

He would learn later that at the base hospital in Balad, during the triage process, his wounds were deemed unsurvivable.

But then a chaplain noticed that he was not dying and alerted medics, who decided Coleman was going to make it, and he began to receive more treatment.

The next thing Coleman remembers, he was in a hospital in Germany.

That's when his journey back to Butte began.

In addition to the damage to his legs, Coleman had suffered a traumatic brain injury.

He would be hospitalized for the next three years, most of that time at the National Naval Medical Center in Bethesda, Md.

While he was in the D.C. area, he rode in President George W. Bush's 2nd inaugural parade. And he was visited by celebrities.

Slowly, he went from wheelchair, to walker, to crutches, to cane. And in late 2007, when he no longer needed the cane, he came home — more than three years after the attack that injured him.

"It's not just my friends from high school. They have been great," he said. "But it's everybody — everybody in Butte. And that's why this is home."

At first, he was judged 30 percent disabled. With the help of veterans' groups that has finally been corrected. He disability was set at 100 percent, and he has been officially classified as medically retired.

He has been working with therapists, improving his speech, dealing with PTSD and his leg injuries as well.

Recently, he has been working as an adult actor with the Orphan Girl Children's Theater. It's been a great experience for him. Currently, he's starring in "Poe," a performance being shown via Facebook.

Once a Marine, always a Marine. Despite Coleman's ordeal, "It meant a lot to me to be a Marine," he says.

Brian Tesson said he cannot recall a time of greater turmoil for the Anaconda school district.

Dylan Harrison, 26, of Butte is jailed at the Butte Detention Center for allegedly shooting a 66-year-old man in the hand with a .45-caliber handgun.

Brody's safe: On the eighth day, rescuers bring dog in

In the minds of his owners, rescuers and hopeful supporters in Butte, Brody's story could only end one way.

Man who threatened Butte officers and their families pleads guilty

Dee’s House of Hair, 411 E. Front St., was broken into early Monday morning, and the perpetrator(s) took anything of value, but not before pou…

You can say goodbye to most of Civic Center Road in Butte for at least the rest of this year, but in the end, the city will have a new-and-imp…

David B. Coleman II is photographed on West Park Street near his home in Uptown Butte.

Actor Rob Schneider visited Coleman while he was convalescing in the National Naval Medical Center in Bethesda, Maryland.