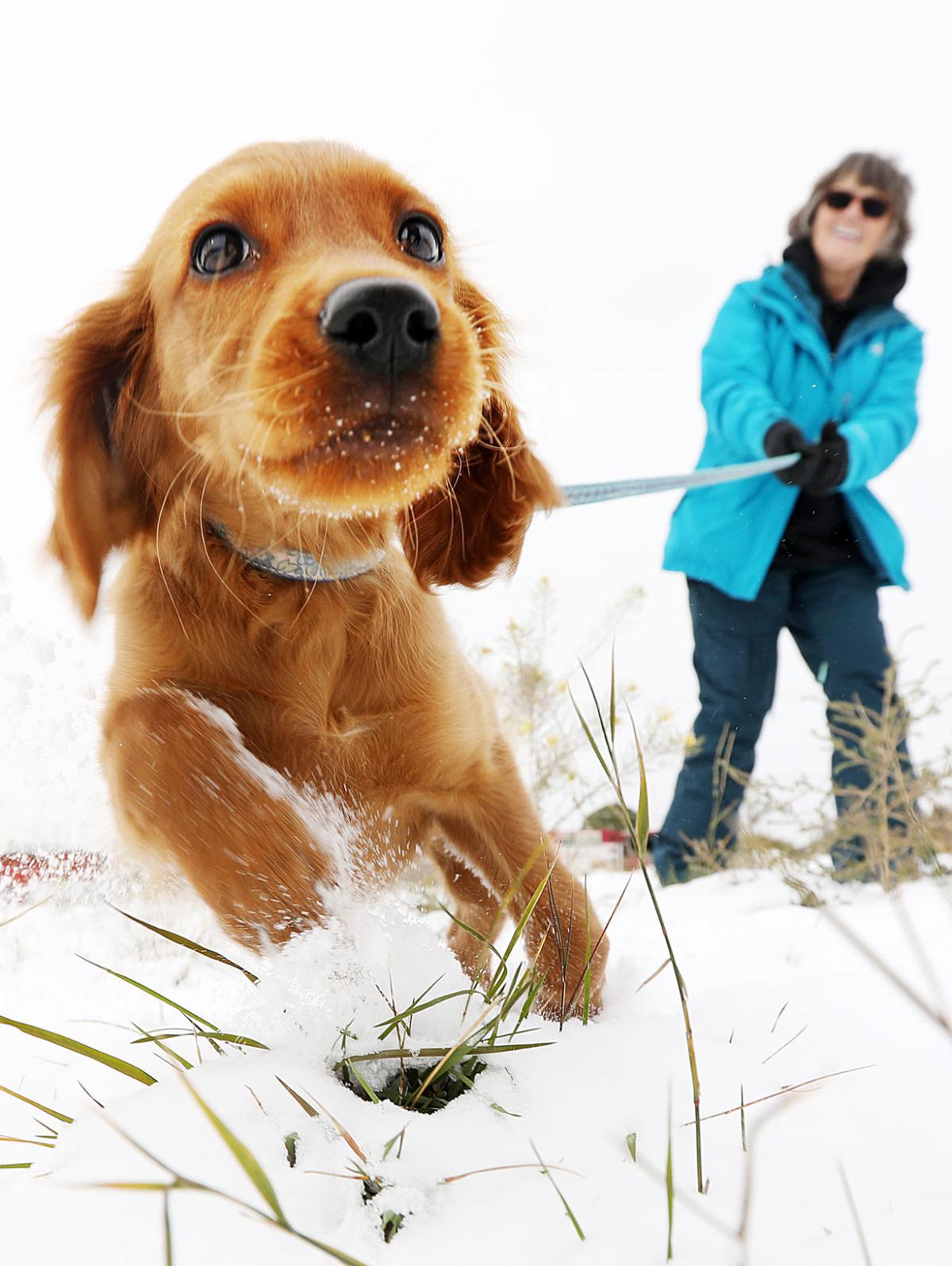 Mattie, an 11-month-old golden Irish retriever, prances through the snow with her owner Francie Cleverly on Wednesday afternoon in Butte. 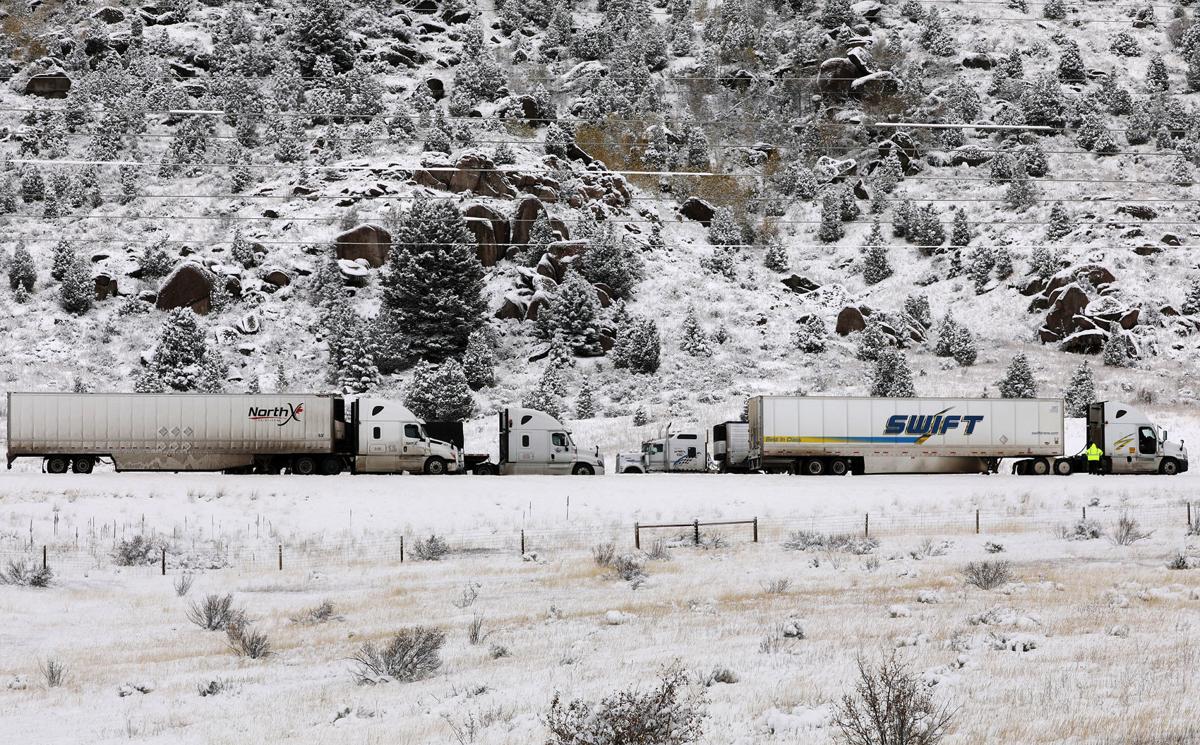 Semi trucks line up in both directions along the shoulder of I-90 near Continental Drive at the base of Homestake Pass on Wednesday morning in Butte. 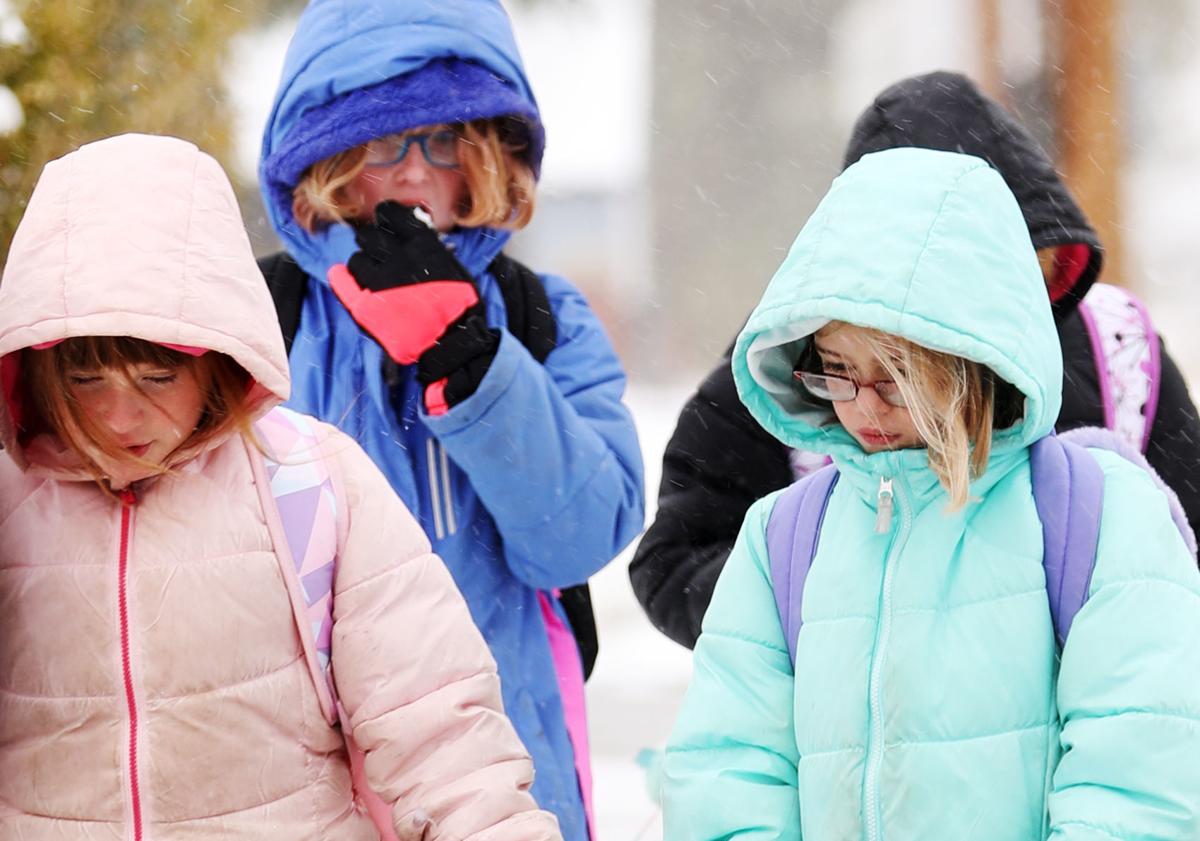 Gwendolyn Butler, left, Ona Nickisch, center and Neala Nickisch, are all bundled up against the falling snow as they walk home from school on Wednesday afternoon in Butte. 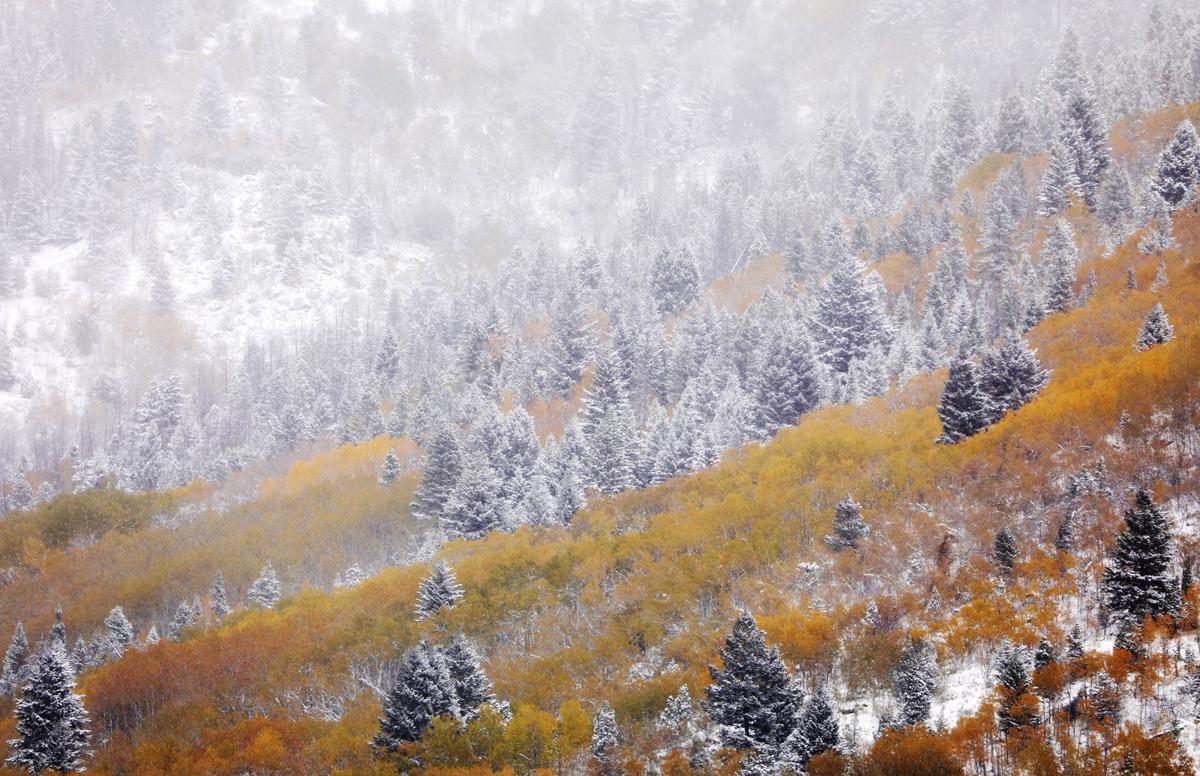 Trees hang onto their golden leaves as snow falls on the East Ridge on Wednesday morning in Butte.

Mattie, an 11-month-old golden Irish retriever, prances through the snow with her owner Francie Cleverly on Wednesday afternoon in Butte.

Semi trucks line up in both directions along the shoulder of I-90 near Continental Drive at the base of Homestake Pass on Wednesday morning in Butte.

Gwendolyn Butler, left, Ona Nickisch, center and Neala Nickisch, are all bundled up against the falling snow as they walk home from school on Wednesday afternoon in Butte.

Trees hang onto their golden leaves as snow falls on the East Ridge on Wednesday morning in Butte.

Numerous sections of Interstate 90 and Interstate 15, including Homestake Pass near Butte, were closed at various times in Montana on Wednesday because of snow and icy road conditions or crashes.

Butte police and firefighters had their hands full in and around town as well because of an unseasonably cold weather system that had a final punch to come with near-record low temperatures around zero expected early Thursday morning.

The Butte Rescue Mission’s homeless shelter was nearing capacity and there were no additional beds available for men because that unit was at its maximum of 21, said Mission Executive Director Rocky Lyons. But that situation has existed for about a week, she said.

In fact, she said, the shelter at Platinum and Arizona streets has been housing 45 people or so since the second week after it opened on June 11, and that does not include a “low-barrier shelter” that isn’t operating yet.

There is still work being done on that unit, which can take in people overnight even if they are drunk or high on drugs. It could be open by the end of October, Lyons said, but there is a bed limit of 56 for the entire campus, including the low-barrier unit.

Of the 45 people at the shelter Wednesday, nine were children.

Even though the Mission can only sleep 56, people can sit in the dining room and have coffee to stay warm when weather gets this cold, Lyons said.

The Montana Department of Transportation closed eastbound traffic over Homestake Pass temporarily early Wednesday morning because of hazardous conditions, and other sections of interstates and state highways throughout the state were closed for a time.

They included a section of I-90 near Livingston, where numerous vehicles collided causing a total blockage, the agency reported Wednesday afternoon. I-15 at Monida Pass in far southwest Montana was closed for a time, too.

In Butte itself, many people were obviously not accustomed to winter driving this early in the season, said Undersheriff George Skuletich.

“We had to call in extra dispatchers just to handle the influx of calls,” he said Wednesday morning. “There are slide-offs in town, slide-offs on the interstates.

“Every time it snows this early, people forget how to drive,” he said. “The biggest thing is leaving enough space between you and other cars. It should be double what it is” in normal conditions.

The unseasonably cold storm system moved over the Northern Rockies Tuesday and Tuesday night through Wednesday morning, prompting winter storm warnings for much of western Montana, including Butte.

The inclement weather was to move eastward Wednesday night, but clearing skies with very cold air for this time of year were expected to result in near-record low temperatures across much of the Northern Rockies, the National Weather Service said.

The coldest areas were forecast for southwest Montana, with lows of zero to 5 above. In Butte, that would be the second-coldest reading this early. It reached minus 12 on Oct. 9, 1985 in Butte.

Highs were expected to warm to near 30 under sunny skies Thursday and reach normal readings in the upper 40s to low 50s Saturday into early next week.

The Springs At Butte