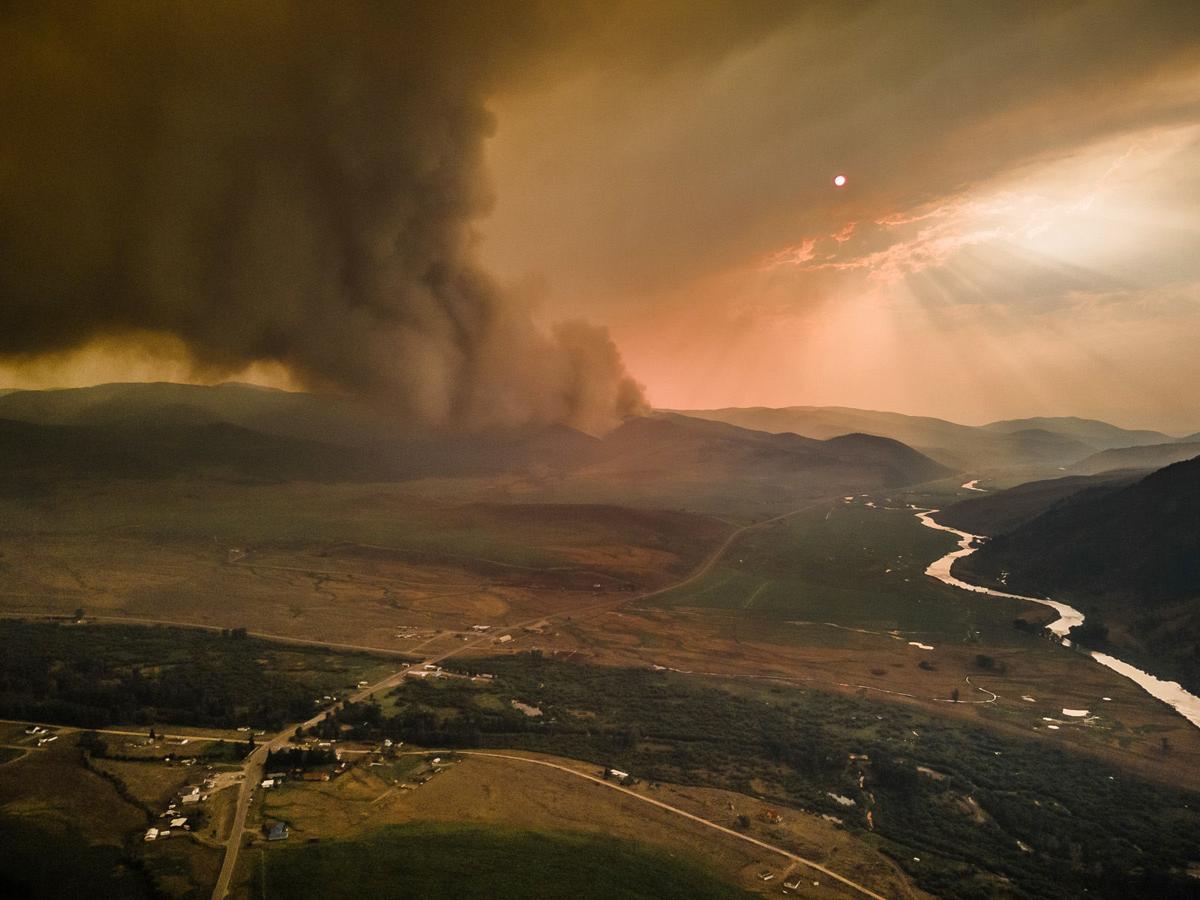 An aerial view of the Alder Creek Fire is seen from Wise River. 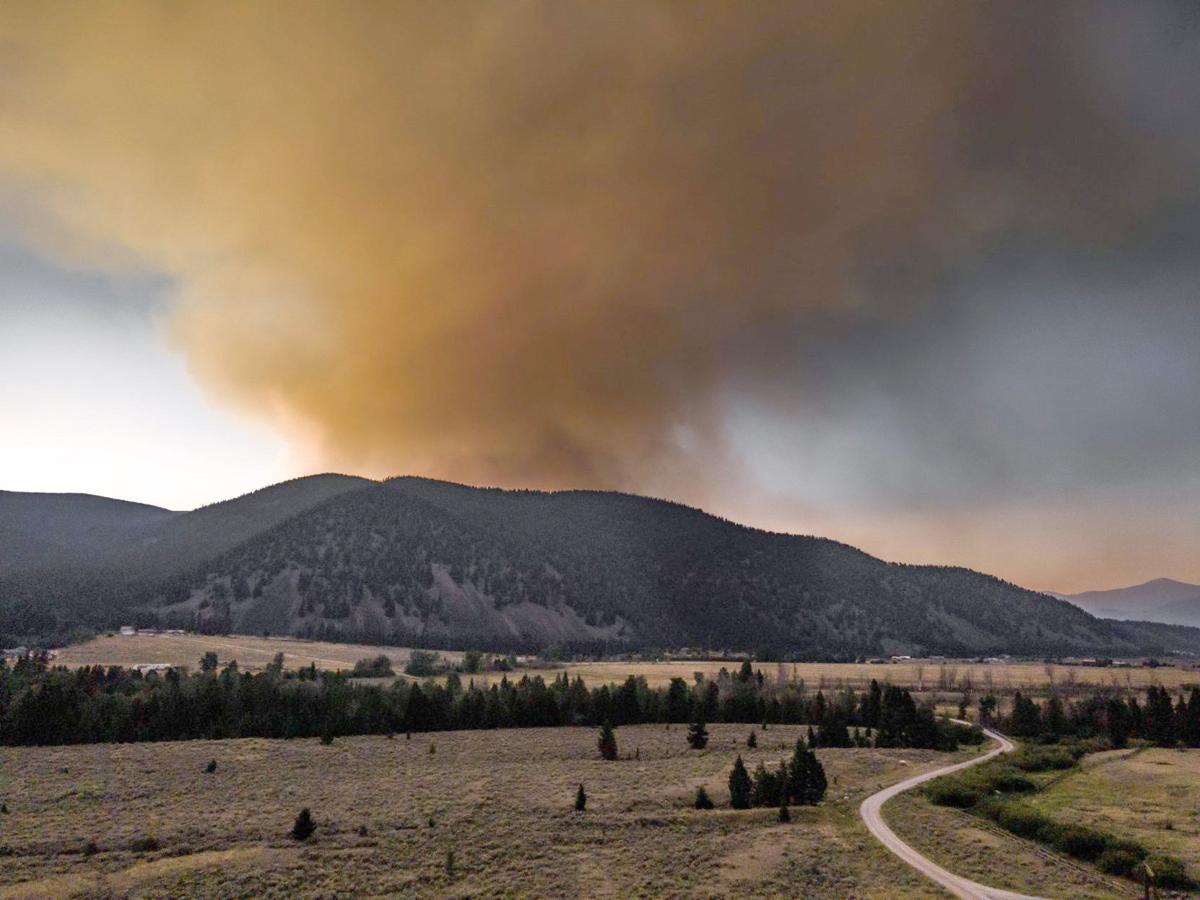 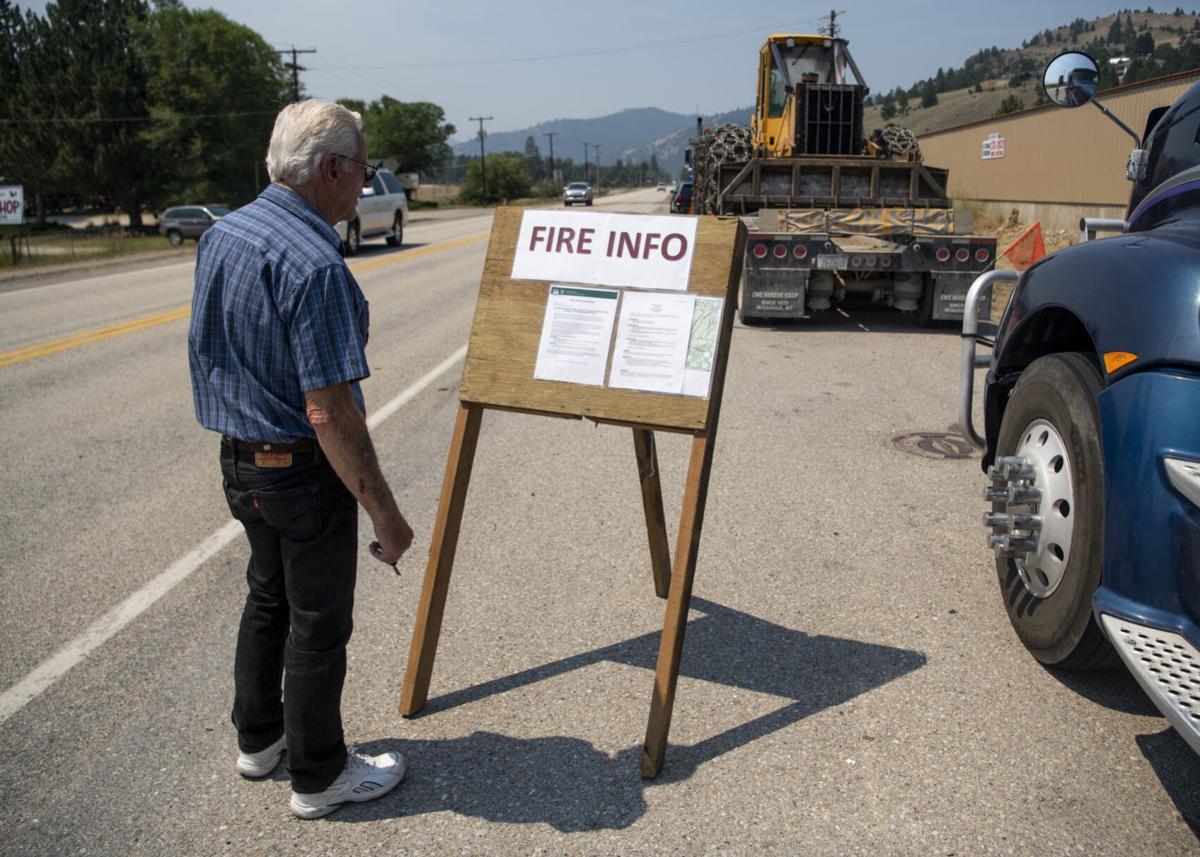 Vic Sandau, a resident near Lolo, reads information on the Lolo Creek Fire on U.S. Highway 12 on Sunday.

Smoke-filled skies from multiple wildfires burning in Montana and other western states have prompted air quality alerts for parts of southwest Montana, including Butte-Silver Bow, Beaverhead, Anaconda-Deer Lodge, Granite and Silver Bow counties. The air quality alert is due to elevated particulate concentrations from the fires.

Butte’s particulate levels fluctuated between “unhealthy for sensitive groups’’ and “moderate’’ on Monday, settling in at “moderate’’ at last report at 8 p.m.

For more information visit the Montana Department of Environmental Quality at http://todaysair.mt.gov.

The Alder Creek Fire west of Wise River prompted the Bureau of Land Management to close portions of the surrounding area on Monday morning due to public safety concerns.

The closure is in effect for all BLM-managed lands southwest of Montana Highway 43 between Wise River and the intersection of Mill Creek Road.

Crews continued Monday to construct a fireline in the Alder Creek drainage, install sprinklers, and lay hose in preparation for burnout operations.

The Alder Creek Fire, first reported on July 8, grew to 500 acres by Monday evening, with more active fire days in the forecast.

For the most current information, visit the incident’s page on InciWeb: https://inciweb.nwcg.gov/incident/7641/.

The Goose Fire, located about 32 miles south/southeast of Ennis, progressed southward Monday to approximately a half-mile south of Hidden Lake.  Airtankers dropped retardant Monday evening to strengthen the line and bolster the efforts of the ground crews along the northern flank. Helicopters assisted ground crews with water bucket drops to cool three spot fires on the northeastern side.

Authorities said the cause of the Goose Fire remains under investigation. The Monday update said 170 people were fighting the fire.

The Beaverhead-Deerlodge National Forest has closed a number of roads in the vicinity of the Goose Fire. For more information, go to to https://www.fs.usda.gov/alerts/bdnf/alerts-notices

Over the past week, seven incident management teams have mobilized in and around the Lolo National Forest. The Northern Rocky Mountains region has become the nation’s highest priority for firefighting resources due to the surge of new blazes. Two fire complexes are burning in the northern Bitterroot Mountains.

The Granite Pass Complex includes the Lolo Creek Fire (60 acres), BM Hill Fire (837 acres) and Shotgun Fire (50 acres). The Missoula County Sheriff’s Office has an evacuation warning posted for the sparsely populated area between Lolo Pass and Lolo Hot Springs along Highway 12. Motorists traveling the highway are asked not to stop and view fire activity, as it can hinder fire crews and cause safety hazards.

The West Lolo Complex encompasses the Sunset, Thompson and Deep Lookout fires in the Superior Ranger District of the Lolo National Forest between St. Regis and Superior. It also includes the Siegel, Quinns, Sheep Creek and Winniemuck/Thorne Creek/Deep Creek fires between Quinns Hot Springs and Thompson Falls in the Plains/Thompson Falls Ranger District. All these fires are relatively small, but have the potential to grow together.

East of Missoula, the Brewster Fire near Rock Creek appears close to control as fire crews reported good progress containing its spread on Sunday. It has burned about 156 acres.

The Balsinger Fire about 7 miles west of Neihart was listed at 2,500 acres and the Ellis fire along the Smith River corridor was listed at 850 acres.

They are among several fires that started in the Belt Creek-White Sulphur Ranger District Thursday afternoon. Helena-Lewis and Clark National Forest has expanded the Balsinger fire closure area on Monday.

Also on Monday, officials listed the Rock Creek fire up near Wolf Creek as 80% contained. The fire, which started 4:45 p.m. Saturday, is located about 40 miles north of Helena near Mile Marker 1 on state Highway 287. It is being managed by the Montana Department of Natural Resources and Conservation.

The Balsinger and Ellis fires are being managed together as the Divide Complex by local staff from the Helena-Lewis and Clark National Forest, neighboring forests, and Montana Department of Natural Resources and Conservation.

On Sunday the Meagher County Sheriff's Office posted that a pre-evacuation notice had been issued for the Smith River corridor from Camp Baker to the confluence with Blacktail Creek.

"The Ellis Fire has strong potential to spread north and/or northeast," the notice said.

Local, state and federal fire crews battled a series of lightning-ignited fires in southern Musselshell and northern Yellowstone counties over the weekend and into Monday that have burned over 27,000 acres.

Three fires — dubbed the Musselshell-Yellowstone (MY) complex fire by the Northern Rockies Incident Management Team—were each at different levels of acreage burned and containment Monday morning. The Western Road fire had consumed 905 acres and was 55% contained; the Musselshell Trail Road fire had grown to be the largest of the three fires at 22,481 acres and was 43% contained; and the most active of the fires as of Monday morning was the Peterson fire, which had scorched 4,369 acres and was 0% contained.

The complex had six crews consisting of 298 personnel on site. They were supported by 28 engines, five water tenders, 3 bulldozers and 1 helicopter as of Monday morning. Air support grew throughout the day with a number of helicopters, reconnaissance and command aircraft and tankers making runs across the three fires.

Looking back on the history of space exploration

Looking back on the history of space exploration

A 68-year-old Butte woman was seriously injured in a dramatic crash on I-90 in the city Sunday morning.

An Oklahoma man says it started over a Montana man’s slights about Oklahoma football and cowboy boots.

Stan Strizic stood Tuesday evening with a group of firefighters stationed near his home off the Pioneer Mountains Scenic Byway south of Wise River.

Boxing, beer and bikes at ‘Brawls and Kickstart Days’

The “Brawls and Kickstart Days” festival will take place Friday and Saturday, July 30-31, at the Butte Depot, 818 S. Arizona St.

A look back at Butte's past summers — the highs and lows

We all have our favorite time of year.

An aerial view of the Alder Creek Fire is seen from Wise River.

Vic Sandau, a resident near Lolo, reads information on the Lolo Creek Fire on U.S. Highway 12 on Sunday.