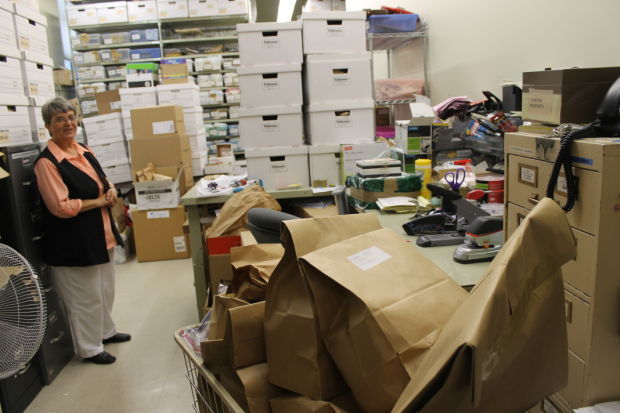 Jan Stepan, who oversees Butte police's evidence, receives about 20 pieces to log each day. The objects range from guns to DNA samples to beer bottles. 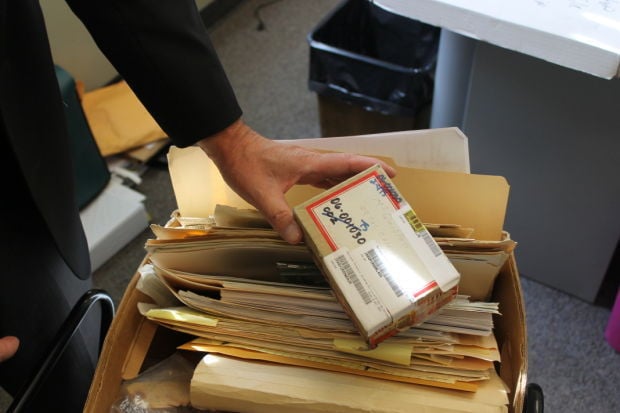 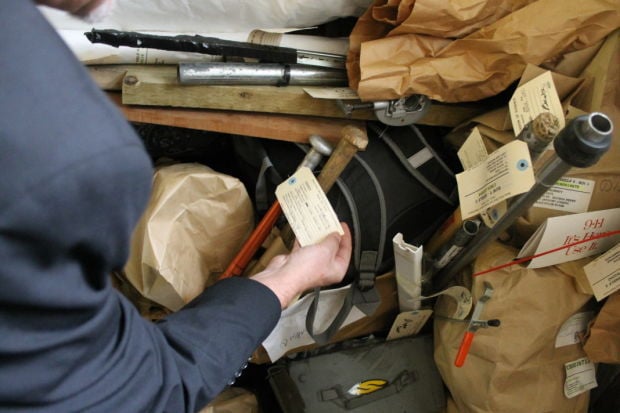 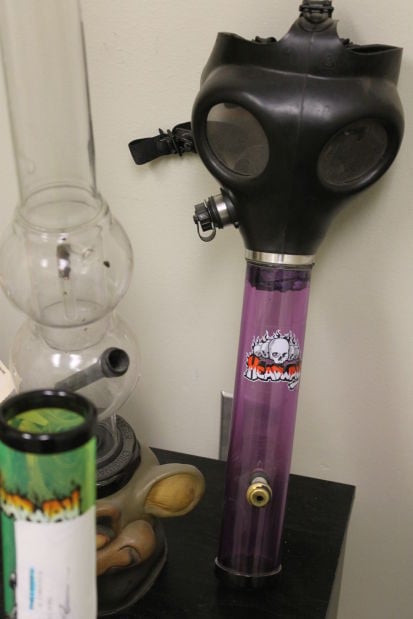 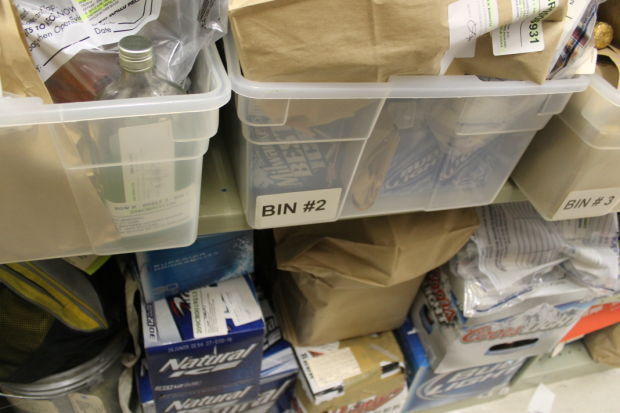 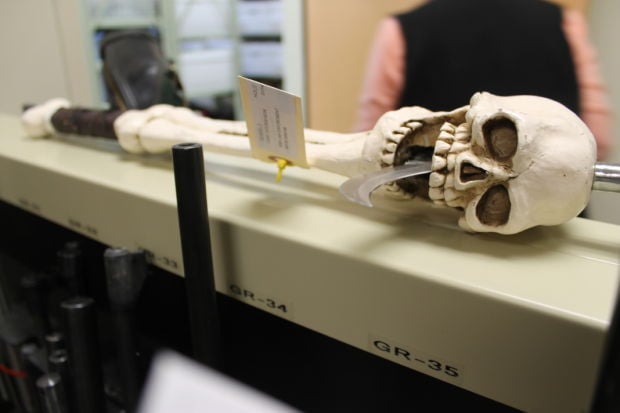 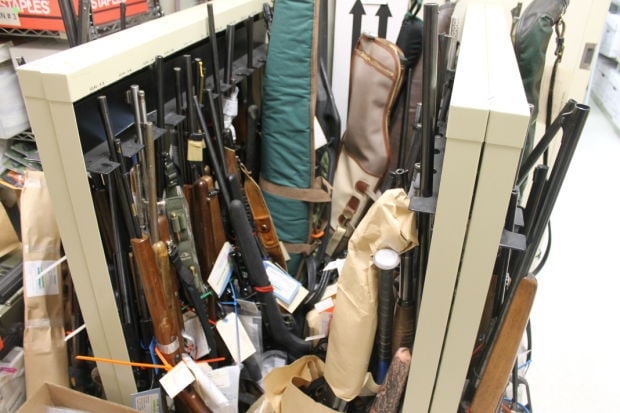 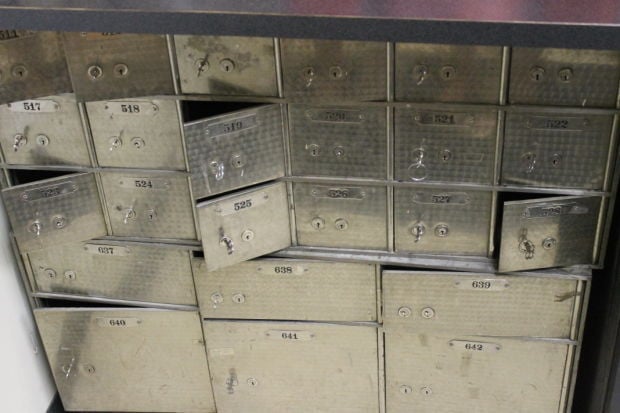 Jan Stepan knows about the skeletons in Butte's closets.

She has a skeleton or two of her own. Stepan also has assault rifles, meth and Natural Ice in her collection as property and evidence technician for Butte-Silver Bow police.

Some of the items are crass enough to make her blush. Others are heartbreaking such as crime-scene photos.

"There's a lot that's really disturbing, too," Stepan said while gazing at her heaps of evidence collected over the years.

Something as simple as a brown lunch bag can spark emotion.

It can serve as a reminder of the humanity in all evidence collected by police. When the lunches were collected from a plane crash outside of Butte, this was definitely the case -- as were the suitcases that still reeked of jet fuel.

"It's really emotional for us, too," Stepan said. "It's just hard to deal with sometimes."

Just as police don't know what they'll collect during a shift, she never can guess what she'll receive. Officers collect enough to fill about 20 paper bags with evidence daily.

Stepan, who has worked with the police for 30 years, knows she'll get audio recordings. About a dozen CDs and DVDs a day is her general haul. That serves as the largest bulk of the items.

"The volume of evidence we bring in is ridiculous," Butte-Silver Bow Sheriff Ed Lester said.

After that, there's the regular shoplifted clothing and bongs confiscated. Part of the evidence room, which is filled to the ceiling with boxes, looks like a liquor store. Case after case of Bud Light and other brews line the shelves.

Then, there's the weapons room. Rifles line one wall and pistols are piled on the other. Medieval-looking swords rest next to homemade weapons.

Everything from a bottle of malt liquor collected from an underage party to the knife used in a murder has to be secured, identified and cataloged.

Even with evidence brimming in the room and spilling out into other parts of the police station, Stepan is quick to find needed objects.

How long items are kept depends on the scenario. Cold case evidence is filed indefinitely.

Some of the oldest items are from a 1965 murder that remains unsolved.

The objects collected from a few locations after the bullet-ravaged bodies of two Butte women were found partially burned near Big Butte fill many boxes and their own locker. Police continue to look into the deaths of mother Marjorie McQuiston and her daughter Nancy McQuiston. In April 1965, police found their bodies a few days after locating bullet holes and bloodstains in their Butte home.

Investigators never know when they'll find a break in the case.

Evidence collected at the scene of a murder and other locations was kept for five years before charges were filed against the suspect.

Testing technology is ever-changing. Earlier this year, prosecutors charged a former Butte man accused of beating his father to death with a baseball bat in 2008.

Police say forensic testing connected the killing to Adam Hatfield, who is awaiting trial for deliberate homicide in his father's death.

Evidence is used for not only local cases but also elsewhere.

In the office of Lt. Butch Harrington, the detective in charge of cold cases, sits a bulletin board pinned with various photos and paperwork on a missing woman from Alaska gone since February 1990. Someone in Butte has knowledge about the mysterious disappearance of Sheri Lynn White, he said.

Harrington urges anyone with information on any cold cases to call police, 406-497-1120.

One unsolved mystery has been hanging around the evidence room so long, he has a nickname. Police haven't been able to find his real name.

"Billy Bones" is a well-known figure around the police station. The skeleton has been in the evidence collection for decades. The skull and other bones were found near Homestake Lake and remain boxed and tagged.

Detective Butch Harrington has a large collection of items from a cold-case 1965 murder of two women. Some of central evidence is the .22-caliber shell casings shown in this photo.

The casings are from the shooting deaths of a mother and daughter whose bodies were found partially burned near Big Butte.

Objects and other evidence collected in what remain unsolved cases will be held at the police station indefinitely or until they're closed. Police ask anyone with information on those cases to call 406-497-1120.

Butte police have collected a vast variety of weapons over the years. Baseball bats are commonplace in evidence. Crowbars, golf clubs and pool cues have also been used in assaults.

Objects like these are kept until cases are resolved. Then they are either returned to the owner or destroyed depending on the circumstances.

An abundant amount of bongs and other marijuana pipes confiscated join an array of drugs. One of the more unique ones is the gas mask bong pictured.

As for the drugs, some are sent to the state crime lab for identification. This is mainly done with suspected methamphetamine.

Once the case is completed, the drugs get incinerated by the local task force every so often. Prescription drugs are sent to the DEA for destruction.

Alcohol confiscated in beer runs and parties lines the shelves in the evidence room at the Butte police station. Half-empty bottles of Thunderbird are logged next to pints of vodka.

No top-shelf bottles could be seen in the stacks.

The booze is destroyed once the adjoining case is resolved.

Many unusual weapons are housed at the police station. This skull battle-ax is among a copious collection of samurai swords, Medieval weapons and other blades.

If the object is in itself illegal, it will be destroyed. Otherwise, it can be returned to the owner in a case such as burgled goods.

Rifles and other guns are a large part of the evidence collection.

One tip about firearms from police is to document the serial numbers in case they're stolen.

"If you don't have the serial number, I can't tell if it's yours or not," said Detective Butch Harrington. Then you can be reunited with your item if it's logged into the national crime database.

The same is true for laptops, televisions and other high-ticket merchandise.

Each piece of evidence starts its journey in a secured locker. Police officers put the items there to await processing.

The objects are then tagged with descriptions and other information and logged into the evidence collection.

This includes anything bio-hazard such as bodily fluids.

Biden arrives in Geneva ahead of Putin meeting

Biden arrives in Geneva ahead of Putin meeting

Judge scolds Butte counselor before sentencing her for Medicaid fraud

The Willow Creek Fire that ignited Wednesday afternoon 6 miles southwest of Three Forks was human-caused, according to the Jefferson County Sh…

Jan Stepan, who oversees Butte police's evidence, receives about 20 pieces to log each day. The objects range from guns to DNA samples to beer bottles.