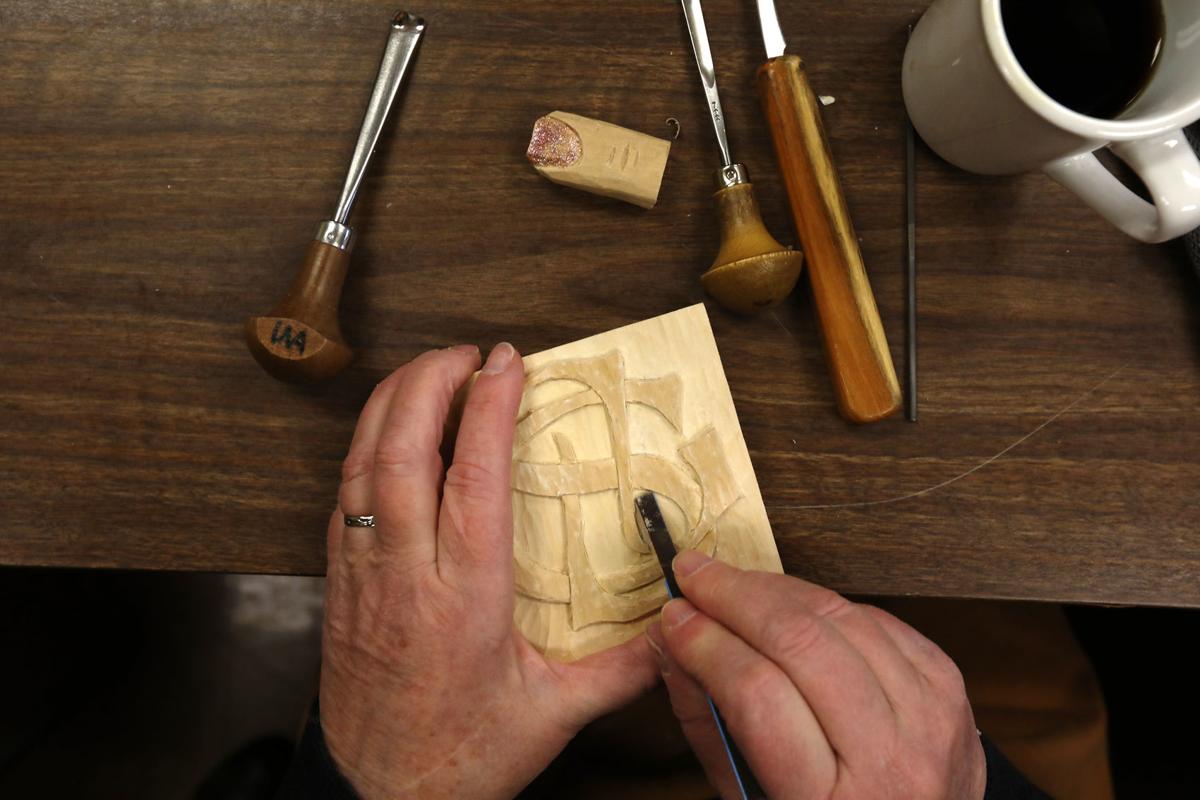 Una Schlaebitz carves a symbol for an Irish band on Thursday morning at the Belmont Senior Center in Butte. 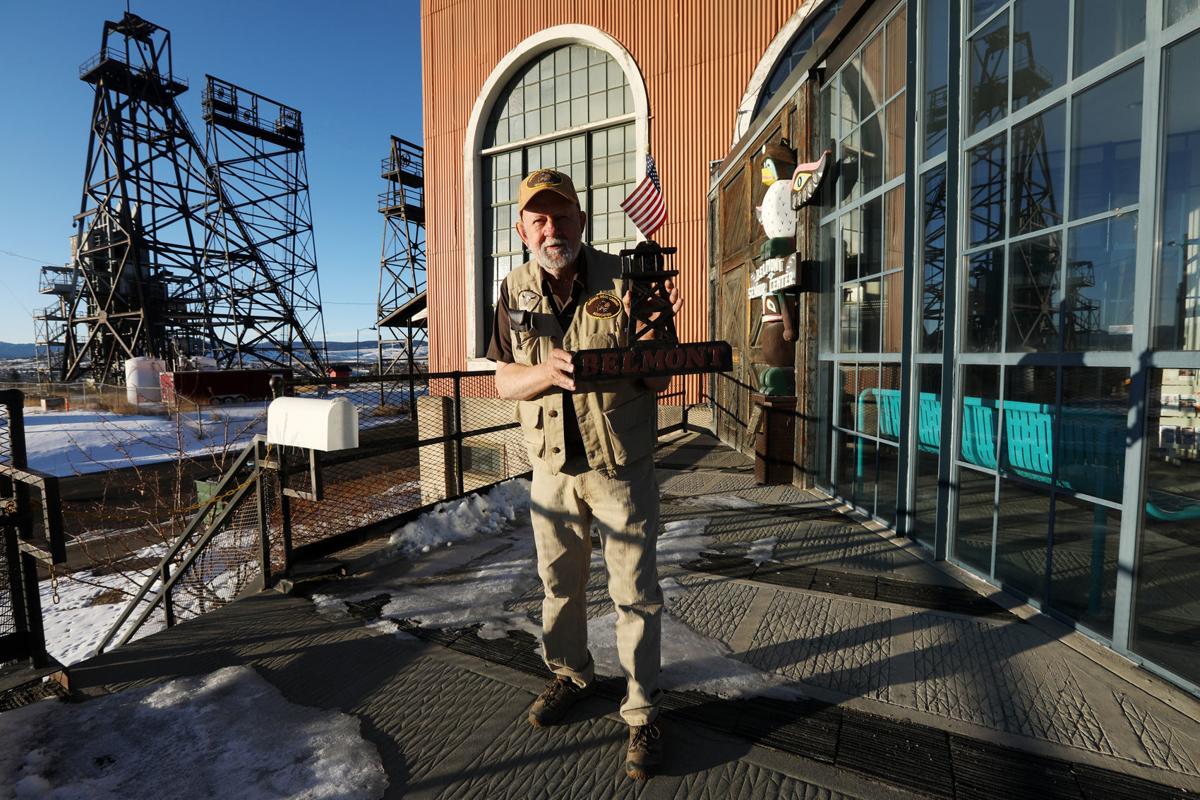 Percy Craddock, a woodworking instructor at the Belmont Senior Citizen Center, holds a small replica of the Belmont headframe that he and his class made for the local senior center. 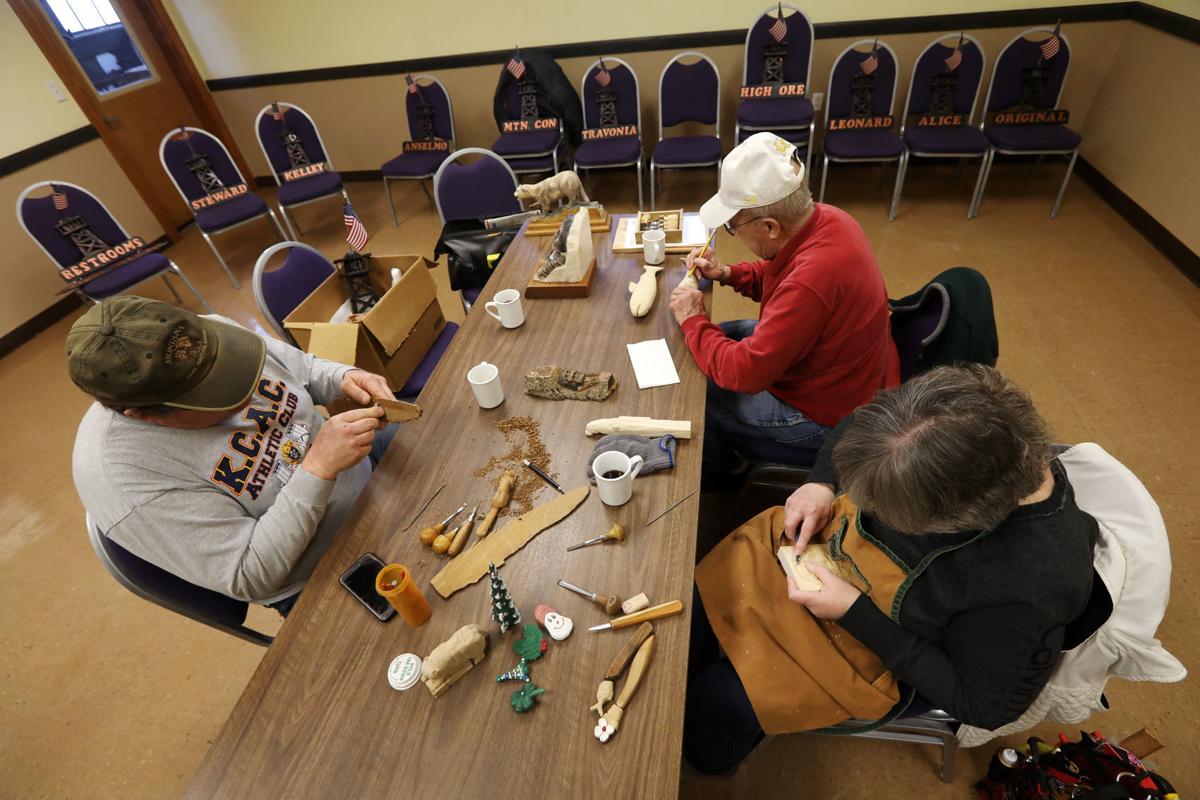 Butte seniors participate in a woodworking class Thursday morning as finished replicas of Butte headframes rest on chairs waiting to be hung on the walls of the Belmont Senior Center in Butte.

On Thursday morning, woodcarving instructor Percy Craddock led a group of four seniors on carving projects that brought smiles to their faces and stories to share.

Craddock, 84, has been teaching woodworking for 50 years. After serving in the Army during the Vietnam War, he enrolled at Western Montana College to major in industrial arts and education.

“I went to become a teacher because I like working with people,” said Craddock, who spent the bulk of his career teaching carpentry at Butte High School. After teaching at the high school level from 1972 to 1998, he went on to become an instructor for adult education classes. “Dealing with adults is easier than dealing with high school sophomores.

Craddock said he turned his focus to woodcarving when his wife was diagnosed with multiple sclerosis. “I had to spend more time at home because my wife got sick, so I set up a little space to work on carving,” he said.

That’s when his carving projects “really took off,” he said.

“I enjoy woodcarving because its a media that requires different skills as far as using your hands. There’s lots of things about it, and it’s very rewarding when you finish something that took you a while to create.”

For Craddock, every carving has its story. He said he’s most proud of a bust he carved after John F. Kennedy, his favorite president. “I did an immediate carving of JFK when he was killed, and I’m really proud of how it turned out,” he said.

To share his love of the craft, Craddock teaches a weekly woodcarving course through the adult education program at Butte High School on Wednesday evenings. He also leads a group of four to six woodcarvers on Thursday mornings at the Belmont Senior Center. The consistency provided by the location allows the group to meet weekly and build camaraderie.

Among those who found a home with the carving group is Louis Loushin. A former mine worker who operated lifts at the Belmont Mine, the 94 year-old is one of Craddock’s longtime students.

“I’ve been carving for about 20 years. I started carving at the high school under Percy, but I don’t know how it started, really,” Loushin said, as he carefully worked his chisel into a piece of basswood resembling a fish. He said it was Craddock who helped him discover a hidden talent that’s kept him busy since then.

When asked about what he enjoys most about woodcarving, Loushin said “everything. I enjoy everything about it”

“It’s something to do, a relaxing pastime. And you get a lot of information from all the guys you’re carving with — they tell you all about what’s going around town, just like the newspaper,” said Loushin.

Next to Loushin, Una Schlaebitz was carving out the logo design of her son’s favorite band, Gaelic Storm, on a piece of wood that she envisions to be a lid to a wooden box. When asked what got her started in wood carving, she said she wanted to be able to make her own Santa Clauses.

“I was living in Missoula and there was a lady who carved Santa Clauses and I really wanted to learn how to do that,” said Schlaebitz, a Butte native. She said she took up woodcarving at a Ben Franklin Crafts store in Missoula and continued the craft when she moved back home. “I saw that they offered woodcarving for adult-ed at the high school, and now I’ve been doing it here for five years.”

Schlaebitz said she still continues to make “lots of Santas,” which she gives away as gifts for important people who’ve touched her life in special ways. “You go through life and there’s so many people you meet that have done nice things for you and have been good friends,” she said.

Sitting across the table, Regan Dean quietly chiseled lines on a piece of thin wood to transform it into a feather. The 60 year-old state game warden took up woodcarving in 2004 to try something new and artistic.

“I’ve always liked doing art stuff. But my neighbor had a woodcarving set, and he let me borrow his tools. So I started doing it and I liked it,” said Dean. “I just like being creative. Every time you start a project, your mind has to be creative about how you’re going to take the wood away from it.”

The group of woodcarvers recently finished a series of miniature headframes to hoist up over each doorway in the senior center. Each carved headframe is painted and given a name to represent a former mine.

The next group project will be what Craddock calls the Belmont War Memorial.

Una Schlaebitz carves a symbol for an Irish band on Thursday morning at the Belmont Senior Center in Butte.

Percy Craddock, a woodworking instructor at the Belmont Senior Citizen Center, holds a small replica of the Belmont headframe that he and his class made for the local senior center.

Butte seniors participate in a woodworking class Thursday morning as finished replicas of Butte headframes rest on chairs waiting to be hung on the walls of the Belmont Senior Center in Butte.