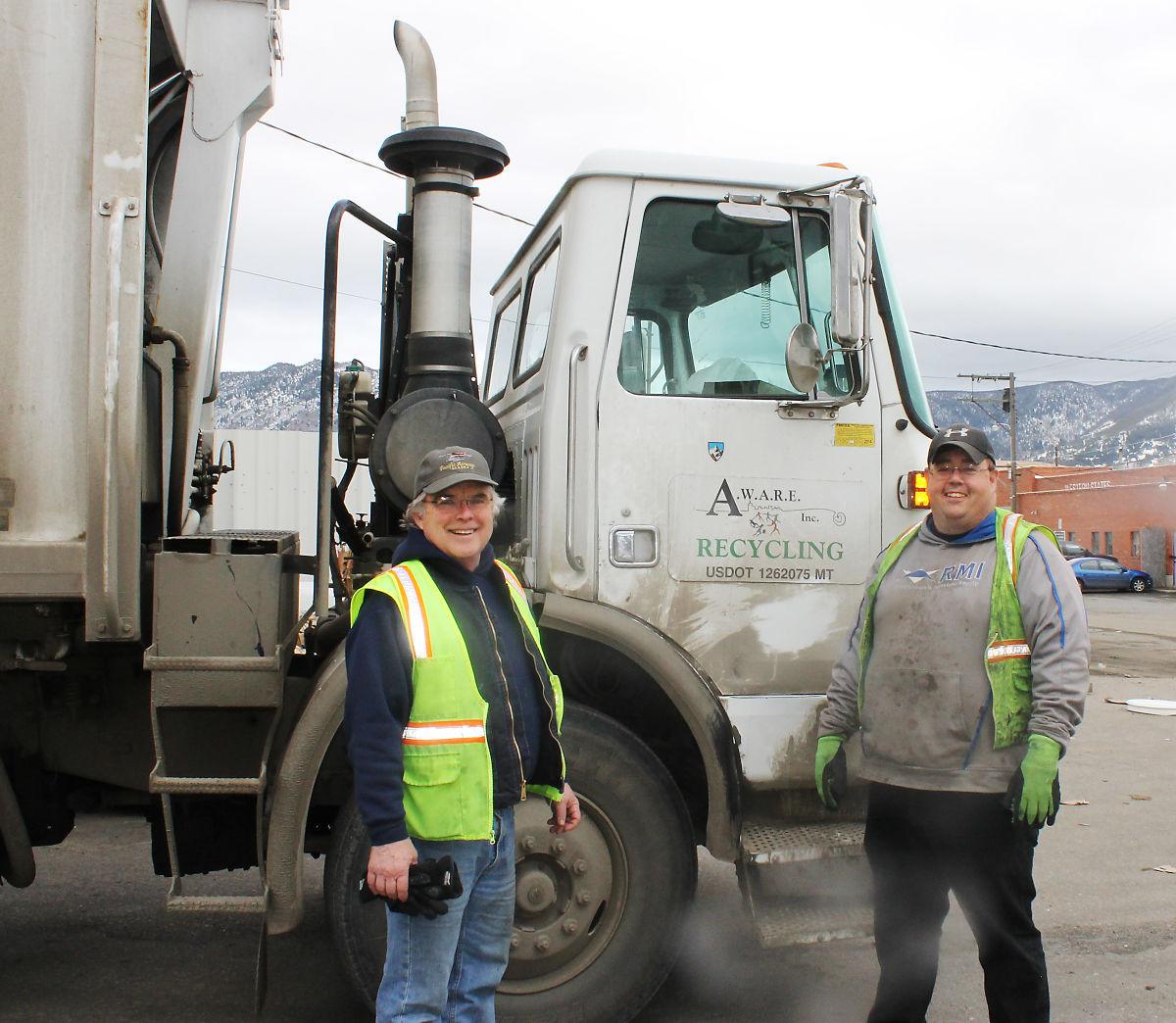 John Cote, left, who oversees AWARE’s Butte recycling operations, shares a break with Mike Luanes, who drives the truck seen in this photo to pick up recyclable materials that businesses contribute to the program. 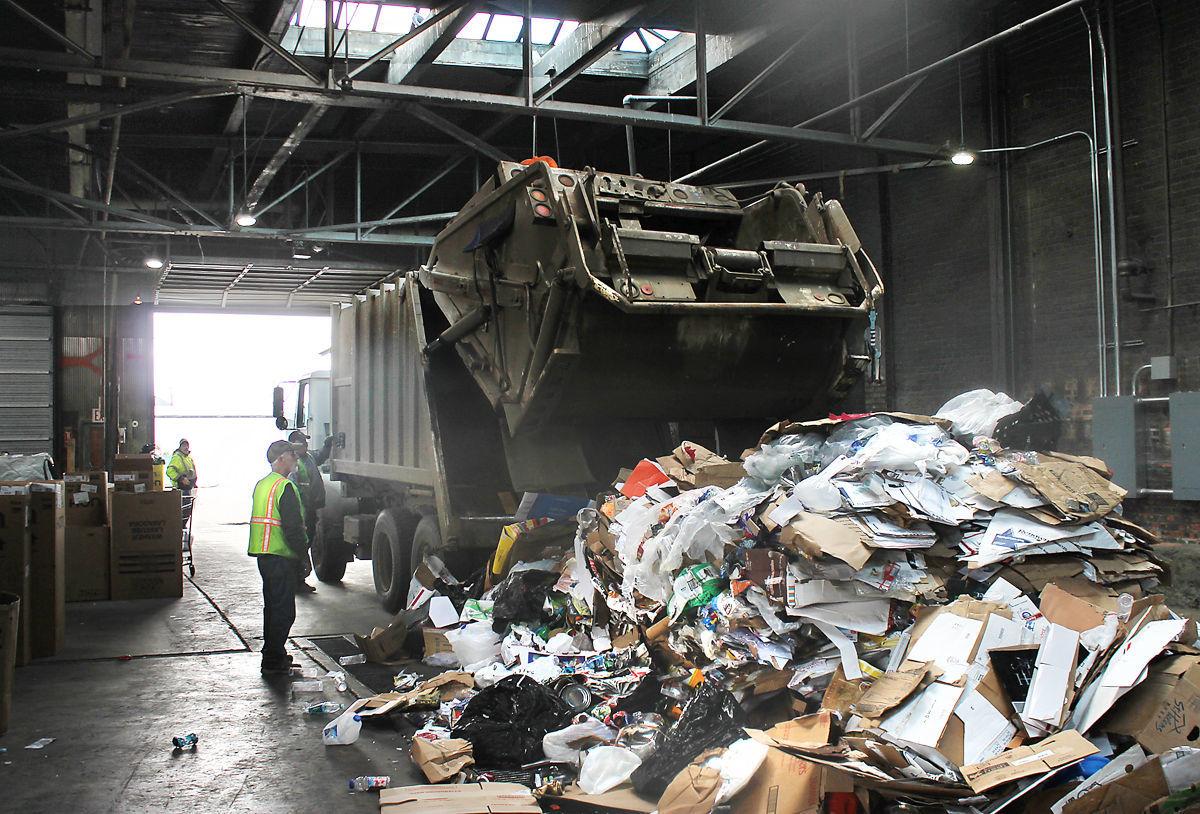 The guys who work at AWARE’s recycling center in Uptown Butte come across all kinds of things in the tons of material they take in weekly.

Things they can’t do a thing with.

On a recent Friday, usually the busiest day of the week at the center at 640 S. Arizona St., foreman Bob Whitaker kicked open a bag full of only rotten food, coffee grinds and beer bottles. In other words, someone just chucked their regular garbage into a community recycling bin.

“During the Folk Festival and Evel Knievel Days, we got a lot of food,” Whitaker said. “We got a bag of nothing but pork and beans one day.”

They take it in stride, however.

“It’s our job to educate people on what is and what isn’t recyclable” Cote said.

Recycling is still pretty new to Butte, especially curbside pickups that were part of a pilot program last year. Now, any household in the solid waste district covering most of urban Butte can sign up, receive a large bin and have their materials collected every other week for an extra charge on top of their trash fees.

McGree Trucking has been rolling out a new curbside program in which households put their garbage in 95-gallon bins that are lifted and dumped into trucks with automated arms. About 6,800 of 12,567 households are under the new program, and all should be by mid-June.

But under an arrangement between McGree and AWARE, anyone in the district can get a recycling bin now and have the materials picked up and taken to the processing facility.

Cote said nearly 300 households have opted into the voluntary recycling program so far, each paying $15 a month for the service. AWARE, a non-profit corporation that provides community-based services for people with mental, emotional or physical disabilities, has eight disabled workers among its staff at the Butte recycling center.

AWARE hopes to increase the number from 300 to 2,000 over time, in part through planned advertising and other reach-out efforts.

But you don’t have to sign up for curbside service to take part in recycling.

Besides its walk-in business at 640 S. Arizona Street, AWARE has community sites at Platinum and Excelsior, the Civic Center, 1340 Harrison Ave., and the National Center for Appropriate Technology, 3040 Continental Drive. Each site has four large bins where people can drop off cardboard, plastic and paper 24 hours a day.

Cote said some people in Butte — many of them seniors — have become avid recyclers. Some stop by the center with tiny contributions — just a magazine or two, for example.

Mike Luanes, who spends most of his days picking up recyclable material from businesses in town, said many of those folks grew up in the World War II era and learned to save things and stretch resources.

Some people know generally what can be recycled: cardboard; newspapers, office paper and shredded paper; aluminum beverage cans and tin cans; and plastic containers such as milk and soda jugs and those for detergents and other liquid products.

They know what can’t be recycled — not at the AWARE facility, anyway: glass of any kind, including beer bottles; heavy metals, such as the car parts and the lawn mower Cote mentioned; wood, be it boards or branches; leaves and lawn clippings; and electronics of any kind.

But there are a couple of categories of people AWARE is especially trying to educate.

“There is the hopeful recycler who thinks everything is organic and recyclable, so just throw it in,” Cote said. “Then there are those who just don’t know what is allowed. Those people we can educate, and that is our responsibility.”

There’s a third category, too, and there’s little that can be done about them. They are the ones who dump anything into the community bins for convenience and without thought.

“They are the same ones who dump a couch behind the M,” Cote said, referring to the big hill behind Montana Tech.

Somebody uses the bins off of Continental Drive to drop off empty Bud Light bottles week in and week out. AWARE can’t do anything with them and tries to pick them out at the center, even from material that is processed without sorting.

Most of the material from the community bins is baled as “single stream” because it takes too long to sort it. AWARE has to pay contractors to pick it up and transport it to giant processing centers, most of them outside of Montana.

They lose money doing that, but it’s a necessary part of operating this kind of recycling operation, Cote said. But contractors will stop taking the material if it regularly contains too many items that can’t be recycled.

Most material that is dropped off at the center or collected at businesses is sorted and can be sold for a small profit, depending on the commodities market. About 80 percent of the haul from businesses is cardboard.

Aluminum cans also can be sold directly and the center pays 30 cents per pound for those. It takes about 30 cans to make a pound.

Cote said many people who drop off cans decline to take money for them, preferring AWARE keep it to help cover operating costs. Those costs still outpace revenues.

But that gap is closing because of the curbside service and Cote hopes recycling in general will become more popular the more people know of it. He’s impressed with the community response so far.

“We are getting there, and we are getting there because of some of the moves we have made,” he said. “It is becoming more sustainable every day. It’s still not break-even, but then factor in our mission, which is to give these guys jobs.

“We have eight disabled people who are working, and you know, that is our mission,” he said. “A for-profit corporation couldn’t do that.”

Here are products that can and cannot be accepted in the new recycling program n Butte. AWARE can answer any questions at 406-723-3406.

Shredded paper — bagged, white office paper only; do not shred newspapers or magazines

Plastic — can accept clear plastic such as water and soda bottles, plastic milk jugs, detergent bottles, and other containers that display the #1 PETE or #2 HDPE symbols; plastic garbage bags and grocery bags are also acceptable; please make an effort to remove and dispose of caps from containers

Glass of any kind

Food containers of any kind

Metals (of any kind other than aluminum cans)

Roll-outs ahead: Recycling program starting, big changes in trash collection on the way

There might be glitches here and there, maybe accommodations needed for this household or that or directions specific to some of the alleys in town.

Debate on garbage, recycling rages on; vote coming in 2 weeks

Walkerville residents will decide in the coming weeks whether they as a community want the same garbage-collection service and uniform, 95-gal…

Two-year mark: Looking back — and ahead — at trash collection, recycling in Butte

AWARE Inc. is shutting down its recycling operations in Butte, citing a combination of state budget cuts and a “catastrophic drop” in recyclin…

John Cote, left, who oversees AWARE’s Butte recycling operations, shares a break with Mike Luanes, who drives the truck seen in this photo to pick up recyclable materials that businesses contribute to the program.