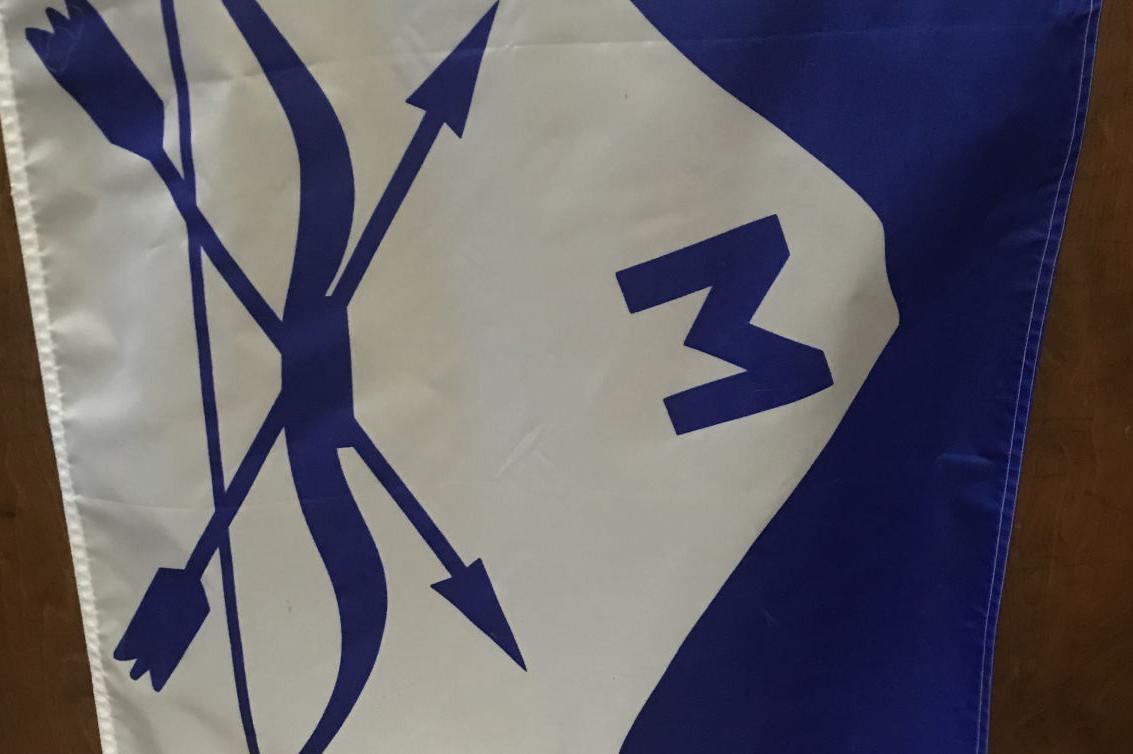 Readers were quick to deliver details on the origins of this Butte-Silver Bow flag. 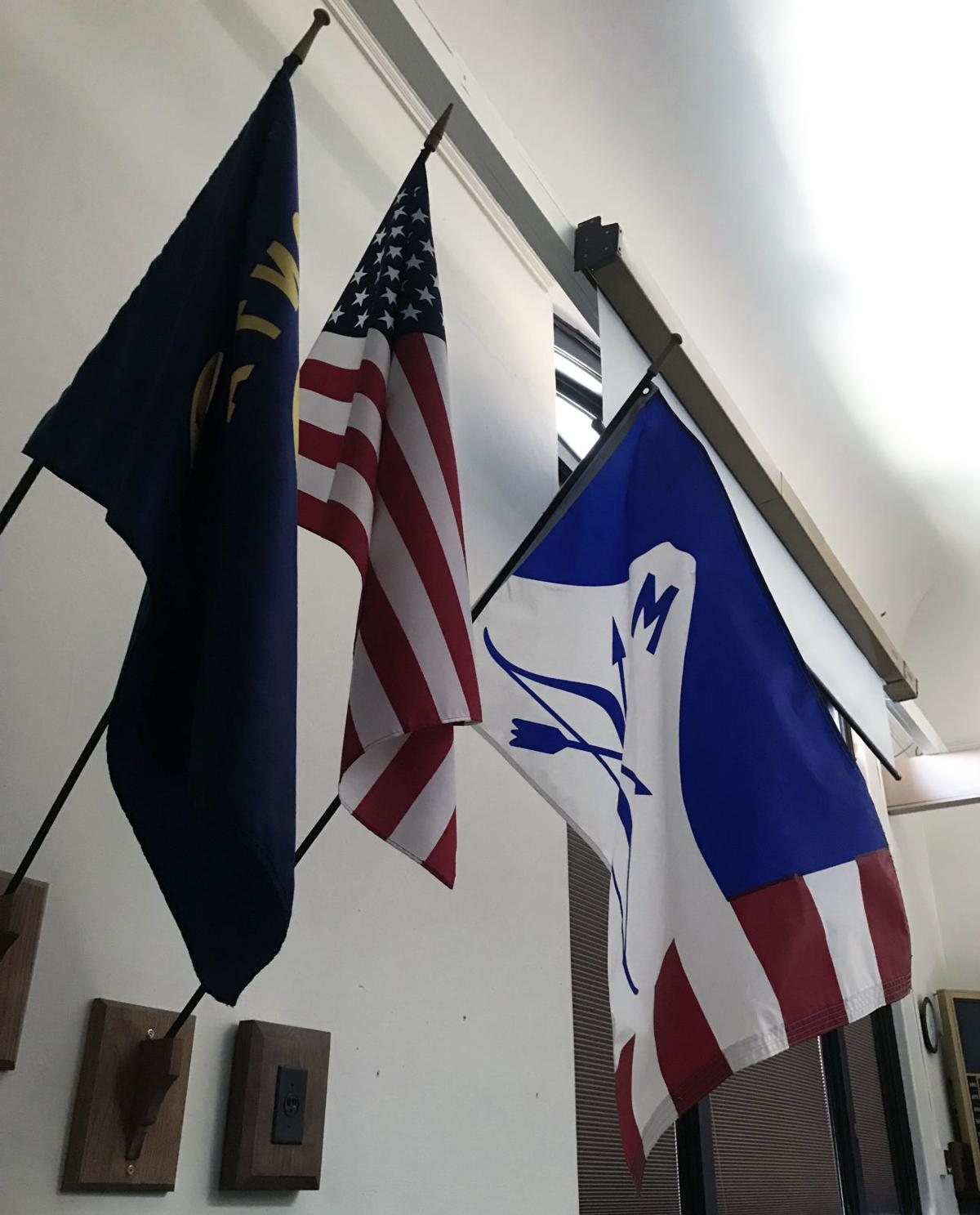 These three flags, from right to left, hang in council chambers in Butte and represent the state of Montana, United States and Butte-Silver Bow. The latter was designed by the late Butte businessman Don Cianca in 1989.

It didn’t take long for explanations of an apparent Butte-Silver Bow flag to emerge.

After a Sunday story about that flag and a newly proposed contest to have one designed and “officially” adopted, readers of The Montana Standard came forward with word on how the existing one came to be.

Several current and former county officials, including one who had worked at the courthouse for decades, said last week they couldn’t recall the flag’s origins. One hangs in council chambers and there’s a bigger one in the chief executive’s office.

The first notice of its origins came by email from a woman in Spokane, Washington. She was reading the Sunday edition of The Standard and recalled it being designed by Don Cianca, a Butte businessman who won a contest for it years ago.

Cianca died in 2004 at 71, but sure enough, there is mention of the flag in his obituary.

“In 1989, his design for the Butte-Silver Bow official flag was adopted,” it said. “The logo for the “We Love Butte” and route sign design for World Museum of Mining are also among his designs seen locally.”

Cianca’s son, Bob, who lives in Butte, said Monday that his father won a contest sponsored by the Butte-Silver Bow Chamber of Commerce in 1989 and Don Peoples Sr., who was chief executive of the city-county at the time, endorsed the flag.

Peoples says he vaguely remembers the flag but none of the details about it. The flag is red, white and blue, has a rolling hill with an “M” on it and a bow with two arrows that crisscross.

Bob Cianca said his father lived in Chicago but moved to Butte in 1969. Don Cianca loved Butte, his son said, in part because — like Chicago — there were so many people with different ethnicities living close to one another.

“They all got along and identified as a group,” Bob Cianca said. “They put Butte first.”

According to a small article located Monday in the Standard’s archives from 1989, the flag’s “M” was on Big Butte and honored Montana; the red-and-white stripes honored the United States.

The contest was sponsored by the Chamber in conjunction with Montana’s centennial celebration, according to a 1988 article. That one said the chamber’s military committee conducted the project on behalf of the Council of Commissioners.

But it’s still unclear if the council ever formally adopted it.

Linda Sajor, a deputy chief in the clerk and recorder’s office, said she combed through council records dating back to 1977, when the city and county consolidated, and could find no resolutions adopting this or any other flag.

He suggested a contest be held and residents be given 45 days to submit designs for a flag. They would all be put online and citizens would vote for their favorite. The voting would be open for seven days.

Then the top three would be put before commissioners and they would decide which one would represent the city-county of Butte-Silver Bow —officially.

Larson, who now lives and teaches in the Persian Gulf island nation of Bahrain but returns to Butte in the summers, said Butte has more pride than any city in Montana and should have its own flag. It would be a symbol of pride, he said, and could be flown at community events.

On Monday, after Larson had learned of the existing flag’s origins, he suggested that commissioners still formally vote on a flag so it’s official. They might want to “officially” adopt the one designed by Cianca, he said.

“That would give them a chance to re-honor what Mr. Cianca did,” Larson said.

Commissioner Michele Shea said last week that she liked the idea of a flag contest, saying it would get the public and art community involved in a project to show community pride.

Besides, she said, “It’s positive and lighthearted and we could use more of that in the world today.”

She said Monday that she was grateful people came forward about the origins of the existing flag. It wasn’t surprising that local officials didn’t know about its origins, she said, because it doesn’t appear to have been formally adopted by local government.

“Perhaps now is the time to make it official,” she said.

He was a member of Butte Lodge 22, A.F. and A.M., Scottish Rite Bodies and Bagdad Temple of the Shrine. His wife, Mary Ann, still lives in Butte.

If a Butte-Silver Bow flag that’s been around for years was never official before, it is now.

Readers were quick to deliver details on the origins of this Butte-Silver Bow flag.

These three flags, from right to left, hang in council chambers in Butte and represent the state of Montana, United States and Butte-Silver Bow. The latter was designed by the late Butte businessman Don Cianca in 1989. 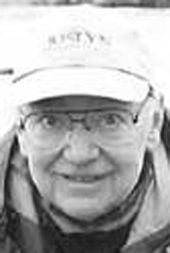