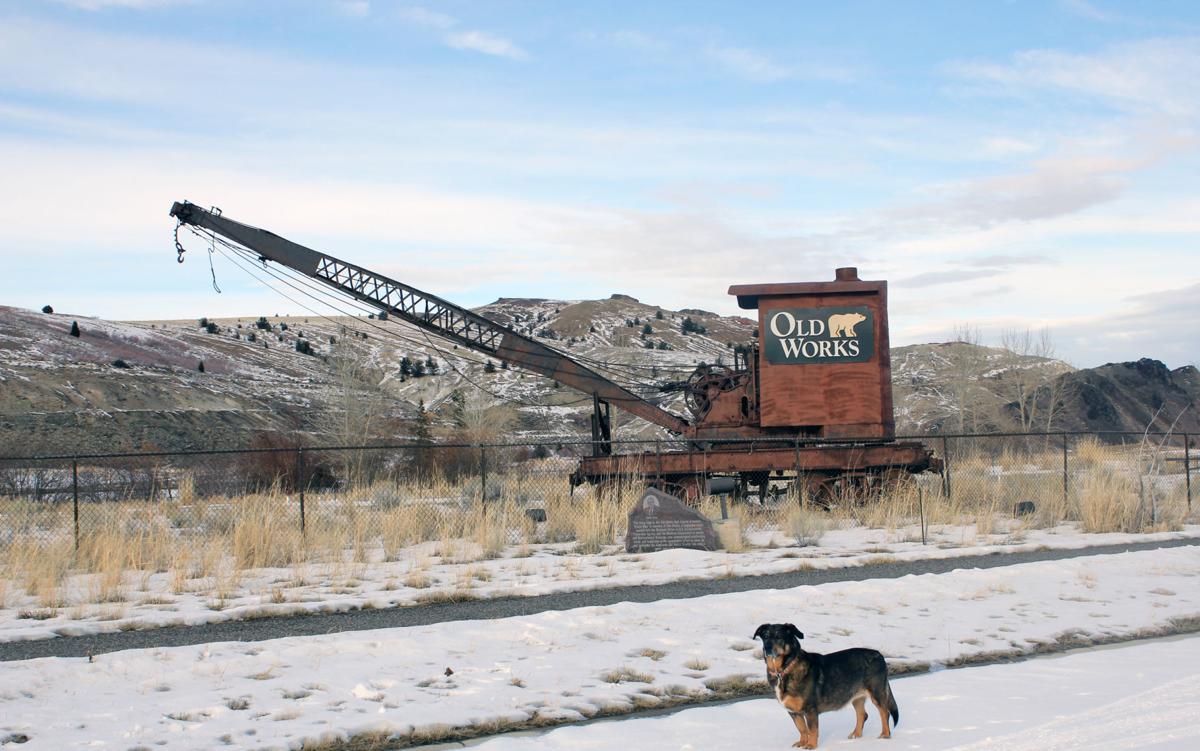 A dog stands at attention in front of the Old Works Golf Course sign, which greets visitors as they drive up to the Jack Nicklaus-signature course. In the background is Stucky Ridge, where a fervent storm last summer caused extensive flooding of debris and contaminated sediment to wash down and cause considerable damage to the golf course, which led Old Works to lose money. The golf course authority board is requesting a 10-year subsidy from Atlantic Richfield to stabilize financially. 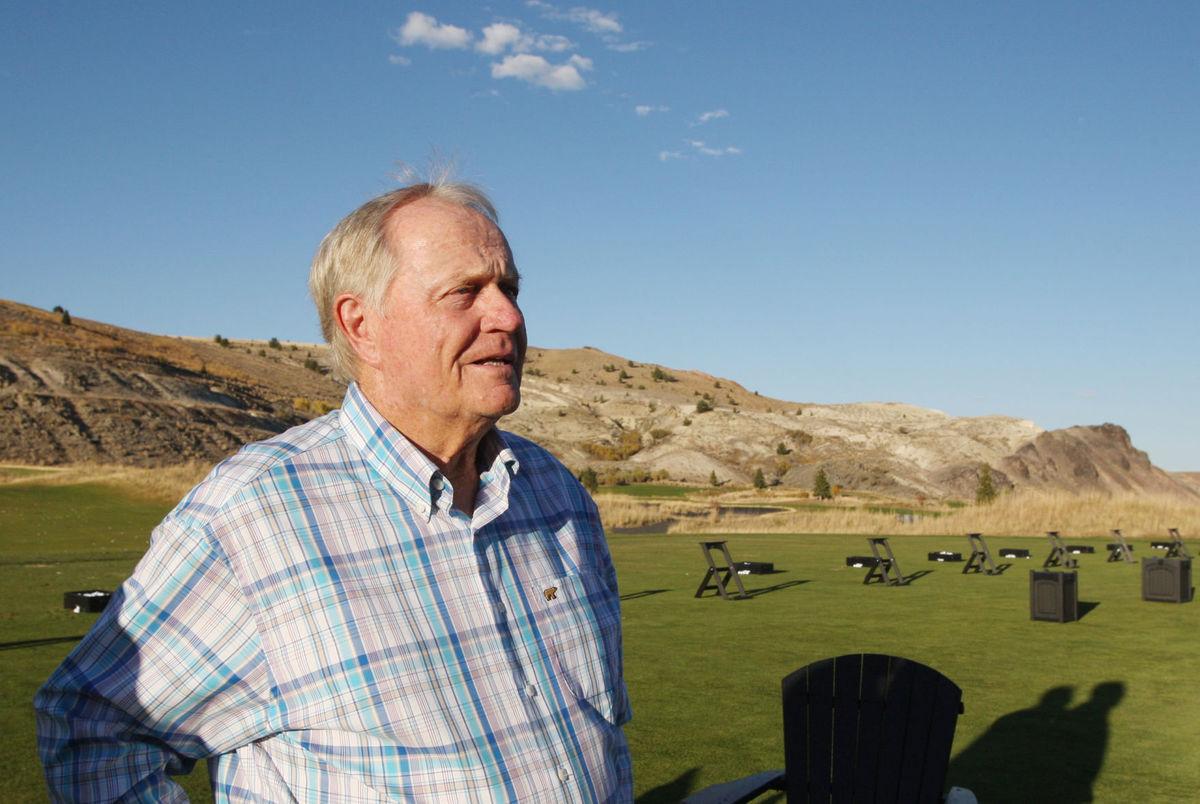 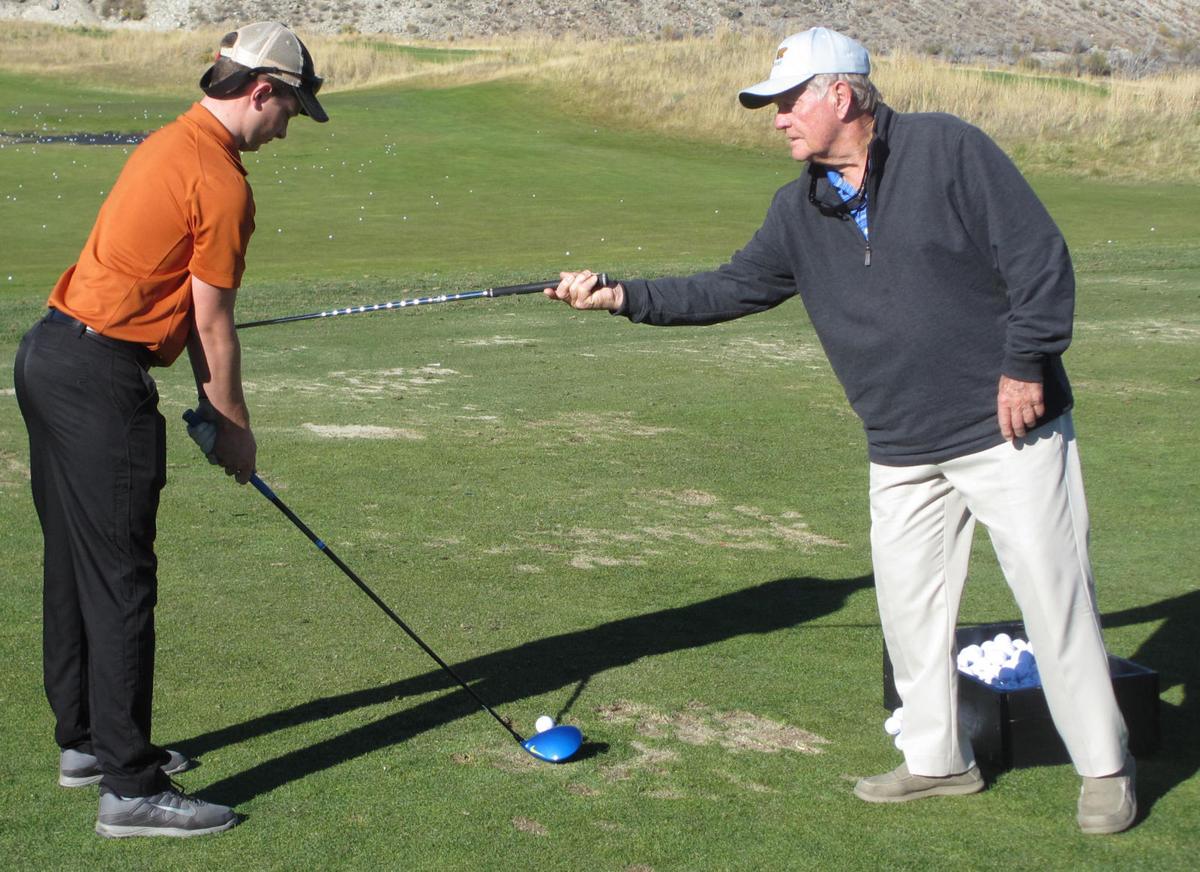 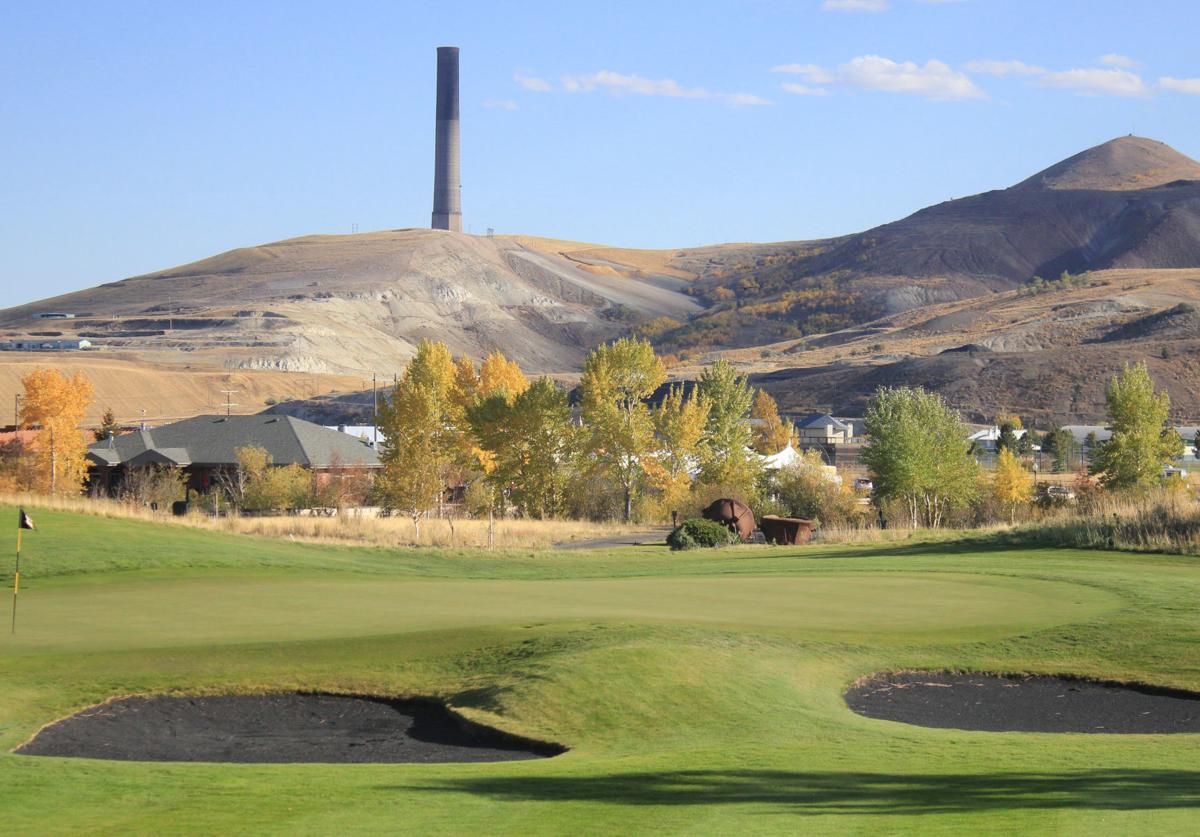 Old Works Golf Authority Board sent the 10-year plan, which projects annual subsidy needs for each year, to Atlantic Richfield Company. The company, now part of the oil giant BP, is responsible for Anaconda's more than 300-square-mile Superfund site due to nearly 100 years of smelter emissions. Atlantic Richfield has not responded yet to the request.

The Jack Nicklaus-designed course suffered a difficult season last year caused by an extraordinary flood that sent three-quarters of an inch of water into town in 22 minutes last July. Sediment, bricks, and debris washed down Stucky Ridge, which has not been reclaimed, and poured out over two-thirds of the course, Anaconda-Deer Lodge County Superfund Coordinator Carl Nyman said last week.

"That's the equivalent to 1,500 visits to the golf course and the community," Nyman explained.

On top of that, Montana had one of its worst wildfire seasons, which strained the state's budget and left residents throughout southwest Montana with compromised air quality for weeks on end.

Atlantic Richfield built Old Works Golf Course in the 1990s as a solution to some of Anaconda's Superfund woes. It acts as a complex cap to control storm water contaminated mostly with arsenic.

But it was also meant to act as a draw to the Smelter City and, therefore, as a boost to a town that hit the economic stop button 37 years ago when the Washoe Smelter shut down operations. The smelter, owned by Atlantic Richfield, smelted Butte's raw copper ore.

The course isn't just any ordinary set of fairways and greens. It's a Jack Nicklaus signature course, designed by the legendary golfer himself. Old Works has been ranked highly as a top-notch public golf course over the years.

More than 90 percent of the golfers it attracts come from elsewhere. That means money spent in the community on lodging, restaurants, and other places.

But the golfers in Anaconda aren't enough — only 8 percent of revenue — to keep the course open, said Mike King, chair of Old Works Golf Course Authority Board.

To keep the course in the kind of shape it needs to be in to attract golfers passionate enough to travel long distances for the sport, it needs to remain top notch. And that costs money, King said.

How the money would be spent

But not every year is expected to be that heavily subsidized. Year 4 is projected to require $90,977 in subsidies from Atlantic Richfield.

How the subsidy would work exactly — if Atlantic Richfield would pay out quarterly, bi-annually, or annually — is a question the golf authority board will have to work out with the company, assuming the company agrees to the deal.

If Atlantic Richfield proves amenable to the concept and final terms are hashed out, both the golf authority board and the Anaconda-Deer Lodge County of Commissioners will have a say by voting on the proposal.

King said he anticipates a meeting with Atlantic Richfield sometime in March to discuss the plan.

Houston-based Atlantic Richfield spokesperson Brett Clanton said via email that the company is "working with the Old Works Golf Course Authority Board and Anaconda-Deer Lodge County to complete repairs of areas damaged by the flood event during July 2017, and to review proposed plans for the golf course in the future. Atlantic Richfield Company is evaluating information provided to it, and has no further comments at this time."

But everyone The Montana Standard spoke to expressed optimism over this new approach to solve the golf course's problems. Nyman said he saw a real team effort on the part of the county and Atlantic Richfield as they came together to solve the issues around last summer's flood. The company paid for "almost everything" the county asked for to deal with the considerable repair work needed and provided a financial subsidy of $460,000 to the golf course to compensate Old Works for the lost rounds of golf, Nyman said.

Everett said the cost to the community for the lost rounds has not been calculated. But if the 10-year subsidy is agreed to, this could make the golf course's future a whole lot brighter.

The problem isn't Montana's short summer season, the wildfire smoke that now eats up a portion of that already short season, or the difficulties of drawing visitors to spend time in a Superfund site.

It's golf itself, Everett said.

"Overall trends in golf courses have been in decline each year," Everett said. "Are we different from anybody else? It seems to be a similar trend, both in the Northwest and across the U.S."

Even the golf equipment industry is struggling. A 2015 report that came out on TaylorMade, a golf equipment brand of Adidas, indicated sales slumped for three years in a row. Other golf equipment manufacturers have suffered as golf as an amateur sport has gone into significant decline.

Old Works has suffered, too. The golf course barely broke even until 2007, and after that year, it began to lose money. About four years ago, Old Works nearly closed because it struggled to meet payroll. For the last few years, the course has been living on a borrowed dime — Atlantic Richfield's. The county has repeatedly taken out loans with the company since 2012 to keep the course afloat and now owes around $1 million to the former oil giant.

But King said Old Works doesn't really owe that money. He said it was always understood that the loans would be forgiven.

"We would never tag our community or our board with debt," he said.

When Everett ran for chief executive in 2016, he campaigned in part on never again taking out loans from Atlantic Richfield for the golf course.

"We don't have the financial capability of carrying those loans, let alone paying them back. Let alone putting the financial responsibility on the taxpayers," Everett said.

An agreement the county reached with Atlantic Richfield in the summer of 2016 provided, among other things, for the loans to be paid back with money the county would receive from Atlantic Richfield. But that agreement was unpopular amongst community members for a host of reasons, led to considerable backlash for county officials, and appears to have been squashed. A new agreement, which would have provided money to the county to cover a variety of issues related to the town designated as a Superfund site, was expected to be unveiled in 2017, but that never happened.

Everett says the new plan, which just focuses on the golf course's needs, is a better approach.

Even despite the many ills that beset the golf course, Nyman said a more aggressive marketing effort last year improved revenue at the course. King said that just before the flood, the course was 300 rounds ahead of budget.

"A lot of these events aren't 100-year events, they're almost every-other-year events, whether it's flood, a forest fire — something comes up and takes our rounds and knocks them down," King said.

Despite the pitfalls, King estimates that the golf course's annual budget is in the neighborhood of $1.2 million. Revenue from Old Works accounts for about 80 percent of that. The hard part is that during the long winter, the course has no revenue stream coming in but still has payroll and other costs.

King said that if Anaconda grows again, it's possible the county would not need Atlantic Richfield's help after this 10-year plan.

But King said it's likely that this would only be the beginning of a long-term solution wherein Atlantic Richfield would need to subsidize the course in perpetuity.

Everett and King both believe the golf course is worth it.

"It's one of the bright spots for the county," Everett said.

Joshua "Teague" Rutherford remembers feeling the drill in his mouth as the dentist worked on his tooth.

On Feb. 6, 1903, Butte residents opened their Anaconda Standard to read a lavishly illustrated report of a lurid killing. The Standard’s five-…

No food, lodging at Glacier's Sperry complex this summer

KALISPELL — Hikers heading to the Sperry Chalet area in Glacier National Park this summer won’t find the popular fresh-baked cookies and ice-cold lemonade at their destination, and chances are visitors will be camping rather than staying in a backcountry dormitory for at least the next two years.

LAS VEGAS — The incoming bishop for the Catholic church in Las Vegas says supporting immigrants and advocating for gun control will be among his top priorities.

Pat Dudley and Ray Rogers have been close friends going on 20 years now, but they had a head start.

Through friendship and a deep desire to leave a legacy to their hometown, two “Butte boys” are establishing a $35 million medical training cen…

A dog stands at attention in front of the Old Works Golf Course sign, which greets visitors as they drive up to the Jack Nicklaus-signature course. In the background is Stucky Ridge, where a fervent storm last summer caused extensive flooding of debris and contaminated sediment to wash down and cause considerable damage to the golf course, which led Old Works to lose money. The golf course authority board is requesting a 10-year subsidy from Atlantic Richfield to stabilize financially.