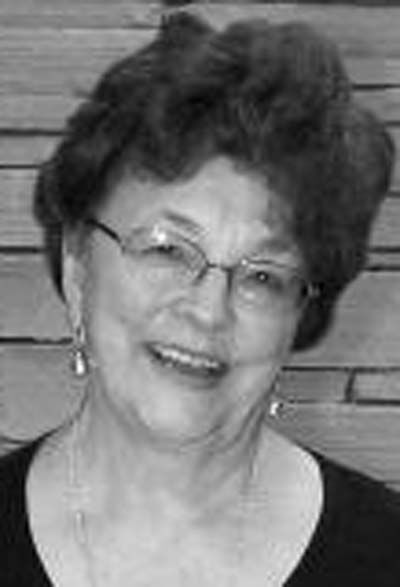 Nellie Rosalyn Midge Sherman (88) of Butte, Montana, passed away in Great Falls, Montana, on June 30, 2020. She is now in the presence of her Lord and Savior, Jesus Christ.

Nellie Rosalyn was born on March 11, 1932, at her family’s homestead on the Bootlegger Trail east of Ledger, Montana. She was the youngest of six children that were born to Robert and Myrtle Midge. She was known as “Nellie” to many, but as “Rosalyn” to others.

Nellie Rosalyn attended Conrad High School and graduated there in 1949. So that she could attend high school, Nellie worked several years at Pondera Drug to help pay rent for the apartment that she shared with her sisters, Marian and Betty.

She attended the University of Montana for the fall quarter of 1950. She was delighted to be selected that fall for U of M’s elite singing group, the Jubileers.

In the summer of 1949, Nellie met her future husband, William “Bill” Baker Sherman. They were married on October 14, 1950, in Deer Lodge, Montana. Nellie completed her quarter at the University of Montana, then she and Bill moved to Wichita, Kansas, where Bill was an aeronautical engineer for Douglas Aircraft. They subsequently moved to Kalispell, where their oldest son, David, was born. After moving to Shelby, Montana, a daughter, Deborah, was born. Bill was accepted to the law school at the University of Montana, so the couple spent several years in Missoula. A daughter, Diane, was born while Bill was attending law school there.

Bill set up law practices, first in Billings and then in Conrad. Three more children were born to them in Conrad: Richard, Susan, and Christopher. Bill and Nellie raised their family in Conrad and Nellie was active in the community. She was President of the Central Montana Chapter of Delta Kappa Gamma, an international society for key woman educators. She was a member of the Conrad Democratic Women’s Club. An excellent bridge player, Nellie loved gathering with friends to play.

Nellie Rosalyn became a teacher for a one-room schoolhouse in 1965. She had a 2-year teaching certificate at that time. In July of 1971, Nellie completed a Bachelor of Science in Elementary Education at the College of Great Falls. She taught at several schools, including Grandview School near Valier, Higgins School near Ledger, Brady Elementary School, and Meadowlark Elementary School in Conrad. Nellie was elected Pondera County Superintendent of Schools and served in that position from 1979-1982. During her tenure as county superintendent, she completed her Master’s Degree in Education from the University of Montana (June 1981).

In 1982, Nellie was selected as superintendent of the elementary school in Sun River, where she was an administrator until 1989. After consolidation of the Sun River Valley Schools, she became superintendent in Dodson, Montana, where she retired in 1995 after 30 years as an educator. She was one of the first woman superintendents in Montana. Many teachers and students have recounted stories of her kind, encouraging and supportive disposition. People who worked for Nellie when she was an administrator said that her leadership style was effective, yet understanding. She would take charge of schools that were not doing well and quickly elevate the educational standards.

After her retirement and the death of her beloved husband, Nellie Rosalyn spent many years living close to her youngest son, Chris, and his family. They lived in Stateline, Nevada, overlooking Lake Tahoe, and then moved to Butte in 2000.

Well-known for her warm and outstanding singing voice, Nellie Rosalyn sang for literally hundreds of weddings, funerals, and special occasions, even state conventions. She sang solos in various community choirs, including solo performances in "The Messiah".

Outgoing, fun loving, and remarkably beautiful, Nellie was the life of the party! She had many close friends and was known for her positive attitude. She was generous and freely shared her resources with many. She passed on her love of music to her children. She was proud of her family and often commented on how much she loved her children and grandchildren.

A memorial service is planned; date and location will be announced later in the Montana Standard and the website of O’Connor Funeral home, OconnorFuneralHome.com.

Memorials may be given to the Butte First Presbyterian Church, 901 W Platinum St, Butte, MT 59701.

To plant a tree in memory of Nellie Rosalyn Sherman as a living tribute, please visit Tribute Store.
© Copyright 2020 The Montana Standard, 25 West Granite Street Butte, MT | Terms of Use | Privacy Policy
Powered by BLOX Content Management System from TownNews.com.
You don't have any notifications.