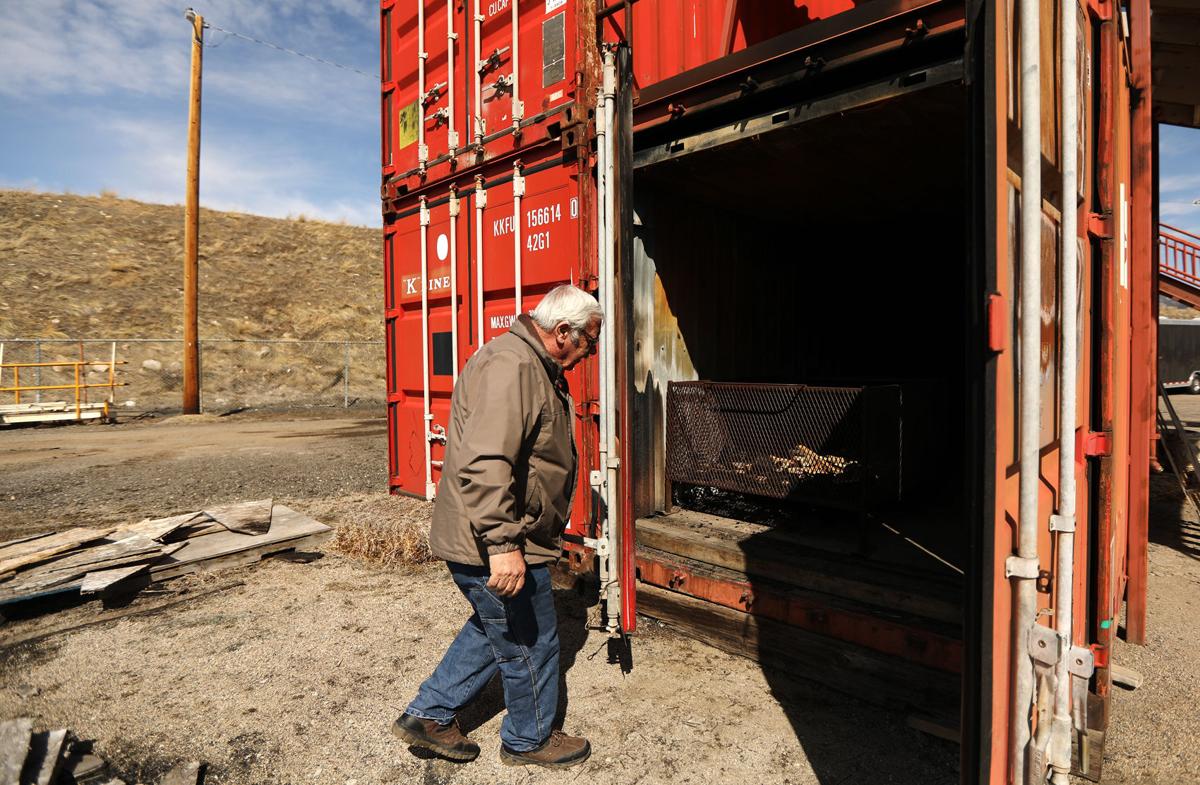 Ed Fisher opens a conex container used for firefighter training located on leased land adjacent to the old pole plant. Fisher grew up in the neighborhood and works as a volunteer firefighter. He and others have asked that the cleaned up land host the fire training center and office for all firefighters in the county. "We've been dealing with this for 25 years. It's been so long that we've lost trust (in the cleanup)," says Fisher. 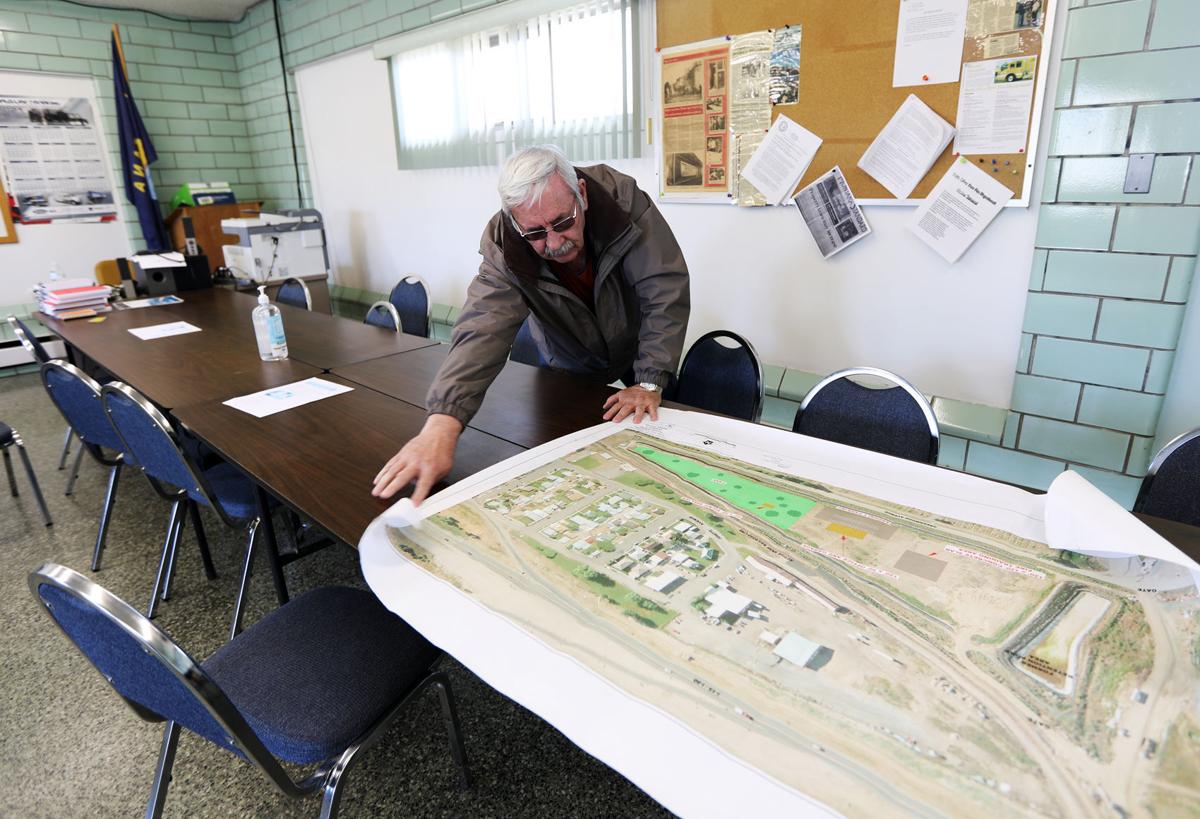 Ed Fisher unfurls a map of the proposed land use for the pole plant site. Fisher grew up in the neighborhood and works as a volunteer firefighter. 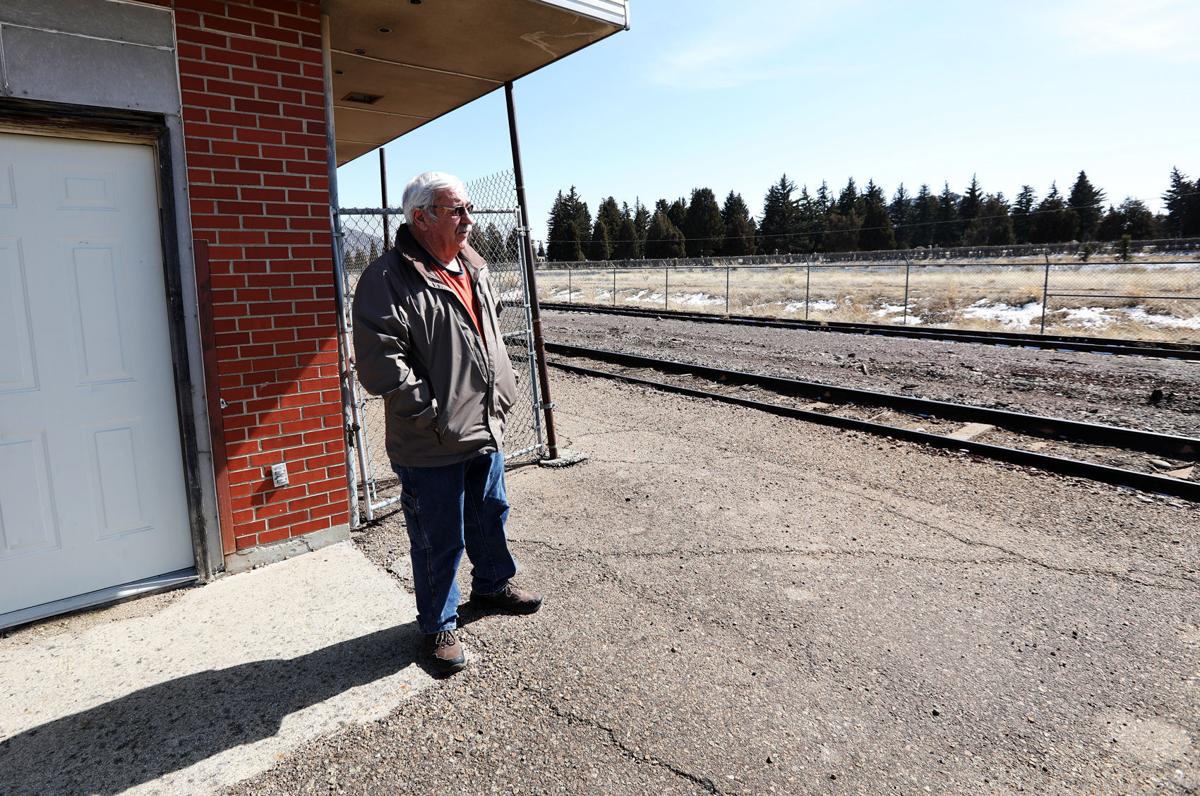 Ed Fisher, with the Boulevard Volunteer Fire Department and a resident of the neighborhood adjacent to the pole plant, is photographed behind the fire training office. Across the railroad tracks the contaminated soil from the pole plant is awaiting removal. "We've been dealing with this for 25 years. It's been so long that we've lost trust (in the cleanup process)," says Fisher.

Of the stakeholders presenting at the Environmental Protection Agency Region 8’s virtual Superfund meeting for Butte on Monday, the Montana Department of Environmental Quality had the most to report.

The DEQ on Monday finalized the Explanation of Significant Differences for the Montana Pole & Treating Plant Superfund site in Butte. The document was approved by the EPA, and construction of remedy is expected to start this summer.

The pole plant, located at Butte’s western edge on Greenwood Avenue, is unrelated to the other mine waste Superfund sites in Butte.

The 1993 Record of Decision on the project was updated with the ESD to change cleanup measures for chemicals at the former wood-treating facility. The updates included identifying stricter cleanup levels for contaminants pentachlorophenol and dioxin, as well as leaving a 9-acre landfill known as the Corrective Action Management Unit in place to deposit soils that do not reach those cleanup levels.

The lined and capped repository will be managed by the DEQ. In the repository, clean soil will top a waterproof plastic barrier housing the soils that do not meet the 2020 cleanup standards for the chemicals, a layer of previously backfilled soils, and groundwater bound for the water treatment plant on site.

The plan is to restore 27 acres of the site to standards safe for commercial, industrial or recreational use. Responses to comments in the document indicate the 9-acre repository area may be used for specific industrial uses, such as a field of solar panels, but not recreation.

Many took advantage of the comment period preceding the document’s approval, as detailed in the responsiveness summary. Many comments question the core effectiveness of the cleanup.

Critics said methods of biological breakdowns weren’t explored thoroughly enough before the manage-in-place-solution was adopted, and worried the site could contaminate groundwater as planned.

In a press release, Moira Davin, public relations specialist for DEQ, promoted the document as containing changes to the original cleanup plan “to make the site more protective of human health and the environment” and said the plan offers more protective cleanup levels for dioxin and other chemicals.

The levels are more strict, but soils that don’t reach those levels will be put into the capped repository under the ESD. When a community member questioned whether the net effect actually made the cleanup more protective, Davin said the cleanup plan would be subject to more public discussion in a series of upcoming meetings, but that the levels were more protective.

The Citizens Technical Environmental Committee will be briefly discussing the pole plant at its upcoming meeting on Thursday, April 8, and the DEQ plans a thorough presentation to CTEC sometime in May.

The DEQ will also present the plan at the next EPA community meeting on April 26 from 6 to 8 p.m.

The DEQ is also hosting a neighborhood meeting on April 20 from 6 to 7:30 p.m. to address potential concerns during the construction process—including dust, odors, and traffic—and how those concerns will be addressed.

The Williamsburg neighborhood sits directly to the west of the site, the Boulevard neighborhood to the northeast.

Ed Fisher, fire chief for the Boulevard Volunteer Fire Department, lives right next to the site, as do other members of his family. Fisher said the DEQ told him the work would be done in three to five years. Of course, that was over 25 years ago.

His family has been in the area for generations, and he’s seen a lot of DEQ personnel come and go without solving the problem.

Nonetheless, he’s assumed a leadership role representing his neighborhood at the community meetings over the years.

Even though the big changes to the plan are a done deal, signed by the EPA and everything, Fisher said he’s not counting his chickens quite yet.

“You can’t believe anything until they do it,” he said.

The effectiveness of the proposed cleanup — criticized by Montana Tech professors and Superfund watchdogs — isn’t Fisher’s top concern. He wants to see his neighborhood’s visions for the end land use come to fruition.

Over the years, he's seen DEQ drawings of a park on the property’s eastern end, and he wants to see those picnic tables, trees and a gazebo take form.

So far, he’s seen little progress made. He’s seen trees planted and then removed. He’s heard the waste would be moved to Utah and incinerated, and now it’s going to be kept in place.

He has, over the years when the soil was sprayed and tilled to reduce the toxins, put up with a sickening odor in his neighborhood. One of his neighbors moved away during the summer, it made him so sick, Fisher said.

The odor hasn’t been a problem for a few years now, he said, adding that workers have improved dust management (by keeping the work zones wet) over the years as well. Not that there’s been much work lately.

Looking forward, Fisher would like to see the nearby firefighter training center conex containers moved to the remediated pole plant property and the center expanded. He is hopeful that sewer lines and all other infrastructure necessary for the buildings to come will be assessed or installed before the property would be handed over to Butte-Silver Bow.

His top concern, he said, is traffic. He doesn’t want a batch plant or any other operation that will generate heavy commercial traffic built on the site.

End land use plans, construction details and the effectiveness of the plan will all likely be touched on during the various public outreach meetings scheduled over the next month.

EPA Region 8 project manager Nikia Greene said the area within West Side Soils initially prioritized for cleanup was north and west of Montana Tech, because there’s over 500 mine dumps in the area, in addition to other excavations.

County Commissioner Cindi Shaw represents District 11, and has been hearing from her constituents living in the West Side Soils Operable Unit behind Montana Tech, she said.

Shaw at the meeting said her constituents want to know where testing for contaminants is occurring. Greene said that for the soil, groundwater and surface samples taken so far, residents were contacted with results and offered a map of the samples.

Greene told Shaw that even residents outside the sampling areas could obtain a map of the sampling sites by contacting him.

For the location of future sampling sites in West Side Soils, there is a draft Quality Assurance Project Plan and a draft field sampling plan on the way, both containing maps where sampling will occur to fill data gaps, Greene said.

Greene said these plans will be made available to CTEC and the public.

In addition to the DEQ’s presentation on the pole plant, Atlantic Richfield liability manager Josh Bryson on Monday said the various Superfund stakeholders will be presenting updates to the medical monitoring program at the next monthly EPA community meeting at the end of April.

Ed Fisher opens a conex container used for firefighter training located on leased land adjacent to the old pole plant. Fisher grew up in the neighborhood and works as a volunteer firefighter. He and others have asked that the cleaned up land host the fire training center and office for all firefighters in the county. "We've been dealing with this for 25 years. It's been so long that we've lost trust (in the cleanup)," says Fisher.

Ed Fisher unfurls a map of the proposed land use for the pole plant site. Fisher grew up in the neighborhood and works as a volunteer firefighter.

Ed Fisher, with the Boulevard Volunteer Fire Department and a resident of the neighborhood adjacent to the pole plant, is photographed behind the fire training office. Across the railroad tracks the contaminated soil from the pole plant is awaiting removal. "We've been dealing with this for 25 years. It's been so long that we've lost trust (in the cleanup process)," says Fisher.