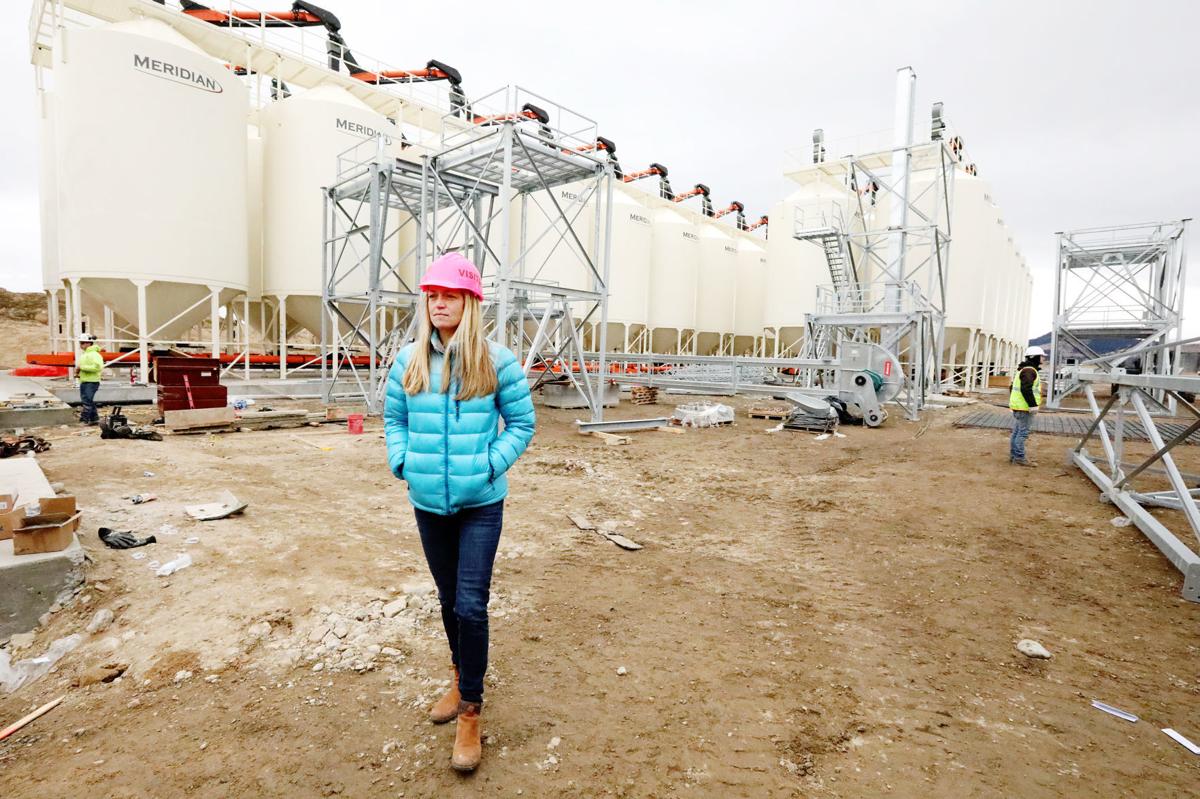 Jennifer O'Brien, president of Montana Craft Malt, stands near barley silos at the facility located on Rick Jones Way in the Montana Connections Business Development Park, west of Butte. The facility is in mid-construction and O'Brien says MCM is on track to open next year. 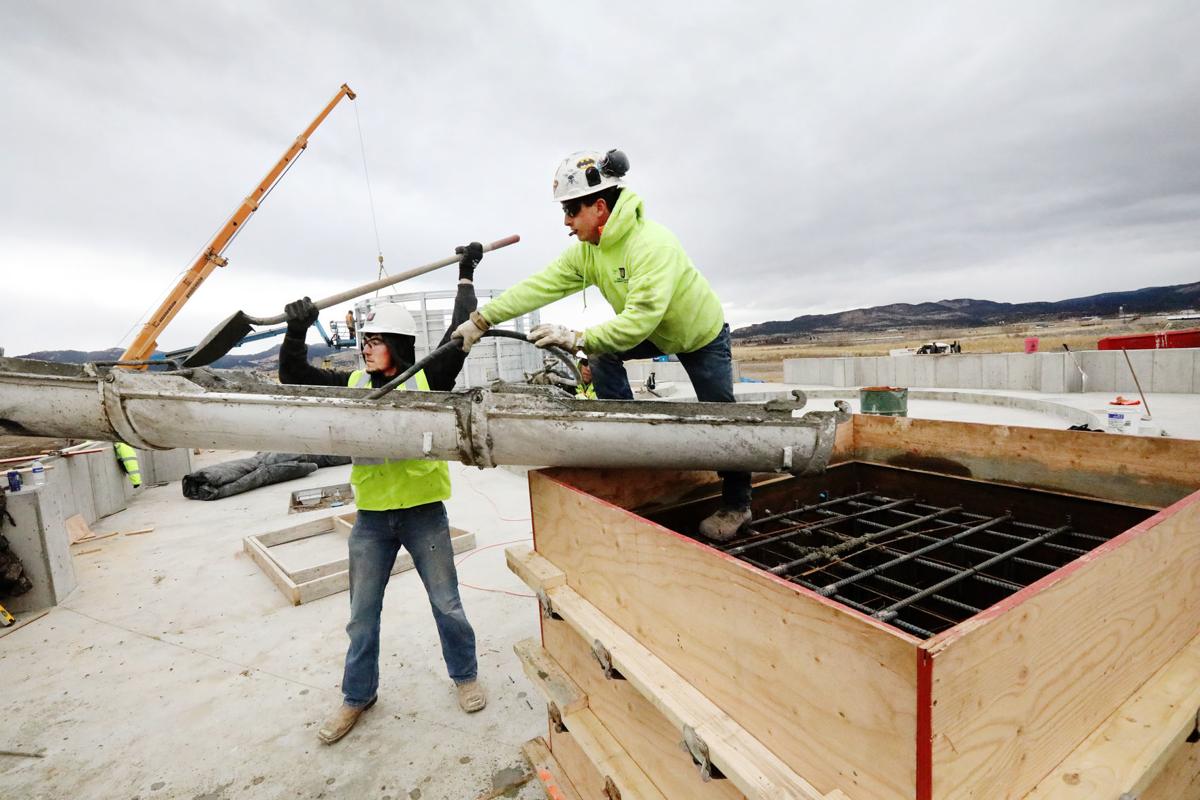 Jody Thomas, left, and Conner Sims of Dick Anderson Construction pour concrete at the Montana Craft Malt facility located west of Rocker in The Montana Connections Business Development Park. Construction on the facility is expected to wrap up in March.

Amid a cacophony of diesel engines and construction equipment, Conner Sims of Dick Anderson Construction climbs atop a wooden scaffolding, helping fresh cement move through a trough from a mixing truck.

With an unlit cigar hanging from the side of his mouth, Sims is helping to create one of the many structures that will turn a site in the Montana Connections Business Development Park west of Butte into one of Montana’s first mid-size barley-malting facilities.

When all is said and done, the malting company, Montana Craft Malt, plans to open its $15-million facility next year with around 15 employees and produce 10,000 tons of malt per year from Montana-grown barley.

MCM broke ground last spring, and construction on the 30,000-square-foot facility is expected to wrap up in March. Already the company is consulting with potential customers — craft brewers and distillers — according to the company’s new president and Ron Ueland's daughter Jennifer O’Brien, who took over the helm when her father died in May.

“It’s been a bumpy run but the endgame is the same and very clear to everyone involved,” said O’Brien on a tour of the emerging facility. “The story looks very different than we had initially anticipated, but it’s still a very good one.”

In the craft brewing industry, O’Brien explained, brewers want to differentiate themselves from other breweries, and they tend to like rare, heirloom and European varieties of barley. One of the goals of the facility, then, is to help brewers with that mission by providing them malts that appeal to their sensibilities and a product they can market as a locally grown, locally malted ingredient.

“It’s a really amazing team (and) it’s an amazing industry we’re operating within,” said O’Brien. “It’s hard, don’t get me wrong, but we’re having a ton of fun.”

O’Brien is now the face of the company, although it’s a role she didn’t anticipate.

Plans for MCM were announced January 2017, which was followed up by a press conference in a large ballroom at, fittingly, Butte Brewing, with Ron Ueland leading the show as the company’s then leader.

During the conference, several other investors were named, including O’Brien, Ueland’s brothers-in-law Bert and Mike Robins of SeaCast Inc. and Montana Precision Products, and many others.

Barley was familiar territory for Ueland.

He built a long career working in agribusiness, serving as president for WestBred LLC and president for Northern Seed Co., among other roles.

Reflecting on those leadership positions, Bert Robins said that one of the things that impressed him about his brother-in-law was his ability to connect with employees.

Ueland always seemed to know everyone’s name and had “a real personal touch.”

Robins said that some people who become successful in their careers become hardened from years of making tough decisions, “but I never saw any of that with Ron.” He had a lot of business savvy, Robins continued, and was also guided by a strong moral sense.

After the initial announcement of the facility, construction on MCM began in the spring, and everything seemed to go according to plan until Ueland's sudden death.

“It was a shock to everyone in my family and in the business, and I would say to the agricultural community in Montana,” said O’Brien.

When asked if she and other company leaders thought of discontinuing their plans for the facility, O’Brien responded, “not for one second.”

“It just wasn’t an option, isn’t an option… The vision is shared by all of us. We have a lot of skin in the game financially, time(-wise), and emotionally. And above all, the market is there for this. So at the end of the day it makes really good business sense.”

Ray Ueland, Ueland’s brother and one of his business partners in the redevelopment of the Metals Bank building on Park and Main Streets in Uptown Butte, described Ueland as an introvert guided by both logic and compassion.

Ray said his brother didn’t see age 65 as retirement age — instead, he felt as though he was just getting started.

The loss of Ueland isn’t just a loss for the family, Ray said, but is a loss for the Butte area and Montana — for surely his brother would have gone on to start other businesses built on the successes of his past and ongoing ventures.

O’Brien says she learned a lot from her dad, and seeing the malting facility through, in addition to it making good business sense, is a way of carrying on his father’s legacy.

“He was an exceptionally astute businessman,” she said. “I don’t pretend to aspire to that, (but) I’m using what I know and what I learned wrapped in a whole bunch of instinct.”

Ueland businesses live on in wake of leader’s unexpected passing

Ueland businesses live on in wake of leader’s unexpected passing

In May Butte and Montana lost one of its business leaders with the death of Ron Ueland.

Jennifer O'Brien, president of Montana Craft Malt, stands near barley silos at the facility located on Rick Jones Way in the Montana Connections Business Development Park, west of Butte. The facility is in mid-construction and O'Brien says MCM is on track to open next year.

Jody Thomas, left, and Conner Sims of Dick Anderson Construction pour concrete at the Montana Craft Malt facility located west of Rocker in The Montana Connections Business Development Park. Construction on the facility is expected to wrap up in March.