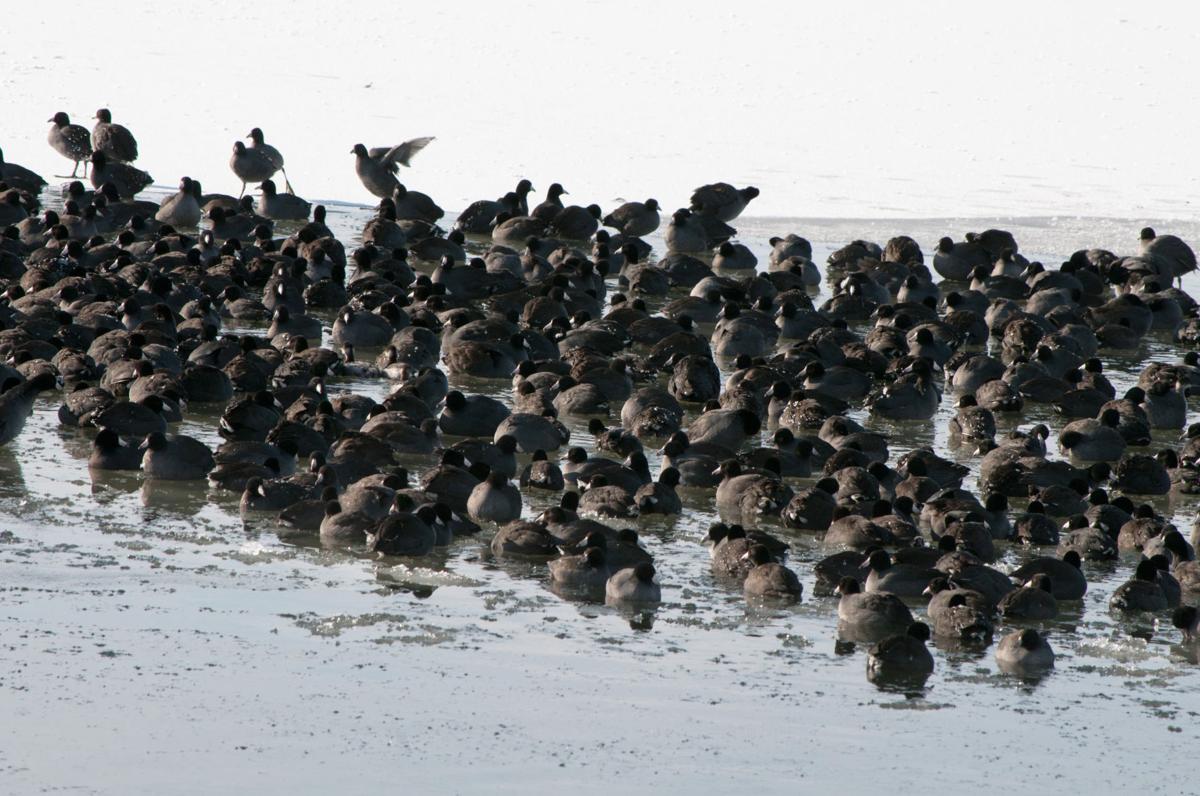 At least eight species landed in the Berkeley Pit in the Sept. 22 event. This included 650 American coots like those pictured here, 360 ruddy ducks, 150 of two grebe species, and less than 20 individuals each of four other duck species. Montana Resources was successful in getting all of the waterfowl out of the pit over a two-day period, with no mortalities, according to birding expert Gary Swant. 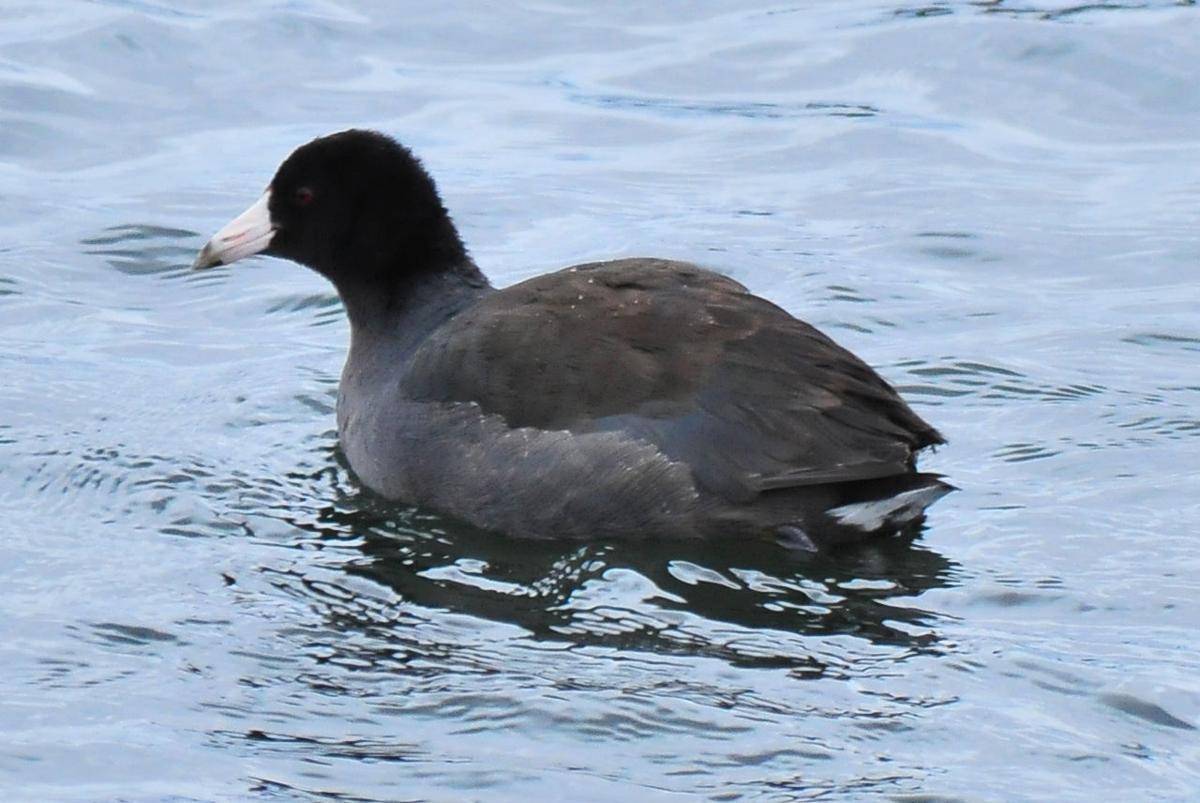 Pictured here is an American coot which was among the estimated 650 that landed on the Berkeley Pit on Sept. 22.

When people discover I am a birder, I often get questions about my opinions on the Berkeley Pit and migrating waterfowl. I have written this Montana Birding column to let you know what has transpired since the snow goose incident (where thousands died after landing on the pit's toxic waters) last November.

Montana Resources and Atlantic Richfield Company are committed to developing better protocols and practices to reduce/eliminate bird mortalities in the Berkeley Pit. To that effort, they contacted Montana Tech biology professor Stella Capoccia to form a migratory waterfowl mitigation advisory board. I am one of six members on that board, along with another dozen or so agency personnel from the Montana Department of Fish, Wildlife and Parks; Environmental Protection Agency; Montana Resources; Atlantic Richfield; Montana Audubon; and avian consultants who advise us before decisions are made. Our recommendations are not binding on Montana Resources and Atlantic Richfield, but those organizations take our considered opinion seriously and have implemented most all of our recommendations.

Our advisory board has two main objectives: first to minimize insofar as is practical the contact of waterfowl with waters of the Berkeley Pit and, second, to implement observation and hazing programs that are demonstrated and effective at getting waterfowl off the water as soon as possible.

As you can imagine, we have had a variety of ideas suggested to us to keep birds from landing. We have taken every suggestion seriously. Some are cost prohibitive such as covering the waters of the pit with plastic balls. That turned out to be a $76.5-million idea with the unintended consequence of reducing evaporation from that water’s surface, which is needed to manage current water levels. It would take an estimated 240,000,000 balls and four years to produce them. Others have suggested a net, but the walls are not stable enough to support the cabling that would be required to support a net. Another suggestion was to color the water, but there is little research to suggest which color to use or if all waterfowl species respond to the same color in the same way. We also have no idea how much coloring it would take or how it would react with the water of the pit.

What we have settled on as our primary prevention method is good communication between Montana Resources and other wildlife refuges in Montana and Canada for the fall and refuges south of us in the spring. This will allow MR to know that waterfowl are coming so they can be better prepared than they were last November. We are also using bird experts in the Upper Clark Fork, Helena Valley, and the Great Falls/Freezout area who monitor local waters, wildlife management areas, and refuges for migrating species. Thousands of migratory birds pass through the Upper Clark Fork River Basin on their way south in the fall, and preliminary data suggests that species seen at the Warm Springs WMA are a good indicator of the number and species that pass through Butte and could potentially land on the pit.

We have also employed the expertise of a meteorologist, who provides information about weather patterns that might bring waterfowl into the Upper Clark Fork River Basin and potentially into the Berkeley Pit days ahead of an event.

We have developed a bird guide with the 42 most likely occurring species and trained Montana Resource personnel on the use of the guide. We are hoping that if MR personnel, who monitor the pit, can identify the waterfowl that land by species, we can then develop hazing protocols that are specific and effective for that species.

The pit waters are observed every hour for waterfowl by MR employees during the migration season as well as mornings and evenings by a graduate student from Montana Tech. If an “event” of more than 250 birds is observed, I then go to the pit and make sure that we have properly identified the species involved.

So far this fall, we have had one event in which nearly 1,200 waterfowl landed on the Berkeley Pit. They were found Friday morning, Sept. 22. In the days before this event, we had a much-needed rain/snow storm pattern that put out many of Montana’s fires and triggered migration of these waterfowl.

I was able to identify eight species in the pit in the Sept. 22 event. Six hundred and fifty were American coots, 360 ruddy ducks, 150 of two grebe species, and less than 20 individuals each of four duck species.

Around 9:30 a.m., MR fired shots at the ducks, and they took flight and quickly returned to the water some 50 yards away. From that experience we concluded that the birds were fatigued and we would only stress them more if we continued to haze them. We especially did not want to haze the American coots or the grebes, as they respond by diving, which would increase exposure to the pit water. Thus the waterfowl were allowed to rest until near dark. At that time we used a remote controlled fixed wing (100-inch wingspan) plane and flew over the waterfowl with disappointing results. I had expected them to fly, and they did not.

What did work was to use lasers and move the beams quickly over the rafts of birds. The lasers seemed to agitate the rested birds, and they began to lift off the water. This was followed by pyrotechnics that exploded into several light flashes and loud noises over the birds. We were not able to evaluate the results as well as we wanted due to darkness, but we felt the majority of waterfowl lifted off the pit.

The next morning, Saturday, less than 150 birds were present, and due to the species present and numbers, we suspected they were new birds that arrived overnight and not the birds from the previous day. On the second evening, we again used lasers and pyrotechnics, and on Sunday morning, no waterfowl were in the pit.

We were successful in getting all of the waterfowl out of the pit over a two-day period, with no apparent mortalities. We strongly suspect that we were able to get waterfowl off the pit in less than 24 hours, if the waterfowl on the second morning were new birds.

So what has MR, Atlantic Richfield, and the advisory board learned so far? Fatigued waterfowl need to be given some time to rest before hazing efforts are effective. We suspect that different species need different hazing protocols. We also know that lasers and pyrotechnics used together seem to be effective and that weather plays a large role in when birds migrate and if they will land in the pit.

Will there be other events this fall? In my opinion, most likely. Will we be as successful as we were in this first event? We hope so, but there are no guarantees.

But rest assured that we on the advisory council, Montana Resources, and Atlantic Richfield are working hard to preserve good-paying mining jobs and protect the waterfowl that migrate through the Upper Clark Fork River Basin.

We are still in the preliminary stages of preventing birds from landing and have purchased equipment that shows promise, but that equipment has not been adequately tested.

We live in a wonderful state that has a combination of mining, agriculture, and recreational resources. As stewards of this state, we must balance our resources and our environmental concerns. With hard work and a goal to have all of these entities be healthy in Montana, we look forward to solving the problems created by the Berkeley Pit for migratory waterfowl species.

I hope that you have found this article informative and reassuring. In the future, as we test new protocols and preventive methods, I will inform you again on the status of migratory waterfowl species and the Berkeley Pit waters.

Gary Swant of Deer Lodge taught biological sciences at Powell County High School for 25 years. After retirement, he founded GoBirdMontana, www.gobirdmontana.com, an environmental consulting and bird guide service. He can be reached via email at birdmt@charter.net. This column features bird species of the Upper Clark Fork River Basin from Butte to Garrison. Swant hopes the column will inspire people to take an interest in observing birds.

The estimated 3,000 to 4,000 snow geese that perished in December 2016 in the Berkeley Pit’s toxic water died of both heavy metals and sulfuri…

New drones scare off more than 1,000 birds on the Berkeley Pit

Montana birding: Bluebird is one of nature’s finest

Everyone knows what a bluebird is. There is even a bluebird society in Montana. I had the privilege of being the keynote speaker at their annu…

White geese were in the news last November with the tragic death of many in the Berkeley Pit.

Last month I published an article on the sighting of a rare bird in the Butte area, a boreal chickadee.

At least eight species landed in the Berkeley Pit in the Sept. 22 event. This included 650 American coots like those pictured here, 360 ruddy ducks, 150 of two grebe species, and less than 20 individuals each of four other duck species. Montana Resources was successful in getting all of the waterfowl out of the pit over a two-day period, with no mortalities, according to birding expert Gary Swant.

Pictured here is an American coot which was among the estimated 650 that landed on the Berkeley Pit on Sept. 22.