Two days after Montana Territory was established in May 1864, the territorial capital was set at the mining camp of Bannack. It wasn’t a stretch to say Bannack was almost the only game in town, in terms of a city, so it’s no great surprise the capital was established there. But it lasted in that role for less than a year.

The gold mining and the territorial capital moved 65 miles east to Virginia City on February 7, 1865. Although Virginia City thrived for five or six years, with a peak population in the area of around 10,000, by 1875 the gold was gone and the population was down to a few hundred. The Territorial Capital was moved to Helena following a contested and disputed vote.

Fifteen years later, in 1889, Montana became a state. It was not a foregone conclusion that the state capitol would remain in Helena, and in fact the question was put once again to a vote of the people. If the Virginia City versus Helena choice for Territorial Capital was fraught with corruption, the choice of the permanent state capital was one of the most corrupt elections in U.S. history.

The first election, in 1892, was a choice among seven Montana cities, Anaconda, Boulder, Butte, Bozeman, Deer Lodge, Great Falls, and Helena, the seven that managed to qualify for the ballot. White Sulphur Springs and Pony also applied but didn’t make the cut. A field of seven almost guaranteed that no city would win a majority as required by law, and when the day was done out of 46,000 votes cast, Helena had the most at 14 thousand with Anaconda second at 10 thousand, so they were pitted against each other in a runoff election in 1894.

That election became political theater dominated by the feuding copper kings, Marcus Daly for his company town of Anaconda versus William Clark’s adopted Helena. The politically controlled press offered up page after page of invective for and against each city.

For example, a booklet by Charles Eggleston, associate editor of the Anaconda Standard, offered a satirical comparison. Men who wear silk hats: Anaconda 3, Helena 2,625. Quarts of champagne in daily use: Anaconda 2, Helena 1,245. Beers in daily use: Anaconda 8,854, Helena 4,088. The intent was clearly to cast Helena as an elitist, millionaire’s town in contrast to the working-class families of Anaconda, and more important because of the much greater population, Butte.

Bribery and corruption were rampant, including gifts of barrels of whiskey to miners coming off – and going on – shift, and $5 “election tickets,” which were just five-dollar-bills attached to a notice for how the recipient should vote. Butte miners held the balance because despite Anaconda’s dominance, Clark still controlled many mines in Butte, and he was supported by the Boston & Montana company, second only to Anaconda in Butte copper production.

The final reported vote was 27,024 for Helena and 25,118 for Anaconda, a win for Helena by less than 2%. By some estimates, at least 1,000 more votes were counted than there were registered voters in the state in November 1894. 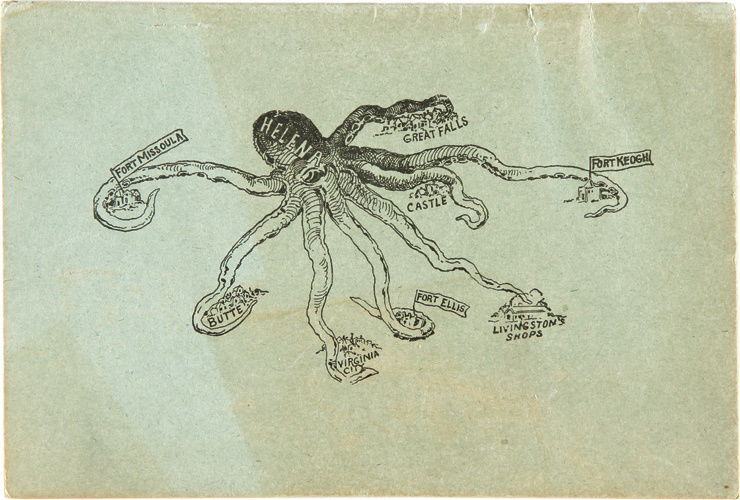