During the summer of 1939, photographers with the Farm Security Administration (which became the Office of War Information) fanned out across America to document the nation, especially rural and small-town America, in the recovery from the Depression and the initial phases of World War II. Photographers amassed about 175,000 black and white images, including several hundred in Butte.

Arthur Rothstein’s photo of the “Entering Butte” sign is one of those iconic photos. The location is the 1000-1100 block of East Park — East Galena Place — East Galena, where they intersect Parrot Street, spelled variously with one or two “t’s”. Parrot is the street behind the sign, but US Hwy 91 cut through there at an angle to the streets and this sign is on Hwy 91 at the city limits, looking northwest to the point where Highway 91 merged into Parrot Street. At right are the back sides of a string of houses along East Galena Place (sometimes called “Upper Galena”), which was immediately north of U.S. Highway 91 where it ran northwest from East Talbot (the extension of East Mercury) and followed Parrot up to Park.

This is the East Side-East Butte neighborhood, not Meaderville, not McQueen. The area is pretty close to where the Pit viewing stand is today, or a bit toward the pit from there. The mine at far right behind the shacks is the Pennsylvania Mine complex, which is within the pit today. The mine in the distance, right of the word “Butte” in the sign, is the Anaconda Mine (also within the pit today), and the St. Lawrence and Mountain View Mine complexes occupy the near distance and skyline just to the right of center.

The East Side Volunteer Fire Station is the newer-looking building to the immediate right of the word “limit” on the sign. It stood at the corner of Galena Place and Parrot where it occupied the former Arc-Light saloon that was there in 1916. The Fire Station was later expanded but it was torn down in October 1965 as the Berkeley Pit expanded.

The Mobilgas service station at center was at the corner of East Park and Parrot.  The sign at right says “If he is not at the Arcade, he is not in Butte,” a reference to the prominent saloon, the Arcade, that occupied the ground floor of the Lizzie Block, a three-story building at the northwest corner of Park and Main in the Uptown business district.

King and queen of the 2021 Butte Central High School prom are Lewis Icopini and Mati McGree. 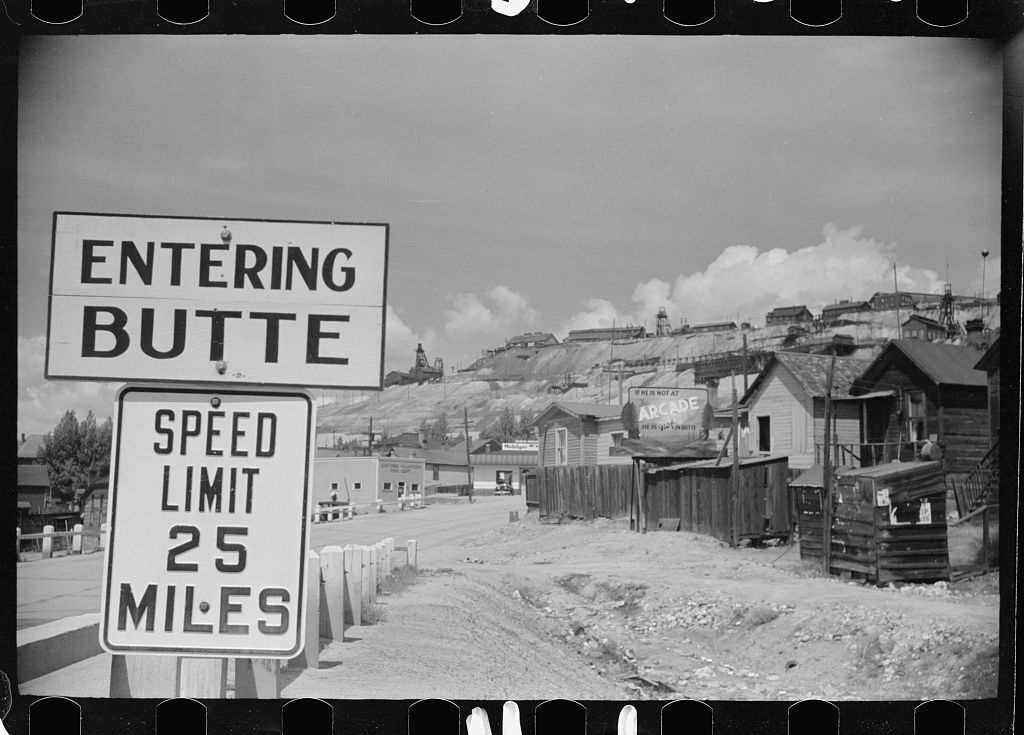