Greeley School was built along with many others in Butte as a response to the exploding population in the late 1890s. First through eighth grades were taught at Greeley in its early years. The staff at Greeley in 1905 and 1910 reveal a diversity of origins — and residences scattered all over town.

In 1910, only one teacher from 1905 was still at Greeley. The principal was Kate Stafford, and teachers were Anna Sennett, Elsa Fasel, Mary Harrington, Ada Myersick, Fannie Spooner, Alice Maguire, and veteran Kathleen McDonald.

Alice Maguire lived at 807 W. Galena with Mary (widow of John), Nellie, and Grace. Perhaps Mary was the mother of three sisters, all of whom were teachers. Anna Sennett of 411 W. Quartz, lived with Helen Sennett, a teacher at Emerson, along with other Sennetts: James, a clerk at Hennessy’s; John, a miner; Mary, a stenographer; and Nora (widow of Michael), who ran the grocery at 306 N. Jackson. 411 W. Quartz was a busy place for such a small home!

Third-graders at the Greeley School in 1905 were to be able to answer these questions:

How were the canyons and gulches formed? What would the level valley south of town indicate? What are sand, clay, loam, alluvium? The City School Superintendent noted that some of the most common properties of the minerals (quartz, feldspar, and mica) could be taught to third graders “with profit.”

On the subject of language, “The chief result to be obtained from the study of language is power of expression rather than a knowledge of grammar. The power of expression, however, is useless unless one has something to express. In this branch of work it follows, therefore, that the activities are two-fold, (1) the getting of knowledge, and (2) the proper facility in giving expression thereto.” Third-graders would read "Robinson Crusoe."

Greeley had served as a community center for several years before it closed in 2004. After several more years of discussion among the Butte School District, county commissioners, and the Public Housing Authority, with nothing coming of it, in 2013, the school was sold to Doug Ingraham, who plans to try to save the historic building and return it to viable use.

In "Sweet Thunder," Ivan Doig describes a celebration of poet Robert Burns's birthday, held at the Butte Public Library. Although that account…

Charlie the dog: A soothing fixture at the Anaconda-Deer Lodge Courthouse

Tommi Howell was fretful about calling the police when she saw a man tearing through the toxic, off-limits “red sands” in Anaconda in a pickup…

The loss of renowned chef Anthony Bourdain has struck a chord with management at the Pekin Noodle Parlor.

Beau Downing reached into Bear Trap Creek and picked up a rock, turning it over and examining it closely until he found the collection of black specks he was looking for. 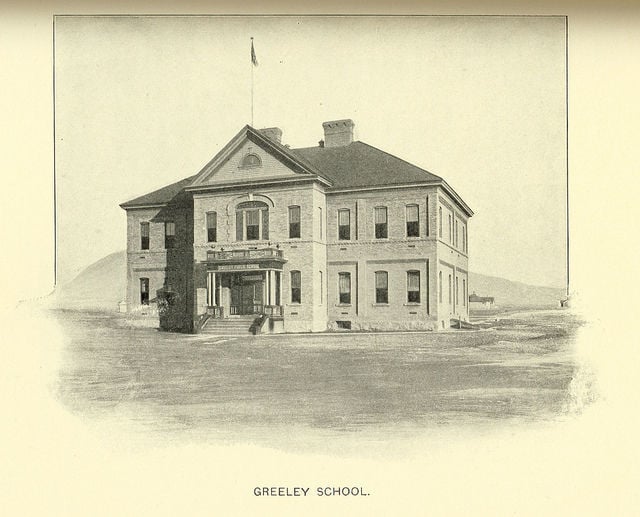 Image from Annual Report of the Board of Education and City Superintendent of Schools, Vol 18., 1905.