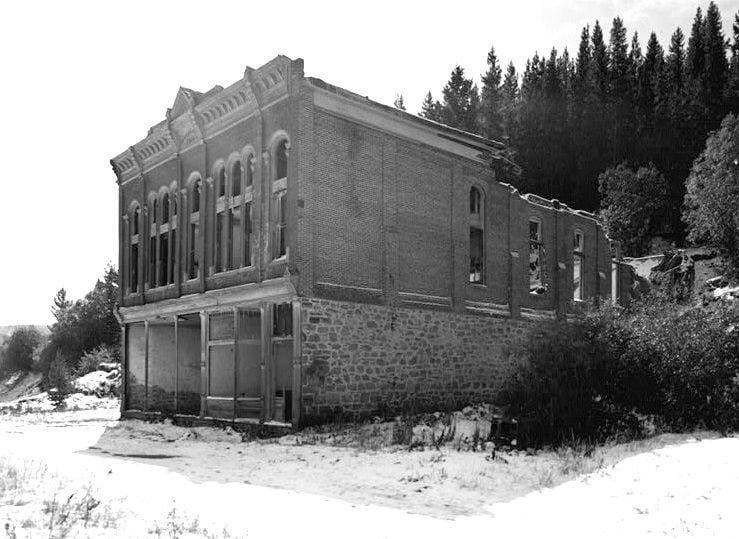 Portions of the Miners Union Hall still stand in Granite, seen here in 1965. The last remaining resident of the town passed away in 1969.

At its height in the 1880s, Granite and its outskirts counted 6,000 residents, though today little but foundations remain. The first silver discovery near what became Granite, a few miles up in the hills above Philipsburg, was in 1865, but it wasn't until 1882, with $130,000 backing by St. Louis investors, that the greatest silver bonanza was found and the town really began.

By 1889, Granite’s mines were producing more than $250,000 in metals—mostly silver—each month. The population of “Montana’s Silver Queen” grew to about 3,000 by 1890, with an estimated equal number residing in the vicinity nearby. A miner’s union was formed in 1888, 10 years after the first union formed in Butte. The town boasted a library, 18 saloons, brothels, a hospital, school, four churches, a local newspaper, and its own Chinatown.

Repeal of the Sherman Silver Purchase Act in 1893 brought about a crash in silver prices, and the population fell within a year to fewer than 150. Occasional rejuvenations over time brought influxes of small numbers of residents, but Granite never regained its late 1880s glory. The most important reactivation was from 1898-1904, when the combined Granite Mountain and Bi-Metallic Mines produced $1,000,000 per year—to add to the 1883-1898 estimated total of nearly $30,000,000, mostly in silver. Most mining operations had ceased by about 1912, though sporadic attempts to mine the lodes continued until 1958, when most of the Bi-Metallic Mine buildings burned. The last sole resident died about 1969, and today the site is a Montana State Park.

Much of the ore from the Bi-Metallic Mine was milled downhill, two miles southeast of Philipsburg at the 100-stamp Bi-Metallic Mill, built in 1889-1890. Remnants of the cable-rigged tramway that carried the ore are visible along the road up to Granite. When it was built in 1889, this was the longest aerial tramway in the United States, at 9,750 feet long and with a vertical drop of 1,225 feet.

Georgetown Dam, built in 1899-1901, was constructed to provide power for the Bi- Metallic Mill and the Granite Mine. Today the lake is an important recreation area and expensive summer homes line its shores. Fortunes based on Granite’s silver mines financed significant construction in St. Louis, Missouri, home to the original major backers of the mines. Merchant’s Bridge (1889), Planters Hotel (1894), Terminal Railway of St. Louis (1889), and the St. Louis Bank of Commerce (1890s) all are rooted in the wealth generated by Granite’s silver.