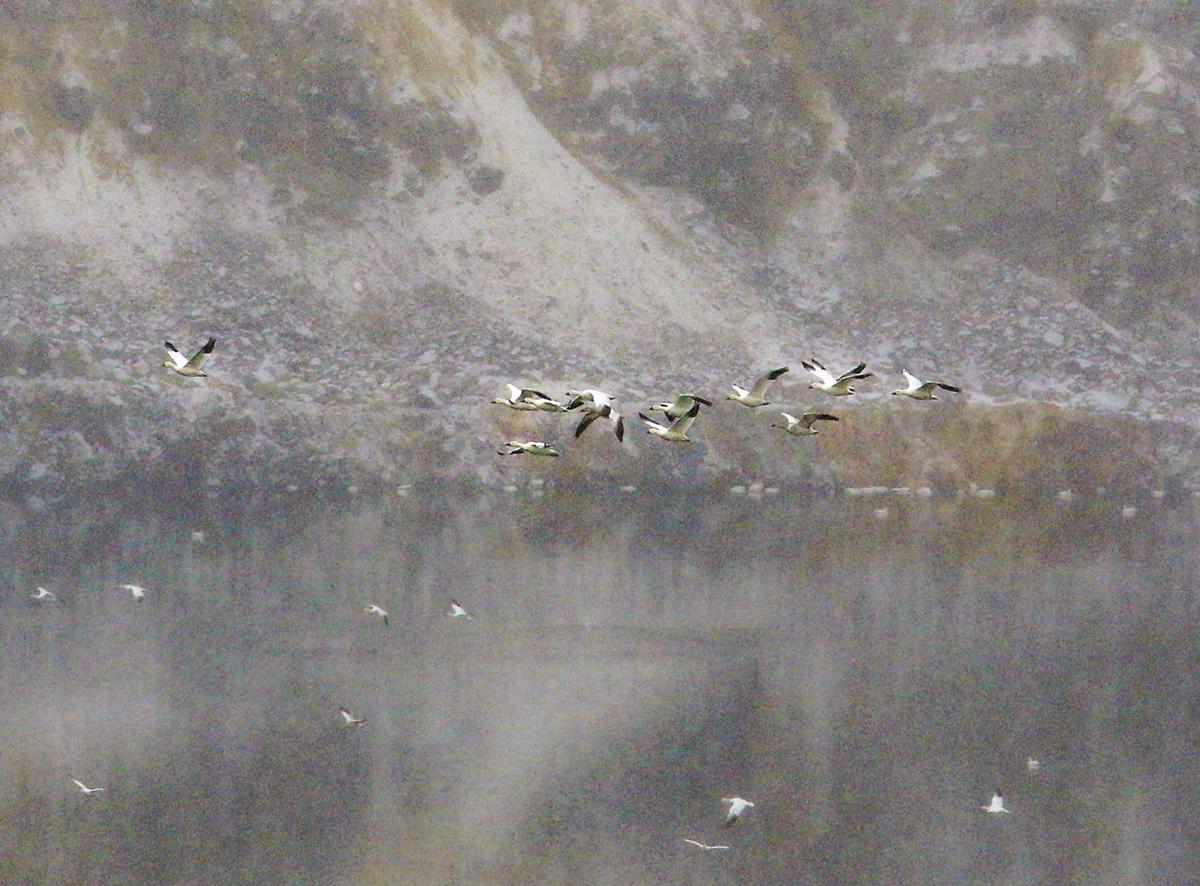 In this file photo, groups of snow geese respond to repeated hazing by Montana Resources during the week of the fateful landing that took place the night of Nov. 30, 2016. In a recently released necropsy report provided by U.S. Fish and Wildlife Service, the 3,000 to 4,000 birds that perished in the pit died due to both heavy metals and sulfuric acid exposure. 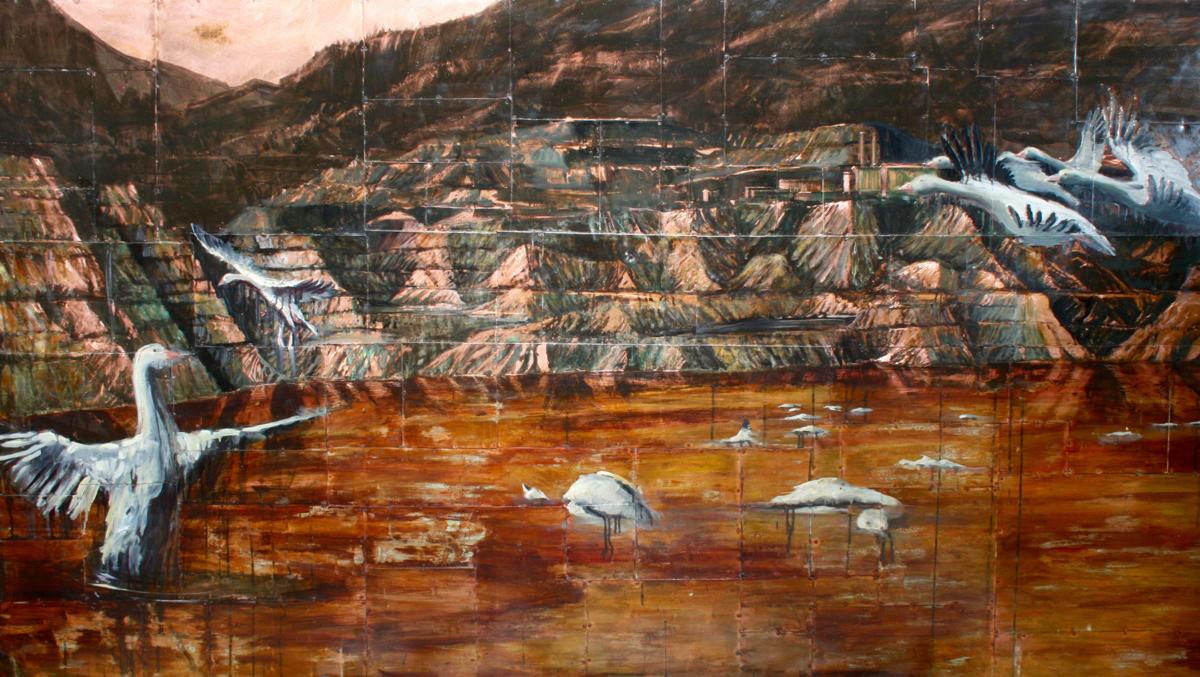 The estimated 3,000 to 4,000 snow geese that perished in December 2016 in the Berkeley Pit’s toxic water died of both heavy metals and sulfuric acid, according to U.S. Fish and Wildlife Service spokesperson Ryan Moehring.

The necropsy report does not make the findings clear, stating only that lesions in the stomach, intestines, and throats were severe and “suggestive of chemical tissue damage induced by a corrosive substance.”

Copper and zinc, both of which were found inside the birds’ stomachs, could have been the cause or a contributing factor in the lesions, according to the report. Other metals, including manganese, were found in the organs of the geese.

Montana Resources manager of environmental affairs Mark Thompson said the report’s findings that the metals and acid in the pit caused the bird mortalities came as no surprise.

“There was never any suspicion the birds died from some other cause besides pit water,” Thompson said.

The companies responsible for the pit, Montana Resources and Atlantic Richfield Co., could be fined as much as $5,000 per bird. Helena-based U.S. Attorney spokesperson Melissa Hornbein said the U.S. Attorney’s Montana office cannot comment yet on whether the companies will be fined.

The report says 18 birds were tested. Two of the birds were different species of duck. The other 16 were snow geese.

One bird the lab tested was shot in Dillon. That bird died of the gunshot wound. A captured and treated bird, which died after capture, was also sent to the necropsy lab. That bird showed inflammation and bacteria internally in addition to internal damage caused by metals and sulfuric acid. The infection may have contributed to that bird’s death, according to the report.

The report says the birds’ condition was similar to the 342 snow geese that died in November 1995 when a flock landed — almost 21 years to the day — on the pit during a snowstorm and perished. Those birds were found dead by a Bureau of Mines and Geology employee who returned to the pit’s toxic water within a few days to take water samples after the storm passed.

When a winter storm encouraged the birds to land in 2016, an estimated 10,000 birds found a resting spot on the Berkeley Pit, but thousands of birds flew off over the course of a week. A Bureau of Mines and Geology water sample report taken in December of last year found the pit’s water to be less acidic than it was in 1995.

Earlier this year the companies put together a bird advisory committee and hired Montana Tech professor Stella Capoccia to advise on new ways to prevent birds from landing and dying in the pit in the future. The companies are testing new technologies this spring. In addition to propane-powered canons already stationed around the pit, the companies are bringing in later this month a device that shoots out rings of compressed air that scare the birds, Thompson said. The companies hope to have a fully vetted plan in place by fall to prevent another die-off. The plan will have to get federal and state agency approval.

The news from the necropsy report comes just in time for a bird mourning event hosted by the Clark Fork Watershed Education Program and Butte’s Citizens for Labor and Environmental Justice. Taking place from 3 to 6 p.m. Saturday at the Knights of Columbus's upstairs ballroom, the event is a fundraiser for CFWEP, which seeks to educate the region’s youth on the local environment. Event spokesperson Mary Kay Craig said there will be art, music, poetry, presentations, and snow geese commemorative items for sale.

Craig said the event is intended to help the community of Butte heal.

“The purpose is for people to acknowledge the horrible way these creatures died and get some closure,” Craig said.

When people discover I am a birder, I often get questions about my opinions on the Berkeley Pit and migrating waterfowl. I have written this M…

As 2017 comes to a close, we look back at some of the most important, interesting and unusual stories this year in the Mining City.

“HOPE for Snow Geese,” a musical, artistic Earth Day event, is slated 3 to 6 p.m. Saturday, April 22, at the Knights of Columbus Hall, Park an…

An attempted remote-control boat launch at the edge of the Berkeley Pit was scrubbed Wednesday afternoon.

The Environmental Protection Agency gave the OK Friday for Montana Resources and Atlantic Richfield Co. to begin hazing birds off the Berkeley Pit.

HELENA — After thousands of snow geese died in the toxic water of a former open-pit mine in Montana last fall, the companies responsible for t…

EPA: It's safe to eat snow geese that landed in pit

Hunters who shot snow geese in southwest Montana the week of Nov. 28 — when thousands landed and died in the Berkeley Pit — can safely consume…

A free Earth Day event raising awareness of the snow geese that perished in the Berkeley Pit last year runs 3 to 6 p.m. Saturday, April 22, in…

A man described by police as having a mental disorder jumped the fence at Montana Resources and waded into the Berkeley Pit, according to police.

Sonic boom test successful Tuesday, another planned for Wednesday at the Berkeley Pit

A sonic boom that will blast at the rim of the Berkeley Pit at 10 a.m. Wednesday will cost Montana Resources and Atlantic Richfield Co. $4,500…

New drones scare off more than 1,000 birds on the Berkeley Pit this weekend

Although nearly a year has passed since around 3,000 snow geese perished on the Berkeley Pit, the Environmental Protection Agency has not deci…

In this file photo, groups of snow geese respond to repeated hazing by Montana Resources during the week of the fateful landing that took place the night of Nov. 30, 2016. In a recently released necropsy report provided by U.S. Fish and Wildlife Service, the 3,000 to 4,000 birds that perished in the pit died due to both heavy metals and sulfuric acid exposure.